O brother, where art thou? South Africa’s xenophobic violence and fear of the Other 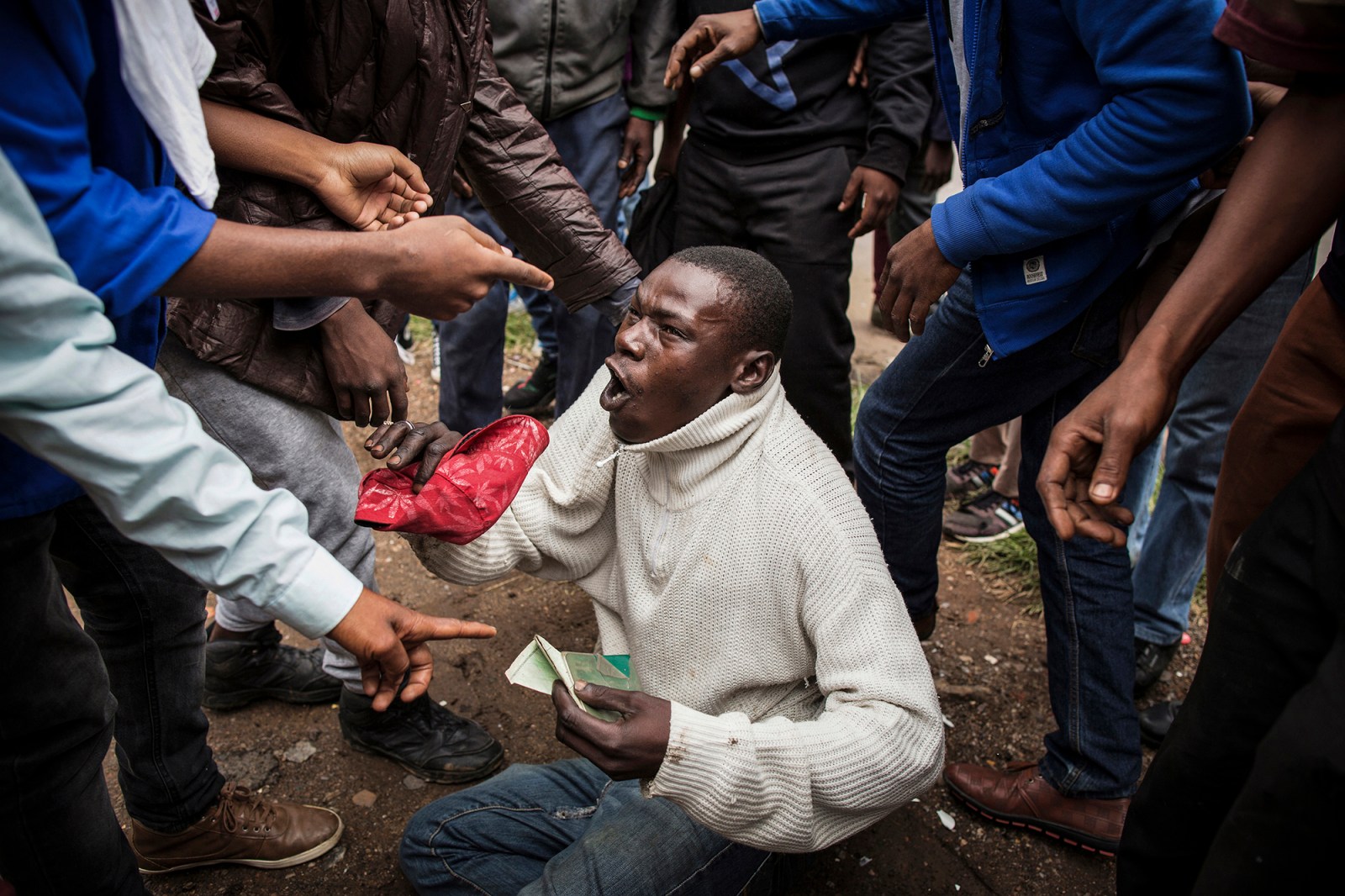 A man produces his South African identity document after being attacked by a group of men. (Photo: James Oatway)

Photographs rendered apartheid visible, helping to make the world aware of it and to spur resistance. A new book does the same for the plight of often persecuted migrants in South Africa, where they are blamed for social and economic ills.

Whose stories are told – and whose are obscured? Who is allowed to be visible – and who is erased? Photography entails more than record-keeping. It engages processes of worldmaking that organise how we understand our worlds, and ourselves, and how we engage with our communities. By engaging our attention on certain sites and away from others, it frames what and who are worth seeing. In this way, the photographer helps produce a public knowledge about who should be made visible.

South Africans know this acutely, for photographers, some of them heroic, some at cost to their own lives, made apartheid visible. Targets of xenophobia are subjected to the violence of estrangement. Xenos: the stranger, the outsider, the “alien”. To be called xenos, to be made xenos, is to be categorised as illegitimate – to be pushed beyond the bounds, beyond citizenship, beyond moral concern.

These categories accrue. They come to justify enactments of violence against bodies that are present, that are real, that are living, but do not belong.

South Africa has experienced brutal cycles of xenophobic violence. These have led to horrific murders, and to displacement of thousands of cross-border migrants, mostly from our own continent, Africa. Worse, they have led to fear and suspicion and terror. They have torn at the cloth of our constitutional inclusiveness, shredding and tattering it.

The most recent wave began in late August 2019. There was a resurgence of anti-migrant protests, looting of foreign businesses and assaults: bodies stoned, beaten, burned and killed.

There is a conspicuous race and class edge to this. The white cross-border migrant in an affluent haven like Sandton will fear no criminality beyond the ordinary. Five kilometres away, in Alexandra township, the black African cross-border migrant may be in fearful peril of her life, her livelihood.

Our leaders have responded by predominantly labelling xenophobia a crime. This is true. In an obvious sense. But also only partly true. The bigger, more horrendous truth is that it is crime with an edge – an anti-migrant crime, an anti-African migrant crime. The typology evidences denialism. As with our Aids epidemic, denialism springs from shame. There, the shame of the virus, of infection, of its mode of transmission, was unwarranted. Here, the shame is rightful. Shame that we turn against our own, our African own.

Of course there is a problem – here, in Europe, in the Middle East, in Asia, in the Americas. The problem is resources and their allocation in conditions of scarcity. Across party lines leaders have urged tighter border controls. They contend that cross-border migrants undermine South Africa’s socioeconomic development Some have openly campaigned for undocumented migrants to be detained, in camps.

Why? Fear. Fear of the Other, the intruder. Fear that African migrants will eventually take control, take our country. Yet, allegations that migrants are disproportionately responsible for crime and that they drain public resources by claiming undue government support lack evidence. Still, the words lawlessness, human traffickers, drug dealers, thieves become metonyms for “migrant”; our words shift between vocabularies of migration and criminality as though there is no boundary between the two.

The cross-border migrant is not a politically neutral figure. She bears the marks of our country’s colonial and apartheid past. Yet, xenophobic violence seems reserved for poor black immigrants from Africa.

Our country’s official policy on international migration catalogues immigrants into categories. These distinguish between those who can and cannot contribute to our economy. These classifications designate only the exceptional, privileged and productive bodies as worthy of welcome. The inerasable fact that we are regionally and continentally interdependent is somehow erased.

Faced with inequality and unemployment, many seek to claim resources through the regime of citizenship. This is understandable. But it positions foreign nationals as undeserving of the rights owed to South Africans. Rather than constituting a direct physical harm, the mere presence of the migrant is imagined as the greatest danger since it threatens economic security and access to scarce resources. The African migrant is dangerous simply because she exists.

Yet, our Bill of Rights knows the difference between migrant and non-migrant. And it categorises them carefully, and respectfully. Apart from its entrenchment of citizenship itself (sections 3 and 20), the Constitution requires citizenship only for the vote (political rights, section 19), freedom of movement and residence (section 20(3)), a passport (section 20(4)) and freedom of trade, occupation and profession (section 22).

Beyond these, the rights in the Bill of Rights protect everyone within our borders equally. It is on this granite that the architecture of the Constitutional Court decisions on migrants is founded.

Despite pleas from local civil society organisations, international and regional bodies, and other African governments, we continue to hush xenophobia with denialism. The migrant becomes a hypervisible substitute for our failure to respond effectively to our history of subjugation. Yet, simultaneously, we erase the migrant from our understanding of violence, as xenophobia is subsumed into a narrative of rising crime.

Rather than a danger posed to individuals, xenophobia becomes lost in growing statistics of assaults, murders and robberies. Dismissing xenophobic violence as mere criminality obscures the hard fact that we have failed adequately to address our country’s structural legacies of Othering and, with this, the socioeconomic conditions that provide the seedbed for violence.

Migrants are blamed for the daily hardships experienced by poor South Africans. By refusing to articulate what they experience as xenophobic, we are left without the reflective means to question the colonial histories and political failure that reinforce anti-immigrant attitudes, and that continue to structure our engagement with the Other within our country.

What we choose to frame shapes the personal and political responses available to us. Photography retrieves these bodies. It documents how our own Othering heightens the precarious status of certain groups. This book, by two distinguished, award-winning South Africans, makes the Other present and visible to us. Poignantly and often troublingly so. Sometimes magnificently so. This work by James Oatway and Alon Skuy instigates us to reflection, and discussion, and ultimately to action. This starts by positioning the cross-border migrant as central to a meaningful response to xenophobia. Most importantly, it dignifies imperilled bodies by allowing them to be seen. From there, we challenge ourselves to seek new, more practical ways of embracing the Other in our midst. In that way, we may find, begin to find, our own humanity. DM168

(2) Particularly, the DA, FF Plus and Cope. Read here

Justice Edwin Cameron is the head of the Judicial Inspectorate of Correctional Services and Chancellor of Stellenbosch University. He retired from the Constitutional Court, South Africa’s highest court, in August 2019 after serving as a judge since 1994.

This is his foreword to [BR]OTHER, published by Jacana.