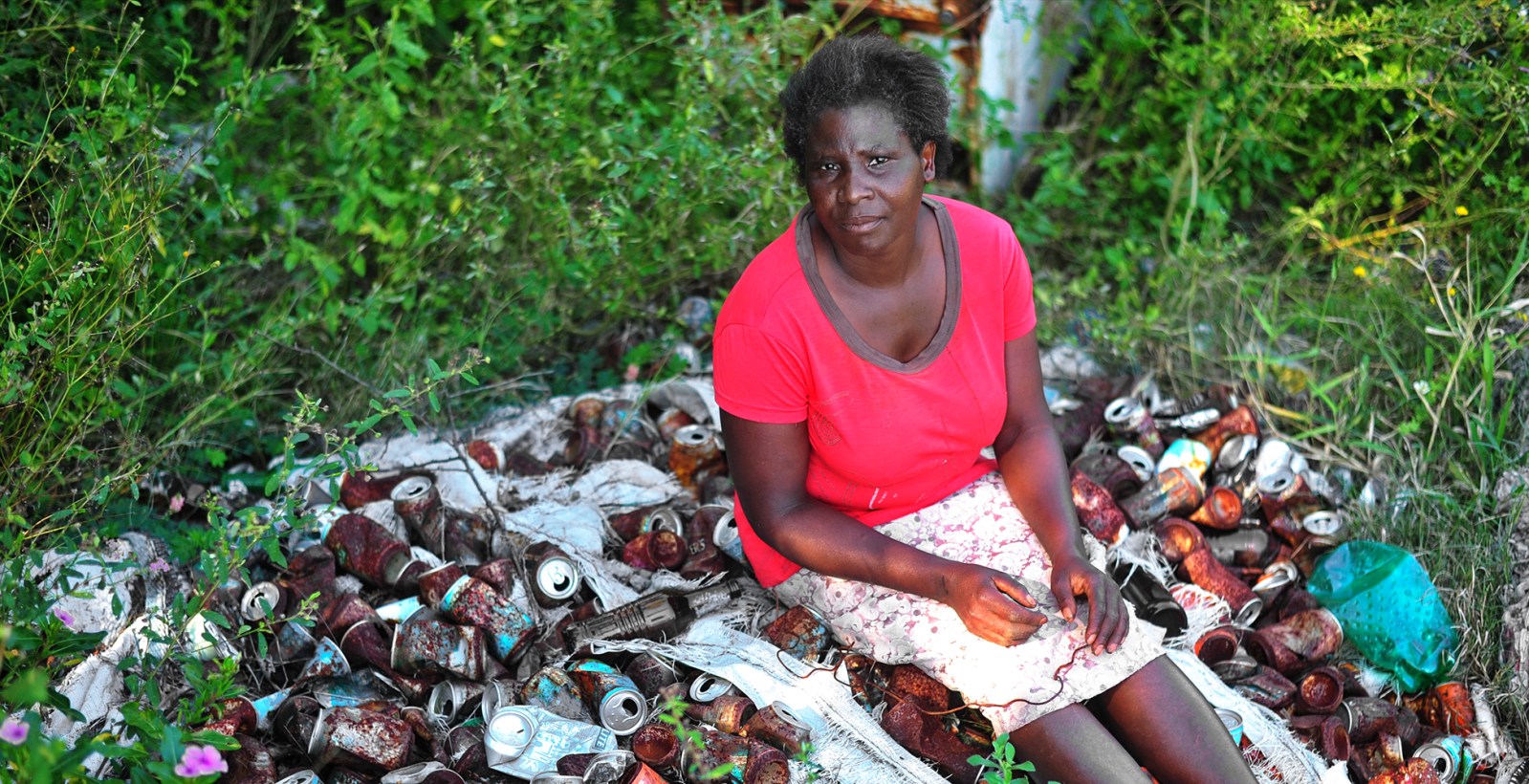 Elisa Shumani is one of more than 100 women in the Makhado municipality who were able to support their families with proceeds from their recycling business before it hit troubled times during the Covid-19 lockdown. (Photo: Lucas Ledwaba / Mukurukuru Media)

The hopes and dreams of hundreds of Limpopo families rest on someone at SARS owning up and fixing the tax mix-up that has caused a social entrepreneur’s thriving recycling business — and community empowerment initiatives — to collapse.

When social entrepreneur Caroline Ramaite realised the company she founded to empower rural women was in danger of being deregistered due to a dispute with SARS, she tried to sell her bakkie to pay the entity.

When that didn’t work, she desperately sought cash from a loan shark and duly paid SARS the R10,000 it said she owed from 2009.

Still, this didn’t help save her company, Montana General Trading, which specialises in waste management and recycling and helps more than 100 women across 37 villages in Limpopo.

SARS refused to issue a tax certificate for the company even after Ramaite had settled the bill she hotly disputed. As a result Montana, which was adversely affected by the Covid-19 lockdown in 2020, missed out on the government’s Covid-19 relief funding.

The Tax Administration Act 28 of 2011 prohibits SARS from disclosing personal tax issues to a third party, including to the media.

However, spokesperson Anton Fisher explained the Ramaite issue: “The amount outstanding was due to non-submission of provisional tax for 2009/01 and 02.”

It appears the failure by SARS to write off the amount it said the company owed stems from either a failure to communicate procedures to Ramaite or a lack of understanding of the processes by her.

“The money was paid, but as an unallocated payment, which meant the payment could not be matched to the taxpayer and was therefore regarded as still outstanding,” said Fisher.

He said for the matter to be resolved: “The taxpayer should send a request for the money to be paid to the provisional tax account 2009/01 and 02 for the debt to be cleared.”

But Ramaite said they have already sent this request to the taxman several times.

“We did this so many times in the branch, but nothing happens. The branch says they have done all on their side and it’s up to SARS head office technical team to clear. More so, they did estimates during a period the company never operated and continue to issue out tax clearance till 2020,” a frustrated Ramaite said.

Ramaite is now gravely ill, bedridden and depressed. She looks a pale shadow of the vibrant woman whose company won the 2020 Limpopo Business Woman of the Year award in the recycling section. She also won the BIC Eskom Competition in 2016 and 2017 and ran workshops to train rural women in skills such as catering and environmental work.

The women who managed to feed their families through the enterprise are now in limbo and equally frustrated. The bakkie Ramaite used to collect waste from the women around the villages stands gathering dust due to a mechanical problem.

Piles of bottles, cans and bottle caps are heaped in the street across from her house in Ha-Mashamba, a rural village near Elim in the Makhado local municipality. A scheme through which Ramaite fed scores of orphaned children from around the villages every Sunday with proceeds from the recycling initiative has also collapsed as a result.

Her husband David Ramaite said they have tried without success to get satisfactory answers from SARS.

“We are in a desperate situation. SARS has really let us down,” he said.

Ramaite started the initiative in 2002 using a wheelbarrow to collect recyclable waste in her community. She grew the enterprise to employ 10 women on a full-time basis. Nine years later, in 2011, she approached the Makhado local municipality and businesses in the area, offering her services to collect waste material such as glass bottles, plastic, paper and cardboard for recycling.

This led to the creation of a network of more than 100 waste collectors across 37 villages in the Makhado local municipality and the Mopani municipality, areas with high levels of poverty and unemployment.

Madume Ivy was recruited by Ramaite in 2011. She was unemployed and depended on a government social grant and subsistence farming to feed her family. After joining the initiative, she managed to register for a course in agriculture at a local college.

“I didn’t know anything about waste recycling then. But mama [Ramaite] taught us everything and now I know how important our service is to the community. We ensure that our communities are safe and we can also earn a living from that,” she said.

Another recyclable waste collector who worked on the project, Elisa Shumani, said she was able to feed her five children through the income she made from the project. She joined in 2014. She has never worked anywhere else and supported her family through subsistence farming and the government’s child social grant.

Now only one of her children is eligible for the monthly R450 grant on which she depends to support herself and the children.

“Life is very hard now. Fortunately, the children have a meal at school [through the School Nutrition Programme]. If it was not for that, I don’t know [what would happen],” said Shumani, adding that working on the project had changed her life for the better.

David Ramaite, a priest at a local church, is also unemployed. He struggles to pay medical fees for his wife. He borrows from neighbours and family to transport her to hospital for treatment.

“It’s tough,” said David, who was worried about how he was going to transport his wife to hospital this week because he is broke.

The hopes and dreams of hundreds of families rest on someone at SARS, doing something to sort out what looks like a minor glitch, but with devastating ramifications. DM/MC — Mukurukuru Media