Embrace the big chill and silence the noise of the world: The challenge of open-water swimming 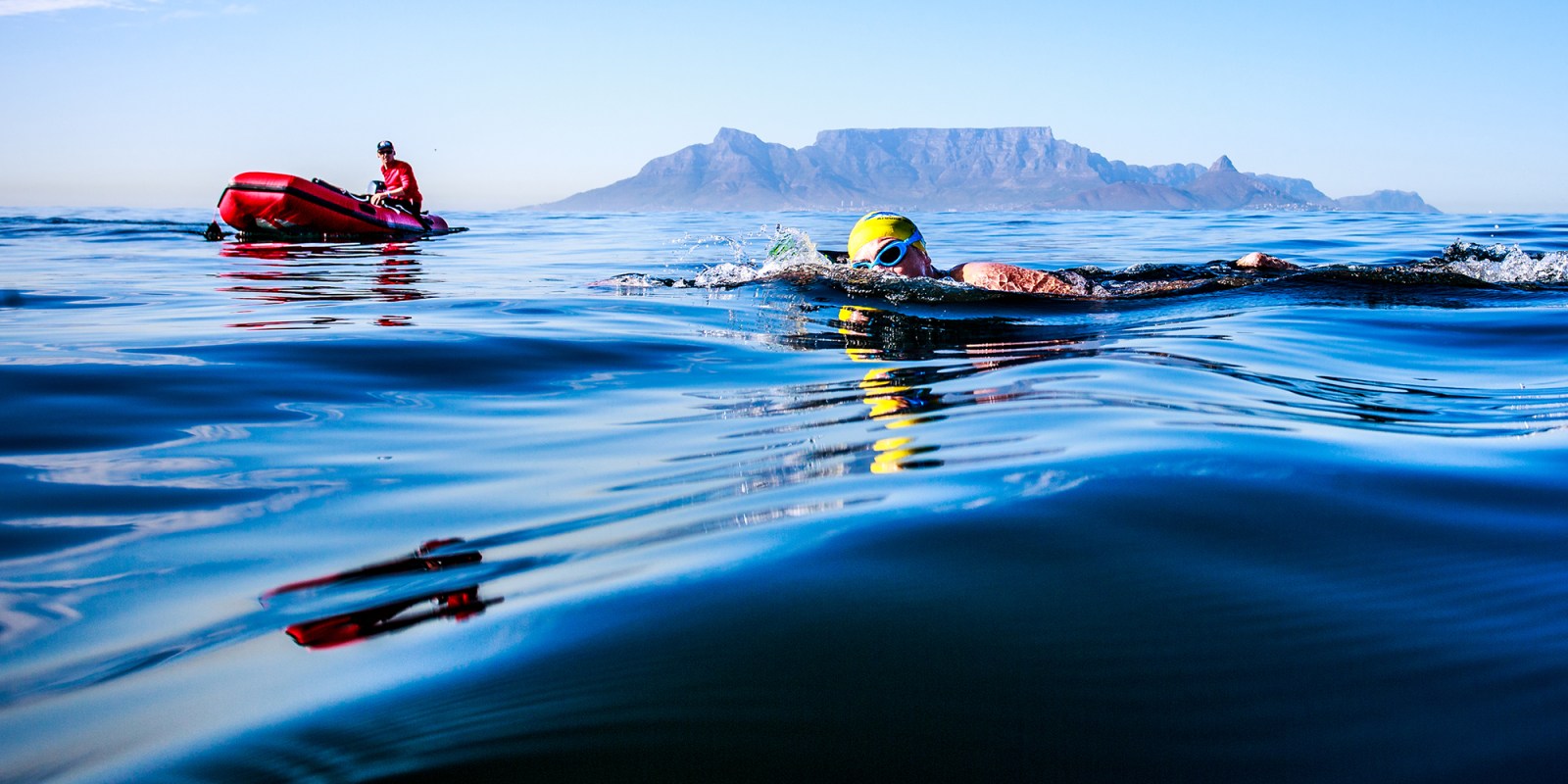 There is no such thing as an easy Robben Island swim, even in perfect conditions. (Photo: Chris Hitchcock)

Open-water swimming at sea was once a sport practised by just a handful of diehard adventurers. Today it is a global phenomenon, but only the brave tackle South Africa’s toughest swims, which include Robben Island, Cape Point and False Bay.

The late great Theodore Yach, the Cape Town open-water sea swimmer, who notched up 109 Robben Island crossings before his untimely death, always advised aspirant sea swimmers that there was no such thing as an easy Robben Island swim.

He would go on to say that the only path to success was to embrace the icy Atlantic. His famous words were “invite the cold in and allow it to lubricate your shoulders and sharpen your mind”.

The Robben Island crossing has become a yardstick for the growing number of South African sea swimmers who challenge the icy swim. Internationally, the 7.4km swim to Blouberg is respected as a tough, treacherous, short and cold swim. It commands respect from the swimming community globally.

Way back in the early 1980s when I first swam “the Island”, the popular exercise landscape was vastly different to the present. Running and cycling events were the rage but, 30-odd years later, that exercise generation has embraced open-water sea swimming. Today, Cape Town has numerous sea and lagoon swims on the calendar and the city boasts three major sea crossings, the 7.4km Robben Island crossing, the 8km around Cape Point swim and the mammoth 34km across False Bay, which matches the English Channel in difficulty and distance.

Besides the cold, sea conditions on swim day need to be close to perfect for a distance sea swim to succeed and in Cape Town, conditions can quickly change. Mother Nature has to be in a generous mood for the challenge to succeed.

The Cape Long Distance Swimming Association has been formed to officiate and record each attempt following the English Channel Swimming Association rules: a pair of goggles, a single swimming cap and a regular costume. In the 1980s the association would record a dozen swims in the year. Today that figure is about 30 a month!

Swimming in the sea in the 1980s was not popular and all training was restricted to the municipal swimming pools. The effect of the 1975 movie Jaws, and the 1976 Clifton Fourth Beach shark attack on the athletes’ psyches, cannot be denied. The shark fishermen of False Bay had regular publicity for the Great White sharks they hunted. It was a different time.

Robben Island swimmers were more comfortable in the warm pools, which meant that they presented themselves on swim day with very little cold water training and experience.

Over the years, a lot of local research into hypothermia has been undertaken by Capetonians Dr Otto Thaning, a local heart surgeon and English Channel swimmer, and Lewis Pugh, the eco-warrior and human polar bear, whose findings show that there is no alternative to acclimatisation. Regular practise in the icy sea offers the best preparation.

Today, organised sea swims in and around Cape Town fill the calendar and weekly ocean swim groups meet in Camps Bay, Big Bay, Simon’s Town, Gordon’s Bay and Hout Bay. Swimmers now present themselves at Robben Island in far better condition and with a much improved chance of success than in the past.

There is a primal intimacy that exists when one swims in the ocean which is difficult to describe. Braced with trepidation, fear, excitement and adrenaline, suspended metres above the sea bed, enveloped by salt water, open-water sea swimming offers the swimmer the opportunity of being suspended in a natural element other than what man is used to. The sport of open-water sea swimming has enjoyed huge popularity in recent years.

Cape Town sea swimmer, Samantha Whelpton, who has many Robben Island swims and an English Channel crossing to her credit says, “the weightlessness and calmness of being in the water silences out the noise of the world and the noises in my mind. Open-water swimming has a huge humbling effect on me and makes me realise how small and insignificant our daily problems are.”

Thirty-three years later, though I had never stopped swimming, my training partner Gary Laing and I found ourselves on the shore at Robben Island on a misty day, ready for another Robben Island adventure.

The sea conditions were swimmable but far from perfect – both sea and air visibility were poor and the sea temperature was 15°C. We had four months of cold-water sea training behind us, peaking at about 14km a week.

As we set off, I remembered Theodore’s comments. Never look back as the Island never leaves you and you’ll quickly become disheartened. The first hour is exciting as your adrenaline kicks in, the second hour is the toughest and your mind has to be the sharpest to fight the cold and whatever sea conditions are presented. This is when the hours of training make the difference. In the third hour, you start feeling the swells to the shore at Blouberg and excitement returns. The dark sea gives way to lime green and then white sand and soon, you’re on terra firma.

A kilometre off Robben Island a huge shoal of jellyfish appeared. All at a similar depth, the picture was similar to a scene from the movie Star Wars, just rows and rows of identical fluorescent yellow battleships swimming beneath us. First I was stung on the shoulder and then Gary lost his cap to a jellyfish. I was soon nauseous and sick from the sting.

“We’ve swum 5km,” Gary says at our next feeding stop. We had planned to count the last 2km together. In no time we were in the waves and at Big Bay. We were clear of the water on Blouberg Beach having swum for a little over three hours. It was Gary’s inaugural crossing.

Tired, cold and excited I could not help recalling Theodore’s words. There is no such thing as an easy Robben Island swim! DM

More information on open-water sea swimming in Cape Town can be found at the following sites: www.cldsa.co.za, www.falsebayswim.co.za, and www.bigbyevents.co.za