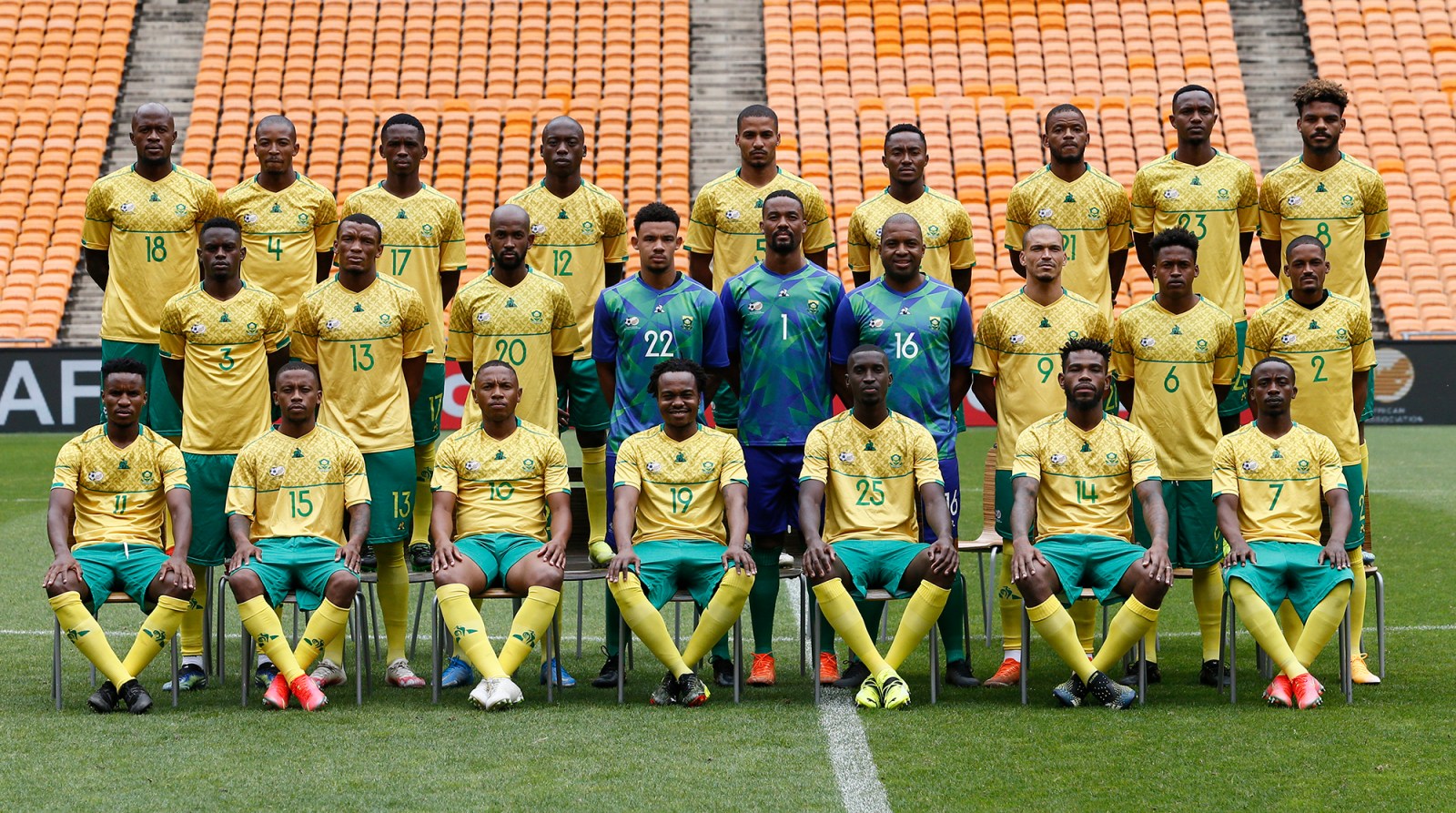 Bafana Bafana posing for a team photograph during their practise session for the Afcon qualifIer against Ghana at FNB Stadium. (Photo: Felix Dlangamandla)

The last time the national team qualified for a World Cup berth was 19 years ago. But, first, head coach Molefi Ntseki must see his team to victory over tricky Sudan to qualify for the 2022 Africa Cup of Nations.

Bafana Bafana head coach Molefi Ntseki is facing the biggest hurdle he’s had to clear since he took over the position from Stuart Baxter in 2019: there are expectations from the South African Football Federation (Safa) – as well as the nation as a whole – that Bafana seals qualification for the 2022 Africa Cup of Nations (Afcon) in Cameroon.

The 51-year-old is not fazed, though, by the pressure. He told journalists earlier this month that he was accustomed to pressure and expectation, having been in charge of South Africa’s youth national teams before ascending to the Bafana job.

“Anybody who is working for any company where there are mandates and expectations to do well is under pressure. I’m not different,” said Ntseki.

“When leading the national team, the mandate is very simple. Not only from the CEO, or the national executive committee or the president … It’s for me to do well as an individual. It’s for me to carry my abilities and my confidence to the next level. Representing your country is an honour.

Qualification for the biannual continental competition has been a laborious task for the South African senior men’s football team in recent years. Before a promising showing under Baxter in the 2019 edition, where they reached the quarter-final stage for the first time since 2013 and only for the third time since 2002, they failed to qualify for three of the past five Afcon tournaments.

With their showings in a group with Ghana, a tricky Sudan side and minnows Sao Tome, they’ve played themselves into contention – and all they need is a draw to seal qualification against Sudan in Khartoum on Sunday evening.

More importantly, sealing qualification for the tournament will guarantee that Ntseki remains in the hot seat to see out his mandate, which was to qualify for the upcoming Afcon tournament as well as the 2022 World Cup in Qatar. Failure to do so would put him in jeopardy, although it is unlikely Safa will wield the axe just yet.

The last time Bafana qualified traditionally for a World Cup berth was 19 years ago – they only participated in the 2010 tournament by virtue of being the host nation.

Ntseki will be hoping to build on his eight-game with the national team, which has seen him notch up four victories, one draw and two losses.

Star forward Percy Tau says he and his teammates are aware of the expectations they face and he’s confident they can be successful in the quest to be in Cameroon next year. “We have been in these situations so many times and our main focus is just to go there, do well and qualify for Afcon,’’ the 26-year-old said.

Ntseki has been left frustrated by some of the players he initially selected for his squad for the crucial qualifiers being denied travel by their clubs, who have cited Covid-19 and the time returning players would need to spend in quarantine as the reasons for refusing to release them. Players such as Bongani Zungu, Dean Furman and Keagan Dolly have been victims of this stance.

Ntseki has been less than impressed by the stance of clubs in this regard. “We should all agree that nobody from South Africa or Africa brought Covid-19. It is very unfair for us to be punished by saying, ‘You cannot be released to go to South Africa because it is a hotspot.’ I think all over the world, it’s a hotspot,” Ntseki said.

“For them not to release our players is a very big disappointment for us. I think even in South America, they were made aware that there were players who weren’t going to be released for the World Cup qualifiers and they suspended their games.”

Fortunately for Ntseki, he can still call on the locally based players, as well as some internationally based players who were permitted to travel, such as Luther Singh, Lyle Foster and Tau.

Responding to the question of whether he felt any extra pressure to carry the team in the absence of some of his other key teammates, Tau answered emphatically: “No, no. I believe whatever we intend to achieve, we must do as a collective. When I am given the responsibility, I share it with my teammates. We all share responsibilities to try and help the team to qualify. We share the pressure as a team but, as I said, the ultimate prize is qualification.’’

Should Bafana indeed qualify, they will be one of the underdogs. They will be eyeing an improvement on their 2019 showing in Cairo, and to reach the last four for the first time since 2000.

Safa president Danny Jordaan believes this is something they can achieve. “We could see in Cairo how the team managed to build confidence and eventually made it to the quarterfinals. Now they have an opportunity again,” he told eNCA.

For now, though, they must focus on the task at hand, which is to vanquish Sudan.

In the corresponding fixture, they defeated the North African country 1-0 thanks to a goal by Lebogang Phiri, who misses out this round of fixtures owing to his lack of match fitness after recovering from injury.

Conditions away from home will be less than ideal, but Bafana and Ntseki will take consolation from the fact that the game will be played in an empty Al-Hilal stadium as opposed to one with tens of thousands of raucous Sudanese supporters cheering for their side. DM168