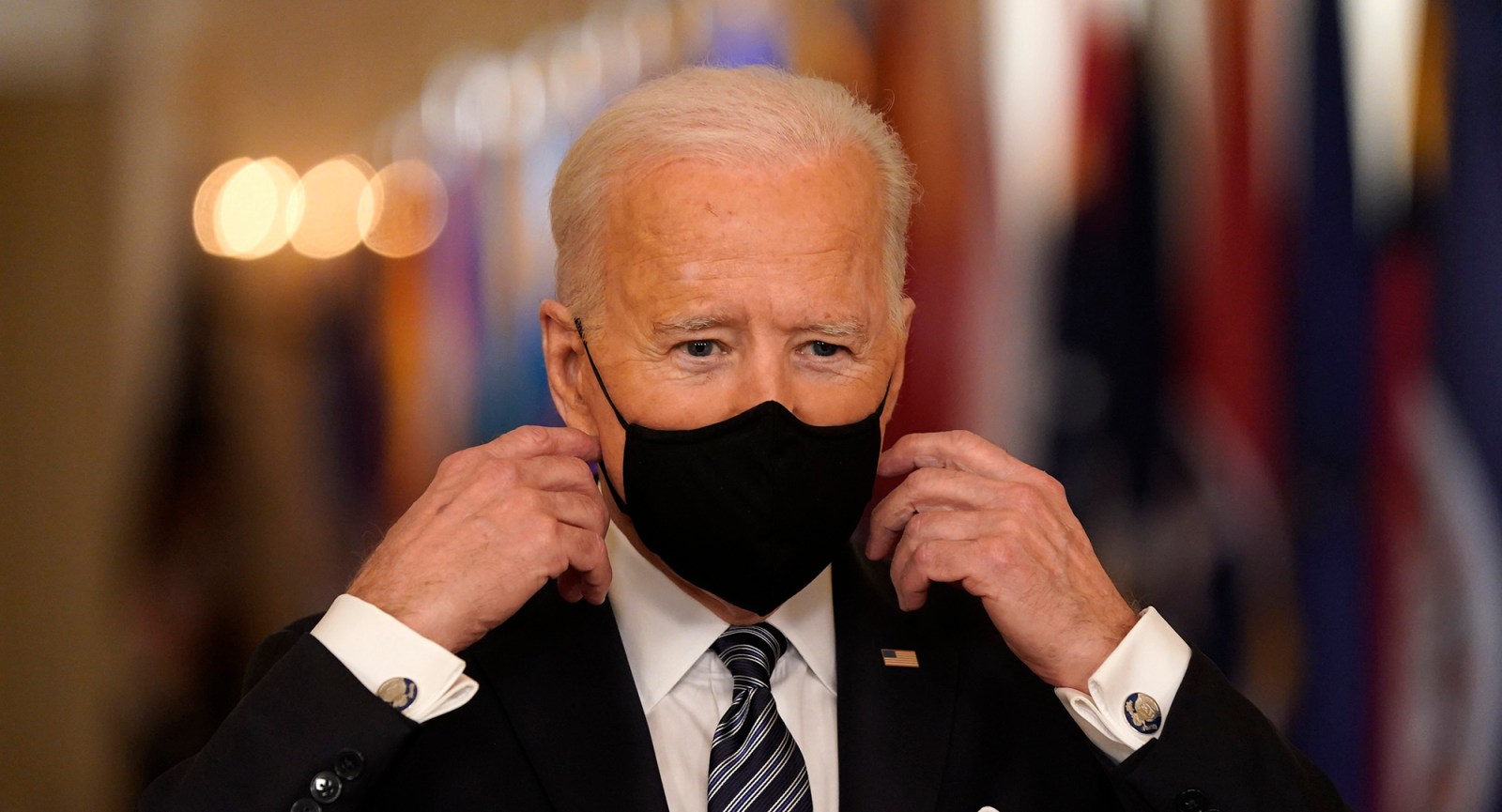 epa09068926 US President Joe Biden removes his mask prior to delivering a nationally televised address to the nation on the one-year anniversary of the COVID-19 pandemic shutdown in the East Room of the White House in Washington, DC, USA, 11 March 2021. EPA-EFE/Chris Kleponis / POOL

A fresh spike of coronavirus cases in the US, with a seven-day average this week of nearly 55,000 new cases a day, has health experts warning people to beware of the variants.

US President Joe Biden has announced that he is doubling his goal of 100 million vaccines in 100 days. This comes as the vaccine effort is going so well that it had already surpassed 100 million on day 58 last week.

In a “progress report to the nation on where we stand, 65 days into office”, Biden said they had met the goal of 100 million administered vaccines last week, “42 days ahead schedule”.

“Now today I am setting a second goal and that is we will, by my 100th day in office, have administered 200 million shots in people’s arms… I know it’s ambitious, but no other country in the world has even come close.”

He also announced they were putting $10-billion into reaching “the hardest hit and the most vulnerable communities, the highest-risk communities as a consequence of the virus”.

Biden was pleased to announce that 100 million stimulus payments of $1,400 had gone out to American citizens, “and millions more will be getting their money very soon”.

He also responded to a number of pertinent questions about a variety of domestic issues such as changing voter legislation in some states, and matters farther afield, including North Korea.

Taking questions, the president said it was important to address the root causes of an influx of immigrants at the border. He is seen by many as not adequately addressing the issue. Political analysts also said that while he needed to address gun control in America, he might not be able to do so right away. Biden said that “the other problems, from guns to immigration, are long-term problems, they’ve been around a long time”.

Biden said the problem currently hounding all Americans – the pandemic and its resultant economic fallout – needs to be the “fundamental focus”. He added: “I’ve been hired to solve problems not create division.”

As of Thursday, 25 March, the US had administered Covid-19 vaccines to nearly 135 million people and recorded more than 30 million cases, according to Johns Hopkins University. The US Centers for Disease Control and Prevention (CDC) tracks the daily distribution, delivery and number of doses administered countrywide. Almost 50 million have been fully vaccinated – about 14% of the population.

According to the CDC tracker, most of the vaccines administered have been the Pfizer-BioNTech and Moderna jabs, which have two doses. Only close to three million of the administered doses have been Johnson & Johnson’s single-shot jab. The CDC also announced on Thursday that it planned “to provide $300-million to jurisdictions for community health worker services to support [Covid-19] prevention and control, and an additional $32-million for training, technical assistance and evaluation”.

While winter is slowly receding in the snowy parts of the US, more states are opening up for business as usual, or pre-pandemic life – despite the fact that only a fraction of the population has been fully vaccinated. Public health experts continue to urge caution, saying new variants could cause another surge. Epidemiologists are watching the spread of the B.1.1.7 variant, which was first detected in the UK and is seen as highly transmissible and deadly.

This week, CDC director Rochelle Walensky, commenting on the recent spike in Covid-19 cases, said: “I continue to be worried about the latest data and the apparent stall we are seeing in the trajectory of the pandemic.”

She told a media briefing that the “relaxation of prevention measures while cases are still high and while concerning variants are spreading rapidly, is a serious threat to the gains we have made”.

There are also two variants first identified in California – B.1.427 and B.1.429. The CDC has classified these as “of concern”, meaning they are thought to be as much as 20 times more transmissible than the original virus. The variant first detected in South Africa, B.1.351, is also of concern, as is the P.1 variant which was first detected in Brazil.

In the first week of March the US recorded its first day of administering two million doses, and this number has not dropped since. On 11 March the White House announced that Biden had set the country on a path to having vaccines available to all Americans by 1 May, with the goal of having a “normal” American Independence Day celebration on 4 July.

Vaccinations in some states have gone so smoothly and swiftly that they are beating the 1 May deadline – including North Carolina which has just announced that all adults will be eligible to be vaccinated by 7 April. Carolina and Florida are also opening vaccine eligibility, with California saying it will vaccinate everyone 16 and older as of 15 April.

A number of other states – including Alaska, Arizona, Mississippi and Utah –  have made the vaccine available to people 16 and older, if there are appointments available.

Polling shows that Republican males are still the largest group of Americans likely to not take the vaccine, which contrasts with the well-known “anti-vax-mom” face of America’s anti-vaxxers. DM