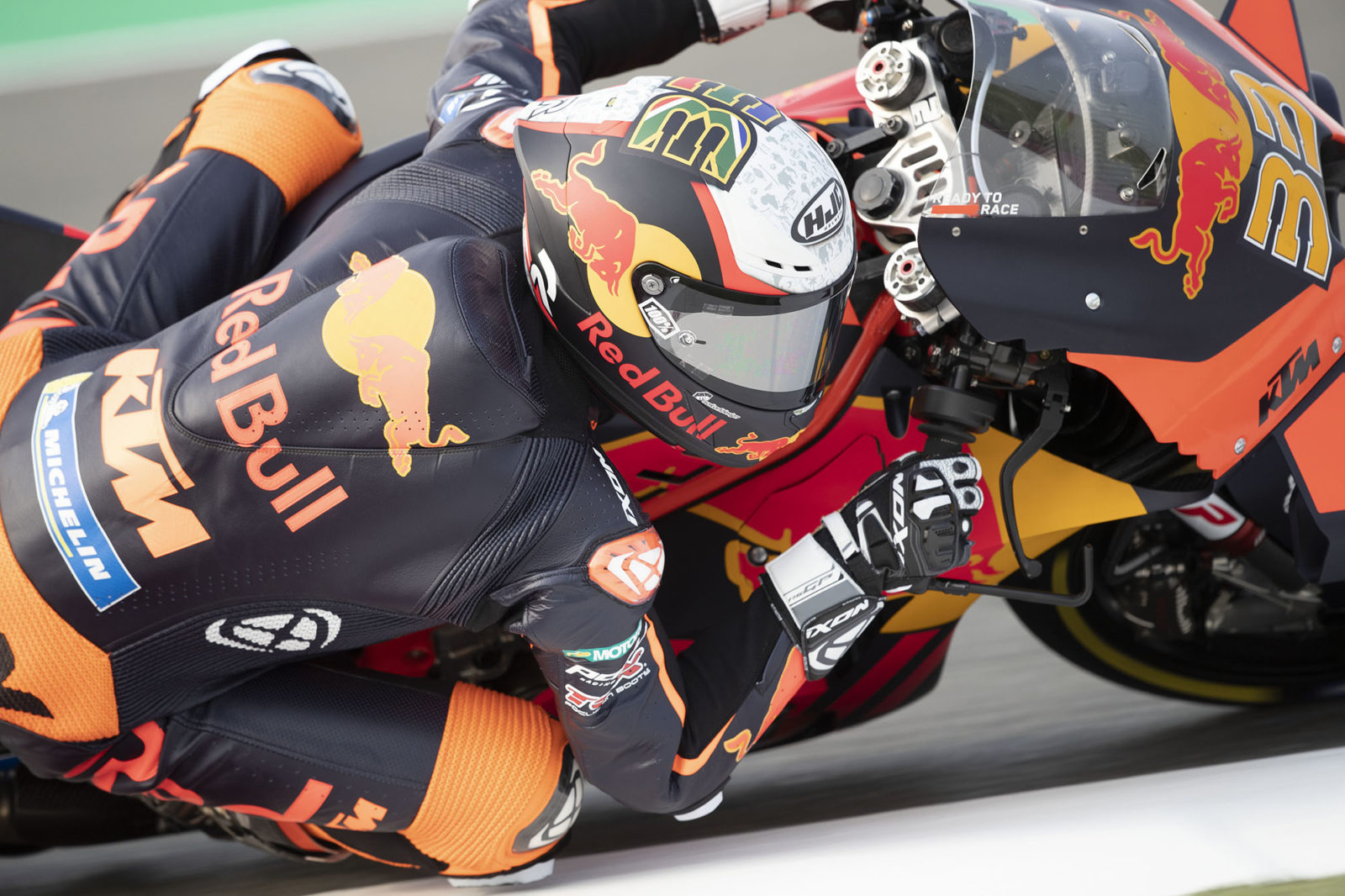 It’s a big weekend for motorsport as the new Formula 1 and MotoGP seasons start, among many other campaigns. For South Africa’s Brad Binder, it represents another opportunity to join the elite of two-wheel racing.

Brad Binder, the first South African to win a premier class Grand Prix in motorcycling, has spent the off-season on other forms of two wheels as he prepares for the 2021 MotoGP campaign.

Motocross and mountain-biking were part of his regime from his parents’ base on Johannesburg’s far West Rand over the festive season. He squeezed in some golf (another passion, but one he’s not very good at, he admits) but only found his way back onto the track for pre-season testing in Qatar last month.

Qatar also hosts the first MotoGP race of the season under lights this weekend. After all the talking and speculation, Friday and Saturday’s practice sessions will give the first real indication of who is where in the cutthroat world of Grand Prix bike racing.

“Pre-season has been great as far as the training and preparations go,” Binder said in an email from his publicists.

“We were meant to start our first test in Japan at the beginning of February, but that got cancelled and moved to a date that was only a couple of weeks ago in Qatar, so we missed out on a few days of testing there, unfortunately.

“It has been tough for us, the start has not been ideal or as we expected. We just need to stay focused and it is now the time where we could either work for first place or 15th place, but I am confident that we will get it right just in time.”

Binder was 2020 Rookie of the Year in MotoGP, which included a race win in Brno in the Czech Republic for his, and Red Bull KTM Factory Racing’s first win in the premier class. As it turned out, it was their last win of the campaign as well, but Binder is confident that more wins are a possibility in 2021.

“Last year’s win has come and gone and now I’m looking forward to having a repeat performance this year,” Binder said in a recent interview with MotoGP.com. “Having won a Grand Prix, I understand how MotoGP works a little better and having had a full season under my belt.

“The 2020 season blew all of our expectations and we achieved a lot with some good results, with Red Bull KTM and my first victory being the main high points.

“But also, we had so many days with the potential to so much more. I made a lot of mistakes and threw away a lot of golden opportunities. That was frustrating, and it’s one thing I want to fix because I know we have the pace and can do a good job.

“Now that I’m in my second year the margins are a bit smaller to try and improve. As the season went on last year, despite a slump in the middle, things got better and better. Not just the results but also the way I was performing on the weekends.”

With an expected full 21-race schedule in 2021 after last year’s curtailed 2020 season, Binder will also have to learn to handle his bike on tracks he has not been on, in this division before.

It might seem like a small detail, but the power of a MotoGP bike means that braking zones and cornering lines, among many other aspects, are vastly different on a more powerful machine.

“I will have to learn a lot of new tracks in 2021 and it will be a challenge for sure,” Binder said. “The main thing is that I understand the machine beneath me much better, and I have a better understanding of how to ride the bike. Hopefully, that means it won’t be such a big challenge to learn these new tracks.

“At the moment I feel like we have a really strong package. We started last season well and improved and I feel I have a golden opportunity in 2021 to show what I’m capable of doing.

“In the off-season, I had the time to reflect on everything I’d learnt in 2020 because during the season, with so many back-t0-back races, there really wasn’t time to understand the details.

“After a few months, it is much clearer to me what I need to improve. I have to stay on the bike a bit more, make fewer mistakes and have a little more self-belief and worry less because the job I can do is enough.”

Binder will have a new teammate in Portugal’s Miguel Oliveira after Spain’s Pol Espargaró moved on to Repsol Honda. Oliveira won two Grand Prix in 2020 and is sure to push Binder hard from inside the KTM Factory Racing garage.

“It is really cool to have Miguel as my teammate, he is a really cool guy, we have always got on really well,” Binder said. “I think we can really push Red Bull KTM on, I am sure between us we can do a really great job.

“The goal for me at the moment is that I really want to fight for a podium, every weekend would be fantastic. If we could be racing for that front battle and keep on pushing, it will give us the opportunity to learn much more and push on a little bit from there.

“I think we have everything we need to really be there. It’s just we need to try to put all the small things together and go from there.”

Is there more for Mir?

Last year’s surprise world champion Joan Mir, riding a Suzuki, will find out that winning the title is one thing, but holding on to it is another, in 2021.

Mir will also have to contend with the return of Spanish compatriot and six-time MotoGP world champion Marc Márquez as part of the equation while veteran Valentino Rossi is still up for another tilt at the title despite being 42.

“Last year we did a really good season, a dream to achieve the Championship. We are here in Qatar, everyone starts from zero and it will be important to feel great here,” Mir said in the pre-race media conference in Qatar.

“The testing was not bad but we have work to do. I’m looking forward to this season, we have a great challenge ahead of us defending the title and we’ll do as good as we can so let’s see.”

Pol Espargaró, who will ride alongside Márquez when he returns to the grid (he is absent from Qatar), has been brought into the famous team after a dismal 2020 that yielded no wins.

The Repsol Honda team had dominated MotoGP for six seasons before 2020, but Márquez’s early-season crash, that ruled him out for the rest of the campaign, left the team leaderless.

Espargaró, who was often quicker than Binder when they were teammates last year, is seen as the man to succeed Márquez at Honda. He now has to start delivering race wins. But the Honda bike is notoriously difficult to handle as its power makes it skittish.

“In the past when I heard someone saying this bike is very difficult, I was always thinking the same thing, for me, one bike with one manufacturer can be very difficult and for one rider with a riding style better to this one it can be easier.” Pol Espargaró said.

“So, for me, the Honda for sure is not the easiest but I don’t agree it is the most difficult bike on the grid. You just need to match the riding style of the bike and it feels like I did that a little in the testing.

“I don’t know how much I matched because it is difficult to evaluate after four days how much I’m connected to the bike. I would take out this idea the bike is difficult, and I want to start to be positive, to be proactive and try to make things happen.

“Starting here in Qatar it is not the best place for Honda or even me, but the testing was quite positive, but we are going to go for it and see what we can do in the first races even if we are still rookies with this bike.” DM