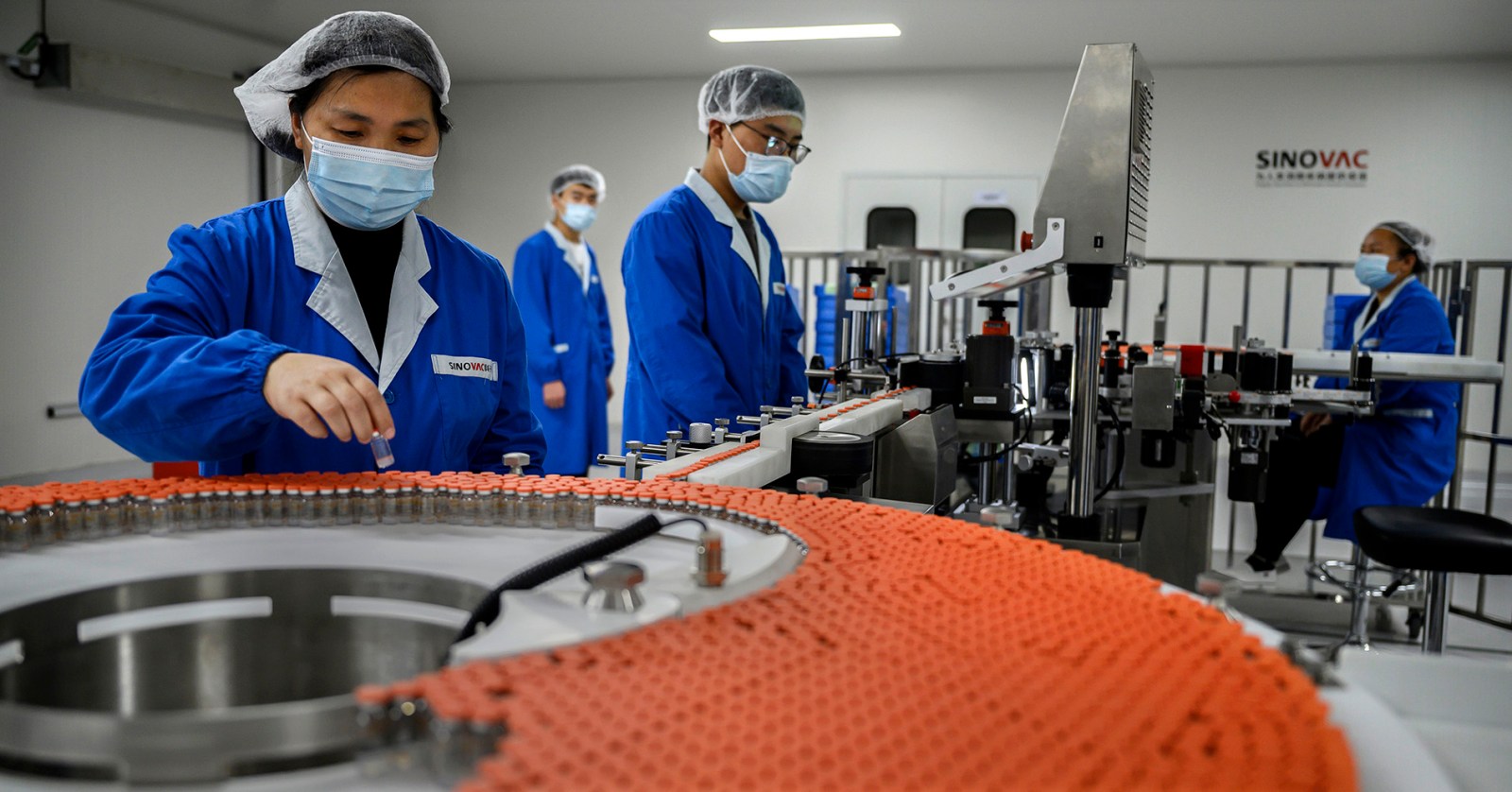 A worker checks vials of potential Covid-19 vaccine CoronaVac on the production line at Sinovac Biotech in Beijing, China on September 24 2020. (Photo by Kevin Frayer/Getty Images)

If the TRIPS waiver bid succeeds, access to Covid-19 vaccines and medicines could be expanded and nations could scale up their manufacture. But that would only be half the battle. South Africa would still need to fix legislation to enable greater access to these lifesaving drugs.

On the face of it, medical innovation offers hope for sick people in need of medicine, but many legislative and other barriers lie between innovation and the realisation of that hope. Currently, South Africa’s patent law regime protects the intellectual property of a patent holder to the detriment of people’s right to health. A patent holder has monopoly over the market of the patented drug. Thus, patent holders benefit while access to medicine for those most in need remains constrained.

This systemic problem is reflected in the production and sale of Covid-19 medicines. There is some hope that, for this narrow category of medicines, patent monopolies and inequalities in access to medicines will be corrected. South Africa and India made a joint proposal to the TRIPS Council at the World Trade Organisation (WTO) – the body tasked with coordinating intellectual property globally – to correct this for Covid-19-related medicines and technology. They sought a temporary patent waiver on all Covid-19 medical technologies, enabling faster scale-up of manufacturing and distribution of these medicines. There was hope that a decision would be made during the WTO’s 10-12 March 2021 meetings, but discussions on the waiver have reached an impasse.

If the TRIPS waiver bid eventually succeeds, access to lifesaving Covid-19 vaccines and medicines could be expanded and nations could scale up their manufacture. But that would only be half the battle. South Africa would still need to fix domestic legislation to enable greater access to Covid-19 and other medicines. Lack of access to medicines is a very serious issue for South Africa’s public health and has been for decades. For lasting change, the government must table a Patents Amendment Bill to facilitate access to medicines locally.

The history of international trade and access to medicines

Due to the international nature of trade because of globalisation, states set up an agreement that would outline the terms of trade, including those relating to intellectual property and patents. This agreement was concluded in 1995 and is known as the Trade-Related Aspects of Intellectual Property Rights (TRIPS). Its operation is overseen by the TRIPS Council at the WTO. This agreement regulates intellectual property and patents for signatories (where patents relate to medicines), often to the detriment of public health considerations. However, the HIV pandemic in 2001 exposed TRIPS’s disadvantageous impact on public health in that it offered protections to patent holders to the detriment of those in need of the medicine created, particularly developing states and people living with HIV.

In 2001, after much activism from groups around the world (including the Treatment Action Campaign in South Africa), the WTO adopted the Doha Ministerial Declaration, which acknowledged that TRIPS made it difficult for member states to access affordable medicines due to the agreement’s impact on medicine prices. It created flexibilities in TRIPS enabling states to grant non-exclusive, compulsory licence on a patent to a third party. A compulsory licence allows the third party to work the patent without the owner’s consent, in exchange for good and valuable consideration. The flexibilities also allow states to determine the terms of those licences, and to decide when intellectual property rights are exhausted.

However, these measures are insufficient as intellectual property rights continue to present significant barriers to the scale-up of manufacturing capacity to produce enough Covid-19 medicines and technologies, and the use of flexibilities to secure access to medicines have always proved unsuccessful in South Africa. At the current rate of production, it is projected that less than one-fifth of the population of countries in the COVAX programme will be inoculated by the end of 2021. The current level of production does not meet the level of need combined with the pandemic time constraints.

Various international institutions have called for a combined, global effort to ensure everyone, globally, has access to Covid-19 medicines and health technologies. These include the World Health Organisation (WHO) and the Committee on Economic, Social and Cultural Rights (CESCR). The WHO released a call to action “to realise equitable global access to Covid-19 health technologies through pooling of knowledge, intellectual property and data”, which was signed by 40 states. The CESCR comprises 18 independent experts who monitor the implementation of the International Covenant on Economic, Social and Cultural Rights by its state parties; and carries out functions assigned to the United Nations Economic and Social Council. The CESCR called for states to uphold their obligation to ensure equitable and universal access to Covid-19 vaccines. This obligation includes states using all available resources. The TRIPS waiver is one instrument available to governments in a symphony of state efforts to reach global population immunity. These efforts also include domestic legal reform.

Of course, Covid-19 is not the only health concern whose treatment or prevention is affected negatively by the protection of patent rights over the protection of public health. HIV, tuberculosis (TB) and cancer treatments suffer the same fate. And while the TRIPS waiver for Covid-19 medical technology is a step in the right direction, for longer-lasting change we need a change in approach at the national level.

Around the same time as the creation of TRIPS, South Africa was attempting to build a society based on equality, freedom and human dignity. One of the rights fundamental to this new South Africa is the right to access healthcare, of which access to medicines is an important component. Understandably, it takes time and iterative effort to correct and create policies and laws that will best enable the realisation of the right to access healthcare, including medicines. In 2018, the government published a policy envisioning patent law reform in South Africa through the Patents Amendment Bill. The government thus recognised the need for domestic legislative reform and began the process to achieve it. This recognition followed the loss of many lives when the HIV epidemic devastated the country. Adjustments to patent policy and legislation have been ad hoc, related to specific medicines or individual diseases like HIV, and neglecting other diseases such as TB and cancer.

We cannot allow this approach to continue. A Covid-19 pandemic-focused approach fails to address the broader issues with current policy and legislation. South Africa’s current patents law regime is imbalanced to the detriment of the constitutional right to health, despite international developments through the Doha Declaration internationally and the Constitution domestically.

Knocking on Minister Patel’s office for access to medicines now

Minister of Trade, Industry and Competition Ebrahim Patel must introduce the Patent Amendment Bill to Parliament to correct this. Fix the Patent Laws Campaign (FTPL), a coalition of more than 40 organisations, works to improve access to medicine through patent law reform. The FTPL made submissions on the Draft Intellectual Property Policy in 2017. One of the expected outcomes was the Patents Amendment Bill which would reform patent law in South Africa, thereby improving access to medicine. The FTPL continued to correspond with the minister, requesting that he introduce the bill or provide an update on its progress. The FTPL has demonstrated outside the Department of Trade, Industry and Competition to make our demands known several times since 2016.

We continue to engage the department. The FTPL picketed outside the department on Thursday, 18 March 2021 to urge Patel to introduce a Patent Amendment Bill to Parliament so we can expedite and expand access to high-quality and affordable medicines, realise the goals of the Constitution and improve patients’ lives across the country. The department has until the end of the month to respond to our memorandum and we look forward to engaging with the government on how best to increase and expedite access to crucial medicines for all people in South Africa.

The Covid-19 pandemic has highlighted the need for laws that regulate patents to evolve in line with public health considerations; including domestic laws. The roll-out of vaccines has renewed hope for access to medicines for everyone – 490 people have already added their voices through a petition calling for Patel to release the bill. The department has a duty to reflect South Africa’s international medical reform efforts domestically, ensuring that, if the TRIPS waiver proposal is successful, the country’s patent laws will not prevent its people from accessing urgently needed Covid-19 treatment. The government should not wait on international reform to enact domestic law reform. DM/MC

Baone Twala is a legal researcher in the health rights team at SECTION27 and works on SECTION27’s work with the Fix the Patent Laws Campaign.