Veiled threats and discontent as Zuma supporters mobilise outside ConCourt 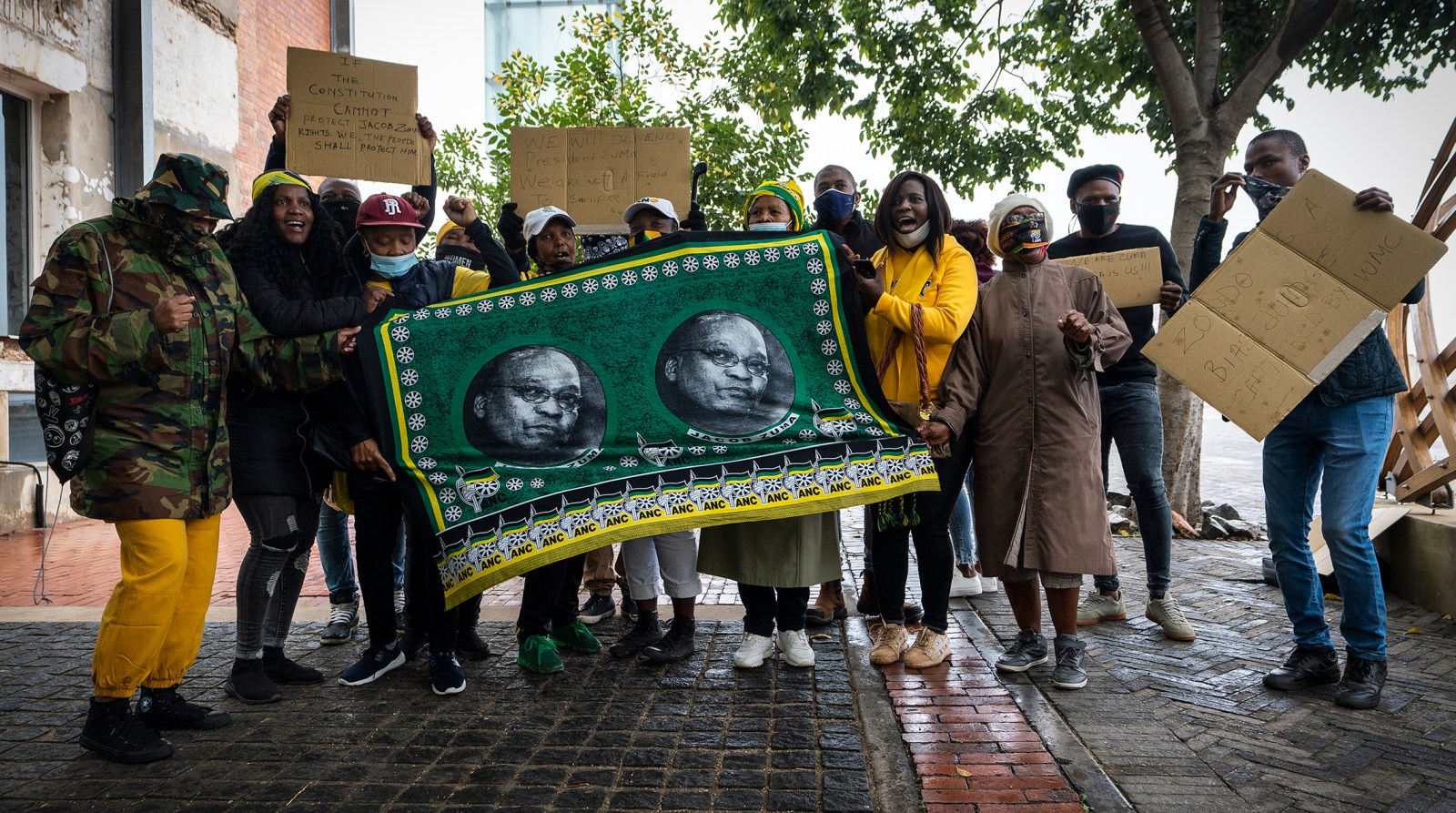 Pro Zuma supporters hold a flag bearing the face of ex South African President Jacob Zuma as the they show their support outside the Constitutional Court. Photo / Shiraaz Mohamed.

Supporters of former president Jacob Zuma, the face of which is Carl Niehaus, spokesperson for the uMkhonto weSizwe Military Veterans (MKVA) vowed on Thursday that South Africa will experience instability should Zuma lose the case before the Constitutional Court.

Advocate Tembeka Ngcukaitobi, arguing on behalf of the State Capture Commission, called for former president Jacob Zuma to be jailed for two years because his conduct in ignoring a summons and Constitutional Court instruction to appear before the commission threatens South Africa’s entire constitutional order.

But on hearing this, Zuma’s supporters who had gathered outside the court on Thursday said this would bring instability to the country.

“Such a judgement would lead to outrage and anger amongst us supporters,” said Carl Niehaus, spokesperson for the uMkhonto weSizwe Military Veterans (MKVA) and ardent Zuma supporter.

“If the judgement does not go in favour of president Zuma it will be a sad day. President Zuma is probably the most prominent politician in the country, he has huge support.

“The supporters of president Zuma feel very strongly that he’s been treated unfairly and that he has been politically targeted,” Niehaus said.

Asked about his own personal attendance Niehaus said: “I’m here because I’m outraged at the manner in which president Zuma has been treated for many years. I find it unacceptable that he constantly gets targeted for political reasons. I believe the Zondo commission was started to target president Zuma.”

Niehaus said under these circumstances it was correct for Zuma to feel that he was targeted. And that the law was adjusted and used in the attack against him.

Niehaus said when the MKMVA met with Zuma in Nkandla, Zuma emphasised that he did not want to undermine the rule of law.

But Niehaus said Zuma had raised some very serious concerns about how Judge Zondo, in the recusal application that Zuma had made, presented himself both as a material witness and judge.

According to Niehaus, Zuma’s other concern was that Judge Zondo had rushed past the high court, to the Constitutional Court.

He said Zuma believes that the matter should have headed to the high first.

Niehaus said Zuma had told the MKMVA that the Constitutional Court had taken away his right to remain silent.

He said, as a result, the ConCourt and the Commission had created a situation where Zuma was cornered into the position of contempt of court. Zuma did not file opposing papers to the application by the State Capture Commission.

Zuma’s supporters were not alone outside the court.

Despite the cold and rainy weather, many organisations turned up to support the Constitutional Court. Among them was former DA leader Mmusi Maimane’s One South Africa Movement (OSAM). A representative of the movement told Daily Maverick that they were not at court for political reasons.

Said Derek Holmes, the CEO for Move one Million “The reason we are here today is to ensure that whatever decision the ConCourt rules on it is adhered to.”

He said the movement did not believe that in a constitutional democracy any one person could be above the law. He said all the organisation wanted to see was people treated equally in the country.

Asked if the movement’s attendance in court hinged on favouring a particular decision, Holmes said: “We don’t have a favourite, the legal system is in place for who does what and how”.

He added the movement had faith in the South African legal system.

Lindi Nkosi a member of the Radical Economic Transformation group said the country’s constitution was being abused. She said her attendance was motivated by such abuse.

“We are busy fighting and protecting others while other members of the same party were being crucified. When I say others, I mean president Zuma. Follow the examples as they flow out from the commission,” she said.

Nkosi said she was openly a part of the RET group and her main concern was that if Zuma is put to trial, all ANC members accused of wrongdoing should follow suit.

Added Nkosi, “No one will arrest Zuma because they would have to arrest the throngs of his supporters with him”.

Apart from the ANC and OSAM, members of the newly-formed Action SA party were also in attendance. A female member of the party defied the rain and focussed on carrying printing letters on a plain cardboard box against the wall of the ConCourt. She wrote in large capital letters: “YOU STOLE THE COUNTRY TO BANKRUPTCY.”

Pretty Ntshele, 48, from Yeoville, who supports the former Johannesburg mayor Herman Mashaba’s campaign said she wanted to express her worry for the general well-being of South Africans. She said while she was against the court defiance by Zuma, she was especially concerned about important matters such as gender-based violence (GBV), crime, education and others that the ruling party seemed to have neglected.

“If Zuma has to answer, he must answer because all this is his and the ANC’s doing,” said Ntshele.

But Nkosi vowed to defend Zuma. “We will fight, no one will get on Zuma’s head and expect us to keep quiet. The RET is the ANC’s policy, none of us are out of line. It’s the media that wants South Africa to believe this.”

Said Nkosi “We will die where president Zuma dies”. DM