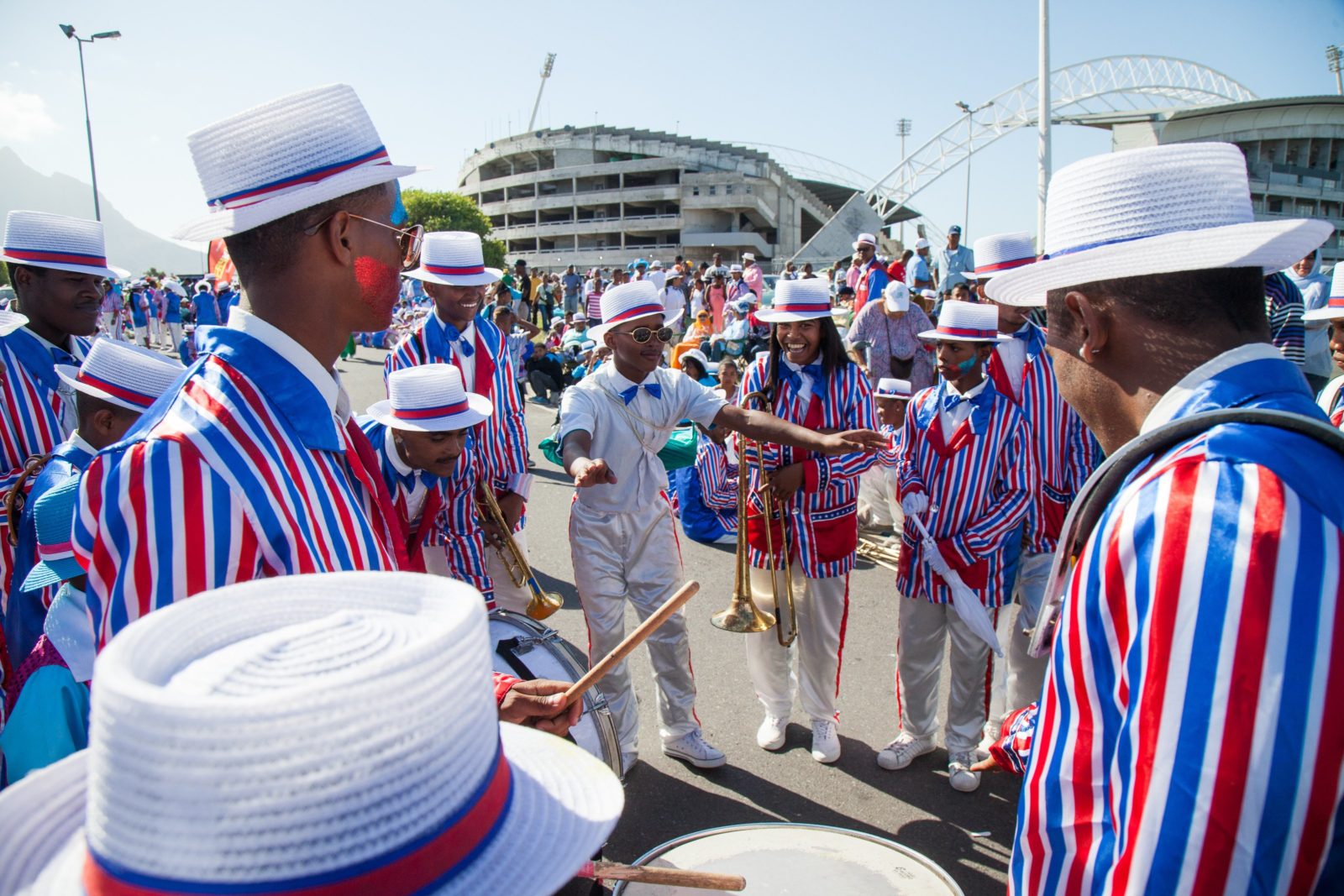 Between 2003 and 2019 the Cape Town Minstrel Carnival Association received nearly R70-million from the National Lotteries Commission. But it remains an unanswered question how much of that money actually went to its intended purpose. (Archive photo: Ashraf Hendricks)

New information bolsters the concern that public money may have been used for an ANC election campaign.

New information has emerged placing former ANC Western Cape leader Marius Fransman at the centre of a plan to use money from the National Lottery to attract “coloured” votes during the 2014 elections.

Fransman had allegedly tried to buy support for the ANC by promising cash to the Cape minstrel troupes in exchange for their commitment to vote for the ANC, the Sunday Times reported in 2015.

At the time, Fransman denied soliciting votes from the minstrels in exchange for cash.

But GroundUp can reveal that Fransman, who was then deputy minister for International Relations and Cooperation, was central to the running of a Lottery-funded magazine aimed at the “Cape Coloured community”, through the Cape Town Minstrel Carnival Association. The magazine, Jitz, received R8.29-million from the Lottery. This was one of several multi million-rand Lottery grants given to the minstrels’ association.

At the time, the Western Cape ANC was deeply divided and Fransman headed up a pro-Jacob Zuma faction that had its own election headquarters and “war room” in Observatory in Cape Town, in the runup to the 2014 national and provincial elections.

Fransman’s name did not appear in any marketing or promotional material for Jitz magazine. But four sources have told GroundUp that he played a role in the magazine even after he was axed as deputy minister. During the almost a year that the magazine was published he was the leader of the opposition in the Provincial Parliament and headed up the ANC in the province.

“Everything we did had to be passed by Fransman,” says publicist and former radio show host Soli Philander, who worked on a short freelance contract publicising Jitz prior to its launch, and for a short period afterwards.

“Marius recruited me to do the marketing. The people who were doing the magazine also reported to Marius. It was clear that it was Marius’s baby,” he said.

Philander worked on the marketing of Jitz for about three months before being told his services were no longer required. He had no further involvement with Jitz after that and says he had no idea that the magazine was Lottery-funded.

A former member of the ANC who was active in the party’s core Western Cape leadership at the time confirmed that Fransman had been closely involved with Jitz. He said that there were “rumours at the time” that the magazine was funded by the Lottery.

“There is no question that Lottery money went into the ANC’s coffers,” the same former top ANC official told GroundUp last year. “The ANC project was to use the minstrels to build support in coloured communities. It was simple to do because a relationship with the minstrels already existed through Fransman, he said. “During the election campaign (in the Western Cape) the minstrels were everywhere, they were at every (ANC) event.”

Prominent ANC events where the minstrels performed in the Western included a rally in April 2014 on the Cape Flats a few weeks before the election. Minstrels troupes also performed at other ANC events, including a pre-election rally in Vygieskraal, Athlone, ahead of the elections, where then-president Zuma also celebrated his 72nd birthday.

Speaking at that rally, Zuma accused the DA-controlled Western Cape government of not caring for coloured people, and said: “This provincial government fails to support the minstrels, klopse and Malay choirs and refuses to agree to the historical right to march”.

In response to detailed questions from GroundUp, Fransman denied that he was “the founder of the magazine” and said GroundUp was “being fed by people with some ulterior motive”.

“The line of questions smack of insinuation and assumption, and as a senior reporter, I do not believe you will wilfully fall into [a] trap of being used by mischief makers and lies,” Fransman said in a written response to detailed questions about the magazine and his role in it.

“In my capacity as the then leader of the [ANC in the Western Cape and province] and a member of government at time in office, as any other political office bearers, one attends and at times addresses functions, events, engagements with community organisations and business when invited. There is nothing wrong in that and it is disingenuous to allege such,” Fransman said.

Another person who was closely involved with the magazine, who asked not to be named, said that they had attended “lots of” Jitz meetings at which Fransman was present and played an “active” part.

What the Lottery got for R8.29 million

Described as a lifestyle magazine, Jitz carried the tagline “Celebrating Cape Culture” on its cover. The magazine published between 10 and 12 editions before it folded in 2015. That means that it cost between R691,000 and R830,000 per edition if the total grant is averaged over the number of editions produced using Lottery money.

The Jitz staff also produced a single magazine about Cape Town’s minstrels that was distributed at minstrel events. But it was not branded as a Jitz publication, GroundUp was told.

The magazine failed to attract much advertising and after eight months of publishing the May 2015 edition only had a full-page inside cover advert for the National Lottery and three full-page adverts.

The Lottery grant money was channelled to Jitz via the Cape Town Minstrel Carnival Association, which received R69-million in Lottery funding between 2003 and 2019. At the time of the Jitz grant in 2013, the association was under the control of Richard “Pot” Stemmet, a convicted criminal who police have described as a “drugs high flier”, and Kevin Momberg, who were both directors of the association.

A “Carnival Heritage Museum”, which was funded to the tune of R13-million via the minstrel association in the same year, is yet to open its doors almost eight years later. It is supposedly on the premises in Wetton, Cape Town where Stemmet operates several businesses.

As this was explained to him, the man repeated them out loud to Stemmet, who shouted: “Sy poes. Hy werk vir die DA. Sê vir hom hy moet fok off” [“His p..s. He works for the DA. Tell him to fuck off”].

The email was sent to the address supplied but no response was received.

This is not the first time that Stemmet has threatened this reporter. Previously, after he was asked about the minstrel museum he threatened and swore at me, before ordering one of his associates to escort me from the premises and to photograph me and my vehicle’s number plate.

The magazine grant was part of a R13.75-million grant to the minstrel association which included R5.46-million for a “Socio-Economic Cohesion Symposium and Cultural Awareness campaign”, according to a written answer to Parliament by National Lotteries Commission Commissioner Thabang Mampane.

In her answer to Parliament about Jitz, Mampane said: “A total amount of about R8,290,000 was spent on the magazine.” Mampane said the grant “is inclusive of procurement of transport equipment, marketing costs, procurement of operational equipment including personnel costs”.

“The report submitted does not provide the number of publications and only quantifies the costs associated with publishing the magazine,” Mampane said, apparently referring to a report by the minstrels association on how the money was spent.

With regard to the symposium and cultural awareness campaign, Mampane did not answer parliamentary questions about how many people attended and who the speakers were. The symposium was held “in two different areas/regions namely the metropole as well as the Western Cape region, Mampane said, but she did not specify where.

“This cost is inclusive of all operational costs and personnel costs for both regions/areas,” Mampane said. “The purpose of the cultural awareness campaign was to set a foundation to integrate communities who were still operating within the boundaries of the previous dispensation according to race and socioeconomic status.”

In response to follow-up questions requesting audited figures on how the R8.29-million was spent and the number of issues produced and total copies printed, Mampane said that she needed permission from the Special Investigations Unit (SIU) — which is investigating alleged NLC corruption — before she could respond. Minister Ebrahim Patel replied his department had checked with the SIU, which had no objection to being released in Parliament. He also undertook to supply the requested information once he received it.

Last year, Fransman was far more forthcoming when he was asked by GroundUp about allegations of indirect Lottery funding of the Western Cape ANC.

He said: “I am no longer in politics and just want to move on with my life. I cannot talk for the ANC, but when I headed up the ANC in the Western Cape we engaged with all sectors of society, and the minstrels were one of them. NGOs would ask where they could get funding and we made suggestions that included the Lottery. We were not involved in the operational side of their applications but we did speak at their events. If we went to an event we would not know who funded it,” he said.

“But I can say that no money from the Lottery went to the ANC,” he said.

At the time, NLC spokesman Ndivhuho Mafela said that “the NLC does not fund political parties or affiliations”.

ANC Western Cape spokesperson Dennis Cruywagen told GroundUp this month: “Mr Fransman is no longer an ANC member. The present leadership was appointed in 2019 and does not know about funding for the Minstrels. All questions should be referred to Mr Fransman.” DM