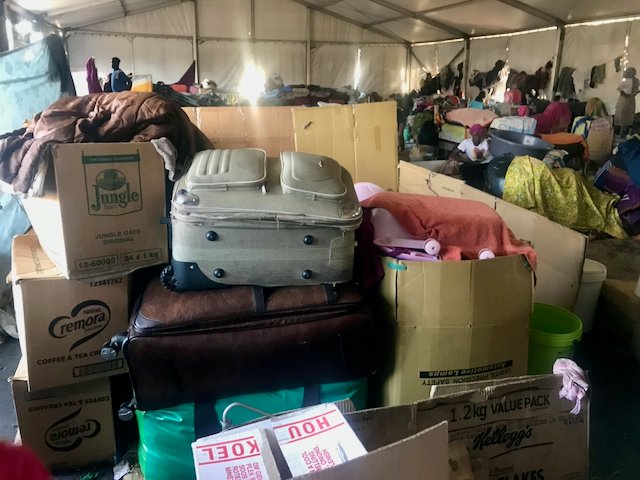 Aline Bukuru has been separated from her three children who remain in the Belville camp without a guardian.

Lawyers for Human Rights (LHR) have visited Aline Bukuru, one of the Cape Town leaders of the 2019/20 months-long refugee protest, for a consultation at Lindela Repatriation Centre on 17 March, where she is awaiting deportation.

Attorney Charné Tracey said, “My intention is to assess whether her claim to refugee status in South Africa is strong and credible enough to warrant a high court review.”

Refugee leader Hafiz Mohammed said that Bukuru, who is from the Democratic Republic of Congo (DRC), had appeared at Bellville Magistrate Court on 2 March and an order for her deportation had been issued.

Bukuru, along with scores of refugees from the Bellville camp, were detained by the Department of Home Affairs on 28 October. According to Mohammed, 19 had returned, 30 had gone to Lindela, and ten people had gone missing. “We have not heard from them and their families are worried,” said Mohammed.

The refugee camps in Bellville and Kensington (Wingfield) arose from a protest outside the offices of the United Nations High Commissioner for Refugees (UNHCR) by refugees who ended up spending months on Greenmarket Square.

Bukuru was detained for over 125 days from arrest to the court hearing and is still being detained. It is now 148 days since her arrest.

According to the Scalabrini Centre, “if a person has been detained for the purpose of deportation for more than 120 days, the detainee must be released”.

“Life has been difficult for the past four months. I have spent [it going] from a jail to another jail,” Bukuru said in a voice note recorded in Lindela on 5 March. “My journey to Lindela was very painful. Three immigration officers drove me. It was not easy sitting in the back. The van was too small even to stretch my legs. It was very hot and there was no ventilation.”

According to Bukuru, the trip took 19 hours.

Bukuru said she had been in the country for 11 years and had made the effort to renew her papers on time. She felt she had been singled out for deportation.

On 2 March, UNHCR spokesperson Kate Pond said, “While UNHCR is not able to comment on individual cases, we consistently advocate that everyone who is in need of international protection cannot be returned to their countries of origin until their claims have been properly assessed by the competent authorities, in accordance with the law.

“The government assessed the asylum claims of all of the protesters in October and November, during which some people were found to be no longer in need of international protection. They are now subject to immigration laws like any other foreign nationals.”

On 28 October 2020, Bukuru refused to sign the Refugee Status Determination Officer (RSDO) assessment and decision document which said: “The appellant is not a dependent of a refugee and is not married to a recognised refugee in South Africa. The authority therefore finds that the appellant is not a refugee in terms of section 3(c) of the Act … The appeal of Mrs Aline Bukuru and family of the DRC is unsuccessful. The decision of the RSDO rejecting appellant’s application for refugee status is hereby substituted with the above reasons. Refuge protection is accordingly denied.”

In the RSDO interview dated 18 July 2011, Bukuru said she had fled the Mai Mai movement. In her appeal documents in 2014, Bukuru said fearing for her life she fled her home in South Kivu to South Africa in 2008. The Mai Mai killed her husband’s mother and brother in 2007, she said.

Bukuru was living with her three children in the Bellville camp. The children remain there now without their mother or any guardian.

On 2 March the UNHCR told GroundUp there are families from both Bellville and Kensington who have requested assistance to return to the community.

According to Pond: “We are putting in place systems to directly assess reintegration and have been assisting people throughout the year on a case-by-case basis. UNHCR’s representative in South Africa, Leonard Zulu, visited the protesters’ sites on 15 February for the second time.”

Pond said that Zulu had reiterated that the UNHCR’s position is that group resettlement would not be offered as a solution.

But the refugee leader at the Bellville camp, Unice Akellow, gave a different account of the meeting, saying Zulu had dodged questions.

Spokesperson for the Kensington group Laurence Mambu said there are refugees who will still not accept reintegration. Mambu said that before refugees go back to the community the government needs to address their complaints regarding safety and documentation.

Pond said, “Everyone … who is still in need of international protection has the right to remain in South Africa and must engage with the national asylum procedures. UNHCR strongly encourages them to return to the community, and re-enrol their children in school. We and our partners stand ready to support.”

GroundUp contacted Home Affairs spokesperson Siyabulela Qoza on 1 March. A follow-up email and text message were ignored and our calls were not answered. DM