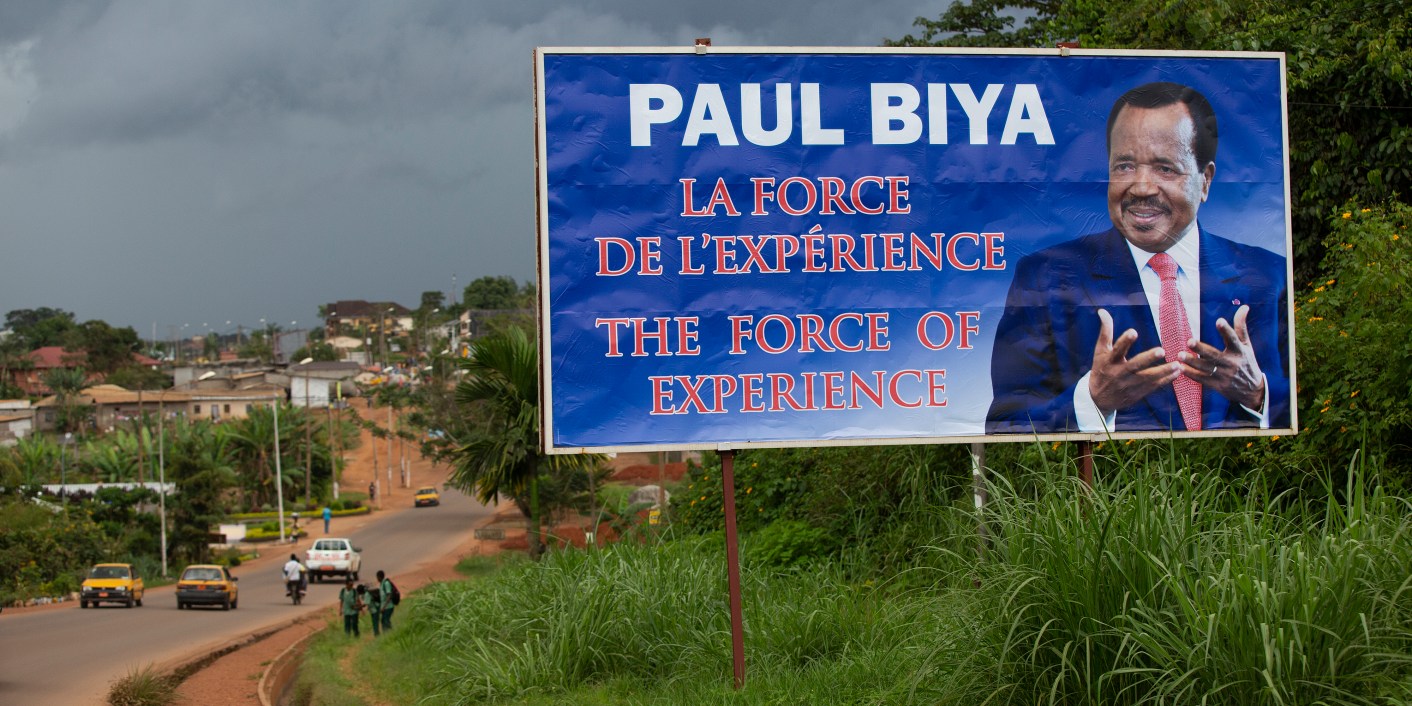 A member of Cameroon's elite Rapid Intervention Brigade. Over the past two years, many illicit firearms have been seized from dealers in northern Cameroon coming in from countries experiencing conflicts such as Sudan, Nigeria and Chad, according to a police source in Garoua. (Photo: Amnesty International)

Recent military victories are no reason for complacency in the absence of a broad-based, inclusive political settlement.

From 16 January to 7 February, Cameroon hosted the African Nations Championship. Some games were played in the town of Limbe in the South-West region, which is in the grip of an armed conflict between government forces and secessionist militias.

The absence of secessionist violence during the championship may have given the impression that the Anglophone crisis had been resolved – but that isn’t true.

After four years of conflict, the figures are telling: refugees rose from 20,485 in January 2018 to 63,235 in January 2021. In November 2020, the number of internally displaced people stood at 705,000 compared to 679,000 a year earlier. This is paradoxical as secessionist armed groups have struggled to exert military control over the North-West and South-West regions, even if their social hold is real.

Defence and security forces have managed to contain secessionist groups’ territorial footprint, particularly in urban centres. National forces are using people’s fear of the separatists’ criminal activities against these groups.

Despite these favourable developments, the growing number of refugees and displaced people indicates a volatile security situation in the regions. Moreover, Cameroon’s partners are increasing the pressure on the government to find a political solution. Local political actors and activists seeking to embarrass the government have echoed these calls.

Cameroon’s approach to the crisis has always encompassed both political and military dimensions. At stake here is the quality of the political agreement on offer and the impact of solutions favoured by the Cameroonian government to date.

Although the military has achieved results, abuses against alleged separatists by security forces have tarnished Cameroon’s reputation internationally. The government’s prioritisation of military responses has probably swollen the ranks of secessionists to the detriment of those actors advocating for a federal state as the solution.

Up to 2016, most English-speaking citizens favoured a Cameroonian nation, regardless of the political regime. Today it’s clear that prioritising military action won’t resuscitate the fragile sense of national belonging of many English-speaking Cameroonians. Instead, the military response has likely crystallised the “imagined English-speaking community,” which will undermine any recent gains in the future.

Cameroon’s efforts at finding a political solution haven’t been fruitful. Separatist fever persists despite various efforts such as commissions to promote bilingualism and multiculturalism, disarmament, demobilisation and reintegration, the establishment of a special status for English-speaking regions, and sentencing separatist leaders.

Both the method and scope of these measures are to blame. Rather than holding talks with the insurgents, the government came up with the steps unilaterally. The national dialogue organised in October 2019 also suffered from a lack of prior consultation. Any political agreement will need the support of a majority of stakeholders to be sustainable.

A lasting solution to the Anglophone crisis requires a change in Cameroonian political practice, which is based on the myth that the government and civil service are infallible. Government officials see themselves as above the people, who they consider as subjects to be “administered” rather than citizens who can manage their own affairs.

In terms of scope, the political handling of the Anglophone crisis has mostly followed the ‘administrative’ path that characterises Yaoundé’s political culture. Indeed, the symbolic provisions of the English-speaking regions’ special status were considered inadequate because they benefited only the administrative elites concerned.

The conflict in the North-West and South-West isn’t driven by these elites but by poor and relatively educated young men. These youth are determined to fight with rudimentary weapons against well-armed and trained defence forces. They also clash with elites who they accuse of having little concern for their fate. Any viable political solution must prioritise these active minorities who prevent the return of stability in the former Southern Cameroons.

Military successes shouldn’t lead Cameroon into complacency. South Sudan’s experience indicates that few secessions in Africa have resulted from military victories but rather a shift in external political dynamics. Cameroon faces a situation in which military gains are nullified by mounting pressures for political negotiations from outside the country.

To date, Cameroon’s fight against separatist forces has benefited from the leniency and even cooperation of the Nigerian government leadership. There is no guarantee that this situation will endure, particularly as the new United States administration could take a tougher stance on human rights.

To revive national cohesion, Cameroon’s government needs a political solution that encourages active minorities to lay down their arms and turn away from secession. For this to happen, the administrative half-measures put in place must end, and the problem must be treated with more than lip-service and slogans. Rejecting a return to federalism in the name of territorial integrity is one such slogan often used by civil servants and government representatives.

More than ever, dialogue with all sectors of the English-speaking minority and even the option of federalism must be on the table. Cameroon must avoid sacrificing national cohesion for the obsession with formal territorial integrity. Instead, the country needs innovative ways to forge unity and celebrate its cultural diversity. Cameroonians themselves must reinvent this new form of living together. DM