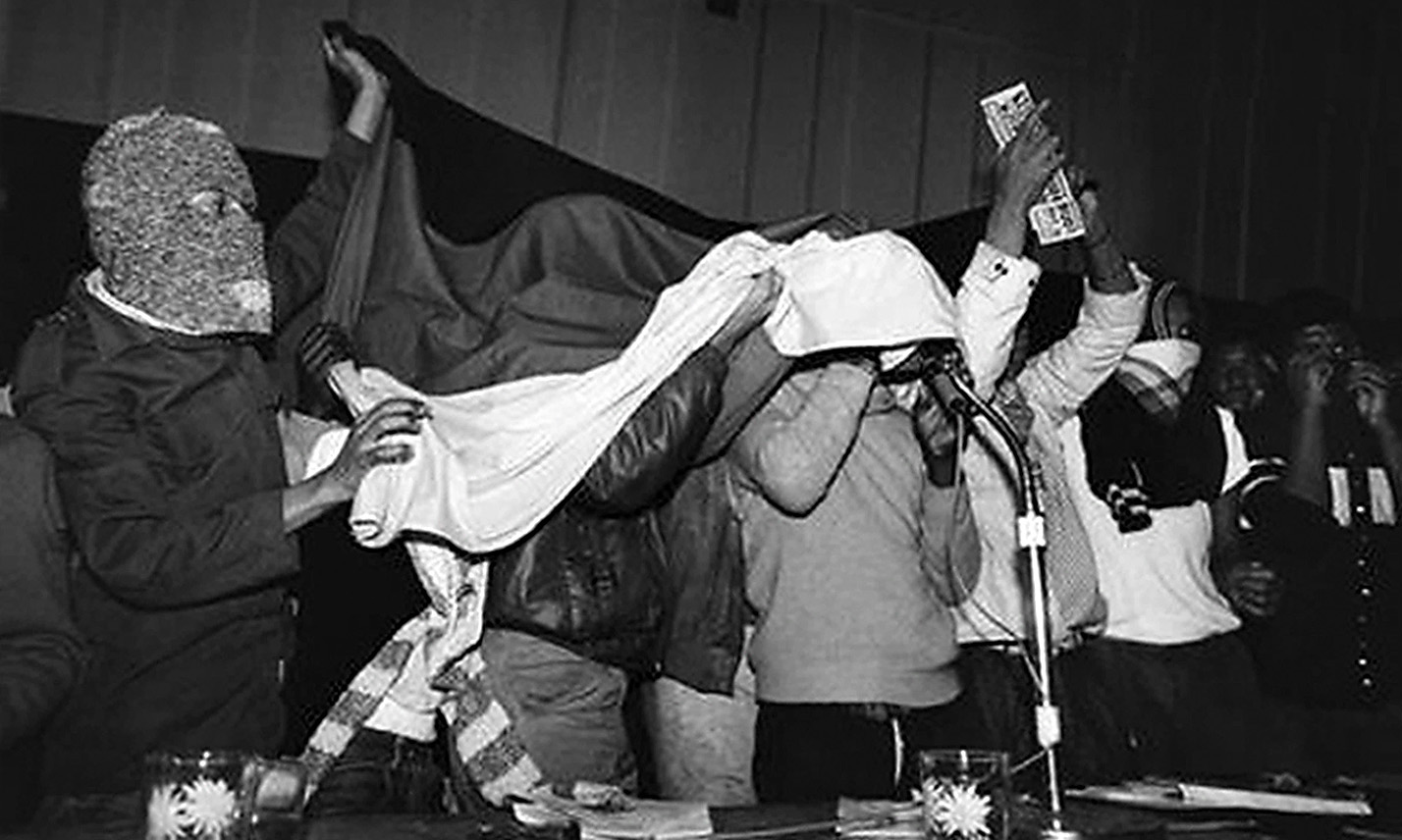 Masked members of Bonteheuwel Military Wing raised the flag of the ANC during a meeting held in Cape Town in 1987. (Photo: Supplied)

Between 1985 and 1987, unrest broke out across South Africa. At Bonteheuwel High School, learners took up arms and fought against the South African Police and South African Defence Force, which helped enforce the policies of the apartheid regime.

The resistance fighters known as the Bonteheuwel Military Wing (BMW) were trained by Umkhonto weSizwe (MK) in guerrilla warfare and the use of weaponry. Some learners were killed during the liberation struggle and about 19 are still alive. Those who lost their lives were Ashley Kriel, Anton Fransch and Jacque Adams.

On Monday, 22 March, Maverick Citizen caught up with former BMW members Colin de Souza, Abubakr Williams and Shahied Cassiem in Bonteheuwel. For the first time, apart from two university researchers, they candidly talked about what led to the formation of the BMW, their clashes with security forces and whether there were any regrets or hair-raising moments.

De Souza explains that the BMW was initially formulated in 1985, but only became fully-fledged in early 1986 after the community became aware there was a military structure in Bonteheuwel.

The BMW, he said, was formed out of MK cells that existed in Bonteheuwel during the student uprising in the 1980s. At that time the police clashed with learners during protests, raided schools and detained both learners and teachers.

“The continued beating of learners and teachers gave rise to the establishment of action committees. There was a call for uprising, but when it came to defend ourselves against police there were two mindsets.

“We had the intellectual group who opted not to engage in violence and a radical group inspired by the ANC who decided to take up arms and defend us against the army and police,” De Souza said.

What followed, he said, was six months’ training in guerilla warfare. In the beginning, the comrades operated as a soccer team pretending to practice on the Metropolitan Sports Field, but in reality were being trained in the making of petrol bombs mixed with chemicals, homemade zip guns and the use of Russian weapons, he added.

“In Bonteheuwel, the BMW were fighting SAP (South African Police) and the South African Defence Force, who was based in the area to quell the unrest. The police tried to put up satellite police stations, but they didn’t succeed because the BMW blew it up”, he said.

On how they managed to achieve this, Williams interrupted the interview and said that at times hundreds of students took to the streets and threw stones in different parts of Bonteheuwel.

“This was a diversion and when police responded to the protest, it created a gap for the BMW to slip through and petrol-bomb the satellite police mobiles in the area,” Williams said.

Initially, weapons didn’t reach the BMW, Williams said, adding but arrived at a later stage in late 1987. Large caches were sent to Bonteheuwel to reinforce the BMW. They were buried in secret locations in the area, he said.

De Souza said that during 1986, petrol stations were instructed not to sell fuel to the youth and people with kannetjies. But school teachers with cars filled up their tanks which were emptied when they returned, he said.

“Petrol bombs were made and hidden in school classrooms. Religious leaders, the postman and even the council inspectors, after their houses in the area were attacked, later came aboard in the struggle.

“A lot of police officers used to stay in Bonteheuwel, but in 1987 they gradually moved out of the area after their houses had been petrol bombed. If you were a police officer, you were either with the state or with the community,” De Souza said.

Describing one of BMW’s hair-raising moments, Williams recalled a rally held in 1987 in the Bluegum Civic Centre. Thousands of people were bused in to listen to prominent religious leaders and academics.

“The centre was surrounded by police and the army. BMW came to the meeting draped in an ANC flag. Although we had an armed attack plan in place, we couldn’t execute it because of the large crowd. When the leadership and the crowd came out, the police gave the crowd two minutes to disperse.

“The crowd kept singing and marched towards the police. All hell broke loose when the police opened fire. I have never seen so many people running from Bonteheuwel towards Langa,” he said.

Outlining a plan to attack the SAP, Williams explained that BMW members were placed at strategic points in the area. Part of the plan was to set alight tyres at the main road leading into Bonteheuwel.

“It was an ambush tactic. Once the last bus had left the area we would have attacked the police with homemade guns and advanced petrol bombs mixed with chemicals,” Williams explained.

Cassiem said the “young military wing” rose into prominence because of the need to redirect the struggle. “We were instrumental in fighting against the then Minister of Law and order Adriaan Vlok and Minister of Defence Magnus Malan,” he said.

“Besides embarking on mass action, the BMW carried out thousands of secretive military operations which led the to the group of young lions being detained and charged with 30o [counts] of public violence, arson, sabotage, attacks on the homes of members of the SAP and furthering the aims of the banned ANC,” Cassiem said.

In a Weekend Argus article dated 24 October 1987, Vlok announced that police had arrested a group of teenagers in Bonteheuwel who had been linked to the ANC. Police said the 23 arrested teens were responsible for a reign of terror and violence in Bonteheuwel.

The 23 BMW members were arrested on 2 October 1987. They were charged on 18 November 1987. Twenty were acquitted and only De Souza, the late Jeremy Swarts and John de Vos were charged. De Souza was handed a seven-year sentence, De Vos 10 years and Swarts five years. When they were released the liberation struggle was over.

The Truth and Reconciliation Commission (TRC) final report confirmed that BMW established links to the ANC and MK. The TRC report further states that during 1986, an MK operative known as “the General” provided some training and armaments such as Makarov pistols, limpet mines, grenades and an RPG-7 anti-tank rocket launcher.

Fourteen statements heard at the TRC revealed the torture BMW members suffered at the hands of police. The TRC heard young activists were deliberately placed among criminals who repeatedly raped them.

One of the BMW members, 14 at the time, was arrested in February 1987 and taken to the Bishop Lavis police station where a Sergeant Todd forced his head into a toilet bowl which he then flushed.

Reflecting on the sacrifices made, De Souza, Williams and Cassiem stressed the importance of not forgetting those who fell. He acknowledged there were some informers among them who contributed to the death of some BMW members.

Looking on the bright side, De Souza said: “Look at where the struggle has brought us today. We fought for freedom and our people got it and that in itself is a great achievement.

“Young teens and children between the ages of 14 and 18 took up arms. A lot of adults were too scared and we fought their battle. It is something to be proud of.” MC/DM