The Possessed: A sojourn with Russian writers 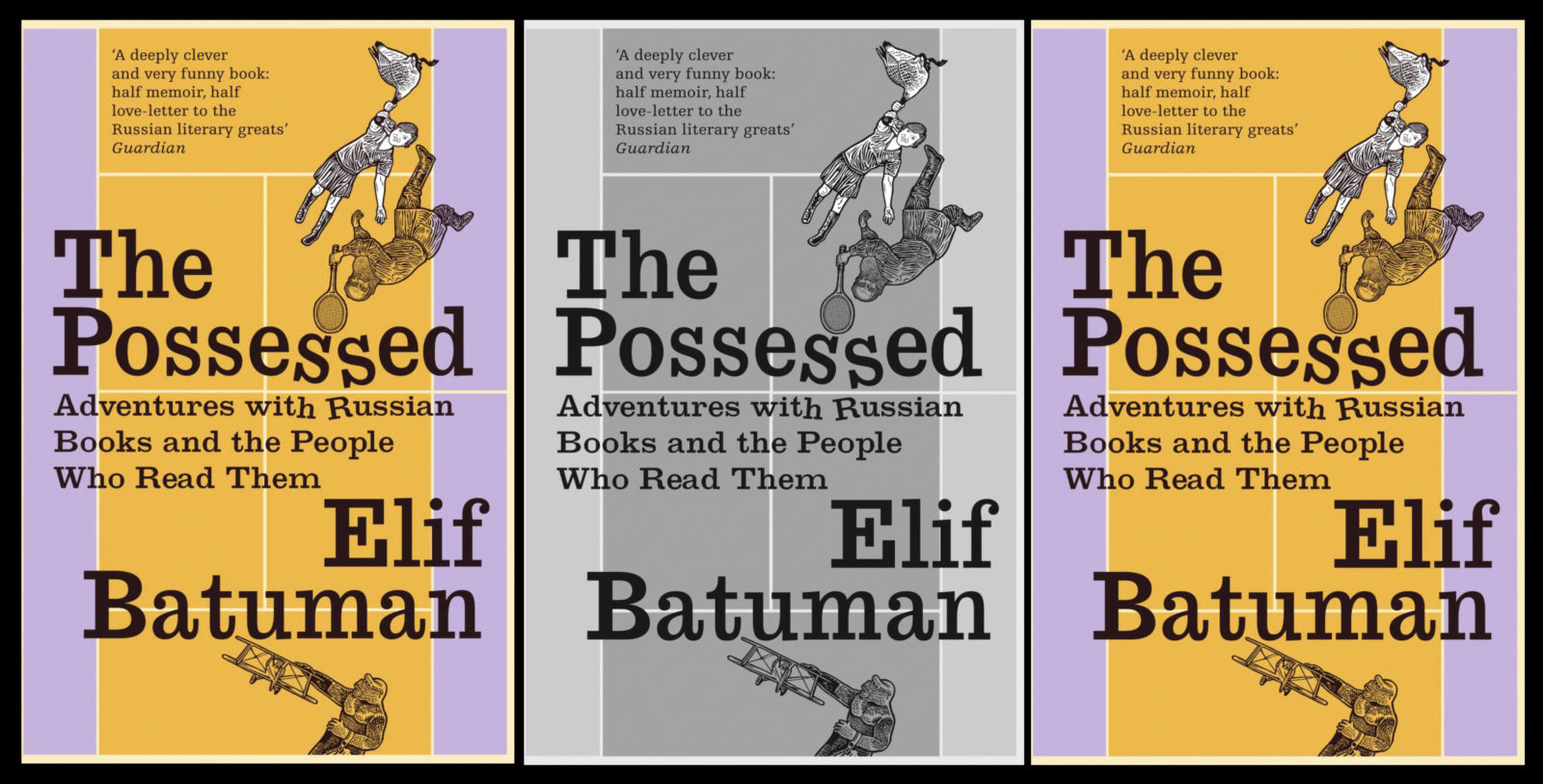 ‘The Possessed: Adventures with Russian Books and the People Who Read Them’ by Elif Batuman, Farrar, Straus and Giroux (2010).

Locked down, locked in, many of us have had time to read more books than ever before. Readers, passionate about their own favourite books, are curious to know what writers have been reading during this bleak and lonely period. What was already on their shelves, what did they borrow, buy or read online?

In this series, Reflexions: Reading in the present tense, established and younger writers and other creative artists will reflect on a text that moved them, intellectually engaged them, frightened them or made them laugh. Our reviewer today is Rosa Lyster who considers The Possessed: Adventures with Russian Books and the People Who Read Them by Elif Batuman.

Like most people, I had plans for 2020. Unlike most people, who give at least the outward impression of being accustomed to setting forth with a clear agenda in mind, this was a rare occurrence for me. I hardly ever have a plan. My usual idea of “looking ahead to the next six months” generally involves not much more than a conviction that I should probably work a bit harder and also not do anything that will cause my career to become flushed down the toilet. But 2020 was different. For once, I had serious, concrete plans, every single one of them entirely dependent on the possibility of international travel.

It took me what I now understand was a weird amount of time to accept that everything I’d had in mind was no longer possible. I knew of course that my own personal thwartedness was not a big deal at all given the actual epoch-defining catastrophe unfolding. I was aware that every single person I knew or had heard of or read about or imagined was experiencing some version of this, except probably worse, but still I just could not believe it. I spent a lot of time walking around the flat in circles, actually pacing.

There are obviously all sorts of disadvantages to that level of thought-obliterating restlessness, but a particularly bad one for me was that I stopped being able to read. Reading is and always has been my refuge and my favourite thing to do, and it was suggested to me by numerous people that I could or should use these months of enforced stillness to read whatever I wanted. I couldn’t do it. There was the problem of not being able to concentrate, obviously, but more than that, I started to hate the idea that books were capable of providing consolation or diversion at such a moment. The whole notion of “reading as escape” seemed suddenly ludicrously inadequate, possibly offensive. Would it not just remind a person stuck in a flat that in fact she could not escape, and that there was a whole world out there that she was currently barred from accessing? Should there not be a harsh historical reassessment of the person who invented the idea of “armchair travel”?

I probably would have gone on like this for months if I hadn’t seen the spine of Elif Batuman’s memoir The Possessed: Adventures with Russian Books and the People who Read Them sticking out of the shelf during one of my afternoon pacing sessions. The book, published in 2010, is a connected series of essays about Batuman’s time as a graduate student in the Russian Literature department at Stanford University, California. In the introduction, she asks, “How does someone with no real academic aspirations end up spending seven years in California studying the form of Russian novel?”

The subsequent chapters approach the question in different ways: in one, she visits Tolstoy’s estate to participate in the international Tolstoy conference. In another, she spends a summer in Samarkand, trying to learn Uzbek: “It was all just like a Borges story – except that Borges stories are always so short, whereas life in Samarkand kept dragging obscurely on and on…what did you know about Uzbekistan once you learned that old Uzbek had a hundred different words for crying? I wasn’t sure, but it didn’t seem to bode well for my summer vacation.”

She goes to St. Petersburg to visit the replica of Empress Anna Ivanovna’s ice palace: “The ice palace had no clear purpose, but many unclear purposes. It was a torture device, a science experiment, an ethnographic museum, a work of art. It was a suspended disaster, a flood momentarily checked, a haunted house, a distorted fairy tale, with its transparent coffin, parodic prince and dwarfs.”

My favourite essay, Babel in California is about Isaac Babel’s life and writing, Batuman’s growing understanding of the relationship between the two as she begins to write about his work, and her participation in an international Babel conference at Stanford. This is the shortest and most accurate way to describe the chapter, but it does make it sound boring at best, and at worst the kind of thing that would only interest someone who had spent way too long in academia. In reality, it’s one of the funniest pieces of writing I can think of, as well as one of the saddest.

Babel was executed in 1940 after being arrested by the KGB on fabricated charges of espionage, and Batuman’s enumeration of everything that was lost with his murder is a beautiful summary of a life’s work. You do not need to have read Babel to admire her writing about him, and you do not need to have personally attended an academic conference to enjoy her recounting of the international gathering of Babel scholars along with the star guests, Babel’s daughters and his widow. Batuman has an astonishing gift for description, managing to produce accounts not just of how the people around her look and talk, but of the effect they have on others.

Recounting a terrible conference dinner where Babel’s daughter Nathalie accuses an academic of despising her (“ ‘JANET,’ ” Nathalie said finally in her fathomless voice, ‘IS IT TRUE THAT YOU DESPISE ME?’ ”), Batuman says, “I was struck by the nontrivial truth of the Smiths’ song: ‘Some girls are bigger than others.’ It wasn’t just that Nathalie Babel’s face was physically larger – it was somehow visibly clear that she came from a different place and time, where the human scale was different, and bigger.”

I have read the book at least annually since its publication and have always found it to be exactly what I felt like reading no matter my circumstances at the time (trying to finish a PhD, debilitated by shyness at the prospect of chaperoning a famous writer at the Open Book Festival one year, break-ups, passport stolen on a train, suspecting myself to be out of my depth at a conference and then delivering a paper which was received in a way that resoundingly confirmed that suspicion, other break-ups). When I opened the book again this year though, it felt like a solution. Not the solution – I was still miserable and restless and the world was still the world – but at least something. Maybe I just mean that it made me feel better.

Batuman, clearly, is a person whose life revolves around books, who sees them not as a refuge or an escape but a beautifully illuminated entryway into the business of living. Describing her initial lack of interest in history as an undergraduate, Batuman says, “It struck me as narrow-minded to privilege historical events simply because things happened to have worked out that way. Why be a slave to arbitrary truth? I didn’t care about truth; I cared about beauty. It took me many years – it took the experience of lived time – to realise that they really are the same thing.”

In Babel in California Batuman talks about reading the Red Cavalry cycle: “There are certain books that one remembers together with the material circumstances of reading: how long it took, the time of year, the colour of the cover.”

When I think of reading The Possessed in June of last year, I don’t think about how long it took, or the colour of the cover. I think about sitting on our sofa next to the neighbour’s cat, listening to the rain outside, looking at all the unread books on my shelves and thinking, Thank God. Something to think about for the next little while. Something to do. DM/MC/ML

Rosa Lyster is a writer living in Cape Town. Her work has been published in the New Yorker, the London Review of Books, The New York Times and The Guardian, among other publications. Modern Rasputin (uHlanga), a collection of her poetry, appeared in 2016. She is writing a book about the global water crisis, to be published by Random House and Jonathan Cape in 2023.