Who’s winning the struggle for the wounded heart of the ANC? 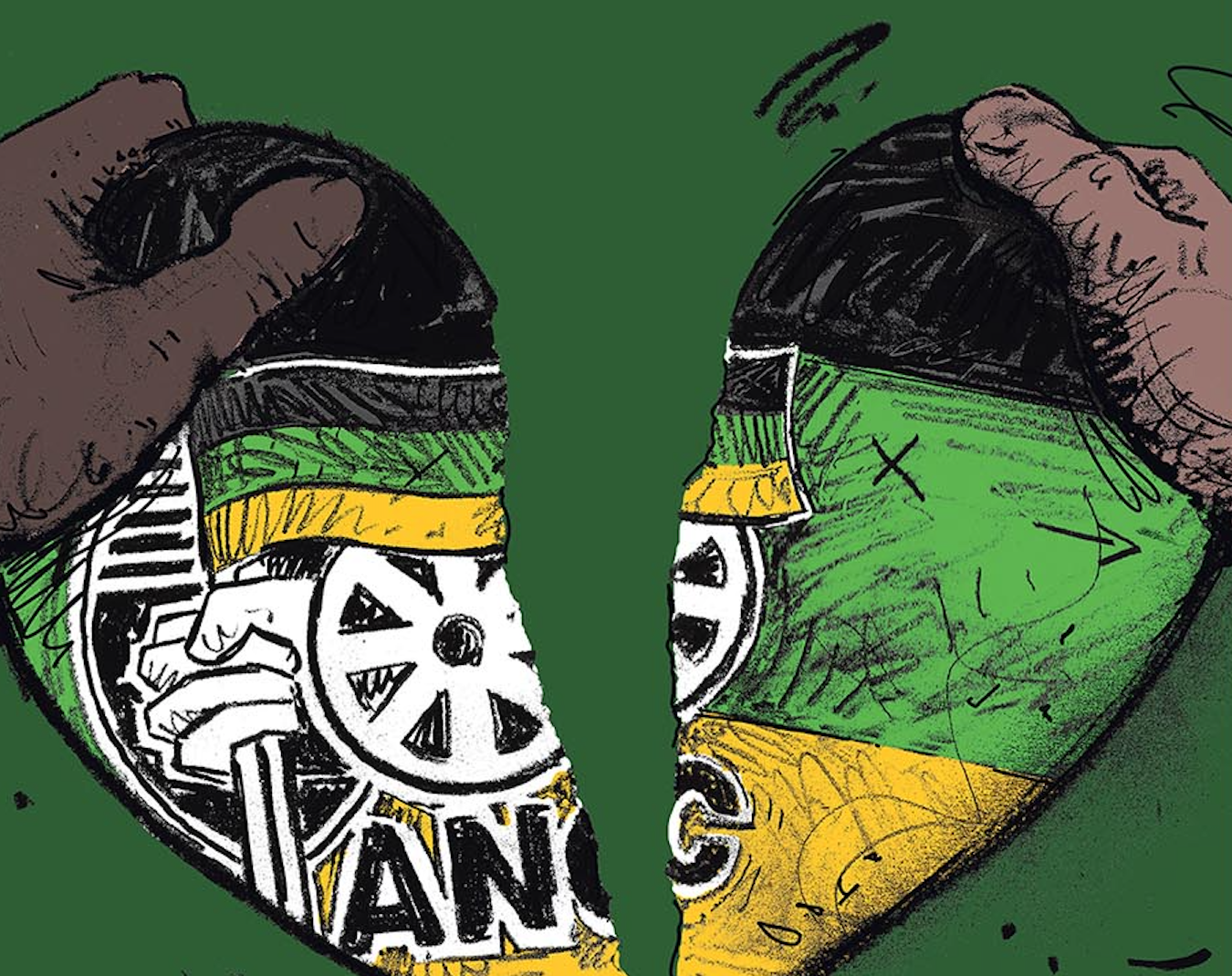 Cyril Ramaphosa’s position in the very fractured governing party he leads has been strengthened by the support of the ANC’s national executive committee and its parliamentary caucus.

The hybrid virtual and physical meeting to whip ANC MPs into line did not take more than 20 minutes and only two men spoke: ANC Secretary and Minister of Mineral Resources and Energy Gwede Mantashe and ANC Treasurer-General Paul Mashatile.

Also present on the virtual call on Tuesday, 16 March were President Cyril Ramaphosa and his deputy DD Mabuza. The two did not utter a word. But the message was clear: ANC members were to vote to support the establishment of the inquiry into the fitness of Public Protector Busisiwe Mkhwebane to hold office. Mashatile was even more forthright, telling the caucus that the ANC leadership will not take kindly to those who defy its position.

Conspicuous by their absence were Secretary-General Ace Magashule and his deputy Jessie Duarte.

By the end of the day, the ANC had overwhelmingly voted to support the establishment of the parliamentary inquiry to investigate Mkhwebane.

An independent panel headed by retired Constitutional Court Judge Bess Nkabinde found there was a prima facie case of misconduct by Mkhwebane. It recommended that a committee of the National Assembly launch an inquiry into Mkhwebane.

Ramaphosa’s backers say his silence during the short caucus meeting was a strategic move – he is entangled in a legal fight involving the Public Protector’s report on his CR17 campaign funding.

Last week the North Gauteng High Court reserved judgment in the case brought by the EFF to have the bank statements of the CR17 campaign unsealed. The records were sealed by the same court after Ramaphosa successfully challenged Mkhwebane’s report suggesting the president had lied to Parliament about a donation to his campaign ahead of the 2017 Nasrec ANC conference.

If the events of the past week are anything to go by, Mkhwebane’s days are numbered. 275 MPs voted in favour of the inquiry, with only 40 objecting. To remove the head of a Chapter 9 institution requires a two-thirds majority (266) of the 400-member National Assembly.

In the Public Protector’s corner is Magashule, who told Durban-based Gagasi FM a day later that the MPs who left the hybrid parliamentary session ahead of the vote had done the right thing. Voting with the DA on its sponsored motion was tantamount to “sleeping with the enemy”, he said, breaking ranks with the rest of the ANC’s Top Six.

He said: “The ANC cannot change its character, the ANC cannot sleep with the enemy. We have always defined [opposition], especially the DA, as the enemy of the revolution.”

But Magashule finds himself isolated. The ANC will hold the crucial national executive committee meeting (NEC) meeting next weekend, in which the party is meant to finalise its guidelines on the contentious “step aside” rule. The presence of four members of the Top Six at the caucus meeting underlined his isolation.

ANC spokesperson Pule Mabe has confirmed the NEC meeting will take place on 26-27 March. Mabe said the meeting will be preceded by an NEC “training workshop” by the party’s Integrity Commission this weekend.

Despite the vociferous public statements and open letters by Magashule supporters like former North West premier Supra Mahumapelo and Umkhonto weSizwe Veterans’ Association chairperson Kebby Maphatsoe, none of them objected or abstained from the vote during the National Assembly plenary session to decide on the Independent Panel’s report on Mkhwebane. According to parliamentary voting records, Mahumapelo voted yes on the virtual platform.

The plenary took place on Tuesday afternoon after the ANC’s emergency caucus meeting.

With 230 of the 400 seats in the National Assembly, the ANC had 168 members during the hybrid plenary where some members were in the chamber while others attended virtually.

Now the party’s caucus will institute an audit of the figures of those who attended and who among them had left the platform at the time of voting.

Maphatsoe told DM168 whether he voted for or against the motion did not matter. “This is just the first phase, which only required a simple majority. The second phase is where we will vote to adopt or reject the inquiry report … that requires a two-thirds majority.

According to an NEC member who is a senior parliamentarian, some of those who had spoken out against the ANC supporting a DA-sponsored motion ended up voting in favour of the inquiry

“Some of them voted. I don’t think they had the courage. To say that 62 ANC MPs did not support the motion is misleading. Our understanding is that those who left the virtual platform [during the voting] were 20-something. Other people had legitimate reasons for their absence. But we’re still going to do the audit,” said the NEC member, who is not authorised to speak on party members.

It is also understood that some of those missing were ministers. “The seating was not treated as a three-line whip, where all of us must be in Parliament. But even without them, the vote went through smoothly,” said the NEC member.

With the letters sent by Mahumapelo and Maphatsoe – ahead of the vote – having been leaked publicly, it seems their objections to the vote did not gain any traction inside the party.

As with the last NEC meeting, Ramaphosa appears to have the upper hand inside the party’s leadership structures. The last NEC meeting, in February, agreed to adopt the guidelines prepared by the task team, headed by former president Kgalema Motlanthe. These guidelines reaffirmed the earlier position taken by the party’s Integrity Commission that those accused of corruption should step aside. In December 2020, the commission recommended that Magashule be asked to step aside, failing which the party should remove him.

The final guidelines will now be presented at the NEC meeting next week, the NEC having tasked the Motlanthe task team to consider complex issues such as explaining how the “step aside” rule will apply to MPs. Closing the NEC meeting last month, Ramaphosa said the party would ensure the “immediate implementation” of the guidelines.

“In the meantime, the NEC calls on affected members to act in the interest of protecting and enhancing the integrity and credibility of the organisation and step aside voluntarily in line with the recommendations of the Integrity Commission and the [Nasrec] conference resolution,” Ramaphosa had said.

With the finalisation of the guidelines in the offing, the ANC Top Six will also table all the reports and recommendations of the Integrity Commission, including the one on Magashule.

Magashule’s comments during the radio interview also did not sit well with some members of the NEC.

Said one member: “He’s behaving recklessly, he knows his days are numbered. There’s nothing more he can do.”

Another NEC member sympathetic to Magashule said the former Free State premier was making some “blunders”, having found himself backed into a corner. “The SG keeps making these mistakes as he is fighting his own battles and there’s nothing anyone can do about that,” said the NEC member.

As Magashule fights for his political life, he does have the ANC Women’s League in his corner. Through its president Bathabile Dlamini, it has made it clear it regards the criminal charges against Magashule as a political plot.

Last week Dlamini led a group of Women’s League leaders to Nkandla to visit Magashule ally former president Jacob Zuma. During that meeting Zuma bizarrely told the Women’s League his defiance of the Constitutional Court ruling – that he should appear before the Zondo Commission – was not because he did not respect the courts.

“I realised that my rights, which I fought for, were being trampled … it is not because I’m a delinquent,” said Zuma in isiZulu.

At the same time, there are growing voices in support of the Constitution. ANC veterans and civil society formations have come together under the banner of Defend Our Democracy, including ANC veterans Mavuso Msimang and Cheryl Carolus. Organisations such as the SA Council of Churches, Mmusi Maimane’s One SA Movement and the SA Communist Party are also behind it.

At a launch this week, they said the Constitution was under threat. “For more than a decade, parliamentary and political accountability, particularly under the governing party, have been seriously undermined. Signs of the government’s increasing inability to protect its citizens have caused great anxiety among our people. The restiveness in the population has grown as various institutions of governance have been severely tested, some to breaking point,” said the grouping.

Defend Our Democracy deplored Zuma’s defiance of the Constitutional Court.

“This astonishing defiance by a former Head of State not only violates the law but assails the Constitution itself. While the normal institutional processes necessitated by such an attack on our Constitution are underway, the former president, frustrated by the impeccable conduct of an independent judiciary, has now launched a malicious attack on the judiciary itself, particularly on the Constitutional Court, the cornerstone of our Constitution,” said the group in a statement.

They called for united action and warned that if not enough South Africans stood up in defence of the Constitution, the country runs the risk of returning to a “totalitarian order that brought such misery and suffering to its people”.

“We, therefore, call on all people of goodwill to vigorously oppose this threat to our democracy and to stand united against those intent on violating the values and principles embodied in our Constitution,” said the statement. DM168