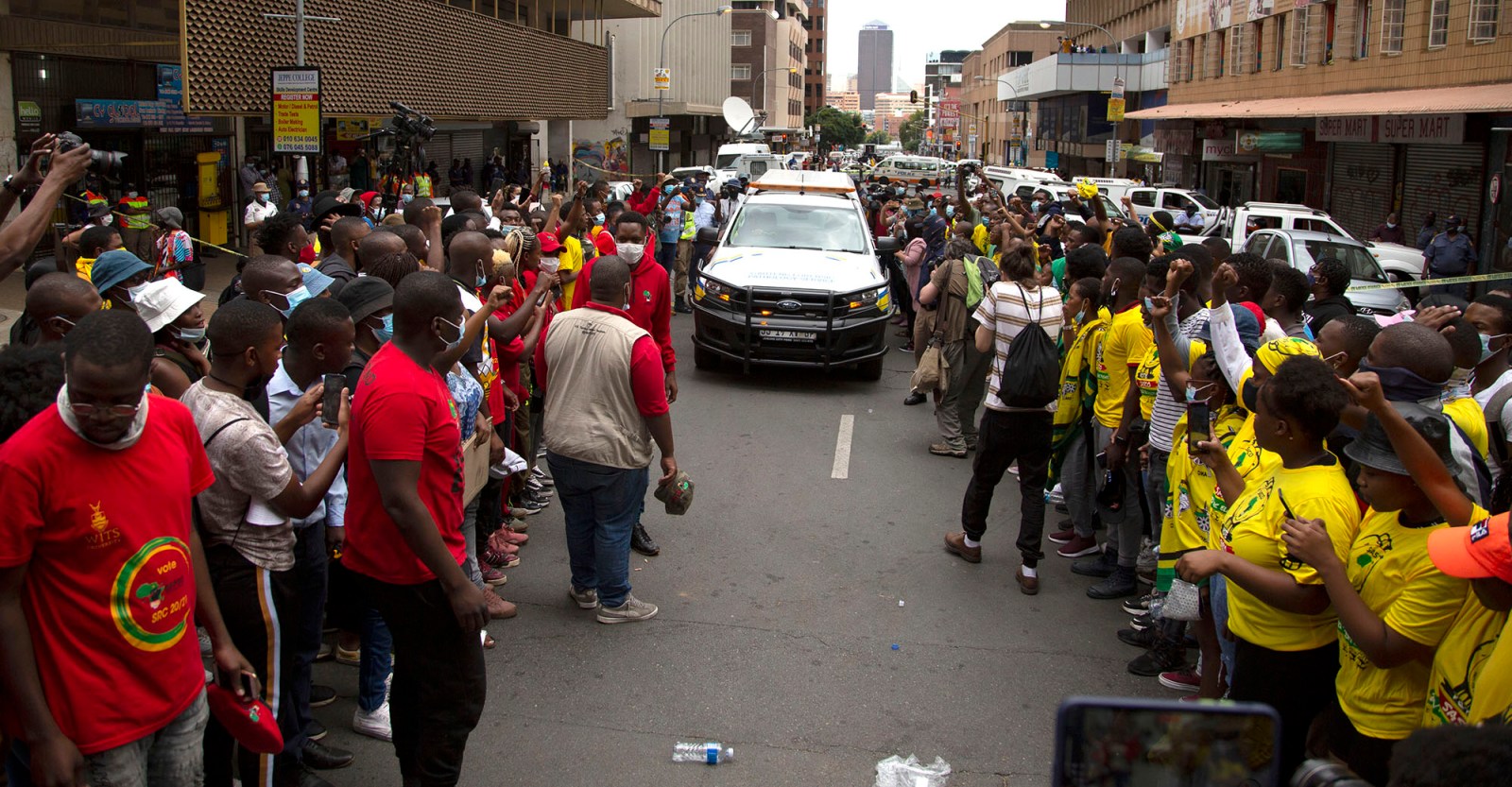 It has become an annual event: students protesting over lack of access to funding. The politicians are just being opportunistic.

Mpendulo Mfeka couldn’t afford to pay his registration fees when he arrived at Wits University in 2014. He joined a student protest that led to the upfront registration payment requirement being scrapped. Seven years later, after leading the university’s South African Student Congress’s branch during the Fees Must Fall demonstrations, Mfeka is still protesting.

“What is going to make a difference now is that students are tired. They have been doing this forever and they are willing to go to the extreme to achieve their aim,” said Mfeka, who is now Wits SRC president and has been leading demonstrations in recent weeks.

Students at multiple universities marked the beginning of the 2021 academic year by protesting against financial exclusion and calling for a national shutdown. Such protests are now annual events that often result in short-term victories for students without solving the intractable problem of higher education funding, which has been aggravated by the deteriorating economy and political opportunism.

The 2015-17 Fees Must Fall protests highlighted the cocktail of challenges at varsities – decolonisation, gender-based violence, accommodation, hunger – but the most pointed issue is money: deserving students are excluded from studying because they can’t pay their debts and National Student Financial Aid Scheme (Nsfas) funds are limited.

The per-student funding amount the state pays to universities has been in decline for more than a decade, meaning institutions impose obstacles on fee-paying students to recoup debts. Those debts have ballooned in the sector over the past five years to between R10-billion and R13-billion.

Student organisations have demanded that the state intervene and cover those debts, which Department of Higher Education officials say they cannot afford.

Wits student Unako Dubula has not faced financial exclusion, but joined the protests with her classmates. “I wouldn’t want to find myself in such a situation. That’s why I’m here, to join in speaking out for my fellow students. It’s good to join them in the fight before things get dire for them and maybe for me,” she told DM168.

Another Wits student, Mike Mpanya, said: “These are brilliant students that would be excluded if things continue the way they are. They are not allowed to register. The only basis someone can be excluded from education should not be because they are poor and can’t pay their fees.”

Higher Education Minister Blade Nzimande told Parliament this week: “We have not been caught unaware.” He added: “The issue has been: where are we going to get the money from?”

Nzimande’s department knew what was probably coming but failed to act. It started planning for the current academic year in November 2020. Because of the economic crisis, Nsfas’s budget to fund students in 2021 was cut by about R6-billion while, at the same time, more students qualified for funding thanks to job losses, said Nzimande.

South African Union of Students (Saus) president Misheck Mugabe told DM168 his organisation had requested a meeting with Nzimande’s department on funding guidelines and registrars’ planning as far back as November, as per tradition.

Discussions reached a “breaking point” when Nzimande did not show up to a meeting but sent Deputy Minister Buti Manamela with “no tangible answers to the matters raised by students”, said Mugabe. “The financial exclusion of students coupled with unsatisfactory responses from the ministry made a national shutdown inevitable.”

The state has buckled in response to the protests and was forced to find the money to support thousands of students who qualify for Nsfas, reallocating about R6-billion in the Budget, which had cut higher education spending to contain spiralling debt costs. More than half of the R6-billion will be taken from the National Skills Fund, which supports unemployed youth.

Universities have also made provision. Many have either reduced the portion of debt students must pay before registering or allowed indebted students to register after signing acknowledgement-of-debt notices.

Neither the leeway offered by universities nor the state’s budget reallocation will solve the ongoing crisis. 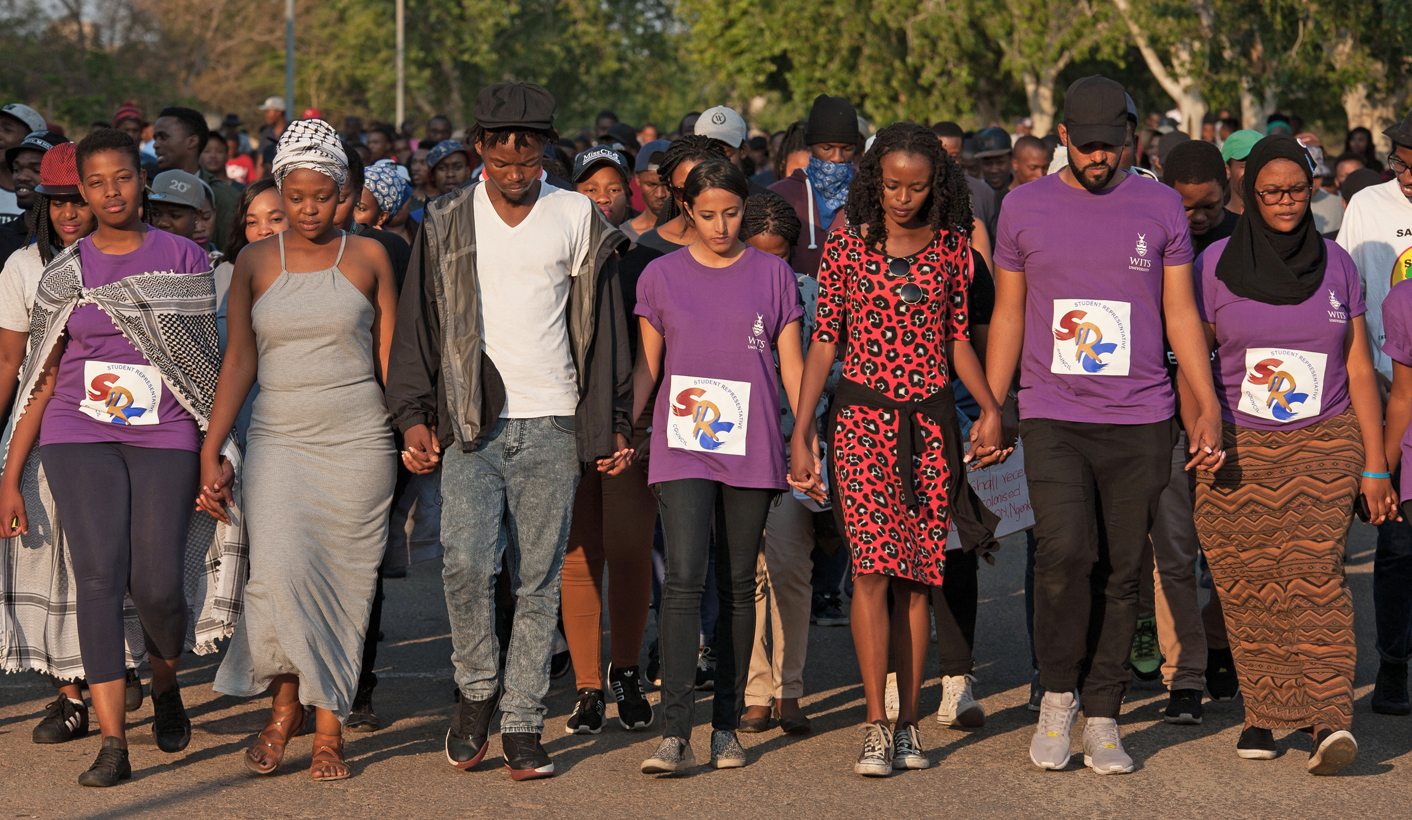 Current fee-paying students are still lumped with restrictive debt; future students will continue to struggle to pay their fees; the demand for Nsfas funding will outstrip supply. So protests will continue with young activists, often kids not long out of high school, at the forefront, confronted by Public Order Police and security officers.

Students and vice-chancellors have repeatedly called on the state to find a lasting solution to the higher education funding crisis. In 2015, Fees Must Fall activists led a historic protest at the Union Buildings and former president Jacob Zuma responded by announcing there would be no fee increases at tertiary institutions in 2016.

Whereas fees increased in the subsequent year, on the eve of the ANC’s 2017 December elective conference Zuma opportunistically announced the state would provide free higher education for the poor and working-class. Students from households with incomes up to R350,000, up from about R120,000, would qualify for Nsfas and would receive bursaries rather than loans. Zuma had applied a porous plaster to a gaping wound.

Professor Ahmed Bawa from Universities South Africa told DM168 this week that students from historically disadvantaged universities had been protesting over fees for the past 20 years.

“There is no question that we need a new student funding policy process that addresses this issue sustainably,” he said.

The state increased VAT to fund Zuma’s Nsfas expansion but, as this year has shown, that funding is not guaranteed, nor will it reach all qualifying students.

The then president’s announcement, which appeared to be aimed at bolstering support for his faction ahead of the ANC election, did not address the perennial problem of the “missing middle”, which is students who come from families that make too much to qualify for Nsfas but still struggle to pay fees.

It completely ignored the findings of the Heher Commission on higher education funding, which found the state could not afford free education and should offer loans, backed by the banks, to all students, to be repaid on an income-contingency basis that would be managed by the revenue service.

Student movements, which opposed Heher’s recommendations, have always been vulnerable to such political opportunism. The Fees Must Fall movement mobilised a cross-section of students and society by presenting a unified front. It dissipated amid allegations of interference from its leaders’ affiliated political parties. There was even an alleged effort by the State Security Agency to influence its agenda.

Such political opportunism and short-term interventions could continue as students continue to threaten to shut down their universities.

Umkhonto weSizwe Military Veterans’ Association (MKMVA) spokesperson Carl Niehaus arrived at the Wits protest a week ago after 35-year-old Mthokozisi Ntumba was killed, allegedly by police officers, four of whom have been charged, during a protest in Braamfontein.

Niehaus and his “radical economic transformation” faction of the ANC are fighting for their careers and ANC leadership.

Niehaus’s boss, ANC Secretary-General Ace Magashule, then marched with students, calling on the government to find the funds for free education.

Writing for Eyewitness News this week, former student leader Mcebo Dlamini, now an adviser in the Office of Johannesburg Mayor Geoff Makhubo, said of the ongoing student struggle: “Most importantly, students must be united. Any division will weaken the movement. Narrow political interests must not be entertained.”

Current student leaders have emphasised the need to unite across political affiliations and prioritise their constituencies. Nzimande and Manamela have committed to finding a long-term solution to higher education funding, but they haven’t committed to any specific interventions.

Student leaders are due to meet Nzimande this weekend. That meeting will probably determine whether protests continue.

“Everyone must come together as a collective force to demand the change in our education system that we want to see happen,” said Mfeka. DM168