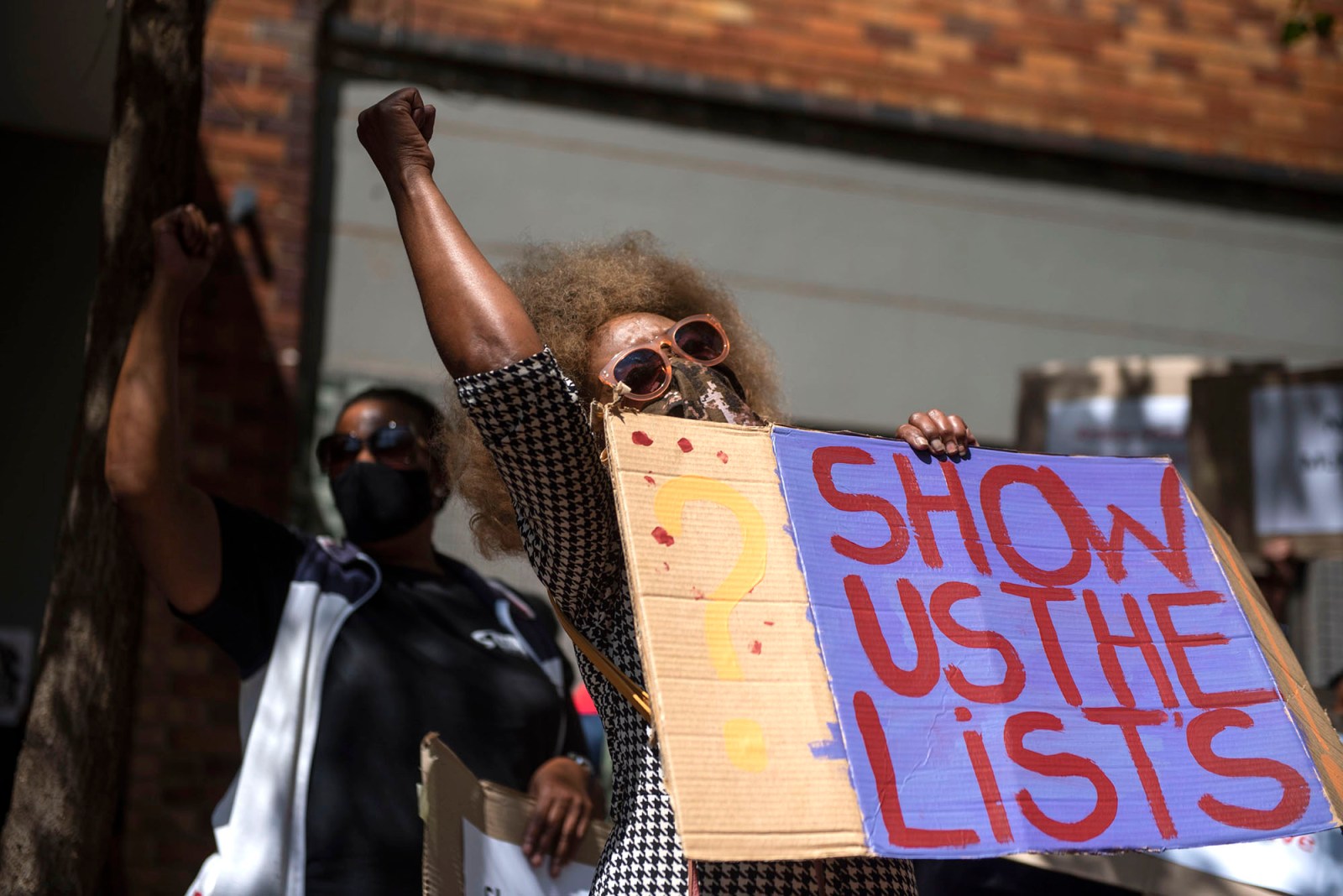 Mercy Pakela in front of the National Arts Council (NAC) in Newtown. She and several other artists have been participating in a sit-in at the NAC.  They are demanding answers to questions on funding irregularities connected to the Presidential Economic Stimulus Package (PESP), which was meant to rescue a sector blighted by Covid-19.  Artist from all disciples will be participating in these Protest Art Performances during the week (Photo by Alet Pretorius)

The woeful neglect by the arts ministry and pressures wrought by the pandemic may just be the final nail in the coffin for SA’s arts sector.

Five years ago Thapelo Mokhutshoane, a theatre practitioner from the North West, received funding from the National Arts Council (NAC), “but to get the money I had to come to their [Johannesburg] offices, kicking and screaming, because they hadn’t paid me and I needed answers”, said Mokhutshoane.

Now, Mokhutshoane, with about 20 other artists, is holding a sit-in at the NAC offices demanding answers regarding the R300-million Presidential Employment Stimulus Programme that the council was tasked to disburse to the sector.

Shortly thereafter, artists began their sit-in at the NAC’s offices.

With the hard lockdown, the arts and culture sector, like many other industries, was decimated by the prohibition of public gatherings. A South African Cultural Observatory study published in November 2020 found that 90% of the live music industry had lost income owing to Covid-19 and 25% of artists indicated that they would not be able to continue with any elements of their business under lockdown.

“A few years ago, I had a book published. I applied for a grant to help me promote the book, but I was rejected. Since then I’ve struggled to promote it. This department doesn’t care about us small writers; they’re more interested in funding bigger writers,” said Ntombela.

According to another South African Cultural Observatory report published in 2018, the arts and culture industry contributed R63-billion, or 1.5%, to the SA GDP.

The lack of income during the pandemic and the inadequate support from the department came as the last straw for many artists. These factors have pushed many in the arts sector to protest against the ineptitude of various arts agencies. Last month, Eugene Mthethwa, who was part of the kwaito group Trompies, chained himself at the Southern African Music Rights Organisation building, demanding his royalties payment.

On 14 March, during a Zoom meeting with the artists staging the sit-in in the NAC offices, council members apologised to the creatives for how they’d handled the stimulus package. “I really do apologise for all of this. With each and every meeting we’re going to have, we’ll have to apologise because we really didn’t want to be at loggerheads with the artists,” said Princess Celenhle Dlamini, the acting chairperson of the NAC’s council.

This wave of sit-ins we’re currently seeing by creatives is new. “The arts community has generally been passive within the broader social justice struggles in our country, as well as within and for their own sector. The most ‘radical’ actions to date have been numerous open letters that have been written to the minister or other officials. So, the occupations have been a sign of greater activism, probably reflecting greater desperation within the sector,” said playwright Mike van Graan.

But the story of how badly the Arts and Culture Department, which was merged with Sport in 2019, treats those in the sector isn’t new. Gwen Ansell, a creative arts researcher, said about the sports and arts and culture merger: “Although I can see why it made administrative sense, I think the merger has been a disaster.”

But the issues with the arts department and how it was viewed by the ruling party dated back to before liberation, said Ansell. “The ANC as a structure, as the late Bra Willie Kgositsile [South Africa’s first National Poet Laureate] said when he was reflecting on this … took 70 years before they had their own department of arts and culture [despite the fact that] a lot of ANC members and very prominent people like Bra Willie himself, Jonas Gwangwa, Miriam Makeba, had been deeply involved in the struggle.

“I think Kgositsile’s comment that [the arts department] is like a tolerated mischievous stepchild to some extent has always been true,” said Ansell.

When the democratic dispensation, led by former president Nelson Mandela, put together the first Cabinet, the first post-apartheid arts and culture minister was Ben Ngubane, a medical doctor who was an IFP politician.

Commenting on Ngubane’s appointment, Ansell said: “I think there’s [always] been that slightly distanced relationship, which I think carries through the fact that the department itself hasn’t always been deeply into what’s been going on in the sector.”

The lack of understanding of how the sector works has also been a critique levelled against the incumbent, Nathi Mthethwa.

Mthethwa, like many ministers appointed to various Cabinet positions, doesn’t come from the sector. Mthethwa was moved to the Arts and Culture Department under former president Jacob Zuma’s administration in 2014. Mthethwa’s “tenure has been one of the worst of any arts minister, and unfortunately, he’s been the longest-serving minister. Having been responsible for the police who committed the Marikana massacre, he should have never been reappointed to Cabinet, but that he was allocated to the arts portfolio shows how little government generally cares about the sector,” said Van Graan.

When Mthethwa’s appointment was announced in Cyril Ramaphosa’s new Cabinet in 2019, a petition was drawn up by prominent arts, culture and heritage practitioners pleading with Ramaphosa to replace Mthethwa with someone who was “credible” and “from civil society who is respected by the arts community”. Their petition fell on deaf ears and after years of watching a select few benefit from departmental arts grants and a lack of knowledge from those in the department, creatives are still calling for his removal.

The way the Department of Sport, Arts and Culture (DSAC) handles everything “is a mess” and it’s partly because they don’t understand the significance of the arts in this country, said Mokhutshoane.

Indeed, the DSAC appears messy. In 2019 whistleblowers claimed that millions from the Mzansi Golden Economy fund were allocated to artists without the necessary checks and balances. Among them was the Grammy-winning group Ladysmith Black Mambazo, which was allocated R36-million over three years by the department to teach traditional Zulu song and dance, and to make an album with Zuma.

When plans for the album were announced by the eThekwini municipality, the Dr Joseph Shabalala Foundation, which is linked to Ladysmith Black Mambazo, denied claims that they’d be making an album with the former statesman. The album was never released.

In the 2018/19 funding period, City Press reported that the department paid the National Empowerment Fund R20-million without the required committee approvals. At the time the department denied that it hadn’t followed the necessary procedures.

There’s also the R8-million that veteran playwright Welcome Msomi stole from the Living Legends Legacy Programme. Msomi, who was one of the signatories for the programme, was found guilty of theft in 2019, but died before he could be sentenced.

There are many stories of funding seemingly not going to the right hands, leaving talented creatives in even more precarious positions. The rise of entities ignoring good corporate governance during Zuma’s administration was also to blame, said Ansell.

In the wake of the NAC sit-in, which is in its second week, Mthethwa has said nothing and his spokesperson did not respond to emails and WhatsApp messages. Artists have called for him to be removed, making this the second time this year that artists have called for his dismissal. In January, Mthethwa tweeted that “theatre was alive and well”, which artists said demonstrated how out of touch he was. Mthethwa later apologised for the tweet.

Ansell isn’t convinced that axing Mthethwa will make a difference. In her blog, she writes: “The problems of the sector did not start with this minister. They are long-standing, political, systemic and societal. Demanding one individual’s head is a distraction. Getting him fired – if it ever happened – would just be one of those easy victories Amílcar Cabral warned us never to claim. It would allow government to signal responsiveness and bask in any ensuing kudos at minimal cost. But the only thing it’s likely to change is the portraits on DSAC office walls.” DM168