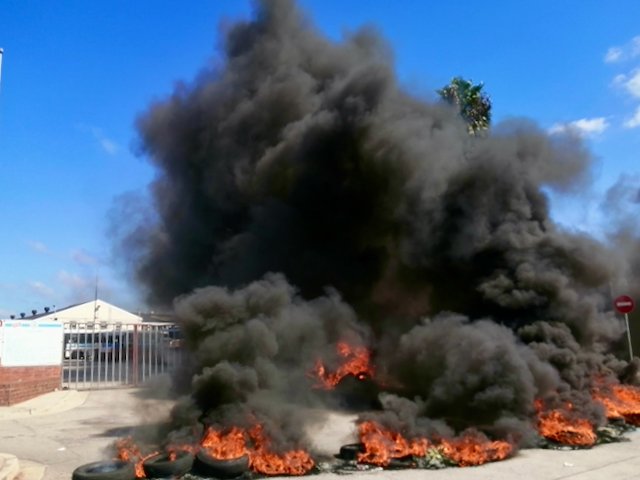 Taxi driver says they will torch any bus that operates in defiance of the strike.

Bus services are suspended in Nelson Mandela Bay. This comes after services were disrupted on Thursday morning, leaving thousands of workers stranded. About 600 angry bus drivers burnt dozens of tyres in front of the Algoa Bus Company main offices and depot in Pearl Road.

The bus drivers say they won’t go back to work until their demand to end short time is met. (Short time is when work hours are reduced, usually during a period of stress for a company.)

Xolani Gojela, Korsten committee member of Pedta, said, “We want to assure them that no bus will operate while they are striking for money that would benefit everyone. If we see a bus on the road during this strike we will torch it.”

The bus company says the issues are at the Bargaining Council and the strike is unprotected. It is now taking the matter to court.

Sicelo Duze, CEO of Algoa Bus, said Covid-19 has reduced demand for its services. “Many businesses have shut down and workers were retrenched. We are on short time because the funeral business has dwindled. Families use taxis to reduce overcrowding in graveyards in line with Covid-19 regulations. The undertakers also encourage the families to bury during the week.”

Mzoleli Ngaza, organiser of the bus drivers, said, “We are still working short time … From May to June we worked three days a week. Then in July it was moved to five days.”

“Per our employment contracts we should work 45 hours a month. But now we only work 38 hours. We used to work from Monday to Saturday. Only a few work now on Saturday; the rest are suffering.”

“We are really struggling … We used to work three Saturdays a month and we were not earning less than R700 a day,” he said.

Bus driver Nontyatyambo Makeleni said, “I used to take home a week about R3,700. But since this short time was introduced I take about R2,500.”

“I am battling to pay my son’s Fort Hare University’s fees. Also, I can’t assist my two relatives anymore.”

A commuter, Monwabisi Nkone, who works as a petrol attendant in Newton Park, Gqeberha, said, “I [also] work short time at work. I had bought bus coupons for R100 to last the whole month. But now I have to pay R32 for a taxi to Soweto-on-Sea.”

Mziyanda Twani, Numsa regional secretary, said he was still waiting for a report from the union representatives who held a meeting with the company. DM