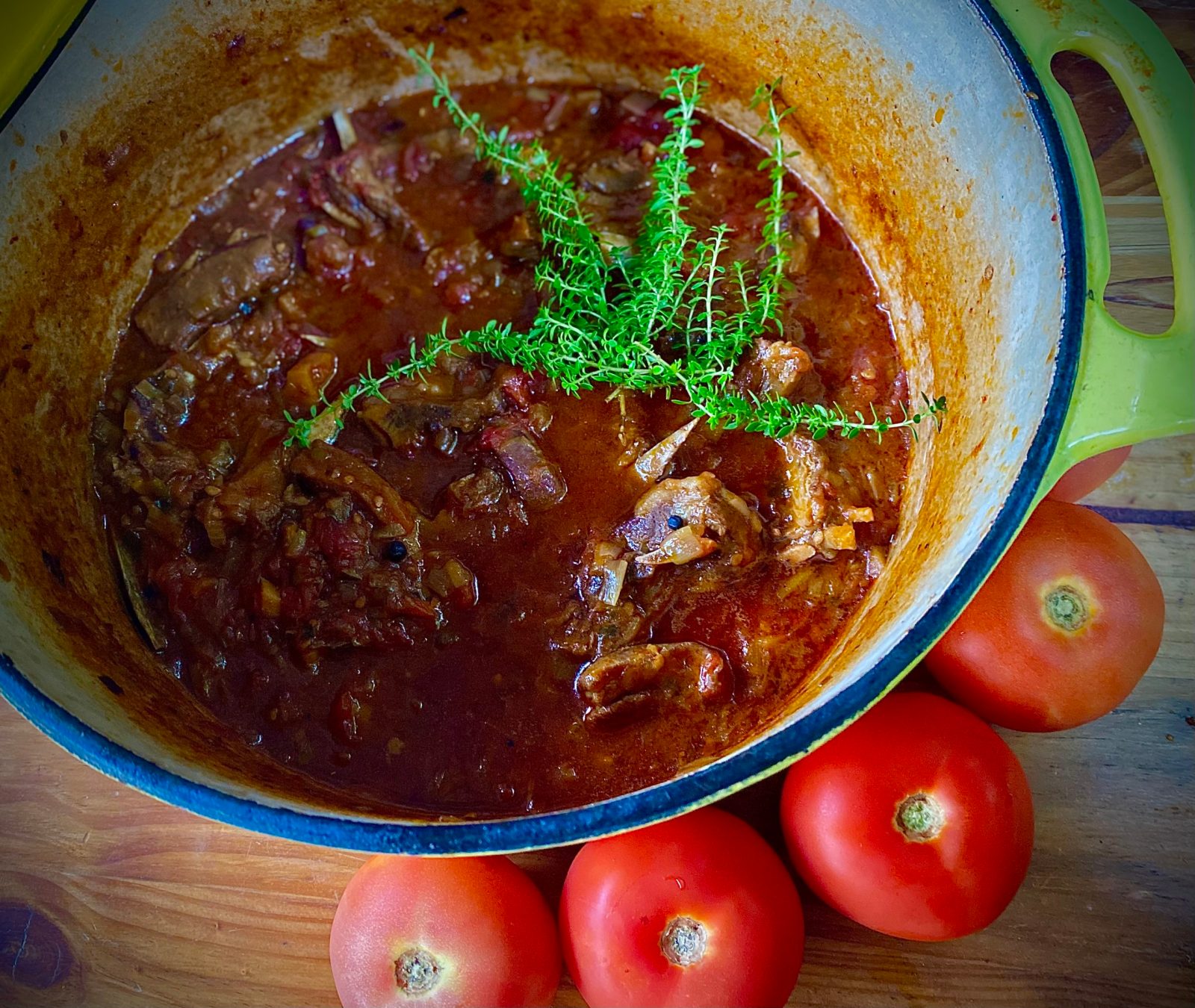 Tomato bredie is a worthy classic of South African cuisine and is not made nearly as often as it deserves to be. Given the full C Louis Leipoldt treatment, it is a fine dish that will charm the most discerning palate.

In the old Cape kitchens, tomato bredie was one of those dishes that every self-respecting cook had their recipe for, and all would swear by their version. A tomato bredie, in its essence, is a stew of fatty mutton and tomatoes simmered for hours. But there’s more to it than that, especially if approached in the way of C Louis Leipoldt. If your first 21st century thought is, well, we’ll ditch the fat for starters, rather find another recipe. Fatty mutton is as much what a tomato bredie is all about as the tomatoes themselves.

So, you want mutton rib. Mutton because it’s richer in flavour than lamb, and rib because it has both bones and layers of fat. But first let’s go back a century and more…

Before writing this recipe, I delved into Renata Coetzee’s classic The South African Culinary Tradition, but found her tomato bredie recipe rather plain. In search of something more robust, I found C Louis Leipoldt’s recipe for it in Leipoldt’s Food & Wine, to discover that his version is cheese to Coetzee’s chalk. This with respect to Coetzee, whose book is a favourite of mine; but it simply sets out a basic formula for your ubiquitous tomato bredie. Hers has mutton (fatty), onion, chilli, 12 tomatoes, a little sugar, salt and pepper, and of course water. That’s it.

But veer over to Leipoldt’s Food & Wine and the story is very different. Instead of Coetzee’s eight ingredients (if you include the salt and pepper and the water, so just five without them), Leipoldt lists 18. Then, being Leipoldt, he adds a final “glass of wine” which frankly he seemed to put into everything. So: Leipoldt 19, Coetzee 8. No contest. Not that the quality of every dish rests on its number of individual ingredients, but in this case I have no doubt Leipoldt’s is in a higher league altogether; having made something approximating it and have it turn out so delicious that I cannot believe I hadn’t made tomato bredie in years.

My recipe does not follow his recipe to the letter, but I did use it as a guide.

Salt to taste (be generous)

Plunge fresh ripe tomatoes into rapidly boiling water and remove them a minute or two later with a slotted spoon, to make it easy to slip the skins off. That done, quarter the tomatoes. Keep them aside.

Put all the mutton into a heavy pot and add the sliced onions and leeks. Sprinkle the flour over and stir over a moderate heat with a wooden spoon, to coat. Throw in a heaped tablespoon of butter (unless your meat has sufficient fat), give it a stir, and let it cook for 10 to 15 minutes, stirring often, to get the mutton’s own fats working to create some pleasing fattiness in the burgeoning stew. Don’t be shy of the fat. Eventually, the fat on top of the dish will be spooned off, but by then the fat will have given the stew a lovely luxurious depth of flavour. (Note: Leipoldt does not add butter but calls for sheep fat. If you use nicely fatty mutton ribs, this process will happen in the pot and you may not need extra fat. But help it along with a little butter, as I did, if you like.)

Now start adding most of the other ingredients, but not the tomatoes or the salt: add the ginger, cardamom seeds, coriander seeds, peppercorns and fennel seeds, as well as a few sprigs of thyme (Leipoldt calls for marjoram too, if you have some, though I can neither find it nor grow it in my Karoo town), garlic chives, and chillies. Braise everything in the pot, stirring now and then, for 10 to 15 minutes, then add all the tomatoes, stir, and cook covered on a very low heat for what Leipoldt calls “a few hours”. I’d make that about two.

Only salt the stew after all of the above simmering then, once salted, also add a tablespoonful of chutney, a tablespoon of brown sugar, and let it simmer for what Leipoldt calls “another couple of hours”. This time it is uncovered because you want the liquid to evaporate (to a point) and thicken, but don’t let it cook away so much that you no longer have a lovely moist, thick stew. The point of the slow cooking is to end up with meat that crawls off the bones of its own accord, and of course to intensify the flavours and thicken and enrich the sauce. DM/TGIFood