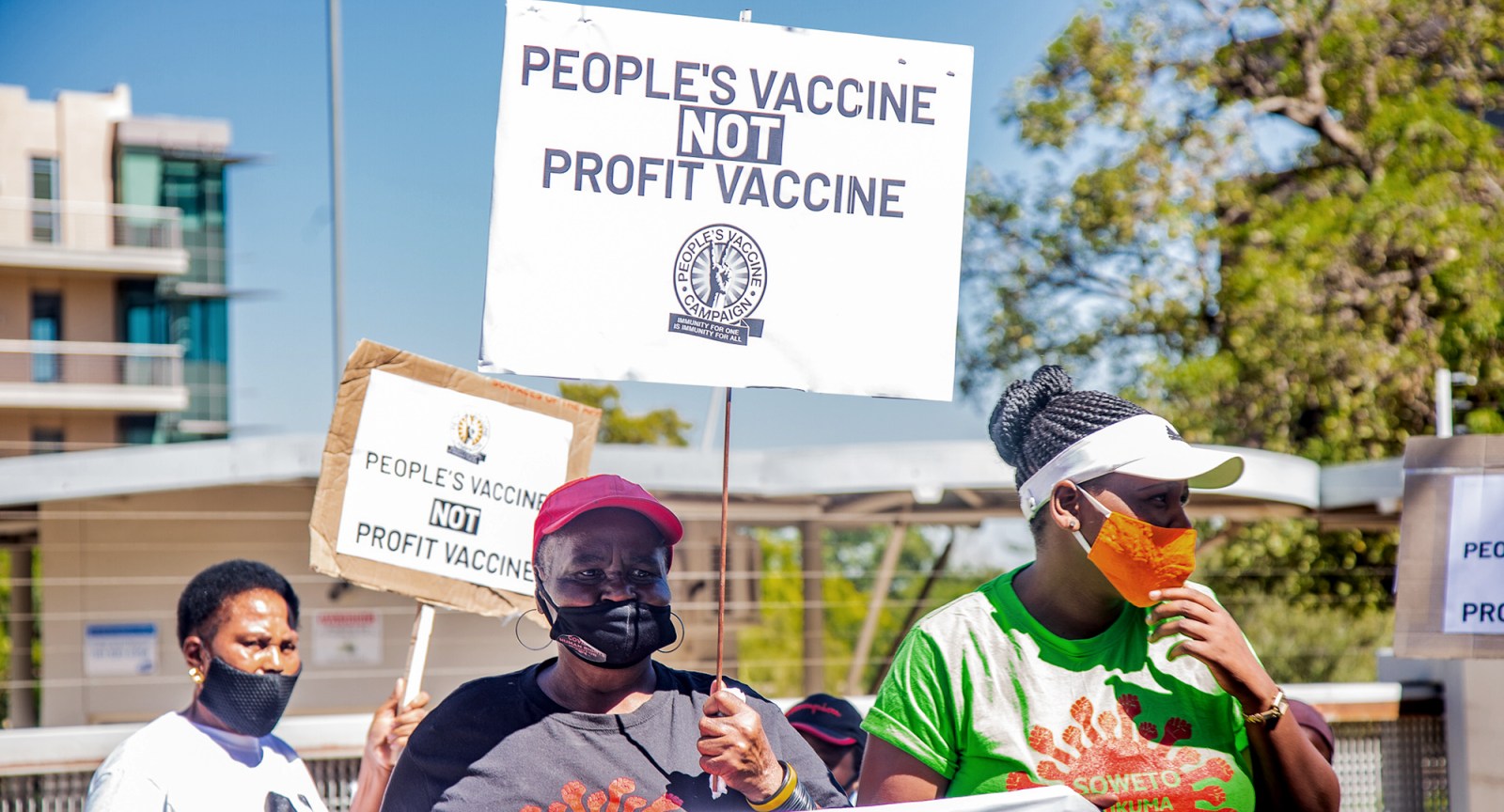 People protest in Sandton on the Global Day Of Action For A People’s Vaccine on 11 March 2021.(Photo: Gallo Images / OJ Koloti)

Experts agree that the local and global Covid-19 health response constitutes a human rights failure. This emerged during a webinar hosted by the Dullah Omar Institute at the University of the Western Cape on Tuesday.

It’s been more than a year since the first positive Covid-19 case was confirmed in South Africa and, looking back, experts agree that the pandemic exposed and exacerbated faultlines in public health and human rights in the country and globally.

Prof Francois Venter, divisional head of Ezintsha at Wits University, said vaccine access in South Africa was “appalling” and criticised the government for not initially having a vaccine procurement and distribution plan.

“Again, the people who suffer the most in this country are going to be the poorest, the ones with the least voice,” said Venter.

Phase one of the vaccine roll-out has been under way since mid-February and thus far nearly 160,000 healthcare workers have been inoculated.

The roll-out follows a number of setbacks. The government, lambasted for dragging its feet, procured the AstraZeneca vaccine which was later found to have limited efficacy against the 501Y.V2 coronavirus variant which is dominant in the country.

South Africa switched to the Johnson & Johnson jab as part of the Sisonke Ensemble study and the South African Health Products Regulatory Authority (Sahpra) recently approved the Covid-19 vaccine by Pfizer and BioNTech for use. South Africa has secured 20 million doses so far.

A vaccination calculator by The Media Hack indicates we’ll only reach the desired “herd immunity” by 2039. And while South Africa has vaccinated roughly 160,000 people in a month, Rwanda inoculated about 140,000 people in two days.

Dr Tlaleng Mofokeng said the World Trade Organisation’s decision to set aside the Trade-Related Intellectual Property Rights (Trips) waiver on equipment, drugs and vaccines related to the Covid-19 pandemic was a barrier to vaccine equity.

Tlaleng is the United Nations Special Rapporteur on the right of everyone to the enjoyment of the highest attainable standard of physical and mental health.

The waiver, first proposed by South Africa and India in October 2020, had support from 57 countries, but was opposed by the United States, the European Union, Canada and the United Kingdom.

Alicia Yamin, a lecturer at Harvard Law School and senior fellow at the Petrie-Flom Center for Health Law Policy, Biotechnology and Bioethics, said the global community has been fed three lies from this pandemic: that the virus would be the “great leveller” and philanthropists, as well as public-private partnerships and global health governance, would “save the day”.

She criticised philanthrocapitalists like the Bill and Melinda Gates Foundation that are “not accountable to anybody”.

“Bill Gates was very instrumental in having the world choose a route to vaccine distribution that relied on pharmaceutical monopolies as opposed to sharing technologies and know-how across borders,” she argued.

According to Yamin, the only mechanism that affects real change is civil society and mobilisation.

“We should have learnt from the HIV/Aids crisis that really what forces change are people who are unwilling to be discarded by colonialist structures of global governance that just treat them as expendable.”

The Aids crisis birthed movements such as the Treatment Action Campaign (TAC) which fought for universal access to antiretroviral medications in South Africa.

She urged the creation of equitable health systems and, referring to the #BlackLivesMatter movement in the United States, said more people of colour died in the country from discrimination, neglect and punitive health policies than from police violence.

Yamin also warned that dependence on foreign aid by lower-income countries reinforced the coloniality of power. She linked this to present debates on vaccine patents and monopolies held by big pharma.

“Intellectual property benefits a very tiny percentage of very wealthy people in the global north who are involved in the pharmaceutical industry,” she said.