Power failure: Dozens of Soweto homes in the dark for nine months 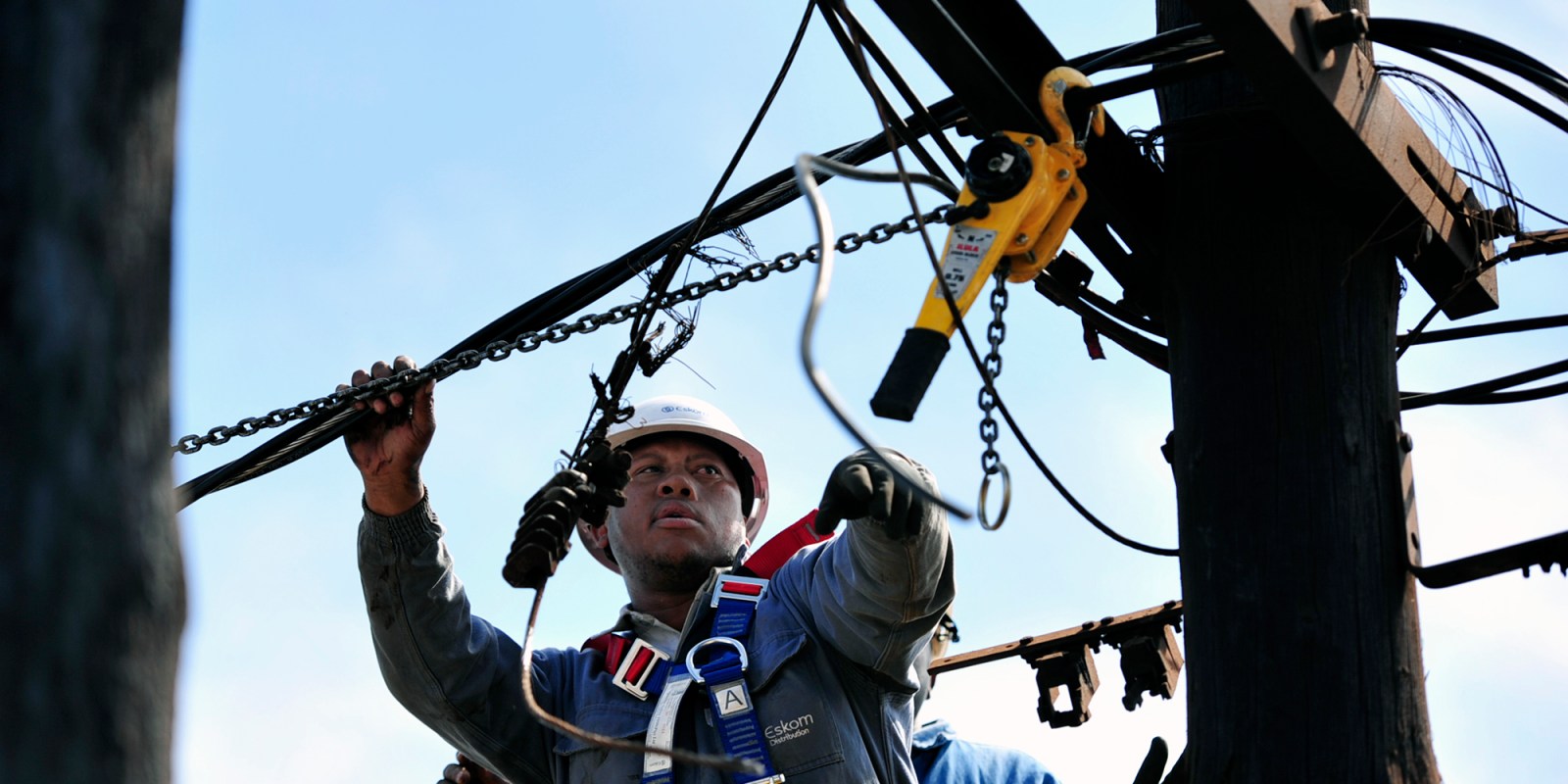 Fifty-two homes in Chiawelo, Soweto, have endured anguish and misery for nine months without electricity. Eskom says the lengthy power outage was caused by damage to infrastructure and illegal connections.

The last time lighting up a room was as easy as flipping a switch was on 17 June 2020. Since then, families of the Chiawelo, Soweto,  community have been without electricity.

“Life came to a standstill,” said 56-year-old Emmanuel Baloyi of the beginning of nine months without power. Four months later, in October 2020, Baloyi’s diabetic brother died. The disease had ravaged Baloyi’s brother to the point where he required amputation.

“We actually didn’t expect he would die when he did,” said a neighbour, 61-year-old Martha Ntsanwisa, who has lived in the area since 1963. “We were very concerned about his health over the winter period. He survived that, only to die in October.”

Baloyi said his brother’s diabetes medication required cold storage, but without electricity, it was taken as it was. The brother also needed to be kept warm, which proved impossible.

“I strongly believe that my brother would still be alive had we not experienced the long-term electricity cut,” said Baloyi.

The dead man left behind four children, three of whom are still at school. One is enrolled at a special needs school.

Eskom was at pains to describe how the electricity network collapse in the area came about.

“Illegal connections and unauthorised operations on Eskom’s networks result in instability and overloading on the network, leading to damage to transformers and other network equipment and pose a safety risk to the public and technicians operating on the network,” the power utility said through its media desk.

To replace the faulty transformers and mini-subs, a network audit must be conducted to identify the fundamental causes of the failure and to assess the extent of the damage to the network. During the audit process, illegal connections and meter bypasses will be removed and tamper fines issued to customers guilty of fiddling with the infrastructure.

A fined customer has to settle a remedial fee. Failure to settle the fine means one would immediately need to complete and submit a deferred payment arrangements (DPA) form. The DPA form allows customers to settle the fine within a period of six months. Once the form has been submitted, Eskom arranges for the required material and resources needed to start with the network repairs.

“For Chiawelo, unfortunately the community took too long to settle the tamper fines through the DPA process,” Eskom said.

“After settling the tamper fines, Eskom sent in a team to finally go and assess the network to start with the repair work. While busy with this exercise they were unfortunately pointed [at] with firearms by some members of the community.”

The power utility said its technicians were traumatised and felt it was unsafe to go back. They also found cables connected to other live transformers and to the failed one, with a lot of unsafe cabling.

“This is very dangerous because the network was no longer what we know it to be and would be very unsafe for our technicians to work on,” Eskom said.

The Baloyis have owned their home since 1965. It is one of 52 houses in the neighbourhood hit by the lengthy blackout. The households use wood, paraffin, gas and candles for lighting and cooking. Everyone battles to charge phones and laptops.

Community members said they had made several costly trips to Eskom headquarters at Megawatt Park, the last on Monday 1 March, but none had borne fruit.

“Lack of electricity renders fridges and all other electric appliances useless; for the past nine months. Useless,” said Ntsanwisa.

The problem extends beyond the 52 houses and beyond Chiawelo. Police confirmed that on the night of Monday 15 March, three cars were torched in Soweto during an overnight electricity protest. Nancefield Hostel dwellers rioted after they were cut off.

So widespread are electricity protests in Soweto that no one takes the daily action seriously anymore. Police show up and disperse the crowds with rubber bullets when they deem it necessary, but community members always return to dark homes.

People in Chiawelo told Daily Maverick their electricity struggle had created bad blood between some in the community as frustrations had led to a lack of trust.

Ntsanwisa’s daughter, 43-year-old Granny Ntsanwisa, said the situation affected her daughter’s school performance: “She cannot use her laptop and has very limited use of her phone.”

Neighbours who have power demand a fee of at least R20 for charging phones and laptops and at least R50 for using a washing machine.

“Sometimes, when they see you approaching, they close the gates and pull down the curtains as if there is nobody in the house. They have had enough. Our lives have become awfully miserable,” said 46-year-old Nancy Khoza.

Khoza’s 93-year-old mother is sickly and should keep warm at all times. “I’m considering sending her to my sister in Lawley. Winter is approaching; I’m very worried about her health,” said Khoza.

“Children have become accustomed to going to school hungry and sometimes without a proper bath because they are scared of cold water,” said community leader Nomsa Mbatsani, 62, who has sent her daughter and gravely ill husband to stay with relatives until the power returns.

Having no power forces people to wake up early to prepare for work and school, which they say makes them targets for criminals who operate under the cover of darkness.

Ntsanwisa said her family’s monthly spend included candles and a 10kg gas bottle, which cost R230 to fill and lasted only two weeks. Spending on food and other expenses had more than doubled.

It’s the same with Mbatsani and the Baloyis. Mbatsani’s monthly spend includes a 6kg gas bottle costing R156 which lasts less than two weeks. “My monthly expenses have more than doubled. We are living from hand to mouth.”

Having no power forces people to wake up early to prepare for work and school, which they say makes them targets for criminals who operate under the cover of darkness.

Families told Daily Maverick they found it hard to adhere to Covid-19 regulations as they often needed to go out to find food. “It’s a risk we were prepared to take, otherwise we would have died of hunger and cold,” added Khoza.

As many of the 52 affected homes have tenants, some families also suffered a loss of income when tenants left due to the lack of power.

The area’s councillor could not be reached, but the community members said the councillor had failed them.

“You ask a neighbour to keep your meat in their fridge, but they use some of it. And just because you don’t want them to kick you out you can’t even complain. Those of us who still keep our food in other people’s fridges have accepted that we have to share it,” added Khoza.

On the one hand, the families blamed Eskom for the lengthy power cut and said they paid for their electricity and did not deserve what they viewed as punishment by the power utility.

Eskom, on the other hand, said engagements with the community had been concluded and delays were due to the restoration process it had outlined.

Meanwhile, Eskom continues with load shedding and load reduction. The latest bout announced is from Wednesday 17 March to Saturday, as power stations are still under strain.

Eskom said help was on the way for the struggling families, but the turnaround time would depend on the extent of the damage: “Despite all this, the one transformer is scheduled for installation no later than the end of this month, with the other to follow as soon as we are able to source it. Repair work also depends on the availability of material against the extent of the need for the same in all other affected areas in Gauteng.” DM