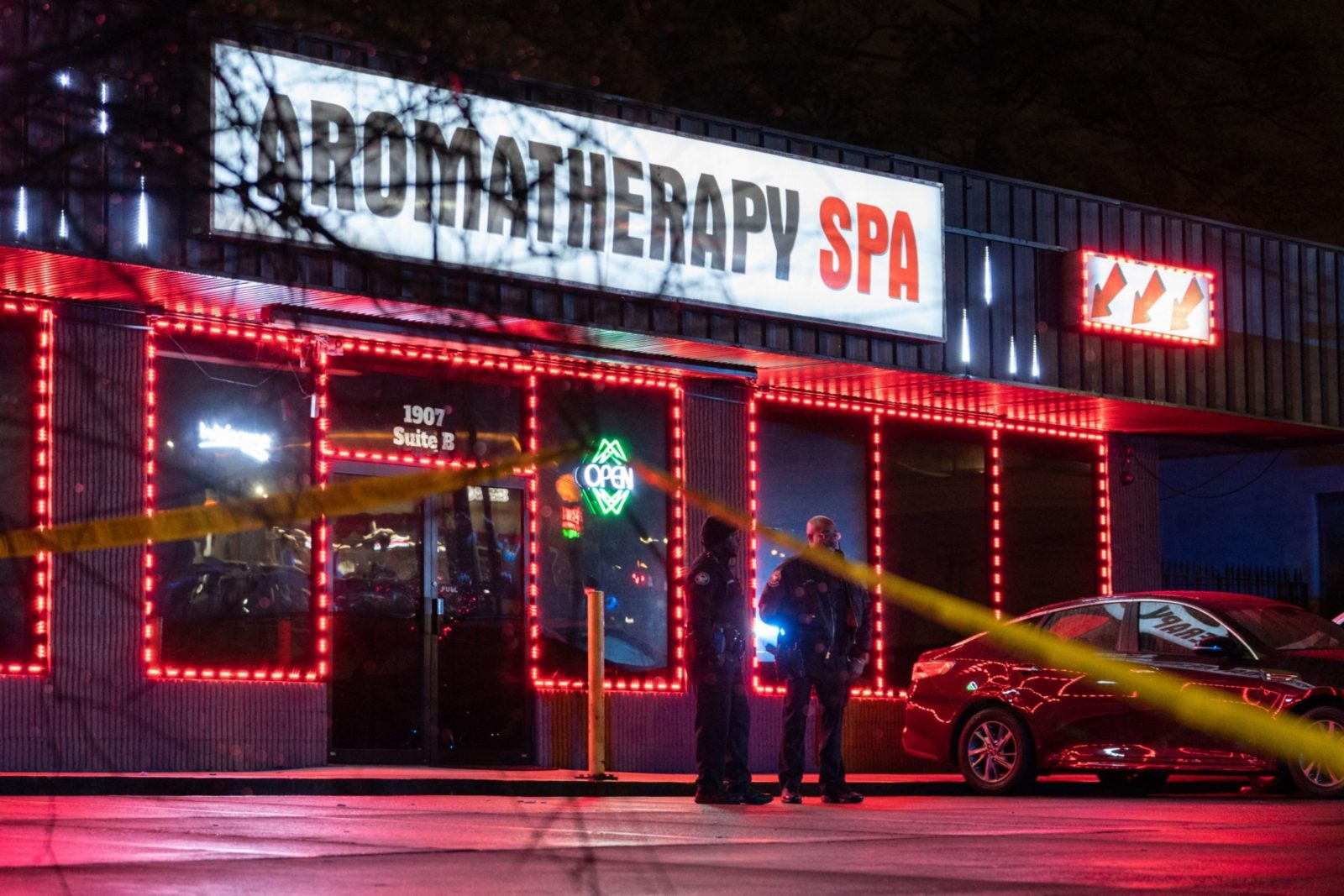 Law enforcement officers outside one of the massage parlours where eight people were killed on March 16, 2021 in Atlanta, Georgia. Photo: Elijah Nouvelage/AFP/Getty Images

The man accused of gunning down eight people, six of them Asian, at three spas in the state of Georgia on Tuesday is expected before a judge on Thursday. Police say Robert Long admitted to the shootings but insisted race was not an issue.

Late on Wednesday, authorities announced that the 21-year-old suspect arrested for the killings in the Atlanta area on Tuesday, 16 March said he was trying to “eliminate temptation”. Six of the victims were Asian women.

One man was injured after being hit while apparently walking out of a store next to one of the Spas.

Robert Long was arrested about three hours after the shootings on Tuesday night, following a car chase. He apparently targeted businesses he had previously visited. Authorities used surveillance cameras to link the shootings and identify the gunman. A tip-off about the car the shooter was driving helped police to apprehend him.

Atlanta police did not comment on the suspect’s motives after making the arrest. On Wednesday morning, Atlanta Police Chief Rodney Bryant said it was too early to say whether it was a hate crime: “We are still early in this investigation so we cannot make that determination at this moment… even though we’ve made an arrest, there’s still more work to be done.”

Bryant was followed by Sheriff Frank Reynolds of Cherokee County who said Long had “made indicators that he has some issues, potentially sexual addiction, and may have frequented some of these places in the past, but as the chief indicated it is still early on, we still have things to process”.

When asked whether the shooting was racially motivated, Reynolds said “that did not appear to be the motive”.

Regarding the nature of the businesses where the shootings took place, and owing to the Cherokee County police saying the shooter saw them as places connected to sex, Atlanta Mayor Keisha Lance Bottoms said: “We are not about to get into victim blaming, victim shaming here… We don’t know additional information about what his motives were, but we certainly will not begin to blame victims, and as far as we know in Atlanta, these are legally operating businesses that have not been on our radar – not on the radar of APD [Atlanta Police Department].”

At the same media briefing, Captain Jay Baker – also of Cherokee County – said two of the victims were white and that the suspect admitted to the shootings and claimed race was not an issue.

“The suspect did take responsibility for the shootings… he does claim that it was not racially motivated… he claims that he apparently has an issue, what he considers a sex addiction, and sees these locations as something that allows him… its a temptation for him that he wanted to eliminate… those were comments that he made.”

Baker also said the suspect “was pretty much fed up and at the end of his rope and yesterday was a really bad day for him and this is what he did”.

Attacks on Asian Americans – mostly women and older people – have been on the rise in the US over the past year, and Bottoms said that in view of this “we are coordinating in real time to make sure that our communities have the support they need”.

They had not seen an uptick in formal complaints but were hearing about incidents on social media, and are “ready to provide resources to the extent that we can to make sure our communities are protected… many of our communities are sometimes hesitant to bring in law enforcement… there’s nothing too big or too small, we want to be aware of it all to make sure that we can supply resources and respond accordingly.”

Asian women over 5o – some in their 70s and older – are reportedly being attacked, often from behind.

Activist groups have noted that Asian Americans are often seen as foreigners and invisible. Recently – conspicuously during the Covid-19 pandemic – Asian Americans have been attacked and harassed. Physical violence has mostly been directed at the elderly and women. This has been blamed on racism and former president Donald Trump calling the coronavirus the “China virus”.

While about 70% of reported cases involved verbal harassment, about 9% involved physical assault while people reported being purposely coughed at and spat on in 6% of cases.

The White House called the killings tragic. Vice-President Kamala Harris said the shootings speak to the larger issue of violence in America:

“I do want to say to our Asian American community that we stand with you and understand how this has frightened and shocked and outraged all people… but knowing the increasing level of hate crime against our Asian American brothers and sisters, we also want to speak out in solidarity with them and acknowledge that none of us should ever be silent against any form of hate,” she said.

President Joe Biden said: “As you know I’ve been speaking about the brutality against Asian Americans for the last couple of months and I think it’s very, very troubling, but I am making no connection at this moment for the motivation of the killer… I am waiting for an answer, as the investigation proceeds, from the FBI.” DM