‘This is a story written in love about one of the many faces of love’: The adventures of Chuckle Bear and Vincent (Part One) 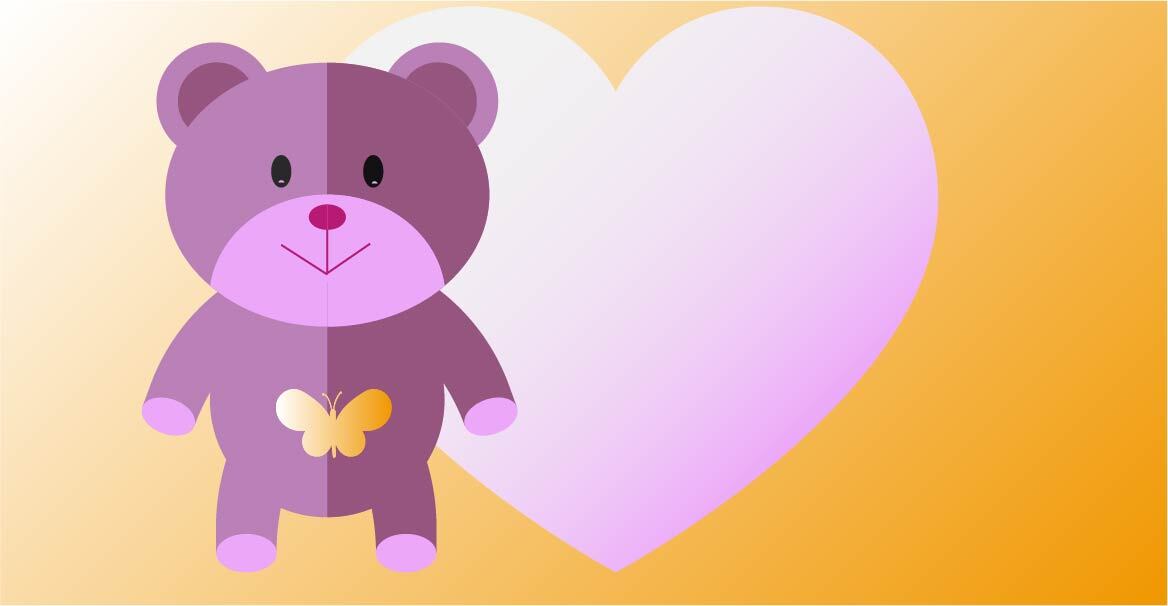 When her grandson was diagnosed with a rare form of cancer, Denise Murray decided to write bedside stories to help him cope with the illness. Here, she shares the two first short tales.

When each of my six grandchildren was born, I would create a box, filled with objects from when they were born: a letter to the child, newspaper of the day, magazines of the time,  mementos of their birth,  christening and first birthday with photographs, as well as other items of real and sentimental value.  This ‘time capsule’ was closed after the first birthday – only to be opened on their 21st birthday.

I filled such a box for my first grandson, Vincent.

When Vincent was seven years old, he was diagnosed with a rare form of childhood cancer, with only two cases in South Africa having been previously diagnosed. He and his family moved up to Johannesburg from KwaZulu-Natal so he could receive specialized chemotherapy to fight the cancer.

Vincent had a favourite soft toy which he loved, a purple bear named Chuckle. Vincent and Chuckle were virtually inseparable so, of course, Chuckle moved with them.

I was living in Cape Town at the time and as I couldn’t go up to see Vincent often, instead, I wrote several stories about Chuckle for his amusement. There were eight stories in total, which I emailed to his parents, and they would read them to him. The stories follow Chuckle and Vincent on their adventures.

In the eighth and final story, Chuckle learns about the Rainbow Bridge, the place where one goes when “our bodies can’t any more give a good and proper home to our spirit, [and] it will leave our body behind and cross the Rainbow Bridge to a world on the other side where only spirits live.”

Vincent never read or listened to the last Chuckle Bear story. He and Chuckle crossed the Rainbow Bridge on Thursday 1 October 2009.

Vincent would have turned 21 this April.  His box is still in my house.

How Chuckle Bear Came to Africa

Chuckle Bear was born into a large family of soft and cuddly bears in the country called New Zealand.  He had many brothers and sisters, and cousins, and they roamed far and wide as young bears, playing tricks on people (but never nasty tricks) and having little adventures as they grew up.

New Zealand is a country of beautiful lakes and high snow-capped mountains. And the young bears would often go to these places to play.  They crossed rivers by walking across fallen logs; they jumped into deep waterfall pools; they camped in the forests; they skated on glaciers; and being young and strong, they would often just live on the berries and roots that they found along the way.

On many occasions, they joined the fierce Maori tribes in their marches across the country, paddling the waterways in canoes, and trekking miles on end to find new camps in summer, and sheltered ones in winter.

All the wild animals they met loved the bears. If they were in trouble, they might be helped by a sprightly squirrel or a friendly hedgehog. If ever they lost their way, they would be guided by birds flying high enough to see the pathways from above. But somehow, these adventures never seemed to be enough. The young bears, especially Chuckle, longed for more exciting experiences.

And so it happened that – quite by accident – Chuckle, and three of his cousins (Tender, Sparkle and Snuggle) came to Africa.

By chance, they bumped into a traveller in New Zealand.  His name was Bushy, and he had come to work there for only a few days. Seeing the label “Africa” on the traveller’s suitcase, Chuckle seized the chance to travel.  Yellow cousin, Sparkle, was a bit hesitant. “What if they don’t have the roots and berries we like in Africa”, he said. Pink Tender Bear was willing to take a chance. She had a brave heart. Blue Snuggle Bear didn’t mind if he stayed or went – so long as he could snuggle and sleep wherever he ended up. And so – led by Purple Chuckle, the four cousins jumped into Bushy’s suitcase, squeezing in right at the bottom where they wouldn’t be seen or disturbed.

And so they flew across the oceans and landed in Africa.

It so happened that Bushy and his wife, Babu, had four grandchildren.  The very same number as the travelling bears. It also happened that all this took place towards the end of the year when Bushy and Babu’s whole family would gather at a place called Kenton-on-Sea for Christmas and a summer holiday.  The big surprise for the grandchildren when they arrived was that a bear would be waiting on each of their beds to greet them.

Cousin Leith was the youngest – so Snuggle blue bear went to him. Cousin Farris was the only girl – so no question, pink Tender Bear would be hers.  Cheerful Crawford was paired with yellow Sparkle Bear. And the bear with the bravest heart and the big sense of fun and humour, purple Chuckle Bear, lay waiting for Vincent who was Bushy and Babu’s firstborn grandson, who also had a very brave heart and a big sense of fun and humour. They made a fine pair. They knew and understood one another without even speaking, and were firm friends from that moment on.

Never have four bears, nor four children been happier. And this is the introduction of how Chuckle Bear came to Africa, to begin his adventures with his friend, Vincent.

How Chuckle Bear Learnt to Be Patient

When Chuckle Bear went home with Vincent that first Christmas, he was used to being with Vincent night and day, and also having the company of his cousin bears and their new friends.

So it was a bit of a shock when the new year began, and Vincent would go off for hours on end to a place called “school” where he would be busy for most of the day, whilst Chuckle was left at home feeling lonely and bored.  Not even being with other toys helped – he only wanted Vincent.

First, Chuckle sulked. But nobody seemed to notice. Then he cried a bit.  But again, nobody seemed to take his tears seriously. After that he tried a tantrum – again, it didn’t help. No amount of kicking, banging of fists and bear silent screaming made any difference. Even the dogs just opened one eye to see his performance, then went back to sleep, leaving Chuckle to his tantrum, until he became too tired to continue.

Then slowly Chuckle began to realise something. If, after Vincent said goodbye to him in the mornings, he just lay quietly and patiently, the hours would pass much more quickly, and soon Vincent would be home again.  And because he’d been patient and restful, Chuckle would then have plenty of energy to play with Vincent through the afternoon and evening until bedtime when the two of them would snuggle under the duvet and drift off into sweet dreams together.

What Chuckle learnt is that sometimes things are not exactly as we want them to be. Sometimes we will be uncomfortable, even sick and hurting, but all these nasty things will pass more quickly if we are patient and restful.  And the reward is that we will be stronger and have more energy for fun afterwards.

The next time the bear cousins met, Chuckle couldn’t wait to tell them what he’d learnt about the value of patience. And as he told his story, his cousin bears nodded, because they had also struggled to have patience.  Now they knew how to go forward – if brave-hearted Chuckle could learn patience, so could they.

And today,  Tender, Sparkle and Snuggle – led by Chuckle – are the most patient bears in Africa. And they are also the most loved. DM/ ML