(Bloomberg) -- A Japanese court has ruled that the lack of legal recognition for same-sex marriage violates the constitution -- the country’s first such judgment in support of marriage equality.

The Sapporo District Court on the northern island of Hokkaido handed down the decision Wednesday, in the first of a series of similar damages suits filed by same-sex couples in five courts nationwide. The result could eventually prod the government to stop dragging its feet on a change that polls show is increasingly accepted by the public.

“This is a landmark ruling and I hope it will be an opportunity to build awareness that marriage is a right that should be afforded to all people equally,” said Masa Yanagisawa, head of Prime Services Japan at Goldman Sachs, who is also on the board of campaign group Marriage For All.

The three couples party to Wednesday’s case said their rights had been breached because equality and freedom of marriage are enshrined in the constitution. The conservative government of Prime Minister Yoshihide Suga indicated its displeasure with the ruling.

“The government does not see the law on marriage as unconstitutional,” Chief Cabinet Secretary Katsunobu Kato told reporters, when asked about the court case. “On this point, the government’s arguments were not accepted.”

The Sapporo court rejected the plaintiffs’ demand for damages from the government for failing to change the law. However, it said in its ruling that same-sex couples’ lack of access to some of the rights afforded by marriage amounted to discrimination, which is banned under Article 14 of the constitution, according to a copy of the document posted by social litigation website Call4.

While the government cannot appeal the decision because it technically won, Kato added that he planned to monitor the cases being examined in other courts.

Business groups have cautioned that the country’s policies on marriage equality are hurting their hunt for top global talent. Like elsewhere, Japanese gay rights advocates have found allies among multinational corporations, who see it as a competitive issue for the world’s third-largest economy.

The ruling is likely to nudge other judges in the series of suits in the same direction, according to Makiko Terahara, one of the lawyers for plaintiffs in a similar case in Tokyo.

“It will be hard to argue that it’s fine to treat same-sex couples differently from heterosexual couples,” she said. “This puts pressure on the other judges.” But the Sapporo plaintiffs will also appeal and the case is likely to end up in the Supreme Court, she added.

Terahara said it was significant that the court had said marriage was not only for the purpose of having children, but a couple’s life together should also be protected in itself.

While a number of local authorities have begun to recognize same-sex partnerships, Japan has made little progress toward equal marriage in comparison with Western countries. That can leave couples without basic rights, such as the ability to visit a partner in hospital.

In Asia, only Taiwan has so far recognized same-sex marriage, though Thailand could make the change as soon as this year. 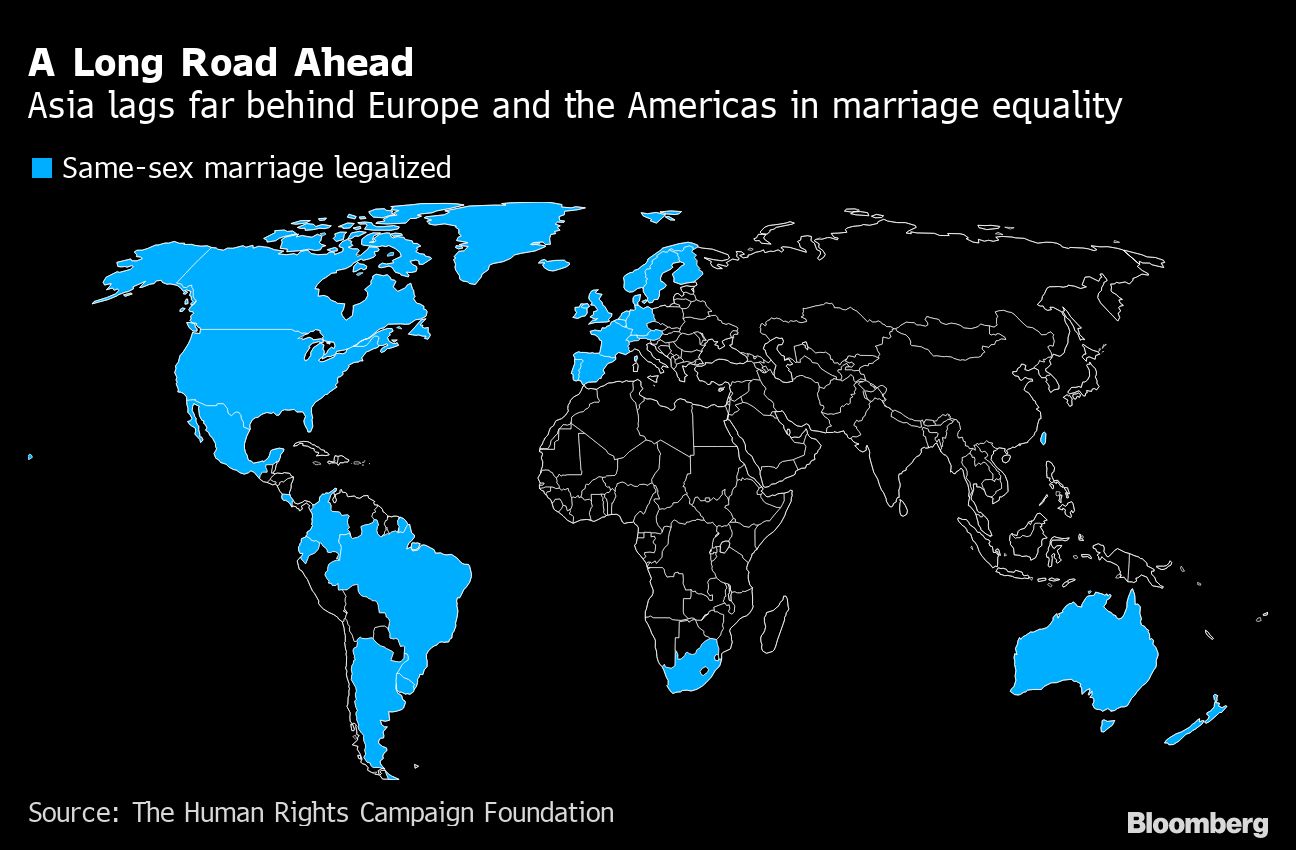 Suga told parliament last month that the constitution, unchanged since 1947, did not envisage the recognition of marriage between two people of the same sex. The issue “concerns the foundations of the family in this country and needs to be considered with extreme caution,” he said.

A more modest bill on promoting understanding of LGBTQ people drawn up by a ruling Liberal Democratic Party lawmaker has yet to make progress toward becoming law.

–With assistance from Takashi Hirokawa.