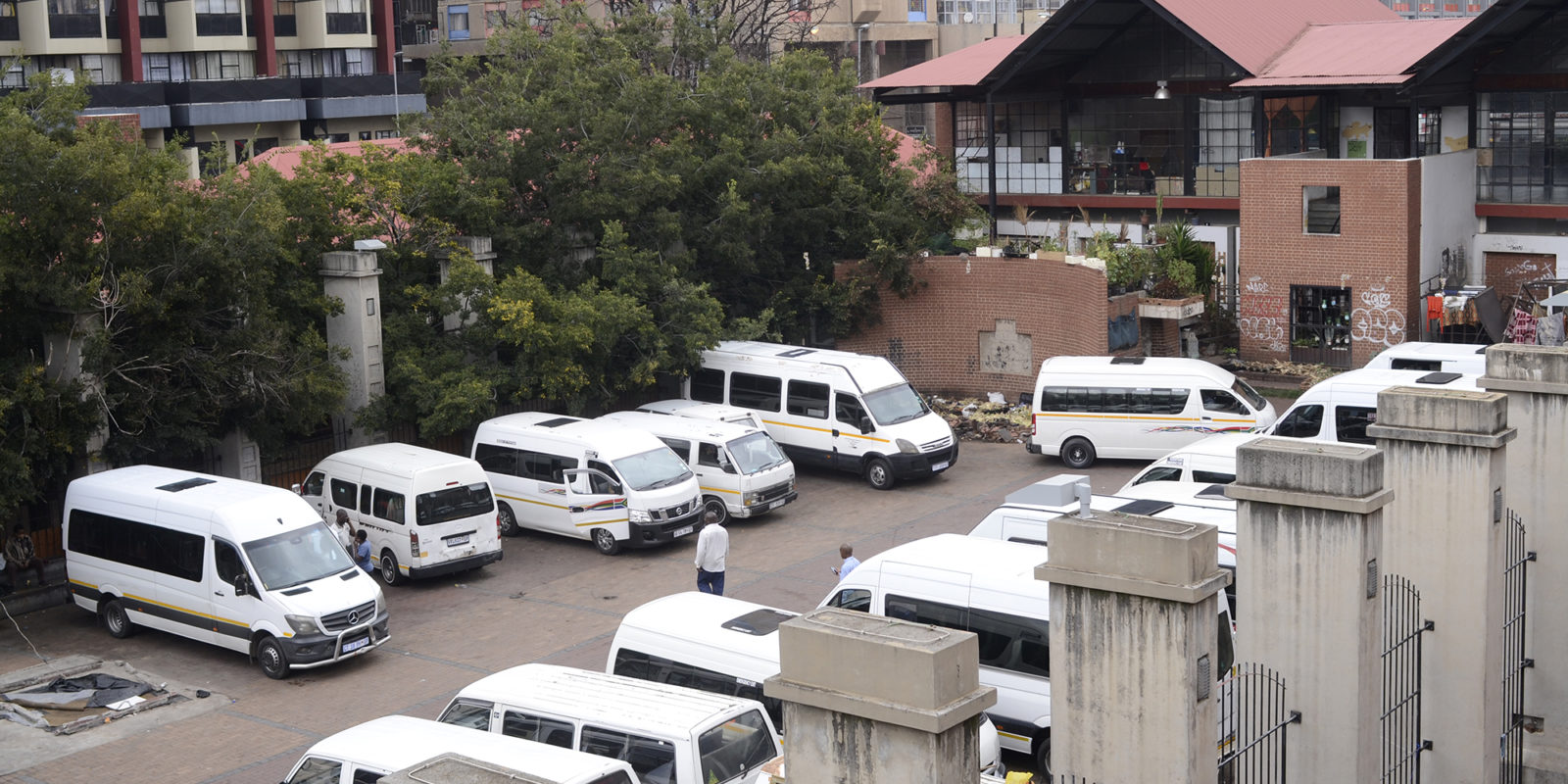 Over the past two years, taxi operators have taken over the Drill Hall, a cultural heritage site in the heart of Johannesburg's CBD. (Photo: Supplied)

The Johannesburg metro police department says a team of profiteers, probably taxi bosses in partnership with others living on the Drill Hall premises, have been charging people for overnight parking and renting out derelict taxis as accommodation.

When minibus taxis gradually occupied Drill Hall — the central square of a Johannesburg CBD cultural heritage site —  almost 20 years of negotiations between Joburg Property Company (JPC) and the department of public works and infrastructure (DPWI) came to a head.

“I’m not sure how long the negotiations have gone on with the department of public works (national/provincial) to have the property transferred to the city, but it seems to be from the early 2000s,” JPC said.

Public Works Minister Patricia de Lille issued a statement last week confirming that the transfer of the property would be effected.   “DPWI is currently in the process of transferring Drill Hall to the COJ as the city was previously given permission to manage the property.

“The matter has unfortunately been delayed in administrative processes but I will ensure that the matter is finalised by Friday, 12 March,” the statement said.

A symbol of military conquest, the Drill Hall was built in 1904 and used for drills and parades. It was also the site from which soldiers were deployed to World War 1 World War 2 and the 1922 rebellion, the 1914 strike and, during the apartheid era, where South African conscripts congregated to be dispatched to the “border wars”.

Most famously, the building is associated with the opening session of the Treason Trial (1956 to 1961), involving 156 anti-apartheid activists.

At present the site is inhabited by a fragmented community of artists, musicians, actors, sex workers, nyaope addicts, thieves, car-washers, and homeless migrants looking for jobs in the City. A child welfare organisation and a family-owned bakery that upskills sex workers are also situated on the premises.

The building is in poor condition, with people sleeping in every available space, including the library, art gallery, passages and stairways.

Its location opposite the notorious Noord taxi rank makes it a prime spot for off-street parking for taxis and, over a period of time, beginning in 2018, taxis have almost entirely occupied the central courtyard. Taxis affiliated to the Alexandra Taxi Association (ATA) are the main culprits, according to metro police.

Since 2018, the taxis have been encroaching on the property, allegedly becoming progressively more aggressive and territorial.

An artist on the site, who asked not to be named, said: “We have caught them a number of times — taxi owners, not drivers — right here inside the building, surveying the place. You could see that they were weighing up what they can do here.

“You could see that they intended to show that this is the space they are taking. So what they did then was, a horde of about 20 or 30 came here in around November last year, and lifted all the skateboarding ramps from outside and chucked them into a corner to make space for the taxis.”

Responding to complaints by city officials, the JMPD inspected the premises on 24 February and gave taxi operators until the end of the month to remove their vehicles.

According to the JMPD, a team of profiteers, most probably taxi bosses in partnership with others living on the property, were taking money for overnight parking and renting out derelict taxis as accommodation.

An unnamed informant from within the taxi industry said: “The ATA has very strong links to the current political leadership in Gauteng, so they tend to need to be protected. They are normally referred to as the Alex mafia.”

But ATA public relations officer Mxolisi Ximba said the association is not involved. “I think the arrangement was maybe made between individual owners and a person who stays there — we don’t know who,” he said.

“If the arrangement was made by the ATA, all the protocols would have been followed. There was no arrangement and we are not responsible.”

An artist on the site said: “These taxis have an echo system: there are the taxi drivers, the guys who wash and clean the taxis, then they bring food and alcohol. They leave their rattle traps here and people are being charged to sleep in them.”

Illegal electricity connections are rigged up to the lights on top of pillars erected to commemorate struggle heroes in the Treason Trial.

The rise and fall of the Drill Hall over the past two decades is linked to the actions/inaction of politicians, managers and administrators at all levels of government.

With the attainment of democracy, the military moved out in 1999 and people were allowed to squat in the building.

Architect Michael Hart, who was involved in the reconstruction in 2003-2004, said: “When I initially walked onto the site and came face to face with the 1,500 people sleeping in the hall, it was a huge shock.”

It was only after several homeless people died in fires in the main building in 2002 that it was made public that the Drill Hall had become a den of crime and poverty, he said.

The site was reconstructed at a cost of R10-million by the Johannesburg Development Agency (JDA). Hart was involved in the project. “What we brainstormed with the city was that we needed to take it from an insular military stronghold to an open, public, social-cultural place within the city,” he said. “The principle was that it needed to be a public space.”

Artists’ collective, the Joubert Park Project (JPP), was invited to be one of the anchor tenants at the site after the redevelopment in 2002-2003.

According to one of the members of the collective, Joseph Gaylard, “The original idea was that it would be a mixed-use heritage space, but there was appalling lack of basic management from the city and from the JPC during the entire time we were there,” Gaylard said.

“So we had this bizarre situation where the JDA brought in tenants to animate programming and meaningful activity at the site, and the JPC was then tasked with the basic property management function, which they were unable to give effect to in any way.”

The JPP signed a lease with the JPC, which later turned out to be invalid, given that transfer from public works to the city had not taken place.

The organisations at the site were constantly fending off City Power which wanted to turn off the lights. Eventually, the JPP was forced to open an account for the entire site since it was the only organisation with a lease with the JPC.

“It was actually crazy on our part to agree to open an account in these circumstances,” Gaylard said.

The JPP left in 2008. “I can’t tell you how many mind-bending meetings we sat through where these most elementary expectations were just never resolved, like having a proper lease, having proper sub-metering and billing of utilities — and without those things, a property such as the Drill Hall can’t actually work.”

The Keleketla! Media Arts Project, which took over the JPP, tried to foster a spirit of inquiry in young people from the inner city, encouraging them to learn about history through choral music, drama and storytelling.  Unable to formalise arrangements, Keleketla! moved out in 2015.

Keleketla! co-founder Malose  Malahlela said: “Since our self-imposed exile from the Drill Hall site in 2015, Keleketla! has focused most of its energy on trying to secure a lease.

“We’re dealing with 10 years of administrative failure and bureaucracy since the site was renovated in 2004. The minister knows this because we have tabled the issue on her desk countless times.

“Keleketla! met with CoJ representatives at the Drill Hall site on Tuesday this week so they could see the destruction of the relic first hand.”

Several years after Kelektla! vacated the site, there was a window of opportunity when a proposal was put to the mayoral committee during the DA-led administration in 2019, recommending that the Drill Hall be allocated to the JMPD to establish a station.

It was hoped that a police presence on the site would put a lid on escalating crime and preserve the building from further destruction.

The proposal was turned down by the then MMC for public safety, Michael Sun, although the JMPD was in support of the idea.

Following the recent intervention by the JMPD, military personnel have been visiting the Drill Hall, taking photographs and speaking to occupants.

On 3 March, JMPD spokesperson Wayne Minnaar said: “JMPD discovered that people and taxi drivers were paying rent to someone who had hijacked the building. It has been confirmed that SANDF will occupy the building from next week.”

The threatened military occupation has not yet taken place, with SANDF spokesperson, Siphiwe Dlamini responding to queries that the matter had been investigated and he could “safely say” the SANDF had not been involved in any way.

But speaking anonymously, one of the soldiers on site referred Daily Maverick to  Oupa Tolo, who advises the mayor on issues of safety and security. Tolo said he was aware that metro police and military personnel had been inspecting the site on behalf of the City, but he was unable to speak on behalf of the SANDF.

In the protracted process of researching this story, some displaced people living in the underground shooting range have vacated the space, and although the number of taxis has diminished, they are still there.

And the artists have hung in against all odds. The taxi takeover is the last straw, one of the artists said. DM