Two golfers, two car crashes, Cayeux is back; will Tiger make it too? 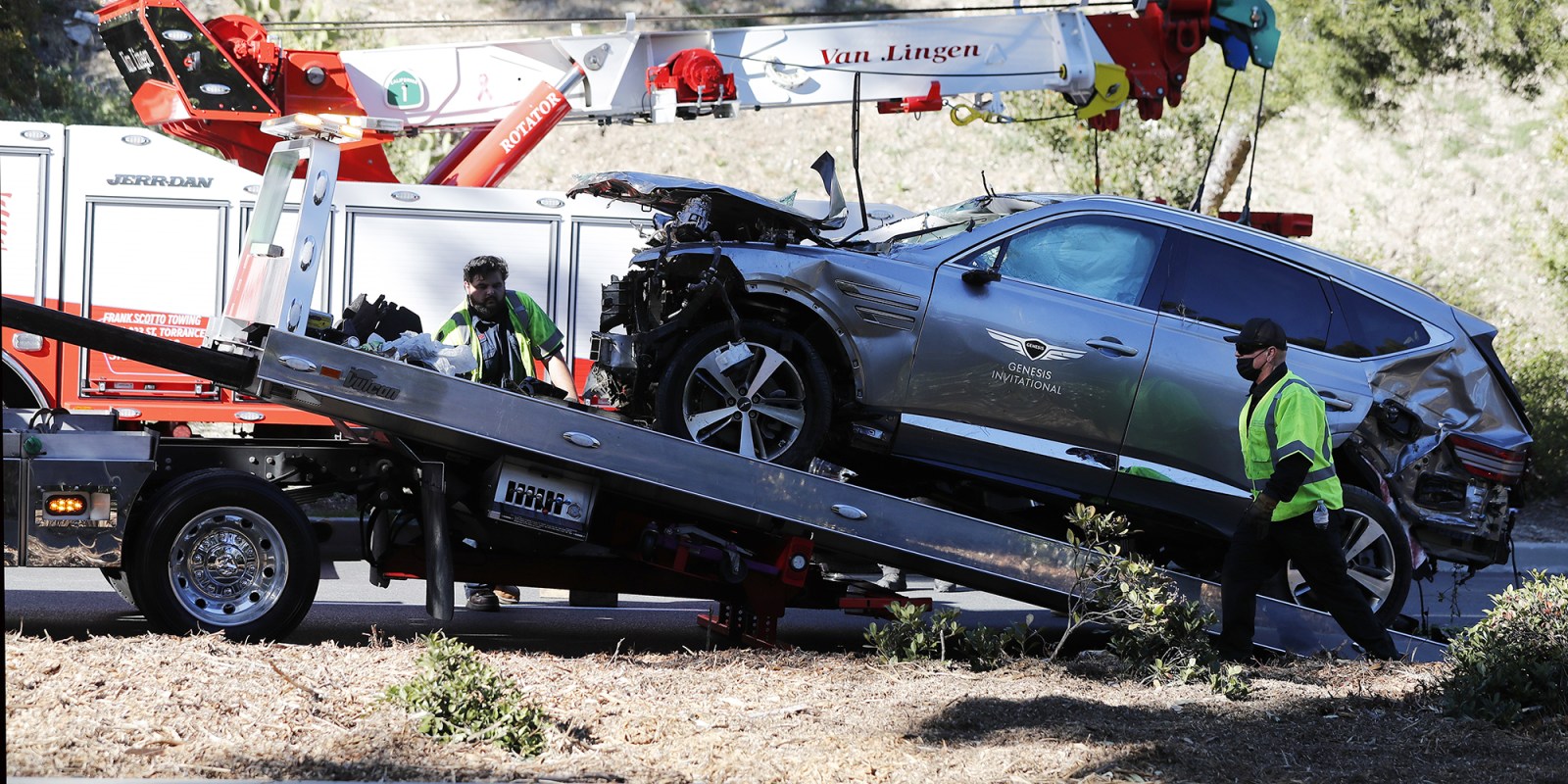 The SUV driven by US golfer Tiger Woods is loaded on to a flatbed truck after it was removed from a hillside at the scene of a single-vehicle crash in Rancho Palos Verdes, California, US, on 23 February 2021. (Photo: EPA-EFE / ETIENNE LAURENT)

In 2005, the then world number one Tiger Woods and Zimbabwean professional Marc Cayeux were paired together in the WGC-NEC Invitational in Akron, Ohio. In the first round, the pair of them bonded over the one thing they still have in common all these years later – pain.

Cayeux had his left hand heavily bandaged after burning it while braaing the week before. He wasn’t sure he would be able to play that first round with Woods, and then he wasn’t sure he’d be able to finish it when his hand started bleeding midway through the round. He did, signing for a 71. Woods was in awe of the sheer guts of his playing partner.

“Incredible, absolutely incredible,” Woods said after the round. “The fact he even went out there and played and grinded it out like he did was absolutely fantastic. He had a hard time hanging on to the club, and obviously the pain, but he gutted it out and it was cool to watch.

“To do what he did was impressive. You look at that hand, it’s not pretty. Obviously he’s in a lot of pain and he dealt with it fine, and he just grinded his way around the golf course and did what he could. You could see he was fighting all day, every time he made impact, it was going to hurt,” Woods said.

If only the two of them had known then that their respective car accidents 11 years apart would bond them again years later.

In 2010, Cayeux was involved in a serious accident in Zimbabwe when a police truck swerved into his lane and hit him head on. His right leg was shattered, including the knee. His left foot was almost completely severed at the ankle.

It took almost 30 operations of having pins, screws and plates inserted into and on to bones, multiple skin grafts as well as a shortening of both legs just for Cayeux to be able to walk again. He spent months in hospital, more months in a wheelchair and more months on crutches. Since then, Cayeux has been bravely making his comeback to golf.

There is probably no other professional golfer in the world right now who knows what Woods has been through, is going through, and will still need to go through after the accident that has put his career in doubt.

“Every injury is different, but it’s still a mental thing you have to deal with,” Cayeux said of his own injury at the time. “I went through the worst pain of my life in the three months after the crash. After weeks in ICU, that moment when they finally wheeled me outside on my bed – I can’t tell you how beautiful it was to see blue sky and lie in the shade of a tree again.”

Whereas Woods was said to have been found unconscious in the wreck of his vehicle, Cayeux remembered everything in the moments after his crash.

“The car landed on its roof and I remember undoing the seatbelt. My friend was in a car in front of me. He came running to my car and was calling my name. That woke me up a bit. He couldn’t get the door open and I heard him shout that the car was on fire. That’s when I clearly remember saying to myself, ‘I’m not going to die like this’.”

It’s surprisingly reminiscent of Woods’s own words to his team shortly after surgery when he spoke about the threat to his career and said, “It can’t end like this”.

And now it’s Tiger Woods’s 2021 car accident. Woods is well versed in pain, having overcome multiple surgeries and back injuries before, and famously winning the 2008 US Open with a broken knee. But whereas the rest of the golf world is speculating, Cayeux will know what comes next for Woods.

The questions that Woods will likely have in his own mind are probably very similar to those Cayeux admitted having.

“There are always those questions in the back of your mind as to whether you can in fact compete again, and are you going to make it back? I had my bad days,” Cayeux said. “But I kept saying to myself, in golf it’s about how you bounce back.

“In a round if you make a bogey or double bogey, it’s all about bouncing back and making a birdie. I kind of looked at it that way and thought, well, this is a big thing that’s happened to me. So, it’s how I bounce back that’s going to make the difference.”

In 2005, Woods was right to be in awe of Cayeux. And the Zimbabwean has shown a level of bravery and resilience almost unprecedented in the game of golf in his quest to get back to playing the game for a living.

If there is a Grand Slam for the five golfers to have won all four Majors in their careers, there should perhaps be a Grand Slam of Guts. That would include Ben Hogan’s 1949 car accident when a bus hit the car he and his wife were traveling in – only for him to win the US Open 16 months later; and Cayeux’s 2010 car accident and subsequent fight to get to the point where he has managed to play competitively on the Sunshine Tour. He had a top-10 finish on the Sunshine Tour in 2018.

And now it’s Tiger Woods’s 2021 car accident. Woods is well versed in pain, having overcome multiple surgeries and back injuries before, and famously winning the 2008 US Open with a broken knee. But whereas the rest of the golf world is speculating, Cayeux will know what comes next for Woods.

“It’s hard to explain when you’ve gone through so much. When I was lying in that hospital bed, I did dream of winning a tournament again,” he said.

“If you don’t dream it then you are focusing on the wrong things. So, staying focused and believing I would compete again was big for me. A lot of people told me I wouldn’t make it back, and I enjoyed meeting these people because it pushed me harder to turn that negative into a positive.”

As Woods faces the biggest comeback of his career, perhaps he will remember his words about Cayeux in 2005: “You could see he was fighting all day.”

And this is going to be one hell of a fight. DM168