Golden Arrows on target thanks to head archer Mandla Ncikazi 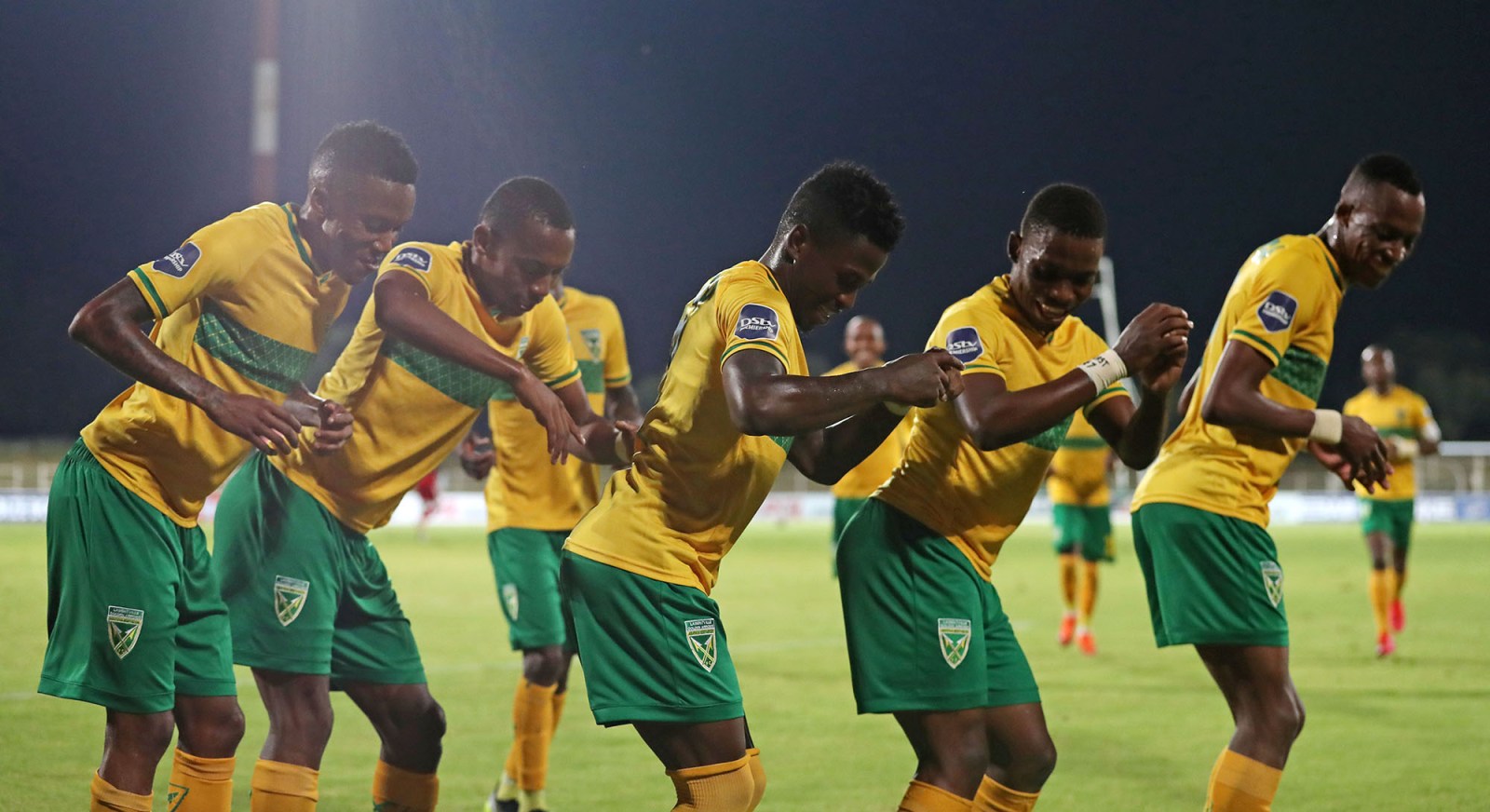 Golden Arrows celebrate a goal with teammates during the DStv Premiership 2020/21 match between Tshakhuma FC and Golden Arrows at the Old Peter Mokaba Stadium in Polokwane on 10 March 2021. (Photo: Muzi Ntombela / BackpagePix)

So far, this season has been the stuff of dreams for Durban’s Lamontville Golden Arrows.

Ncikazi’s side, after yet another victory and their second successive one as they faced Limpopo sides Black Leopards and Tshakhuma Tsha Madzivhandila (TTM) this week, are up to second on the DStv Premiership log.

For a team that doesn’t possess as many resources as some of the teams looking up at it from lower down the ladder, it is an impressive return. As always, Arrows coach Ncikazi was humble and gracious in victory.

“We are just grateful as a team to get six points in Limpopo. It was not easy,” Ncikazi said after their 2-1 victory over TTM in midweek.

“But we are happy that the players could take the load and run in weather conditions like it was in Venda. We are still in the objectives that we planned pre-season, of getting 10 points in a group of five [matches].”

In February Arrows were crowned the champions of the second quarter in this season’s Premiership’s campaign. In the process they became the first side from KwaZulu-Natal to pocket the Q-Innovation’s prize money.

During the seven-game period, Abafana Besthende were sharper than the rest, piercing opposition defences with ease.

They won five of their matches, losing one and drawing another. In the process they managed to edge log leaders Mamelodi Sundowns by one point to secure the quarter.

A bit of complacency did creep into the team’s performances right after success in that battle, as they drew one and lost another. However, it seems Ncikazi has managed to drill it into his players once more that the season is a marathon.

“I hope we can manage the little success [we have had]. We shouldn’t do what happened previously when we won the Q2, then in the next matches the mentality was not right [in a 2-1 home loss to Leopards and 0-0 draw against Baroka],” said Ncikazi.

“The players have been marvellous, but I want them to keep the focus that has made them what they are.”

Having been relegated to the GladAfrica Championship in the 2013/2014 season, ending a 13-year stay in the top flight, Arrows bounced right back after just a season in the lower division.

Since their return, they have either finished eighth or just outside the top eight. Their highest finish in their history in the league is fifth, which they managed in the 2002/2003 season, and again in 2008/2009. This season it looks as if they will match that at worst, or finish even higher should they continue with their current form.

In the past two seasons the KwaZulu-Natal side has missed out on a top eight finish. They finished tenth in the 2018/2019 season, and then 12th in 2019/2020, this after having finished eighth in the two consecutive seasons prior. In both those seasons where they secured a top eight spot, they ended the season with 38 points.

This season, they find themselves comfortably perched on 35 points, with 11 games still to play. On the current trajectory they are en route to surpass their record points haul in a single season, the 51 points that saw them finish fifth in 2002/2003.

Speaking in February after their Q2 triumph, Arrows’ Nkosinathi Sibisi revealed the secret behind their current run by hailing Ncikazi for forging camaraderie among the players.

“Coach Mandla brought in confidence within the group as well as mental strength to always keep going regardless of what is happening in matches,” Sibisi told KickOff.com. “There is also unity among the players who are playing and those that aren’t playing as regularly as they would wish, and I think that has been key to the little success we have been able to achieve this season.”

One thing that has worked in Ncikazi’s favour is that up until this point, he has largely played a sidekick role.

He has also overseen Arrows’ successful player development programme, when he served as the club’s head of development and nurtured some of the players he finds himself coaching now.

So, when he was promoted from assistant to head coach following Komphela’s departure to Masandawana at the beginning of this season, only those who have followed his journey in great detail would have had some kind of expectation of him. For the average football follower, he was an unknown entity.

And unless you’re coaching at Pirates, Sundowns or Kaizer Chiefs, that tends to lessen the air of expectation, and subsequently the pressure. However, just over halfway through the season, everyone knows Ncikazi, his mannerisms and his football philosophy.

But this newfound attention and fame have not distracted the 52-year-old. He has merely kept his head down and gone about the job at hand, which is to ensure that his side finish as high as possible on the premiership table.

With Sundowns as ruthless as ever in the league, Abafana Besthende’s most realistic chance of silverware was in the Nedbank Cup.

They were unlucky to be pitted against fellow KZN side, the highly ambitious AmaZulu, in the first match and fought valiantly, only to lose out on penalties.

No doubt that disappointment has been set aside as they put all their focus on the league. A second-spot finish would see them play in CAF Champions League, while third would see them in the CAF Confederation Cup. And first? Well…

Ncikazi will be hoping to keep his troops grounded in this regard, and will undoubtedly be telling them to take each game as it comes, as opposed to fantasising about the bigger picture and then tripping mid-race.

With Nedbank Cup action taking place this weekend, Arrows are next in action against Cape Town City on 20 March.

“I just hope that now, in the next match against Cape Town City, we keep the same mentality that says ‘we have not won anything [yet]’,” said Ncikazi.

They may not have won any silverware yet, but Ncikazi and his side have played themselves into the hearts and minds of DStv Premiership followers this season. DM168