Nigeria has a kidnapping epidemic fuelled by terrorists, criminals and ‘bandits’ 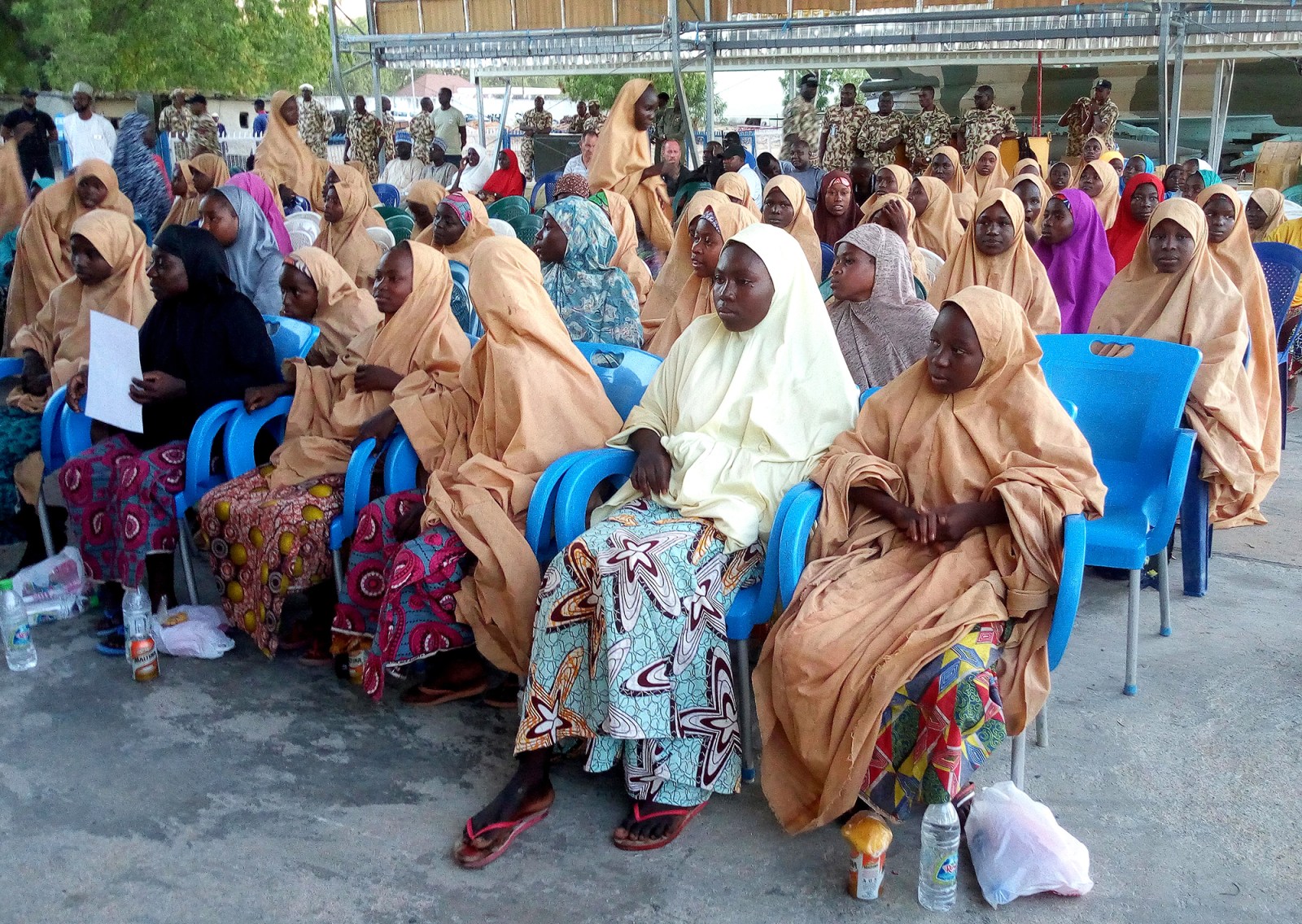 Military and government officials supervise the airlift of the rescued girls at Maiduguri Airport, Nigeria, on 21 March 2018. While some women are forcibly recruited or collaborate unwittingly with violent extremist groups the groups, others join of their own accord. (Photo: EPA-EFE / STR)

Much of the world may have forgotten the Chibok girls, but their abduction was just the start.

Seven years ago the world finally sat up and took notice when the violent jihadist extremist group Boko Haram kidnapped 276 girls from a girls’ school in Chibok, in Nigeria’s Borno state.

There had already been many kidnappings in Nigeria. But the large number of girls taken on the night of 14-15 April 2014 brought it all home.

The world was riveted. The #BringBackOurGirls hashtag went viral, especially when then US first lady Michelle Obama adopted it. International attention focused for months on the government’s faltering efforts to rescue the girls. Many were rescued or escaped, singly or in batches over the years. But about 100 have still not come home, according to experts. They believe some of those, forced to marry their captors, may have chosen to remain with their husbands on the run.

Now the world’s attention has moved on but the kidnapping hasn’t. And kidnapping, particularly of schoolchildren, is becoming an ever more lucrative business.

And Boko Haram is not the only one responsible. The country is suffering from a pandemic of kidnapping, which is not only carried out by terrorist groups but also by common criminals seeking ransoms. Even disenchanted herders in conflict with farmers over scarce land are now getting in on the act. Just this week a gang of “bandits” abducted 25 people in the country’s central Niger state in Kutunku and Adidi villages.

Last week, 18 travellers were abducted in the area when their vehicles were stopped at a bogus checkpoint mounted by bandits.

Last month, 42 people, including 27 schoolboys, were abducted from a boarding school in Kagara, Niger state.

In Nigeria’s northwest Zamfara state, on 26 February 2021, 317 female students aged between 10 and 17 were kidnapped by armed bandits from the Government Girls Science Secondary School, a boarding school. They were released on 2 March.

In December 2020, kidnappers abducted 344 schoolboys in Kankara, Katsina state. In both incidents, all were released.

In February 2018, 110 girls were abducted from a girls’ school, in Dapchi, Borno state. They were also released.

The tendency to release kidnap victims is a sign that ransoms are being paid and that the kidnapping business is booming. And boarding schools in the largely Muslim north of the country, Boko Haram’s hunting ground, are the marketplace for this growth industry.

Martin Ewi, a senior researcher at the Institute for Security Studies (ISS), says the graph of kidnappings in Nigeria has climbed steeply over the past four decades.

There were only two known kidnapping incidents in 1983. But by 2013, the number had risen to more than 3,500 annually. During the past five years, data shows that an average of 15 people are kidnapped every day in Nigeria. These are very modest estimates as most kidnappings for ransom incidents are not reported.

The act of kidnapping has also become deadly. Over the last decade, there were 644 kidnapping incidents in which 1,331 people are known to have been killed, according to Nigeria’s SBM Intelligence.

Kidnapping is being done for commercial, political, social, philosophical or ideological goals, as well as personal vendetta. And it is not always easy to distinguish who is responsible for particular incidents.

Ewi says there is a steady stream of probably daily targeted kidnappings of wealthier individual Nigerians, for ransom. Professional footballers have been among the targets. In 2012, the mother of then Nigerian finance minister Ngozi Okonjo-Iweala, now the new director-general of the World Trade Organisation, was kidnapped. The kidnappers demanded that the finance minister resign on television, but when she refused, they settled for a $60,000 ransom, The New York Times reported.

Kidnapping has become one of the most lucrative industries in Nigeria. Kidnappers may earn up to $2-million per victim or be paid in kind with cars or houses.

But the latter are usually of groups and so the total number of victims might be higher, researchers suggest. There are many perpetrators of kidnapping in Nigeria, ranging from small criminal gangs and disgruntled family members to terrorist groups. But the major ones are kidnapping gangs, terrorist groups (Islamic State West Africa Province, Boko Haram, the Movement for the Emancipation of the Nile Delta and others), herders and bandits, Ewi says. There are growing linkages between the groups, to the extent that one group kidnaps and sells to another. For example, it is believed that bandits or herders are working with Boko Haram by kidnapping people and selling them to the jihadi group, which then demands a ransom from their families.

Ewi says: “Kidnapping has become one of the most lucrative industries in Nigeria. Kidnappers may earn up to $2-million per victim or be paid in kind with cars or houses.” But with the rise in kidnapping of poorer schoolchildren rather than wealthy individuals, the ransom per person has dropped – though the total ransoms remain high because of the numbers involved.

These ransoms may be as little as $100 or even less per person – still very high for a poor family, though it seems states are paying most of the ransoms.

With political kidnapping, the reward can be an exchange of prisoners. For example, in May 2017, 82 of the Chibok girls were reported to have been returned in exchange for the release of five Boko Haram fighters.

Between June 2011 and March 2020 it has been estimated by SBM Intelligence that at least $18.34-million in ransom was paid to kidnappers in Nigeria. And just under $11-million of that was paid out between January 2016 and March 2020, “indicating that kidnapping is becoming more lucrative”.

The rewards for political kidnappers are not all financial. They include spreading terror and gaining power and publicity, which certainly worked in the case of the Chibok girls – the kidnapping really put Boko Haram on the global map.

Ewi adds that Boko Haram has also kidnapped to avenge casualties it has suffered in attacks by Nigerian security forces. A motivation may also simply be sexual gratification: kidnapped schoolgirls are forced into sexual slavery.

He says kidnapping is becoming increasingly deadly. The impact on Nigeria is growing, too. He notes that the UN Children’s Fund, Unicef, has estimated that about 10.5 million children are not in school, even though primary education is free, for fear of kidnapping.

It also hurts the climate for investment. Ewi says it creates an environment for corruption. Some officials are believed to skim a portion of ransoms for themselves.

Ewi sees no signs that the Nigerian government is pursuing a comprehensive strategy to deal with the kidnapping or the underlying problems. And there are inconsistencies. On the one hand, the government has relied very heavily on a military response – which has brought some allegations of brutality. On the other, many officials are indulgent of kidnappers, he says, treating them as if they are normal legitimate political actors.

Ewi criticises the Muhammadu Buhari government for its handling of the crisis. For example, he says the growing incidence of kidnapping by nomadic herders is a by-product of their clash with settled agriculturalists. The Buhari government is trying to address the problem by allocating agricultural land to the herders. But the herders are nomadic and need to keep moving their cattle to new grazing land.

Yet attempts to deal with the problem as tribal are also misguided, he says.

Although the herders are mostly Fulani, the agriculturalists are of various ethnicities. Owners of cattle are not only Fulanis but are rich landlords from various ethnic groups who still prefer the traditional herding system.

“It may be time for Nigeria and Africa as a whole to look beyond traditional military responses to kidnappings,” he says.

SBM Intelligence adds: “This is a national emergency that must be seen as such because it strikes at the legitimacy of the country’s longest democratic stretch.” DM168