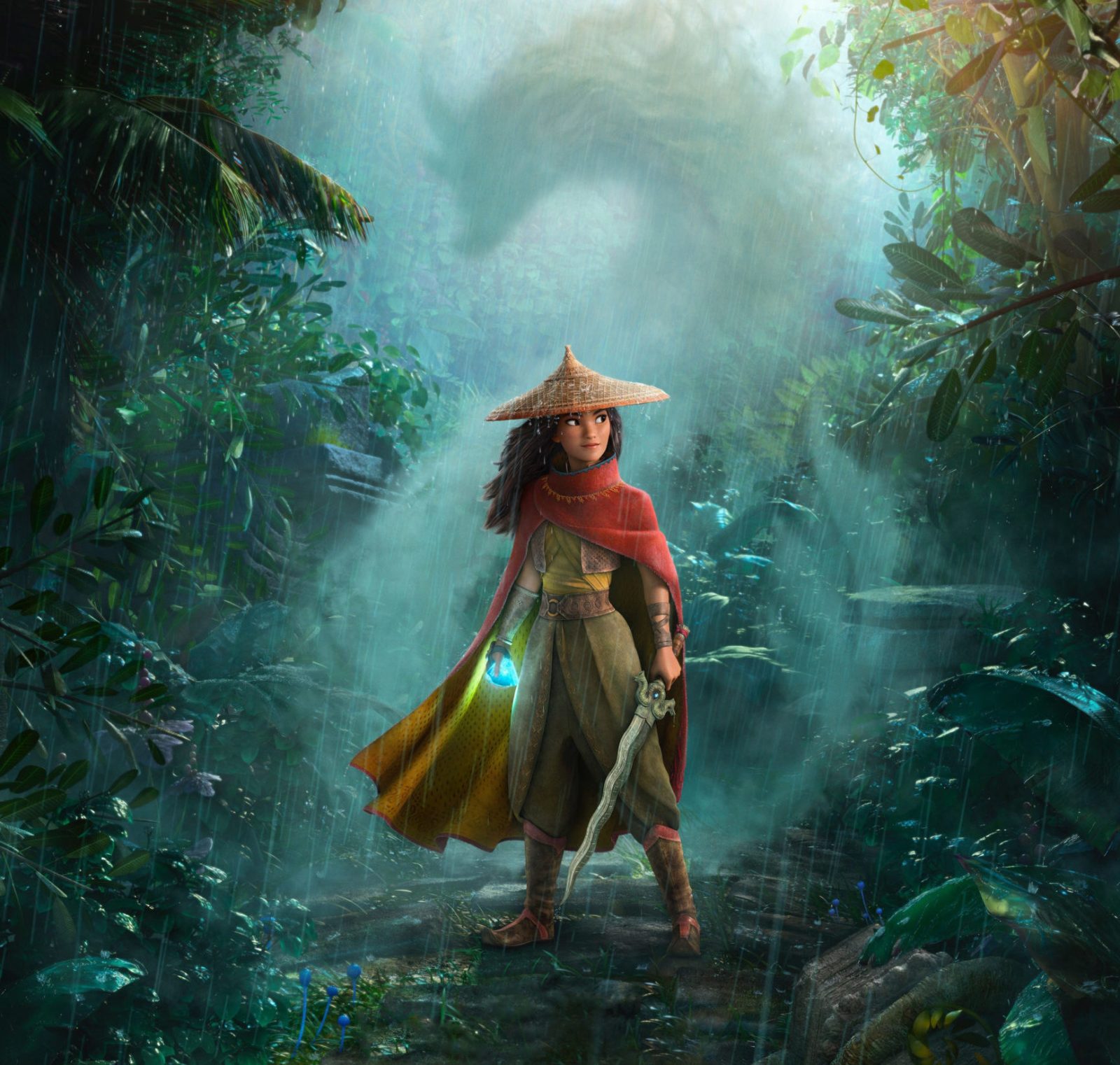 The latest Disney film is the first to have been made primarily at home. It’s a thematically complex fantasy adventure with breathtaking world-building, stylish character design and dynamic CGI animation.

How would you describe the personalities of the classic Disney princesses: Cinderella, Sleeping Beauty, Snow White, or Ariel The Little Mermaid? Kind? Polite? Maybe they’re best summed up simply as “nice”. It’s a difficult question because they were designed to be as mild as possible. They were the same formulaic non-character – a perfect, pretty, good girl, who needs saving from a gallant prince.

These days most Disney princesses conform to a formula on the opposite side of the personality spectrum – girls and women who are the heroes of their own stories, who are flawed, complex characters with attitude and charm. This isn’t necessarily because Disney set out to tow a more feminist line; strong multidimensional female leads just go down better at the box office.

Raya and the Last Dragon

Kelly Marie Tran of Star Wars: The Last Jedi, is the voice of Raya, the latest Disney princess, but she’s not the kind who sings ballads or wears flowing dresses. She’s a sword-wielding lone rider who fights like a ninja with unbridled determination to exact revenge – she’s essentially the Disney equivalent of Kiddo, Uma Thurman’s character in Kill Bill.

Raya and the Last Dragon premiered in cinemas and on Disney+ on 5 March. It’s set in the prosperous land of Kumandra, an idyllic paradise in which people live alongside magical dragons. But in the past 500 years the wrath of evil spirits has eradicated the dragons and divided Kumandra into five distinct warring nations, which are based on the Southeast Asian cultures of Brunei, Singapore, Timor-Leste, Laos, Thailand, Cambodia, Vietnam, Myanmar, Malaysia, Indonesia and the Philippines.

Raya is a chief’s daughter on a world-saving quest to find a magical gem that can defeat the forces of evil, accompanied by her animal sidekick and super-powered, shape-shifting mythical hero companion.

If you’ve ever watched Moana, read that last sentence again. Look familiar? Disney has found a recipe that works and its unashamedly sticking to it. Just as in Moana, the entire cast are people of colour, based loosely on extant cultures, and the positions of power in the plot are female-dominated.

But despite its similarities, Raya and the Last Dragon doesn’t feel at all like a copy, primarily because of its stylish character design and breathtakingly detailed world-building. Its modern characters inhabit a unique ancient world.

Each of the five nations has been designed with the utmost care. The nameless “extras” in the background have identities as pronounced as the main characters. The architecture and atmosphere of every set has personality – at no point does it feel like you’re in a typical desert or an archetypal night market. Rather, you’re in the deserts of Tail, with its unmistakable rock formations and ecology, or the vibrant lantern-lit floating markets of Talon, with its bristling wooden side-streets and characteristically colourful garb.

The secret to Raya and the Last Dragon’s authenticity is the meticulous research that went into it. The team travelled all over Southeast Asia, and brought on Southeast Asian linguists, architects, cultural experts and anthropologists to ensure the cultural portrayal of the film was respectful and believable.

The numerous fight sequences were inspired by Kali, the national martial art of the Philippines, and the team chose a female choreographer to make sure that the movements of female characters during combat appeared natural.

This brings us to the magnificent CGI animation. The first thing you’ll notice is the exquisite lighting and colour palette. Each scene is more striking than the next. The animation style is expressive and fun, but also crisp and stunningly realistic, especially in its dynamic movement.

This is even more impressive considering that Raya and the Last Dragon is the first Disney movie to have been animated primarily at home. Microphones and recording equipment had to be mailed to voice actors all over the world, and mastered on a case-by-case basis.

The exceptional voice-acting cast is made up almost entirely by Asian Americans. The standout performance is Awkwafina as the goofy, raspy-voiced water dragon Sisu, who matches Eddie Murphy’s Mushu from Mulan with her lovable laugh-a-minute comedy.

Sisu’s character design is a testament to the talent, cohesion and strategic decision-making in Raya and the Last Dragon. Sisu is perfectly poised to wow any audience. Her fluffy, expressive My Little Pony face will certainly have kids in a frenzy, but the energetic flowing movement of her snake-like body, much like Haku in Spirited Away, will mesmerise across the board. Her design is balanced, much like Toothless from the How to Train your Dragon franchise, so that at times she is grand and imposing and at other times approachable and cute.

Often what distinguishes Disney’s best films from the rest is how enjoyable they are for adults. The character arks and sociopolitical themes in Raya and the Last Dragon are fairly mature for a blockbuster animation and bound to start some novel conversations if you’re watching with your kids.

Half of the band of misfit heroes in the film begin as Raya’s foes. This teaches us that when you understand the motives of both sides, there doesn’t have to be a villain for there to be a conflict. Just as in Moana, in the end there is no real antagonist. Raya’s ultimate heroic moment is not a fight scene, it’s her decision to choose compassion, and take the risk of trusting someone who has hurt her in the past.

The film also deals with family expectations, man’s environmental footprint and deconstructing the cycle of fear and prejudice. These layered themes do tend to be over-explained through character dialogue to make them more palatable for children, but this ensures that they serve a greater purpose than gifts to parents while their kids mindlessly gawk at magical dragons.

The closure of many theatres worldwide will put a huge muzzle on Disney fever. Still, Raya and the Last Dragon may well soar to stratospheric heights, purely on the back of its own merit. DM/ML

Raya and the Last Dragon is available in cinemas and on Disney + with Premier access.