The things we do for love: Kazuo Ishiguro’s ‘Klara and the Sun’ 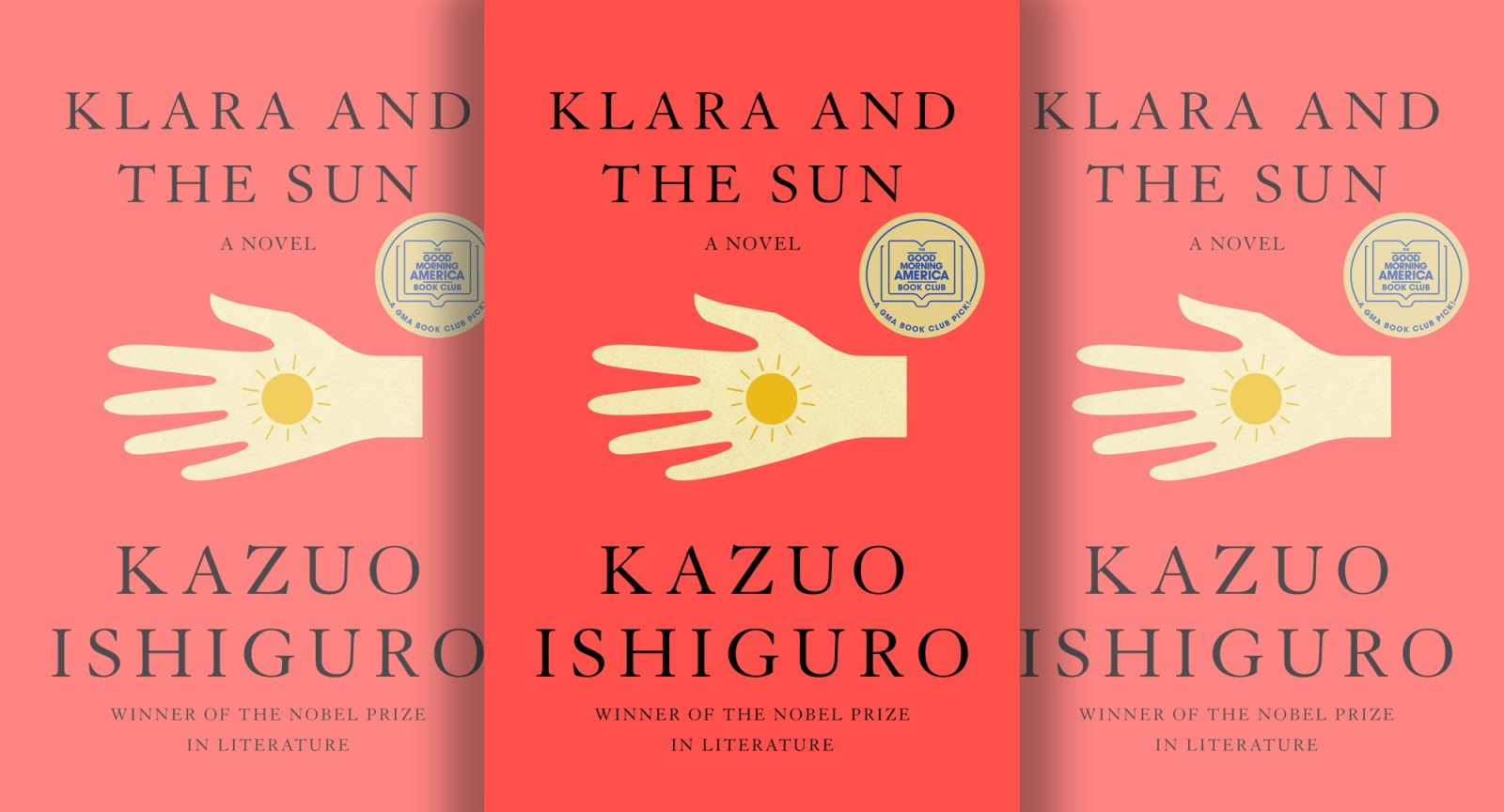 In his latest novel, British author and screenwriter dares you to resist falling in love with the technology that threatens to replace us.

Set in a high-tech near-future, the Nobel Prize-winning author’s new novel is a work of science-fiction about the human heart. And it works on your emotions like a perfectly designed algorithm.

Kazuo Ishiguro’s eighth novel unfolds with splendid ease, a sort of relaxing rhythm that should settle and soothe. There are no words you need to wonder about, no convoluted sentences.

They are literary conceits that, wielded by a lesser writer, might hint at the mundane, affect boredom.

In the hands of a master, though, the universe explodes.

There is nothing settling or soothing. Something is bubbling beneath the calm surface. Ominous clues are planted; something too dreadful to name is foreshadowed. Some unspeakable tragedy lies in store. It is imminent and diabolical.

And yet the steady pace endures.

The Sun comes up. It disappears.

A sense of steadily mounting menace seeps off the pages as the story simmers oh so effortlessly.

Ishiguro has you from the first simple observation made by Klara, the likeable, kind, curious, and highly relatable “Artificial Friend”, or AF. She – despite being wittingly non-human – narrates the gently unfolding saga with such deep empathy.

It’s her capacity for perception that makes her – to us, at least – seem so human. While one woman Klara meets likens her to a vacuum cleaner with a face, we readers who are privy to her most intimate “thoughts” and “feelings” know that she is anything but an appliance.

We are aware, too, of just how much Klara notices happening in the world around her. How her awareness stretches towards and penetrates the emotional spectrum. She may be naïve, still figuring things out, but she sure has heart.

Her “emotions” may be algorithmic responses, her ethics programmed into her, but they are part of her and she experiences them fully.

And they are quite real to us, too.

Klara’s initial observations – from within the store where she is on display, a product for purchase as a walking-talking companion for a privileged child – are a reflection of the complexity of her programming.

She notices things that are subtly disturbing (such as tiny fascist tendencies among superior model AFs). She is touched by acts of passion (she is moved by the sight of people hugging on the pavement). And she has the capacity for poetic observation, too (suggested by her adoration for the Sun and conviction that he pours some “special nourishment” into the world). She may be initially naïve to the deeper complexities of human behaviour, but she is savvy enough to “get us” in ways we could not possibly understand. Klara embodies what Yuval Noah Harari regards as AI’s capacity to know us better than we know ourselves.

And so what we have is an eerie, sometimes surreal science-fiction novel that has been described as dystopian. And in some ways it is. While the near-future Ishiguro constructs is not the savage post-apocalyptic wasteland some science-fiction imagines, it is downright creepy. We quickly discover that among the technological innovations available in this projected future is that (well off) parents have the option of having their children “uplifted” through genetic editing.

Such “uplifted” children are intellectually and creatively bolstered, their academic and professional futures secured. Children who are not “uplifted” are almost entirely excluded from higher education, their prospects severely limited as they must rely on their natural abilities and thus find their way in this tech-driven world.

But as Klara observes the realities of life for the family she joins, it becomes evident that our appetite for self-improvement has inadvertently triggered a few kinks in the original hardware.

Among the clues that are planted is the diminishing health of the “uplifted” girl who chooses Klara as her AF.

Ishiguro has imagined a tantalising compromise for these not-too-distant-future parents: They can use technology to bolster their children’s chances at a superior life, but must face the possibility that their children’s health will suffer and that they may not survive into adulthood.

Another, even more sinister, clue planted early on? Before purchasing Klara, the sickly girl’s mother asks her to demonstrate the astuteness of her observational skills by having her imitate her daughter. She wants Klara to replicate the child’s slightly cautious, uneasy gait.

Yes, creepy. And it gets steadily worse.

So while it’s not so much a dystopia based on ecological disaster or war, Ishiguro’s imagined future is one in which technology is rapidly chipping away at our humanity. But Ishiguro’s interest is not in rehashing the arguments for and against the coming technology. What he’s curious about is humanity and the nature of that most fragile, imperfect and hard-to-understand thing that sustains us all. Love.

Examined here is not only the bond of love that exists between a mother and her dying daughter, but love in its myriad forms. There’s the faded love of broken marriages, the post-love vindictiveness of failed romances, the fairytale love between childhood sweethearts.

And the love an AF feels for her human family.

Also examined is what humans are prepared to do for love, the lengths we’re willing to go to for love. The deceptions, the lies we tell ourselves, the pain of broken hearts, the ramifications of loving too deeply, and the suffering we endure as a result of losing those we love. The things we do for love say a lot about our humanity.

And, ultimately, there’s an examination of a machine’s capacity to experience and express love.

Klara is, after all, a computer, an algorithm, an AI. And yet her capacity to love is boundless. To the extent that she is willing to make the ultimate sacrifice. And love certainly isn’t the only irrational human attribute Klara possesses. She has the ability to hope. And she has faith.

This brings us to the other character suggested by the book’s title: The Sun. You see, Klara is solar-powered and so somewhere in her deep programming, she’s aware of the vitality provided by the Sun’s energising rays. In fact, like our ancient ancestors, she idolises the Sun, imbues him with supernatural ability, an almost spiritual power to provide “special nourishment” – not only to keep robots like herself alive, but also to restore humans who are at death’s door.

And so, in one of the book’s most charming diversions into a kind of sublime surrealism, there’s a weird and wondrous, almost goofy, intermingling of science and mythology as we witness Klara, a machine, putting her faith in one of humanity’s original gods. It is Klara’s faith in the Sun – her total belief in his ability to revive, replenish, restore humans to health – that becomes the source of her boundless hope. Her full-blown belief in something outside the paradigm of science and reason.

I couldn’t help feeling my heart break at the idea of this, recognising Klara’s enduring commitment to the humans she was built to serve. The irony of losing your heart to an artificial intelligence that has figured out not only how to be human but has grasped the meaning of true love will not be lost on you.

Worth considering, though, is that the novel’s most astonishing observation about love is not that Klara, a machine, manages to figure out that real love is entirely selfless. The thing to note is that in the process of making this discovery, Klara earns our love.

And she manages to break our hearts. DM/ ML

Japanese-born British author Kazuo Ishiguro won the Nobel Prize for Literature in 2017; according to the jury, his writing has ‘uncovered the abyss beneath our illusory sense of connection with the world’. His novels include The Remains of the Day, which won the Booker Prize in 1989 and was turned into a film starring Anthony Hopkins, and the under-your-skin creepy Never Let Me Go, in which we are drawn into the lives of a group of boarding-school teenagers, only to discover that they’re clones, created so that their organs can be harvested. Klara and the Sun, his first novel since becoming a Nobel laureate, was released worldwide on 2 March.