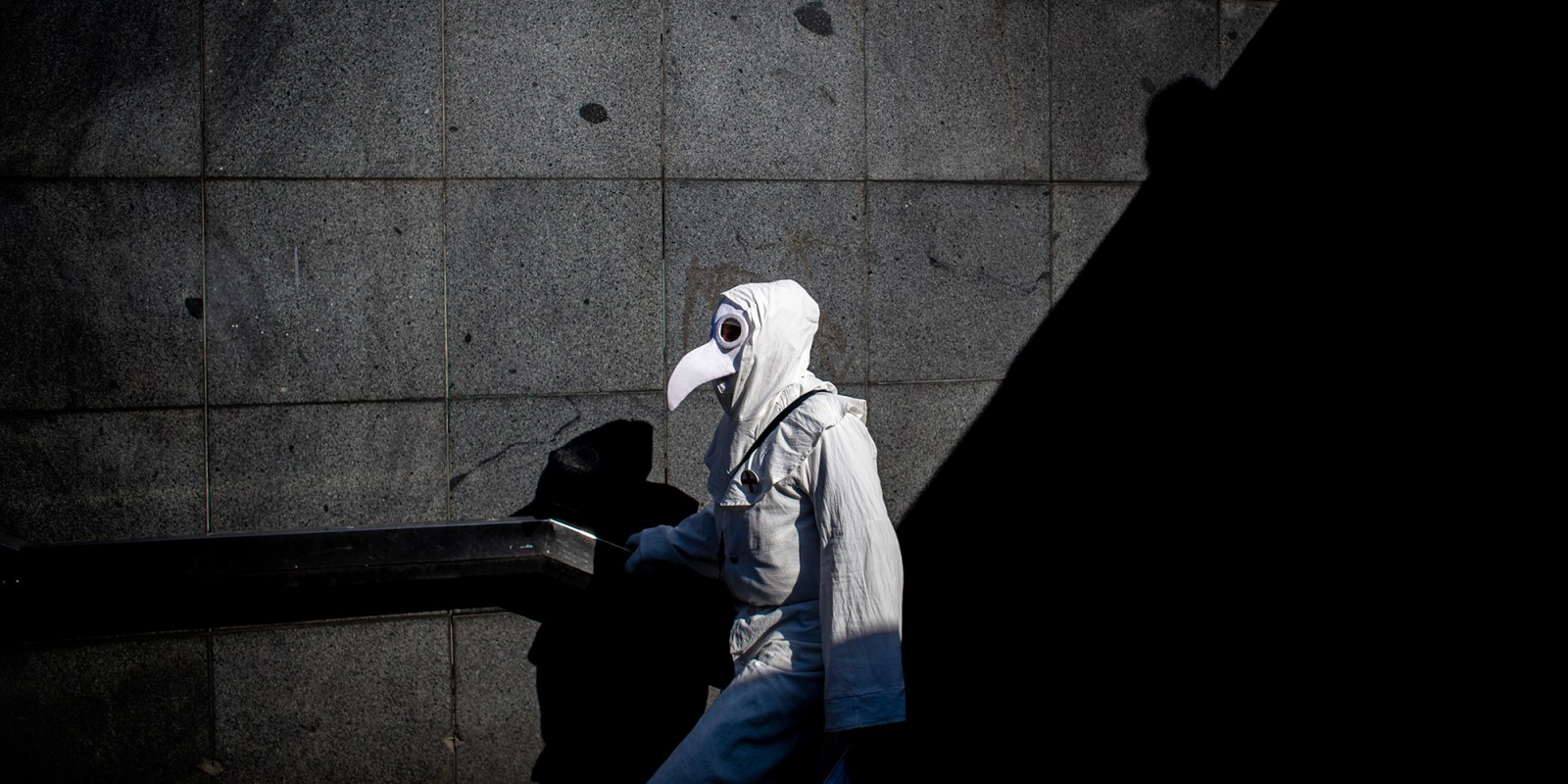 A masked man arrives for a protest in Prague against Czech government measures against Covid-19, 7 March 2021. (Photo: EPA-EFE / Martin Divisek)

US coronavirus cases posted the slowest spread since the pandemic began almost a year ago. The Centers for Disease Control and Prevention said vaccinated people can visit indoors without masks.

Global herd immunity against Covid-19 could be reached next year, Melinda Gates said in a CNBC interview.

The European Commission is “tired of being the scapegoat” for the slow rollout of vaccines, said its president, Ursula von der Leyen.

UK Prime Minister Boris Johnson said more than one third of the population has received a first dose of the coronavirus vaccine as deaths from the disease continue to fall.

“I think we’re all looking forward to that,” Gates said. “There are a lot of people that are suffering, not just in the US, but everywhere.”

The Covid-19 UK variant has spread to 79% of Houston’s wastewater treatment plants, alarming city officials concerned about a new surge in infections.

As of February 22 – the most recent date for which data was available – the variant was found in 31 of the city’s 39 treatment sites, according to David Persse, Houston’s director of emergency medical services. That’s up from 21 plants, or 54%, two weeks earlier, Persse said.

The announcement comes just two days before a statewide mask mandate and other business restrictions aimed at curbing the pandemic will be lifted under an order by Governor Greg Abbott.

Russian vaccine to be made in Italy

A Swiss biopharmaceutical company will produce the Sputnik V Covid-19 vaccine at its Italian facilities, marking the first European production agreement for the Russian shot.

Lugano, Switzerland-based Adienne Pharma & Biotech signed an agreement with Russian sovereign wealth fund RDIF to manufacture the vaccine at its production site near Milan, according to a statement on the company’s website. Italian regulators must still approve the production, but several million doses are expected to be made by the end of the year.

US airline passengers top one million a day

US airlines carried an average of more than one million passengers a day in the past week, the highest non-holiday total since the Covid-19 pandemic began, gutting travel demand in the country almost a year ago.

Sunday’s total of 1.28 million was the third highest since travel collapsed in mid-March 2020, according to data reported by the Transportation Security Administration. The only equivalent periods with that many fliers since 17 March 2020 have been during the traditionally busy Thanksgiving and Christmas periods.

Florida Governor Ron DeSantis said the state is opening up the vaccine to everyone 60 and over starting on 15 March, expanding general eligibility by five years from the previous starting age of 65.

Speaking from Tallahassee on Monday, DeSantis said the state still had more to do to vaccinate the 65-and-over community, but that demand had started to “soften a little bit”.

Official data show at least 2.6 million of the state’s 4.5 million seniors have got at least one shot, but the data are generally reported with a lag.

DeSantis said he expected the number will increase to three million later this week.

The Netherlands will extend its lockdown until the end of March, but slowly ease some restrictions, Dutch Prime Minister Mark Rutte said on Monday. A curfew from 9pm until 4.30am will remain in place, but shopping on appointment will be expanded and adults are allowed to take part in outside sports with up to four people.

The extension means the country, which suffered riots in January over virus curbs, will hold next week’s general election during a lockdown. Rutte also looked ahead to the summer, estimating that four more months are needed to reach a critical number of vaccinated people to allow for a significant easing of restrictions.

WHO concerned about nations with conflicts

The World Health Organisation expressed concern about nations facing conflicts that could halt or slow the response to the pandemic, including vaccinations, officials said at a briefing on Monday.

“The response to the pandemic needs to be a public health response and we have to take out politics,” said Kate O’Brien, head of the WHO’s vaccination division. She said vaccines have a shelf life and risk being wasted if they’re not distributed on time.

Myanmar, Yemen, Syria and Libya have all faced disruption to general health services.

The WHO is having difficulty getting information on Covid and other health issues in many areas, according to Mike Ryan, head of the WHO health emergencies programme.

Wyoming “has seen significant success rolling out the vaccine,” according to a statement issued by the governor’s office.

The move follows the city’s steps to ease Covid-19 restrictions as numbers improve. Chicago has already increased capacity at bars and restaurants to 50%.

UK vaccinates one third of population

More than one third of the UK population has received a first dose of the coronavirus vaccine as deaths from the disease continue to fall.

Prime Minister Boris Johnson announced the milestone at a news conference on Monday, the same day the government took its first major step in easing lockdown restrictions by reopening schools.

“Today we’ve been able to take that crucial first step on what we hope is our cautious but irreversible roadmap to freedom,” he said. “The overwhelming feeling is one of relief.”

Vaccinated people can visit indoors without masks but must still wear them in public and avoid large gatherings when around those who aren’t vaccinated or are at high risk for contracting Covid-19, the US Centers for Disease Control and Prevention said Monday.

The agency issued its long-awaited guidance for what fully vaccinated people can safely do, as vaccinations rise but as health experts warn that the risk of the virus remains, especially with new variants.

The European Commission is “tired of being the scapegoat” for the slow rollout of vaccines, its president, Ursula von der Leyen, said as she continues to face pressure over the EU’s uncertain response to the pandemic.

In a blistering counter-attack against criticism over the European Union’s sluggish Covid-19 vaccination programme, Von der Leyen refocused blame on manufacturers, notably AstraZeneca, which she said hadn’t stockpiled doses as it started producing in Europe.

Prime Minister Mario Draghi pledged strong action to turn around Italy’s slow vaccination campaign, saying an exit path out of the coronavirus pandemic isn’t far away if the country can move faster on vaccinations.

Speaking via video, the newly appointed premier told a Rome conference that his priorities include fuelling a recovery for Italy’s economy, which contracted by 8.9% in 2020. DM

— With assistance by Joe Schneider and Joe Carroll.