Durban xenophobic violence witness: ‘It is a sin that South Africans can do this to their fellow Africans’ 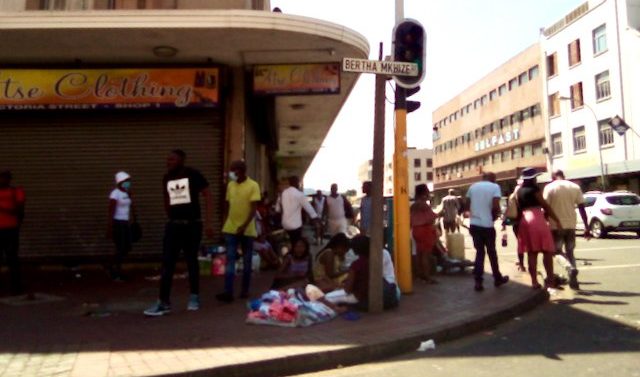 Violence and intimidation against foreign-national traders persist in the latest attack but no evidence of the alleged killing of two immigrants in last week’s incident comes to light.

Abdul Balma, a street vendor in central Durban was stabbed several times and his merchandise torched on Monday according to eyewitnesses.

Balma, originally from Burkina Faso, and another man, from Senegal, were assaulted during the incident which took place at the corner of Ingcuce (Albert) and Bertha Mkhize (Victoria) streets.

According to eyewitnesses, Balma was set upon by a group of about ten men who said immigrants must leave South Africa.

A South African national, who did not want to be named, said the men poured petrol on the clothes Balma sells and set them alight. She said he was brave to have stood up to them, but “they started beating him and he was stabbed”.

She said another man from Senegal was also assaulted.

“We are scared and at the same time, we cannot do anything about this because we have families to feed and we also have to pay our suppliers … It is a sin, shameful and disgusting that our fellow South Africans can do something like this to their fellow Africans,” she said.

Balma’s brother, Apouya Homada, said, “He has been selling on the street for 15 years, and since November last year we have been harassed, intimidated and told to go back to where we come from.”

According to Homada, about two months ago, a group of people started demanding R200 a week from the vendors.

Many immigrant-owned shops closed after the incident.

Balma was released from hospital on Monday evening.

According to witnesses, the assailants claimed to be from uMkhonto weSizwe Military Veterans (MKMVA). But MKMVA KZN convener Zibuse Cele is adamant that their members are not involved.

“Police are at the scene and are monitoring the situation,” said Naicker.

Last week, GroundUp published an article about an attack on immigrant traders at the Sunday Flea Market on 28 February in which eyewitnesses alleged that two people were beaten to death. But we have been unable to find any evidence of the killings – no bodies located, no murder cases opened, no relatives looking for anyone missing.

Last week, Acting KwaZulu-Natal MEC for Community Safety and Liaison Kwazi Mshengu said “incidents, which may be perceived as xenophobic violence, have no place in society”.

He said, “We call on everyone to be responsible and stop circulating false information which causes unnecessary panic.”

On the same day, more than 20 women traders from the flea market went to the Durban Central Police Station to submit statements about the Sunday attack.

Clarice Asobwe Ngena, from the Democratic Republic of Congo, said they are tired of being intimidated and having their hard-earned money and stock taken away from them.

Nicole Nyange, also from DRC, said that immigrant traders no longer feel safe in this country.

In a statement on Monday, the South African Human Rights Commission said it was “deeply concerned by the recent attacks on non-nationals, which commenced on Sunday” at the Soldiers Way Market and “condemns these on-going violent attacks and the looting and threats on businesses owned by non-nationals in the city”.

It said the attacks had the “potential to trigger further xenophobic incidents and attacks on non-nationals in other parts of the province as well as nationally”. DM