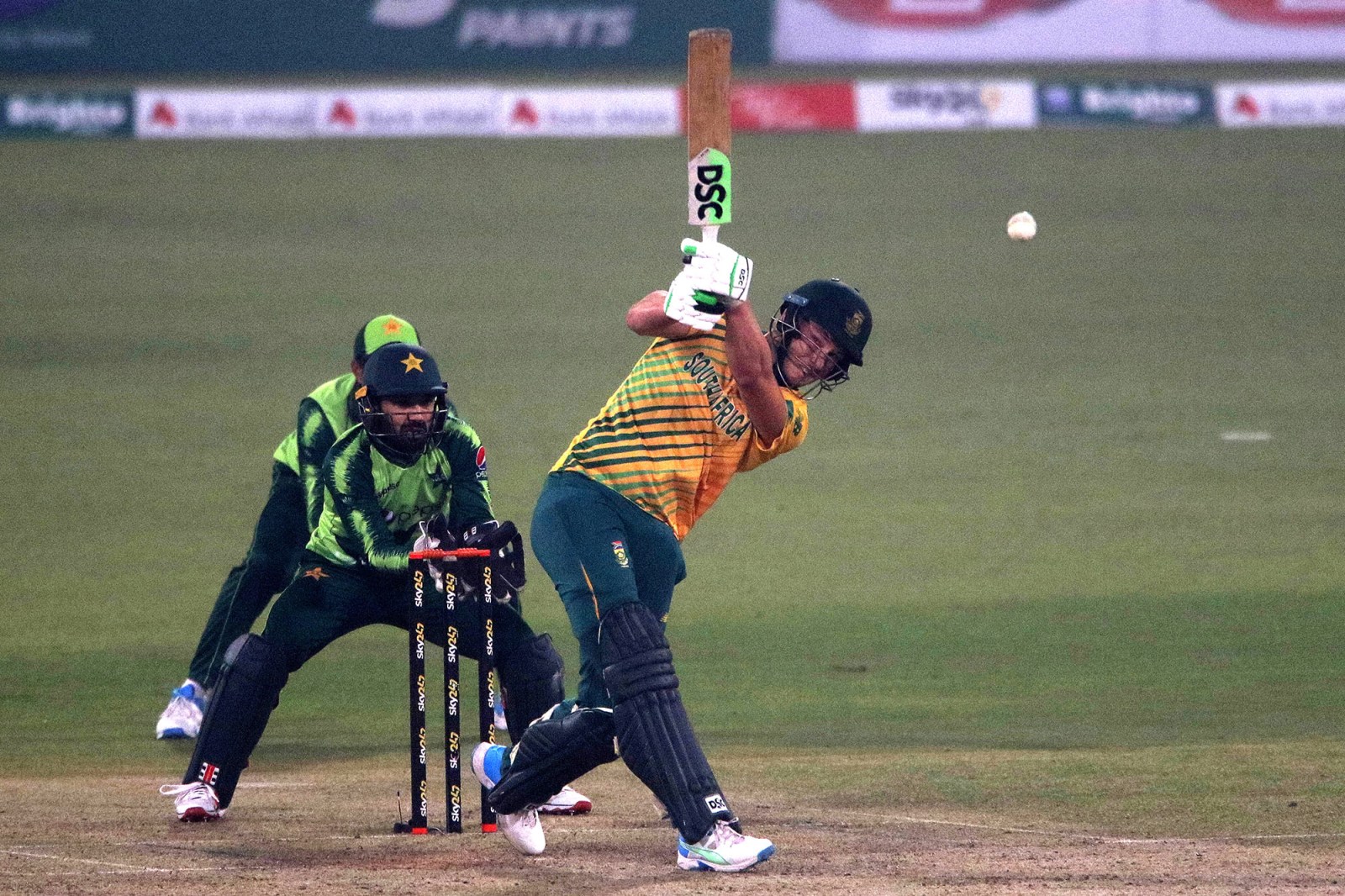 David Miller plays a shot during the second T20 match between Pakistan and South Africa in Lahore on 13 February 2021. EPA/RAHAT DAR

After 16 years the era of franchise cricket will cease to exist as South Africa returns to a 15-team, two-division provincial format at men’s professional level in 2021/22.

One of the major issues that led to the weakening of former Cricket South Africa (CSA) chief executive Thabang Moroe’s grip on power – a decision to restructure the men’s game – will become a reality next season.

CSA have decided to return to a 15-team professional provincial format that will replace the six-team franchise system, which was developed in 2004/5 with the view to more strength vs strength competition.

The new format will see a split between an eight-team first division and a seven-team second division. For the first two seasons there will be no movement between the leagues, but in year three (2023/24) promotion and relegation will come into play, raising the stakes significantly.

Relegation will be weighted by performances across three formats of the game, which means success in one discipline might not be enough to keep a team in the top tier if they fail in the other two.

It will force provinces to recruit wisely and deeply consider the types of players they need across three formats. It will also create an environment where every game counts, because even if a team is out of the running to win a title, they might be in a desperate fight to avoid relegation.

The eight first-division provinces will contract 16 players while the seven first-division teams will have a budget for 11. Age-group and colt teams at the various unions will provide some depth in case of a player shortage.

The idea is to reduce the overall wage bill in South African cricket and force the affiliates to be more proactive in seeking out sponsorships and marketing deals to compliment budgets.

“In the long run we definitely expect the process to save CSA money,” Pholetsi Moseki, CSA’s acting chief executive, told the media. “More than that we hope it will allow the affiliates to commercialise themselves better and chase opportunities in the market.”

Get out and do some work on funding yourselves, is the message.

It’s not that the parent body has cut the purse strings entirely and sent the children out into the world without a credit card.

The eight first-division franchises will have an annual player budget of R9.3-million, with an agreement that they can top it up by 10% through private funding.

It’s another form of incentive for the teams to be proactive in finding other sources of income independent of CSA.

There is also scope in the contracts for the division-one teams to recruit some players on three-year contracts, as opposed to the current one- and two-year contracting system. It offers players more job stability and gives unions the opportunity to lock in quality players for longer.

Background to the change

When Moroe unilaterally announced a restructure of the game in late 2018, he met resistance from the South African Cricketers’ Association (Saca). A restructure had been mooted from 2016 as budgets became tighter and income at CSA was increasingly dwindling.

But it was the way Moroe decreed change, rather than logically working through scenarios with affected parties, that led to the impasse. He would not provide answers to queries or detail on how the decision was reached, and unilaterally declared a 30% wage cut for top players. That went down like a fumbled slip catch with a vast majority of Saca’s members.

Exasperated by the way they were dismissed by Moroe and then-president Chris Nenzani, Saca filed court papers to stop the move until a proper consultative process had taken place.

Moroe’s original decision to restructure the game was a political move to shore up support in the provinces that would entrench his position, rather than a long-term vision of reshaping a domestic game that was in need of a shake-up.

It was a decision that started a chain reaction leading to the Fundudzi Report, which uncovered a wide range of management failures by Moroe and his board. Moroe was suspended and then dismissed and the board resigned en masse late in 2020.

The situation at CSA is more stable as an interim board works through the flotsam and jetsam of several calamitous decisions. But it all started with Saca’s court papers and in a way has come full circle with the move back to provincial cricket teams rather than franchises.

Moroe’s original plan for a 12-team provincial structure was put on hold in late 2019 after his suspension, and former International Cricket Council CEO Dave Richardson was appointed by CSA to lead a detailed study to assess the viability of a new structure.

One of Richardson’s first ports of call was Saca. After all, whichever way the restructure went, there were going to be job cuts because the number of professional and semi-professional cricketers would be reduced under any new plan. Saca, the representative body, would have to manage the cull.

After Richardson brought Saca to the table, they dropped their court case in a new spirit of cooperation fostered by then-acting CEO Jacques Faul.

Richardson’s task team did its work and a series of ongoing consultations saw up to 15 different models for the restructure tabled at numerous meetings with a wide variety of parties, further exposing the folly of Moroe’s dictatorial approach.

The 15-team format won out, reducing men’s cricket from 21 teams (15 unions and six franchises). It effectively means about 75 players will lose their jobs as the system scales back from close to 280 professional cricketers to 205.

Although it will save some money from CSA’s annual budget, and was done with Saca’s backing, the union is still cautious about heaping too much praise on the new format because there are numerous challenges facing cricket globally and CSA in particular.

“The Proteas men’s team generates more than 80% of CSA’s revenue,” Saca CEO Andrew Breetzke said. “We need to be competing at the highest level, we need to be at the table with the big three [India, Australia and England], and therefore we need a strong [men’s national team].

“That means domestic cricket would have to be as healthy as possible. We need our top players playing, they must be playing competitive cricket, and the step-up to international cricket must be as close as possible.

“Within that domestic structure we need a strong transformation pipeline. Our teams must represent the demographics of South Africa, while CSA remains financially viable and sustainable. We have a consistent fear about the financial sustainability of cricket in South Africa and in the world at the moment, for that matter.”

Bidding process and the search for excellence

Provinces had to put in bids to Richardson’s four-person committee once the framework of 15 teams in two divisions had been agreed in principle. The committee used a scorecard, which CSA’s senior management and the provinces agreed on, to measure the bids.

“The committee’s role was to make sure that all the data used to populate that portion of the scorecard which evaluated the historical performance and current status of the members across the seven key dimensions, were correctly captured and the weightings correctly applied,” Richardson said.

“Second, the role was to evaluate the future strategies and plans of the members against those dimensions. Those dimensions are cricket services and their infrastructure – what are the pathways for developing not only players but also coaches and umpires? What is the structure around the professional team performances; the high-performance area? What does their stadium look like? What does their secondary field look like?

“On the commercial and financial side, what do the revenues look like for the future? What are the commercial plans? What kind of support do they have from other stakeholders such as local government? We also looked at the important dimension of transformation, and how they are structured from a governance and administration point of view, as well as the finances of each of the members.”

Ultimately, the new direction is to make every game count and nudge provinces towards smarter recruiting and better, more proactive leadership not fully reliant on handouts.

That kind of ruthless competition and mentality can only be a good thing for the Proteas in the long run. DM