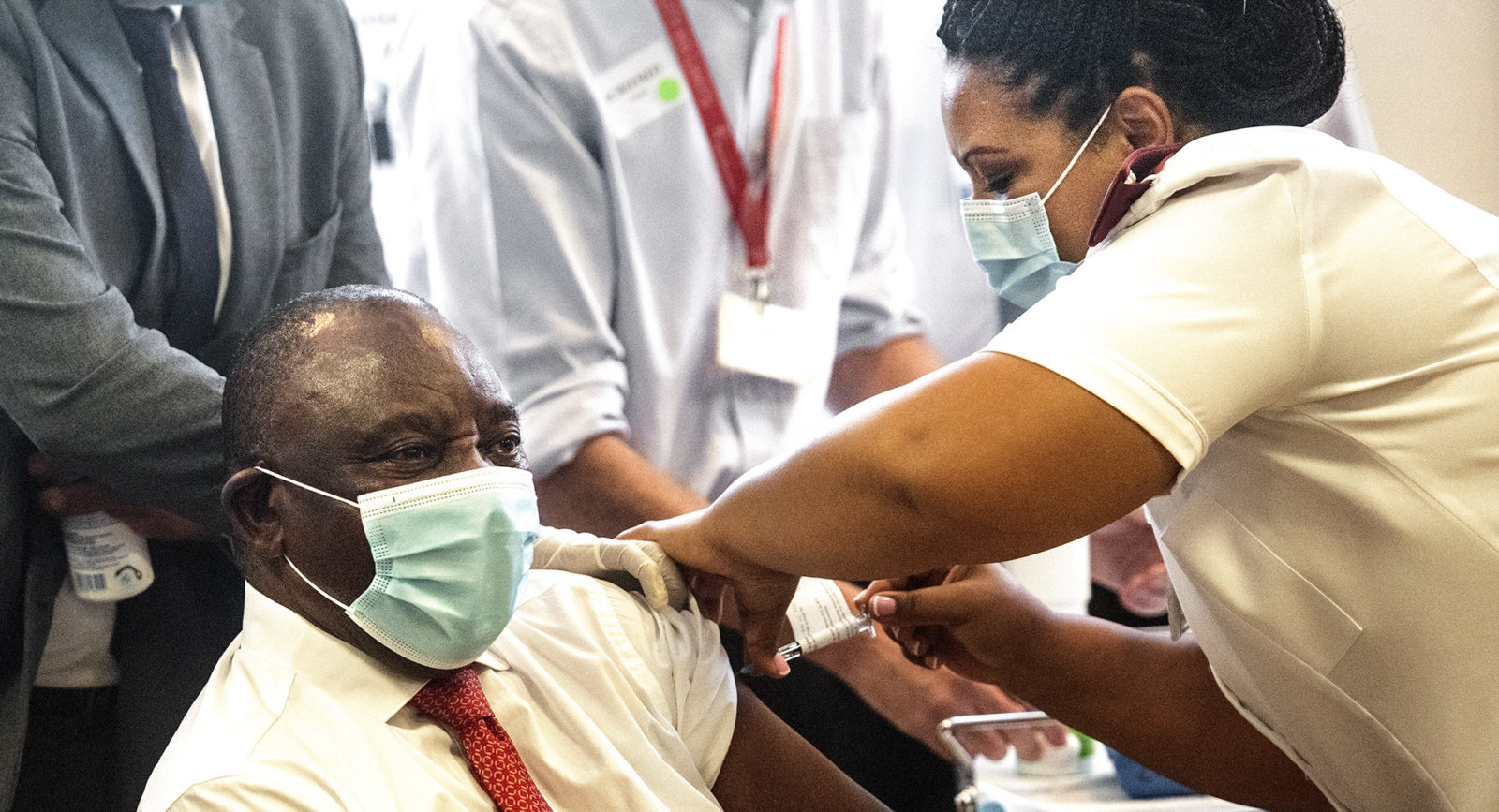 On 17 February Sister Milanie Bennett administered the Johnson & Johnson vaccine to President Cyril Ramaphosa. Spotlight tracked her down to learn more about her long journey to this historical moment.

“Mamma, mamma, you’re famous. I saw you on television!” This was how eight-year-old Noah Bennett greeted his mother, Sister Milanie Bennett, when she arrived home in Brackenfell on Wednesday, 17 February.

Earlier that day, Bennett had watched President Cyril Ramaphosa’s eyes widen as she inserted a needle into his arm at the Khayelitsha District Hospital in Cape Town. In doing so, she set the ball rolling on an implementation study that has so far seen more than 100,000 healthcare workers vaccinated.

“The next day at school Noah read in the newspaper that his mother had made history by vaccinating the president,” Bennett recalls. “When I got home from work, he said to me: ‘Mum, you made it into the history books!’ He was so proud. I think he was the happiest of us all.”

While administering the president’s jab, Bennett had no idea she was making headlines around the world. “I only realised it was being aired live overseas when a friend texted me from Saudi Arabia.”

Remembering the moment, she says, “The president was afraid of the long needle; a lot of people are, especially men. So I saw his eyes widen when I removed the cap of the needle. It’s about two-and-a-half centimetres long.”

Bennett (47) was speaking to Spotlight from the Piekenierskloof Mountain Resort near Citrusdal. Despite her husband, Langley, having whisked her away for a surprise anniversary weekend, she still honoured her commitment to be interviewed. The couple has been married for nine years.

Initially, Bennett was reluctant to speak. “I am a very shy person,” she says. “I don’t like the limelight and don’t like to be praised. It’s my job, which I love. I don’t think it’s something I need to be praised for, you know? But yes, I know that certain things do stand out. Like this.”

While Covid-19 does not fall directly under her jurisdiction, she helped manage Covid-19 beds during the second wave. “Everyone had to pull together,” she says. “It was very difficult.”

Why was she chosen to vaccinate the president?

Bennett laughs. “I was on my way home when the CEO of the hospital called me [to ask] me if I wanted to vaccinate the president. I immediately said: ‘No way! No way, I’m not brave enough.’ But then I thought, it’s the CEO… I can’t really say no. So I said, you know what, no problem. I’ve done the training. I feel confident and competent in my job and would see him as just any other patient I am giving an injection.”

Bennett’s journey with nursing began in the rural Western Cape town of Saron. As a child, she looked after her grandfather, an asthma sufferer, who died of lung cancer.

“My mom was working in Cape Town, also as a nurse. She was a single mother, so we lived with my grandparents. My grandfather was ill from as long as I can remember. I was always the one he would call for at night when he couldn’t breathe, or when he needed his medication. So when I started nursing, I was already very mature. My background was very difficult. I have dealt with difficult situations in my life.”

A future with nursing or psychology

After matriculating at Roodezandt Secondary School in Saron in 1991, Bennett was intent on planning a bright future. “I knew from a young age that I wasn’t going to stay in Saron forever,” she says. “Most of the job opportunities in Saron is to work on a farm, or to work in a factory, or so. I wanted to make something of myself, and of my life. And obviously, I wanted something better for my grandparents. So I knew I had to study. I knew I had to work hard. Besides, I’ve always believed that the world does not owe you anything. So that was my inspiration. I needed to get out of my circumstances. No one else was going to do it for me.”

During a gap year in 1992, Bennett was undecided about whether to study nursing or psychology. Landing a scholarship at the Otto du Plessis Nursing College at Tygerberg Hospital in Bellville decided her fate. She enrolled in 1993.

“When the opportunity came for me to study, I grabbed it with both hands. The bursary included everything: my accommodation, the uniform. There was very little expense for my grandparents. And I’ve never looked back. It’s been 25 years now and I still love nursing like the first day I walked into the classroom,” she says.

After finishing her training, Bennett joined Tygerberg’s staff with a stint at the hospital’s High Care Cardiac Unit. In 2000, she packed her bags to start work at London’s specialist cardiac centre, The Heart Hospital.

“They were recruiting, doing interviews at the V&A Waterfront. I applied for a post, not thinking that I would get one. But I got it, which was really exciting. You know, it was the time sanctions just got lifted and I saw this [as] an opportunity to see the world out there.”

The Heart Hospital in Marylebone is affiliated with the University College of London and the United Kingdom’s National Health Service (NHS). It conducted more than 1,000 heart surgeries a year before being refurbished in 2015.

Bennett relays a stand-out moment: “I think I was about 31 at the time [and] a senior staff nurse, the equivalent of a shift leader here in South Africa. It was a year of bad snow in London and most of my colleagues could not get to the hospital. So I ended up only with two nurses and myself, and I had to manage a busy heart unit with about 20 patients between the three of us,” she recalls.

“This is where my South African experience really kicked in because as South Africans we are used to working under pressure and under difficult circumstances. Basically, I was the one managing the whole ward that day; managing the theatre schedule [and] people coming back from the theatre continuously because we could not stop people that were scheduled for heart surgery. I managed to keep my cool — it wasn’t easy.”

During Bennett’s 10 years at The Heart Hospital, she honed her love for training nurses; she made friends from around the world and travelled plenty. A favourite destination was Belfast. “The Irish people, I find them warmer than the British,” she says. Then there was Spain, Portugal, Thailand and more.

It was during a trip back to South Africa to attend a friend’s wedding in 2008 that she met Langley, an accountant.

But at the time, Bennett was not ready to move back to Cape Town – yet. The next year, at a party in Regent’s Park, she celebrated obtaining her British citizenship. “A very proud moment in my life,” she says.

“Langley and I found ourselves in a difficult situation,” recalls Bennett. “At the time, I wasn’t ready to come home. I loved London so much and I couldn’t see myself living anywhere else. So we were in a long-distance relationship. But in the end, one of us needed to make the decision and it wasn’t going to be him.” Langley is very family-orientated, she says. “So I made the choice to come home. I missed my family a lot too. I mean, you can make so much money; later, that money doesn’t really bring you joy when you are alone and far away from your family.”

Bennett married Langley in 2012. Because of her ingrained self-reliance, initially, she struggled to let him lead, too. “Strangely, when I met my husband, it was difficult sometimes for me to stand back, because taking the lead is just how I grew up,” she says, laughing.

When not in her nursing uniform, she enjoys road trips exploring South Africa’s countryside, shopping and sewing. Recent creations include a Batman costume for Noah.

As a frontline worker, Bennett is waiting her turn to receive a Covid-19 vaccine at the Khayelitsha District Hospital. She says each day the names of healthcare workers to be vaccinated are put forward.

With the media spotlight on her, Bennett would like to leave a message for young people from difficult backgrounds.

“Rise above your circumstances,” she says. “I did, and I don’t regret my humble beginnings for one moment. It made me the person I am. I often joke, saying I was never a child because I had to grow up so quickly. But I don’t regret anything about it. It really moulded me into who I am today.” DM/MC

*This article is published by Spotlight – health journalism in the public interest.