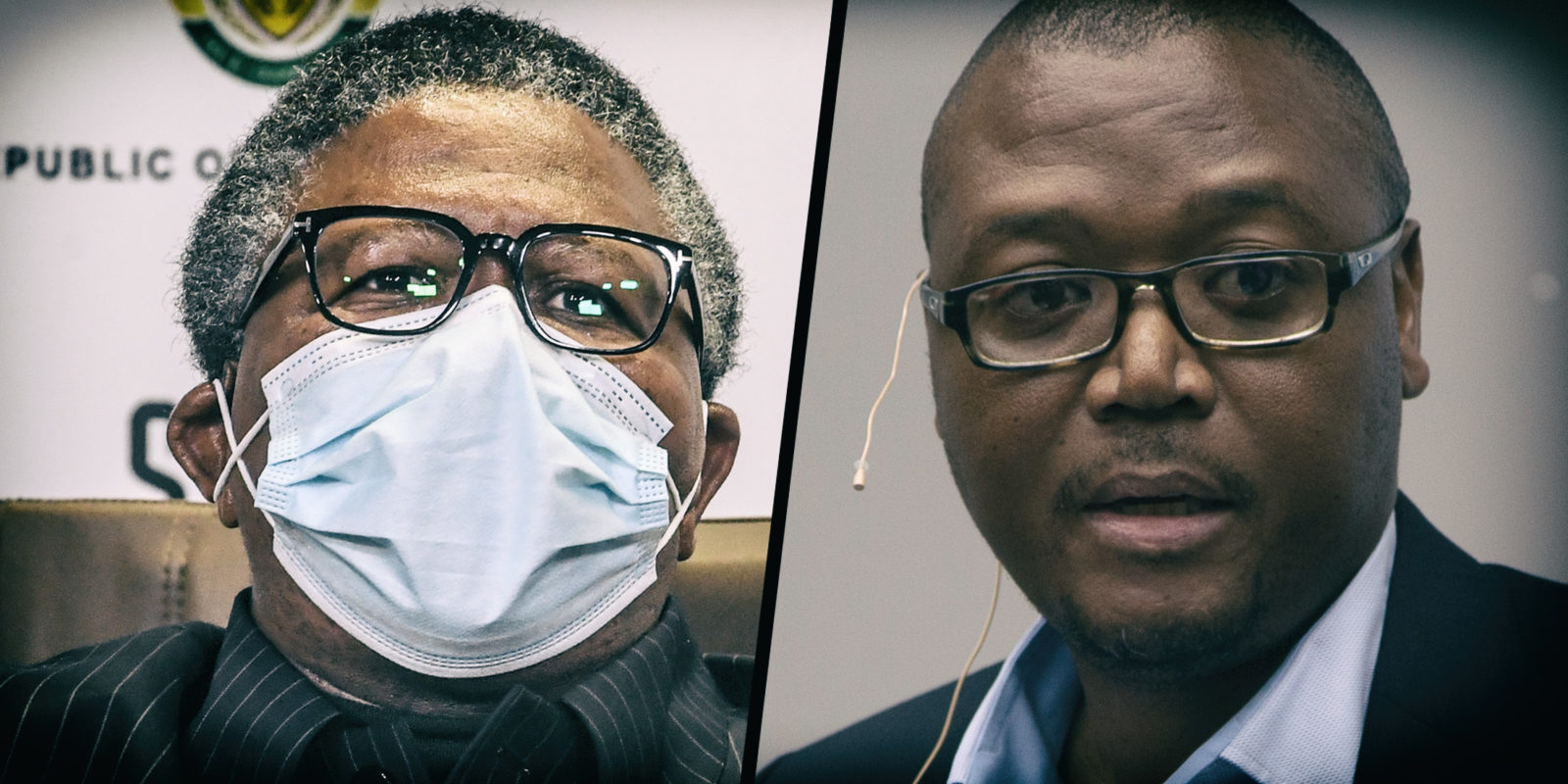 The rail agency has been hollowed out by years of corruption and maladministration. Despite pronouncements on stabilising the ‘broken’ entity the situation only gets worse. Why? A former Prasa legal manager weighs in with a blistering exit letter which puts the blame right at the top.

In a scathing 12-page exit letter, a top Passenger Rail Agency of South Africa (Prasa) lawyer, Fani Dingiswayo, has accused the agency’s former and current leadership of paying lip service to the fight against corruption while in practice sidelining those who have kept the company from imploding.

Dingiswayo’s letter implored the current board to call to account those who made “disastrous” and “reckless” decisions which contributed to Prasa’s destruction – among whom he includes the former interim board led by Khanyisile Kweyama, former administrator Bongisizwe Mpondo, and Thandeka Mabija, who headed Prasa after Mpondo.

His letter is notable both for its scathing tone and his description of how his warnings related to Prasa’s security contracts and unlawful staff dismissals were repeatedly ignored.

Lending weight to his allegations, 10 Prasa executives have been dismissed since Dingiswayo penned his letter, dated 15 January. Four of the executives responded with urgent Labour Court challenges which saw their dismissals set aside in two separate judgments.

Ironically, this purge appears to have been driven by the very board to whom Dingiswayo appealed.

Dingiswayo, who is now a partner at international law firm Baker McKenzie, was appointed as general manager for legal services at Prasa in 2013. He resigned not long after the appointment of Mabija as the acting chief executive in October last year.

He was briefly fired himself in May 2015, then hastily reinstated a week later.

AmaBhungane has seen his exit letter, circulated to top officials at Prasa and the board, in which he asserted that “a governance disease that masked itself in the name of corruption busting” is the cause of the sorry state of the rail agency.

An example of “corruption busting” that had the effect of crippling Prasa is how the interim board and Mpondo handled the termination of irregular security contracts.

Former Public Protector Thuli Madonsela had identified a suite of security contracts as problematic in a 2015 report.

Four years later, in October 2019, Prasa’s interim board terminated all of its security contracts without a contingency plan, despite the history of theft and vandalism on Prasa’s railway network.

The result: the infrastructure was compromised.

In his letter, Dingiswayo complained that, though the terminations might have appeared laudable, “the challenge was that they did so without a care for implications of this decision on the network of Prasa.

“Advice that sought to show that this decision was calamitous to the interests of Prasa fell onto ears that were committed to their course of action whatever the cost. That was the beginning of the destruction of the network,” he wrote.

In February 2020 the head of legal and risk, Martha Ngoye, explained to Parliament’s Standing Committee on Public Accounts (Scopa) that the legal team had raised concerns about cancelling the security contracts and even proposed an alternative process but was ignored.

Ngoye, widely regarded as a true corruption-buster, was among the executives fired at the end of January and reinstated by the Labour Court. Despite a scathing ruling, Prasa has announced it intends to appeal.

In his letter, Dingiswayo described the performance of the interim Kweyama board, which was installed in 2018, as “abysmal”.

But what came next was no better.

He noted that newly appointed Minister of Transport, Fikile Mbalula, on 9 December 2019 dissolved the interim board and appointed someone whom he called an “administrator”.

“Those who understand the law and dealing with troubled organisations… knew that this decision was unlawful and had no prospects of saving Prasa,” Dingiswayo wrote in his exit appraisal.

Prasa’s legal team and others had warned that Mbalula’s actions were unlawful and in August last year the Western Cape High Court agreed.

Mpondo departed – but Dingiswayo was scathing about his legacy. He wrote:

The “pandemic” that is the bad leadership of the Kweyama Board and the administrator has left Prasa with:

When contacted by amaBhungane, Mpondo refused to comment, saying “it’s between Fani and Prasa”. Kweyama also did not respond to questions.

What was remarkable about the handling of the security contracts was that Prasa managed to make the same mistake twice.

In February 2020, Mpondo told Scopa that the interim board’s decision to terminate the security contracts at Prasa without a contingency plan was questionable and had “disastrous consequences”.

But, Dingiswayo wrote, Mpondo went on to make the same decision.

“The Administrator did exactly what he criticised the Kweyama Board for: terminating the security contracts without a workable contingency plan, leading to the wholesale damage to the network and deepening a crisis that was already unaffordable.”

A number of Prasa’s stations and lines were rendered unusable as a result of the theft and vandalism which escalated to unprecedented levels under lockdown when Prasa had little or no security in place.

In addition, Dingiswayo accused Mpondo of a dismal human resources record, including:

Dingiswayo also blamed Mabija, the acting chief executive who succeeded Mpondo: “All these things, particularly the Human Capital Management (HCM) gaffes, happened under the watchful eye of [Mabija] in her [then] position as Group Executive: HCM.”

He has further criticism of her, based on an amaBhungane report that, a day before the court set aside Mpondo’s appointment, Prasa quickly added him to its payroll and wired him a lump sum salary of R3.17-million in back pay.

“If it is true that the Administrator was abruptly placed on the Prasa payroll and abruptly paid by Prasa, this is highly irregular as a seconded employee is paid by the seconding entity and not by the entity that s/he was seconded to,” said Dingiswayo, pointing out this happened under Mabija’s watch.

One of the first decisions it took was to appoint Mabija as the acting group chief executive.

Dingiswayo was scathing: “What the Board took into account as to how this decision would be in the best interests of Prasa is unknown to me… To people like me who believe that [Mabija] has a lot to answer for, the appointment does not inspire us with confidence,” he wrote.

In contrast to what appears to be a complacent approach to holding people who precipitated the demise of Prasa to account, Dingiswayo said various ministers and leaders ignored or abused “the people holding the broken pieces of Prasa together”.

“There is no gainsaying that Prasa is a broken entity,” he wrote.

“The questions that leaders to date have avoided like the plague is why has the organisation not imploded. Put differently, who is holding the broken pieces of Prasa together?

Dingiswayo said such committed employees were everywhere in the organisation.

“They approach their work as a form of service and self-abnegation. They are at all levels of the organisation: from highly skilled professionals… all the way to unskilled labourers. They are united by their unreserved love for the railways in general and for Prasa in particular.”

“In instances that are too many for comfort, the people holding the broken pieces of Prasa together are hounded like prey with the sole intention of driving them out of the organisation,” he said.

In his exit letter, Dingiswayo expressed scepticism about change for the better.

“As far as I am aware, the board has not said anything about going after those whose decisions led to the wholesale destruction of Prasa property,” he said.

“The other pressing issue is the urgent restoration of commuter operations. This does not require press announcements that were pursued by the Administrator in order to eclipse the appearance of Prasa at the State Capture Commission; it requires deliberate action, a clean procurement of professionals and contractors with the ability to restore the commuter operations as soon as is humanly possible.”

The signs are not auspicious.

In overturning the dismissal of three executives recently, acting Labour Court Judge Moses Baloyi said it appeared from the evidence that the unfounded terminations were initiated by the board.

Baloyi noted: “There is sufficient course for this court to make an order of costs against [Prasa] in view of their conduct.”

He said the dismissed executives had repeatedly pointed out the facts to Mabija and the board, but had been ignored. Prasa had claimed they were all on fixed five-year contracts which they had already exceeded.

Judge Baloyi dismissed this claim as wholly unsupported and noted that Prasa had not denied the allegation that at a meeting in 2020 the director-general in Mbalula’s department had openly said that Prasa “was well-resourced to out-litigate any employee challenging their unlawful terminations”.

Questions sent to Prasa, in which Mabija was copied, were unanswered by the time of publishing and the story will be updated if and when answers are received. DM

Meanwhile, the latest attempt to stabilise Prasa’s leadership problem was almost derailed when it emerged that Prasa’s incoming chief executive, Zolani Matthews, was older than the agency’s official retirement age.

Matthews is Prasa’s first permanent CEO since 2015, a period in which the agency has endured 10 CEOs.

In 2018, GroundUp reported on the strange circumstances surrounding former acting chief executive Cromet Molepo, who, at 62, was promoted against advice and made to retire after just 73 days in the apex role at the rail agency.

But on Monday Mbalula, speaking at a media briefing in Langa, Cape Town, made light of Matthews being at pensionable age, saying he looked considerably younger. “So, you are debating his age? It’s fine, even me, he shocked me that he is 64.”

Board director advocate Smanga Sethene went on to explain that Prasa’s recruitment and selection policy does not prescribe an age restriction for any position of employment at the agency nor does the Legal Succession Act, which governs Prasa.

“Termination policy of Prasa relates to persons who are permanently employed at Prasa, not persons that are not in the employ of Prasa.”

Prasa policy provides for employees to remain in service after attaining the age of 63 on a contract basis, “provided that the operational needs of the Company require that an employee’s services be retained”. DM