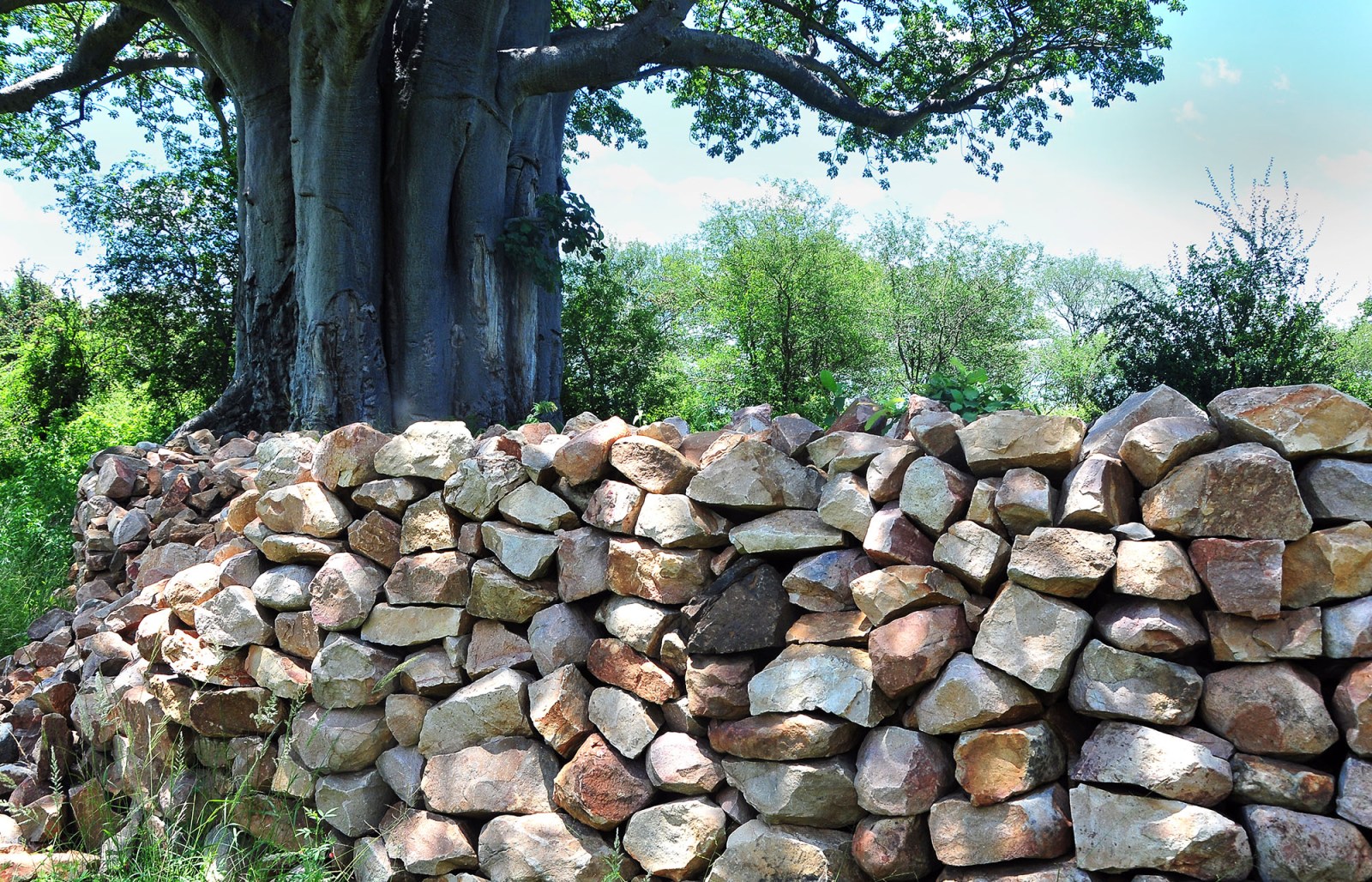 The Thulamela stone wall and ruins offer so much, yet so little, in terms of the past. (Photo: Lucas Ledwaba / Mukurukuru Media)

Thulamela, an archaeological site with links to Mapungubwe and Great Zimbabwe is set to join the list of national heritage sites.

A female kudu stopped in her tracks about 200m away from where we stood in the shade of a gigantic baobab tree to eavesdrop on our conversation about life at Thulamela 400 years ago.

She hung around for a few seconds, eyeing us curiously across the spectacular stone wall formations that bedeck the hill.

When I whispered about her presence to my two SA National Parks (SANParks) hosts, guide Daniel Shibambu and ranger Phathutshedzo Maluta – who had their backs to the antelope – she turned and bolted, disappearing behind one of the stone walls.

We were up on the hill at the Thulamela heritage site in the Kruger National Park, which experts link to the ancient kingdoms of Mapungubwe and Great Zimbabwe that thrived during different periods between the years 1075 and 1650.

It felt surreal to be standing in the shade of a tree where, more than four centuries ago, descendants of one of Southern Africa’s earliest recorded civilisations had probably sat or stood just like us, discussing all kinds of matters under the Southern African sun.

“You are the first visitor since the lockdown,” Shibambu had told me earlier while we made the 600m ascent up the hill towards the ancient settlement.

Some years earlier my initial attempt to reach Thulamela had ended in disappointment – all because of my spontaneous ways.

I had decided one morning after an overnight in Giyani to drive to the Kruger’s Punda Maria gate hoping to spend a day walking in the footsteps of the people who once inhabited the ancient settlement.

I was later sobered by the reality that one needs to book at least two days in advance for the tour. And it now makes a lot of sense. But I finally made it last month to fulfill my obsession with the secrets hidden in ruins.

Under the cool shade of the massive baobab, Shibambu passed down some of the information revealed by the excavations of the site that began in 1991. The site was discovered by a ranger on foot patrol back in 1983 – who then informed his superiors.

Shibambu explained that Thulamela is a late Iron Age site that forms part of the Zimbabwe culture believed to have started at Mapungubwe around 1075. Its inhabitants, believed to be from the vhaNyai division of the Shona people, who spoke a dialect known as Lembethu, were part of a trade network that extended through the interior of the continent to include Botswana, Zambia, Zimbabwe and central Africa.

Excavations at the site revealed glass beads, cloth and glazed ceramics, which point to trade relations between Muslim traders who facilitated the movement of goods from the Middle East, India, South East Asia and China. Among the prized items of trade during that period were ivory and gold.

The evidence uncovered at sites like Thulamela, Mapungubwe and Great Zimbabwe is crucial in rewriting Africa’s history, in dispelling the long-held lie that this great continent was populated by a backward, unsophisticated people who only got woke after the arrival of European settlers in the 1600s.

It is believed that Mapungubwe’s decline coincided with the increase of Great Zimbabwe’s importance and, when Great Zimbabwe itself was abandoned about 300 years later, several groups moved south across the Limpopo river into the northeastern areas of present-day South Africa and established new smaller chiefdoms such as Thulamela.

SANParks says there are about 280 archaeological sites in the Kruger National Park. But only three of these, Masorini, the Joao Albasini ruins and Thulamela, are open to the public.

Spokesman Thabo Kgomommu said they were finalising plans to open a few more such sites, including Mount Tshikumbu, the Mopani petroglyphs and Gumbandevu Hill, among others.

He warned that excavations of archaeological sites depended on researchers and the research questions they wanted to answer. “They then apply to SANParks and Sahra [the South African Heritage Resources Agency] and once the application is approved they can continue. Not all archaeological sites will be of interest to the public,” he said.

We walked among the enclosures encircled by the neatly stacked rocks, which were restored after the discovery of the site. The walk revealed interesting insights into the social make-up of the community, central to which was the Khosi, a mystical figure who was rarely seen by commoners.

Excavations at the site led to the discovery of two skeletons, believed to be of royals who once reigned over the land. The neatly preserved skeletons were removed from the site for DNA sampling after getting the nod from members of the Makhahane clan, believed to be descendants of the Thulamela people.

The tests completed, the remains were reburied after sacred rites were conducted, led by the Makhahane healers and spiritualists who are now scattered across villages in the Thulamela local municipality in far northeastern Limpopo.

Kgomommu said SANParks had nominated Thulamela as a national heritage site and had engaged Sahra on the matter. He explained, though, that Thulamela on its own would not meet the criteria of a world heritage site like Mapungubwe and Great Zimbabwe.

“It can stand a chance as a serial nomination in a series that can link it up to Great Zimbabwe, Mapungubwe and a few others. It is something that can be explored in the future,” he said.

He said they planned to introduce boardwalks, viewing decks and interpretative boards at Thulamela in the future “when resources permit”.

Although tourists may certainly do with the comfort of viewing decks in future, it is clear the people of Thulamela did not require such. The hilltop offers panoramic views of the land below, of open grasslands where they planted various kinds of pumpkin, millet and sorghum.

Standing atop the hill from the enclosure believed to have been occupied by the Khosi, one can see, to the northeast, the earth-brown waters of the Luvuvhu River cutting through the green vegetation like a trickle of coffee. We may never know or understand why the people of Thulamela abandoned such beauty from Mother Nature.

That night, back in the soothing solitude of my lodgings at Punda Maria and as sleep began to caress my tired bones and muscles, my mind battled with the difficult questions that ruins always evoke.

Why did the people of Thulamela abandon their village? Who was the last person to leave the settlement those 400 years ago when the inhabitants abandoned Thulamela? Why were they the last person? Which way did they go, and why?

In the documentary Great Zimbabwe and the First Cities of Southern Africa by Magellan TV, the narrator makes the point that European settlers assumed Africa had no history when they could find no written accounts of its past.

Truth is, though, that Africa’s history of civilisation and interaction with the world is written in the stone walls of Mapungubwe, Great Zimbabwe, Thulamela and many other such ancient settlements. DM168