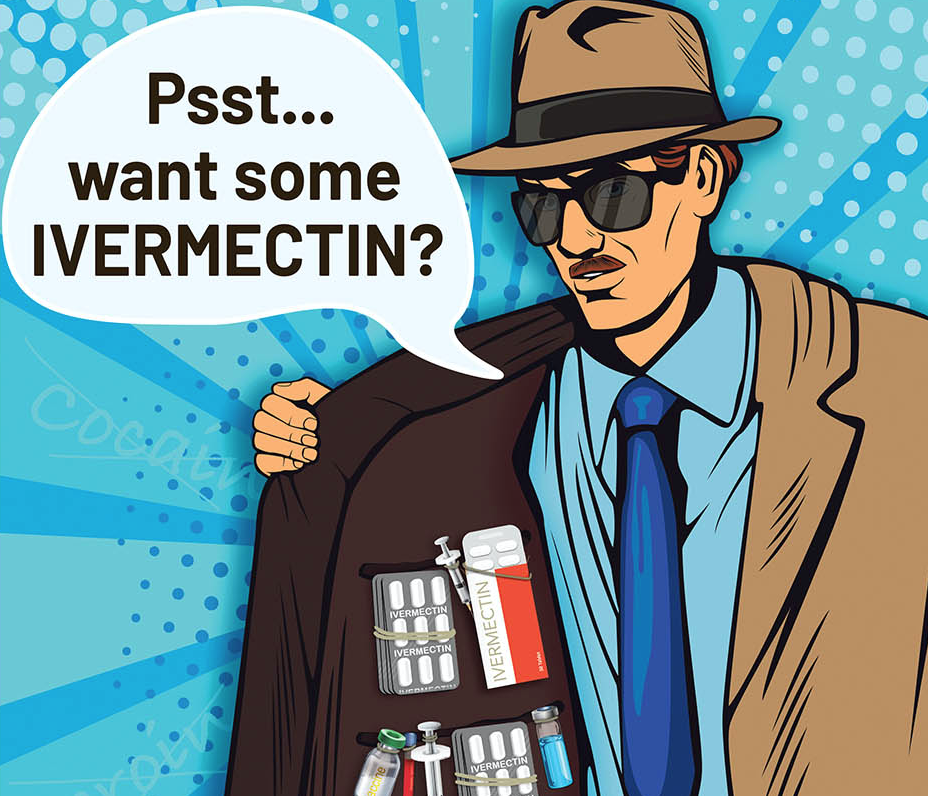 The extent of the burgeoning Covid-19 black market is becoming apparent, with nearly six million ivermectin tablets intercepted in South Africa in nearly six weeks and police crackdowns showing just how tightly this country has merged with global criminal networks cashing in on the pandemic.

Issues relating to ivermectin have been raised in the runup to Interpol’s announcement this week that there were major busts of criminals peddling fake Covid-19 vaccines and masks in countries including South Africa and China.

Based on the quantity of intercepted ivermectin as recorded by the South African Health Products Regulatory Authority (Sahpra), DM168 calculates that on average nearly a million tablets are being pumped into South Africa each week. A single tablet, the Ministerial Advisory Committee on Covid-19 has found, can sell for at least R500.

Locally, there have been reports of the medicine being administered to people although it is intended to treat parasites in animals. Ivermectin is not registered for human use in South Africa and is the focus of intense debate as well as court action about its accessibility, and whether it could successfully treat Covid-19.

At present, it may only be used under urgent circumstances, and as part of a “controlled compassionate use” programme, while approval from Sahpra is awaited.

Yet there are reports that this is being totally disregarded. There are fears that people desperate to treat Covid-19 are risking their health by taking it on the sly. This is where crooks cash in.

The busts link South Africa to states including India, Dubai, China and Zambia, showing that criminals have used the Covid-19 pandemic to entrench their international networks.

As in global drug dealing and gold-smuggling channels – which DM168 has previously reported on – South Africa is now also a key cog in the criminal side of Covid-19 matters.

In a statement, Interpol said in one crackdown, the date of which was not specified, “some 400 ampoules – equivalent to around 2,400 doses – containing [a] fake vaccine were found at a warehouse in Germiston, Gauteng, where officers also recovered a large quantity of fake 3M masks and arrested three Chinese nationals and a Zambian national.”

Meanwhile, officers in China may have cracked the backbone of a network selling fake Covid-19 vaccines. A raid at a manufacturing site led to about 80 arrests and 3,000 counterfeit vaccines being confiscated.

Interpol Secretary-General Jürgen Stock welcomed the arrests but warned: “This is only the tip of the iceberg when it comes to Covid-19 vaccine related crime.”

Aside from the illegal trade in knockoff medicine and masks, ivermectin has been flagged in South Africa as a substance being smuggled into the country and being misused.

Police have issued statements saying that, according to a section of the Medicines and Related Substances Act, anyone wanting to import medicine into the country needed written authorisation from Sahpra. It is illegal to use medicines not approved by Sahpra.

This week Sahpra told DM168 that it had recorded eight instances of ivermectin being intercepted as it arrived in South Africa over nearly six weeks, from the second week of January to mid-February.

The total number of tablets seized over this period was just short of six million – 5,816,951.

Sahpra spokesperson Yuven Gounden said that, in addition to these cases, it was conducting several other probes.

“[We are] currently investigating a veterinary pharmacy in Gauteng that is also alleged to sell ivermectin injections meant for animal use to humans for oral consumption as prophylactic treatment for Covid-19,” he said.

“Other cases involve a farmer in the Western Cape who was also orally administering to his workers ivermectin [meant] for animal use. The case is ongoing … Law enforcement officials have been notified in some of these [cases] and are working with Sahpra to ensure that criminal activities be dealt with”.

Sahpra was having to keep an eye on social media after it was alerted to advertisements on Facebook relating to Covid-19 treatment.

There had also been investigations into, and inspections of, pharmacies allegedly supplying ivermectin to customers without Sahpra approval. It is understood ivermectin tablets are taken over several days to try to treat Covid; there is not necessarily a once-off dosage.

It says: “Ivermectin is registered in South Africa for the treatment of parasites in animals under the Fertilizers, Farm Feeds, Agricultural Remedies and Stock Remedies Act…

“The unregulated distribution of the drug can lead to sub-standard and falsified products that are harmful to human health.”

In January, the Ministerial Advisory Committee on Covid-19 said there had been “reports of apparent toxicity from overdoses of ivermectin”.

“Although portrayed as safe, ivermectin is associated with a range of adverse effects when used in its registered indications in humans.”

The Witness had reported that two people in Pietermaritzburg ended up in intensive care after overdosing on ivermectin last year.

A Health Department summary on ivermectin from December said side effects of its use included dizziness, diarrhoea, abdominal pain, and nausea.

The advisory committee was worried about reports of profiteering relating to the sale of unlicenced products purporting to contain ivermectin. “Unregulated distribution channels are at risk of the introduction of sub-standard and falsified products, which can be deleterious to human health,” it said.

Police in South Africa have been working with Interpol, Sahpra and other agencies to try to clamp down on the illegal distribution of ivermectin. About two weeks ago police announced officers had seized about R126-million’s worth of unregistered medicines at OR Tambo.

“The unregistered medicines, which are believed to be ivermectin, were mainly found to be in tablet form. The discovery of the tablets was made … during an inspection of a cargo container that was destined to South Africa from India,” police spokesperson Colonel Athlenda Mathe said. “Authorities found that the company that had imported the medicines into the country had done so without the necessary written approval and authorisation from the regulatory authority.”

No arrests were made, and police were “working with authorities from India to establish the exact delivery address of the consignment in the country.”

At the end of January police announced that together with Sahpra and customs officials, it had seized more than R6-million’s worth of tablets believed to be ivermectin over two weeks and had arrested six suspects, all of whom had entered South Africa from India.

Mathe said it was suspected the tablets had been imported to be sold for treating Covid-19.

Earlier in January police announced that a traveller who had flown in from Dubai and landed at King Shaka International Airport was arrested after 2,462 tablets, worth about R100,000, were discovered in his hand luggage. He was charged with possession of unregistered medicines and importing medicines without a valid permit.

Most of the ivermectin confiscated during police operations in South Africa, so far, is linked to India.

Last month, a preliminary study conducted by the Soweto Clinical Trials Centre found that of five different tablet formulations of sourced ivermectin, none was Sahpra-registered.

“Eighty percent of the tablets tested in this study contained undeclared medical compounds that are unknown to the prescriber, with potential concerns for patient safety,” it said.

The study further found that all the tablets labelled as having been manufactured in India contained at least one undeclared active pharmaceutical ingredient.

In July last year, The Times of India reported that police had cracked down on two international networks that were smuggling medicines out of that country.

“The drugs include medicines used for treatment of Covid patients and were being illegally exported from India. These medicines are in short supply,” an official, Inderjeet Yadav, was quoted as saying.

At roughly the same time as these clampdowns, Ghada Waly, the executive director of the United Nations Office on Drugs and Crime (UNODC), said: “Transnational organised crime groups take advantage of gaps in national regulation and oversight to peddle substandard and falsified medical products.”

In December last year, after Interpol had issued a global alert to its 194 member countries (of which South Africa is one), warning that organised crime networks would target Covid-19 vaccines, the UNODC also raised a red flag.

“There are corruption risks throughout the entire vaccine deployment process. As an example, vaccines may be stolen from the public supply chain during the transportation process and diverted to the black market or kept for personal use,” it said in a report related to Covid-19 risks. DM168