How social media apps can be a platform for TikTox-icity 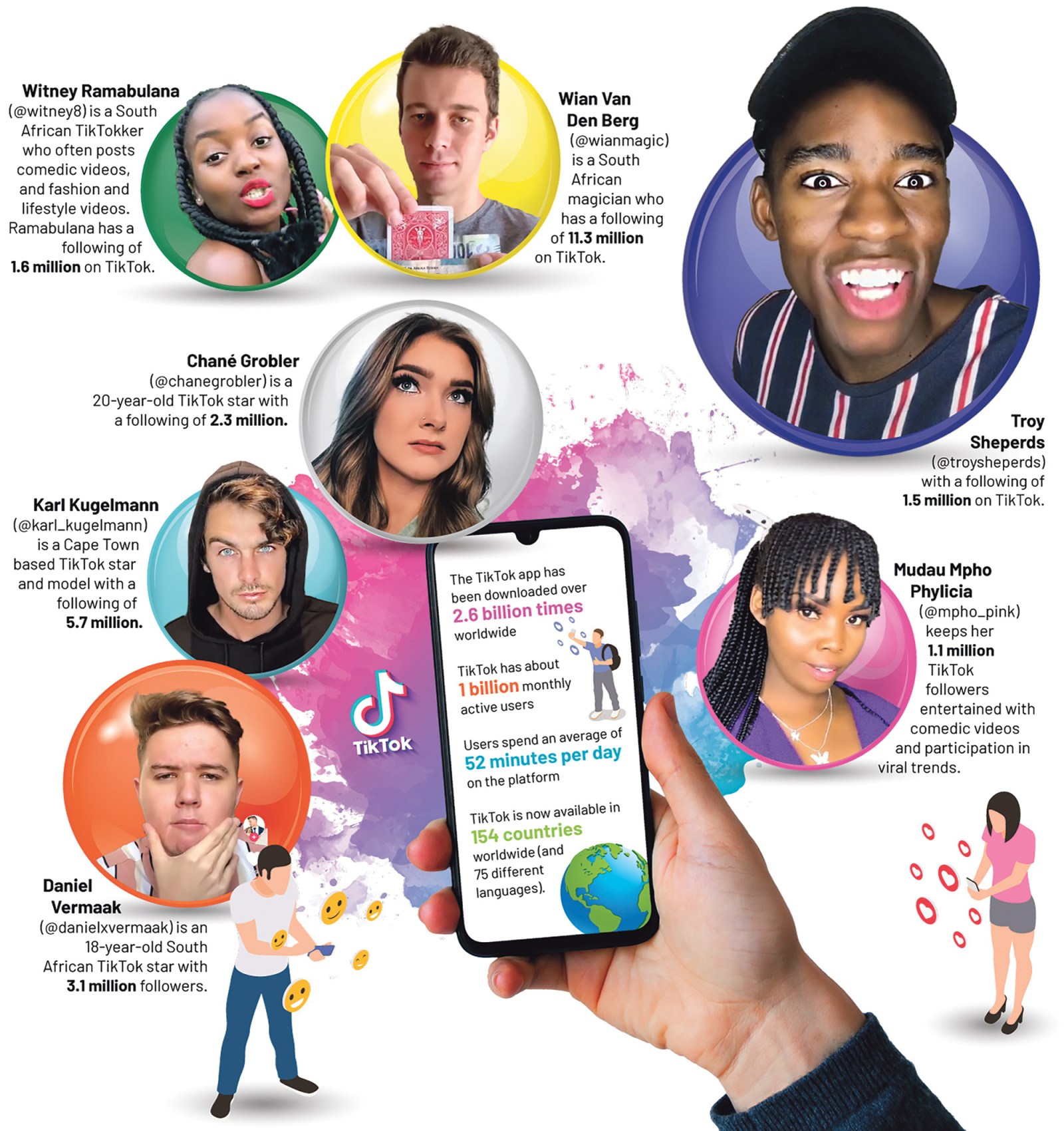 The video app is popular with youngsters looking for fun films, but can be a vehicle for ‘outrage marketing’

A TikTok star in South Africa who goes by the name Troy Sheperds is used to making his 1.5 million followers laugh with his playful skits, but a fortnight ago his video poking fun at feminists pushed things too far for many of his fans.

In his video, Things that feminists do that annoy me, Sheperds starts off by saying: “When they say men are trash and then go on this huge rant about [how] ‘my mom’s such a bitch, but thank God I have my dad around, but men are trash’.”

“The whole hating white males, I never understood it. Oh my gosh, shut the f**k up, Bradley, you have [white male] privilege and you’ve been benefiting from society ever since you were tiny,” added Sheperds, who, incidentally, is black.

Speaking in a high-pitched voice supposedly imitating the feminists who annoy him so much, Sheperds also talks about toxic masculinity. “Last night, my brother fought with his best friend and instead of hugging it out, they did a fist bump. That’s toxic masculinity,” he said.

Critics were quick to climb in, as is the nature of social media banter and instant responses. Girls Against Oppression, a feminist South African Instagram account, said: “We take offence to the fact that he has chosen to be ignorant of the mass trauma individuals who face gender-based violence (GBV) in this country are subjected to. [Sheperds] said he was tired of hearing ‘toxic masculinity’ and ‘men are trash’, well Troy I have some news for you, women in South Africa are tired of being raped, killed, assaulted and being murdered. Next time, before making such poor remarks, do your research.”

Another critic was YouTuber Thando Mbhele, who described Sheperds’ video as “ignorant” in his own video. In Shepherds’ comments on #MenAreTrash, he ignored how men were often complicit in the violent and sexist ways men treated women, said Mbhele.

“What makes this worse is that the struggles of women in South Africa have been documented, and yet people still choose ignorance,” Mbhele said in his video.

On his TikTok page, many users called Sheperds out for undermining efforts against GBV. In response, he repeatedly denied any wrongdoing. “I’m not belittling GBV. Nor would I ever. I am not being ignorant. I want to know where I went wrong. What did I say or do in this video?” he replied to one of the TikTok comments.

With the rise of the teenage influencer on TikTok, it’s hard to tell whether Sheperds, who has said in podcast interviews that he’s interested in building his brand beyond TikTok, was using what marketing specialists call “outrage marketing”, said Nqobile Bundwini, a marketing lecturer at the University of Cape Town. Outrage marketing is designed to drive up sales of a product or service or engagement on social media by saying something outrageous. It worked because it generated media and public attention, said Bundwini. “Even when we’re baited, we can’t help but feel emotional. What this tactic does is it mobilises critics and those who are loyal,” said Bundwini. Although outrage marketing was high-risk, for some people and brands it did little harm to them, said Bundwini.

Regardless of Sheperds’ motivation, his video did not negatively impact his following and he didn’t lose any of his 1.5 million followers. He posts mainly in English, but it is interspersed with some Setswana.

He posted his first TikTok video in 2019.

His fame on the social media platform is indicative of its broader popularity, which had a huge increase in downloads during lockdown – particularly among the young. Globally, the app, which is owned by the Chinese company ByteDance, and which was launched in 2016, has 800 million users and 6 million users in South Africa.

Dinesh Balliah, a South Africa journalism and media educator, says TikTok’s core audience is “generally younger, with ages ranging between 16 and 40, although TikTok’s terms of service suggest that users can be as young as 13. Influencer culture is quite trendy right now with many users of platforms like Instagram and TikTok seeing these spaces as opportunities for popularity or celebritydom.”

Sheperds’ traction appears to be a result of his relatability. Sheperds, who said in a podcast interview that he’s studying Dramatic Arts, has done skits making fun of students in class and how boys react after getting dumped at a movie.

He did not respond to repeated requests for an interview.

Priscilla Boshoff, a media studies lecturer at Rhodes University, said that for many young people, TikTok was about “having fun, showing off your talent, whether it’s singing, dancing or playing an instrument”.

But TikTok’s appeal for many young people, looking to become famous and to make money while they’re at it, lies in the way it allows stars to make money from the app.

On platforms such as Twitter, YouTube and Instagram, users with huge followings often make money from doing brand campaigns and not necessarily from the app; TikTok subverts this by allowing TikTok users to send money directly to TikTok stars.

In a podcast interview last year, Sheperds said many TikTokkers, including himself, made money this way.

Users buy something called ‘coins’ and then, once the TikTok creator goes on TikTok live, those coins are sent to the star by users. TikTok took 50%of these coins, said Sheperds.

Once the TikTok star receives those coins, they can be turned into “diamonds”, which can be converted into cash via PayPal.

What does Sheperds’ video tell us?

But what does Sheperds’ video – which misunderstands toxic masculinity, power relations and white male privilege in a country that has rampant gender-based violence – say about TikTok?

Videos like Sheperds’ needed to be understood in the context of South Africa’s contested gender terrain, Boshoff said. “We have a Constitution that ensures women’s rights but we also have this aggressive patriarchy,” she added.

Boshoff said TikTok seemed to be more lighthearted than other social media apps.

“Looking at Sheperds’ [social media] page, you can tell that he’s out to have a laugh at social norms. The joking can be powerful if it tackles social injustice and makes the social injustice visible, but laughter also has the effect of trivialising genuine anger at a problem, so it’s like a two-edged sword,” said Boshoff.

And like all social media platforms, racism is often on display. Last year, two white high school students in the US were expelled for making a racist video. In the original video, the teens poured cups of water on to a piece of paper labelled with the n-word as “ingredients” to make a black person; the cups were labelled “going to jail” “not having a dad” and “robbing people”.

Like any social media platform, there was going to be good and bad, said Sarah Hoffman, the director of Clickd, a digital law company.

“But TikTok can [be] and has been used for good. There are the teenagers who reserved tickets for [Donald] Trump’s rally with the intention of not going. There’s also lots of body positivity content which I’m hoping makes an impact on teenagers,” said Hoffman. Sheperds posted another video this week defending his Annoying things feminists say.

His video “wasn’t about all feminists,” but rather about “some feminists” who misuse phrases like toxic masculinity and #MenAreTrash, he said. “Obviously, not every feminist misuses those words in that way, but there are people who claim that they’re feminists and misuse those words and that video was aimed at them,” said Sheperds. He also denied making jokes about gender-based violence.

“I never made jokes about GBV, people took it out of context and said that I said that, but I didn’t.”

At the time of publication, Annoying things feminists say had recorded 317,000 views. DM168