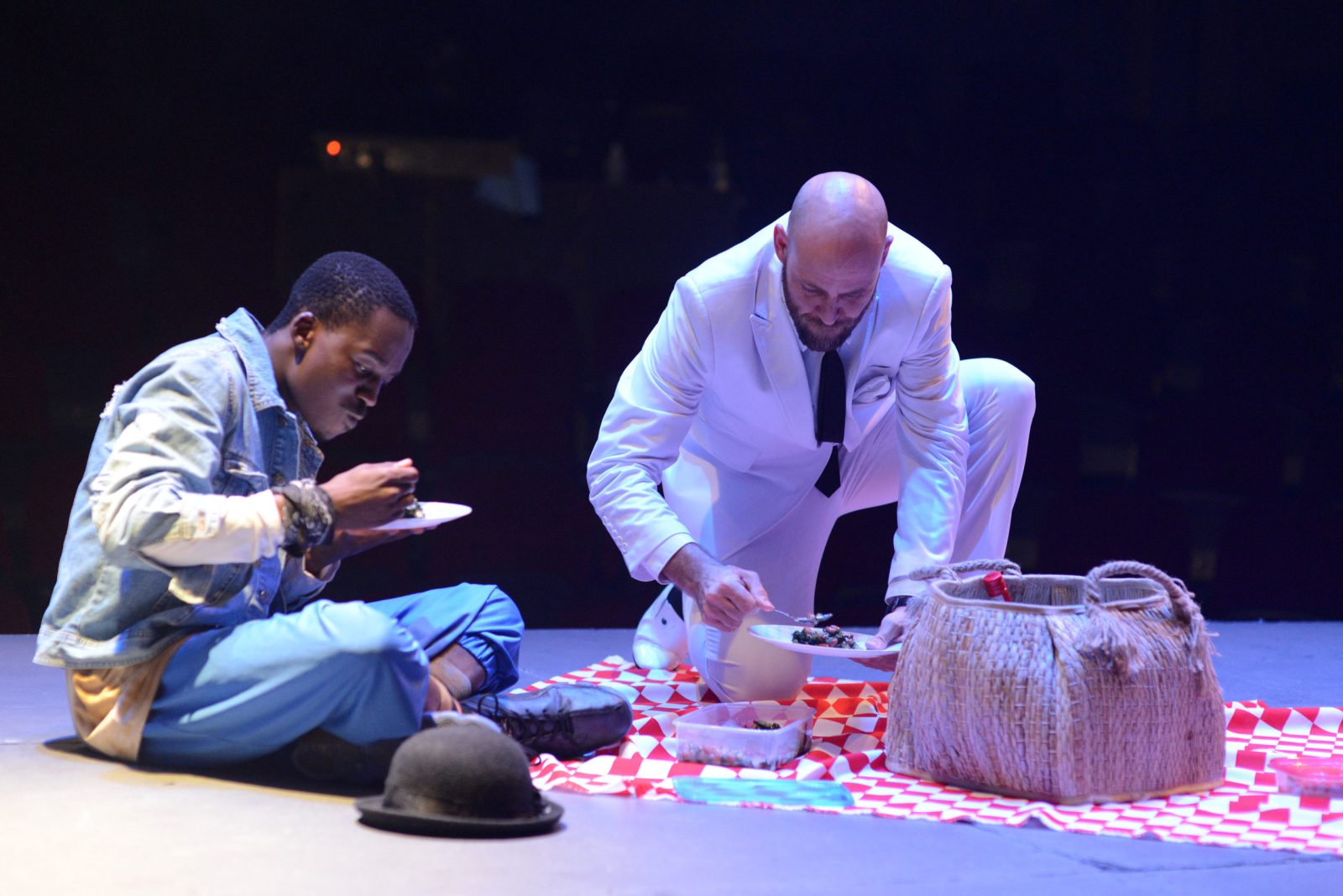 In honour of Black History Month in the US, the Market Theatre in Johannesburg is staging Antoinette Nwandu’s ‘Pass Over’.

Every year, Johannesburg’s Market Theatre stages one Afro-American play to celebrate Black History Month. But this year, the play wasn’t about an imaginary intellectual debate between Martin Luther King and Malcolm X; in 2021, as the streets are doused with the blood of Trayvon Martin and Eric Garner, just two of the many black men killed by US policemen, the play is about police brutality and the despair facing poor, unemployed and homeless black men.

Pass Over, which was first performed by Chicago’s Steppenwolf Theatre Company in 2017 and then adapted for film by Danya Taymor and Spike Lee, was written by Harvard graduate Antoinette Nwandu and is a powerful piece of theatre featuring delightful actors.

The play was partly inspired by the shooting of 17-year-old Trayvon, and its style was influenced by Samuel Beckett’s absurdist play Waiting for Godot, whose characters Vladimir and Estragon endlessly debate things that will never happen and a future that will never come.

In Pass Over, Kitch (Hungani Ndlovu) and Moses (Khathu Ramabulana) live under a lamppost in the ghetto. There’s a lovely rapport between them, although part of their dialogue sometimes disappears, when they turn their backs to the audience, making it harder for them to catch every word they say.

Moses and Kitch dream of getting off the streets, out of the ghetto and into a better place – the Promised Land of milk and honey, caviar and sexy honeys. Their moods range from jocularity to despondency, with anger and fear mixed in, a routine day in the life of black men in America, where undisguised racism is ubiquitous. At times, their light-hearted banter or fanciful dreams of a better life are interrupted by gunshots, which make the audience jump.

Moses talks about rising to his full potential and moving on to a better life. Eventually, he suspects that the only way to do so will be through death, since earthly life is an endless cycle of struggle for survival. “The police are out here doing what they do – killing N****, mostly,” he says.

Kitch, on the other hand, is more open and optimistic, a playful character given to seeing the good in everything. World-weary Moses accuses him of being a “Plantation N****” with an appeasing tendency to “stay where he belongs”. But it’s human nature to nurture hope against all odds, and Moses can’t help yearning for that Promised Land.

The tone changes abruptly when a third character arrives, a white man (Charlie Bouguenon) out of place in the ghetto. He’s polite and solicitous, generous with his food and concerned for their wellbeing. Until suddenly racism cracks through the veneer, and his concern is revealed to be fake tolerance.

Bouguenon encapsulates white supremacy, his stage presence filled with assumed superiority. He also doubles as a policeman, openly hostile and trigger-happy. This is when the words “I can’t breathe” seem to be whispered in the audience’s ears, floating over the stage, a reminder that Pass Over captures the reality of life for black men and is not a work of fiction.

The play is being staged in the main John Kani Theatre, with the large auditorium redesigned to create more intimate seating around a rectangular stage. Director James Ngcobo hasn’t tried to recreate a street scene, leaving our imaginations to fill in the picture around a lamppost on an otherwise empty platform.

Pass Over runs at the Market Theatre until 28 March. Tickets from Webtickets.