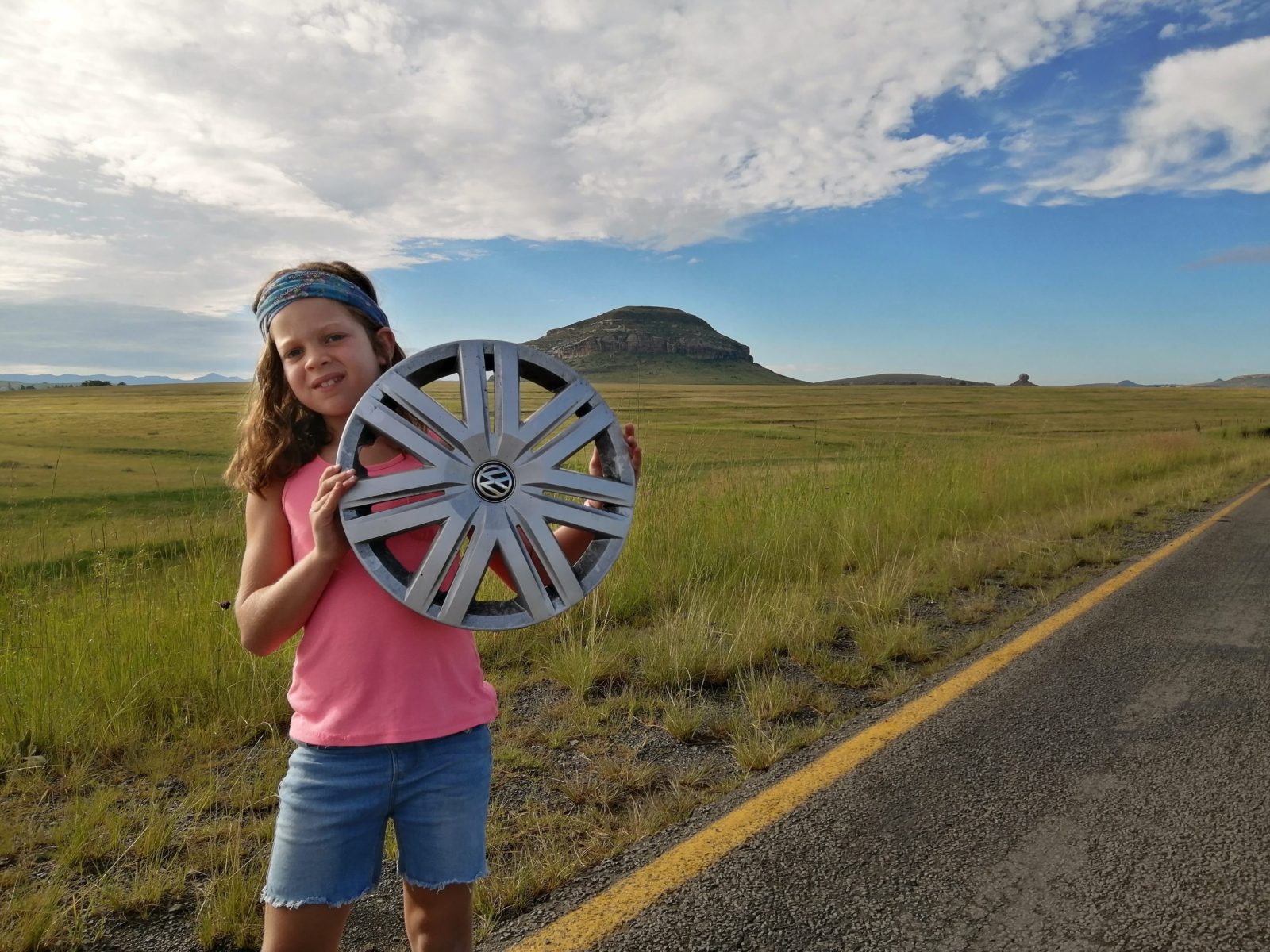 An ex-journo turned stay-at-home dad takes a 1,900km road trip from Durban to Cape Town with his seven-year-old daughter, and sees through the bubble that is Cape Town.

“Daddy-uhhhh! Julian’s just a big bully, really, even if he is 14, and he doesn’t even know that girls can fly space rockets. And bowl really well.”

The air hostess’ eyebrows raise fractionally, as my seven-year-old daughter throws down her dog-eared copy of Five Go to Billycock Hill in utter disgust. It bounces off the dinner tray and plops onto my foot. The businessman doing the Cape Times crossword in the adjacent aisle smirks, eyes down. I nudge my bumper Times Cryptic Crossword book forward, so he can see what proper cruciverbalism looks like.

I hear a chortle from row three behind me. I’m well aware of the controversy surrounding the internalised sexism of Enid Blyton’s Empire-addled mind. But, like 600 million other readers, my daughter adores her adventure stories, mainly as she gets to roll her eyes and sigh theatrically at the state of boys in general and brothers in specific, which is her great endeavour, chez nous.

We’re currently about 41,000ft above the Karoo, heading from Cape Town to Durban where we shall drive a hire car to Pietermaritzburg (the scene of a previous, journalistic life for me), ditch the hire car, shoot through to the VW garage near Franki Bananaz pub (such memories, albeit patchy), collect grandpa’s new work car which somehow ended up in the wrong province, and then hit the road to Cape Town. We’ll take the road over the top of Lesotho, spend a night in Clarens, and then whip past Ladybrand down to Richmond in the Northern Cape, to break the final leg of the journey.

At the moment, though, we’re just processing the marvellously stark bigotry of yesteryear. Luckily, feminist road trip stories are a well-established archetype. Think Thelma and Louise, My Blueberry Nights and even Little Miss Sunshine, to a certain extent.

Bringing along my little miss sunshine was a last-minute decision, one that had to negotiate her mum’s initial insistence that Caro attends her school Grade 2 induction session this very morning. Grandpa, however, is South Africa’s go-to expert on early childhood development, and he said it was “genius” to bring her along, so here we are. I don’t often win arguments with my wife, so there’s a deep flush of bonhomie in my chest. I forgive the 1950s, even if Caro adamantly does not.

This scene is to be repeated quite a few times over the next 1,900km. Belgian Chocolate Farm on the Midlands Meander? Yes, let’s pop in, Daddy, but did I know that Julian just ordered, not even asked, Anne to do the washing up? Golden Gate Park’s eerie, stained dolomites? Yes, Daddy-uhhhh, but Uncle Quentin said that girls have to hold hands crossing the road – boys also have to hold hands, don’t they? A bloody legovaan crossing the road just before Gariep Dam? Where, Daddy, sorry I missed it, but was I aware that a girl in her class doesn’t want to be called Georgina either?

Don’t get me wrong. She didn’t spend the entire trip sprawled out on the back seat devouring Famous Five stories and working herself onto a lather at the state of boys. She took along my old Nikon D3000 camera for the road trip, and took nearly 400 photos of this country’s remarkable changing, natural resources, as well as the back of my head and bacon on toast.

And, I hope, perhaps the pictures inside her head have been irrevocably changed too. In many ways, Capetonians don’t get to see what the rest of the country is like. I’m hoping to impress upon Caro the incredible vibrancy and diversity of small-town South Africa. I spent more than a decade driving round KZN and the Transkei as a reporter for The Witness newspaper, also with a photographer, just a bigger, beerier, balder version of the mini toggy beside me for this trip. It’s a beautiful part of the country, but the stories emanating from it were not all pretty. Many were dark and bloody and damaged some deep part of all of our journalistic souls, which we never ever talk about. That was 13 years ago. This time I am trying to see small-town South Africa through a privileged seven-year-old’s eyes.

“It feels like South Africa is a country of bubbles,” Caro says to me as we leave Clarens, that little gem of artisanal, boutique magnificence. I think she’s been eavesdropping on my phone chats with my wife – either that or she’s really taken the talk of “Covid bubbles” to heart – but I know what she means, I think.

This country has little pockets of svelte, elite excellence, where the hummus never runs out, the gin is always herbally iced, the staff are hidden away behind the hills, and you never, ever hear the sirens. A hipster dystopia, then, perfectly insulated from the decaying tumbleweed Badlands. Blue Tick towns where the quaint, rocky, bumpy roads are kept that way not to preserve the bliss of Arcadian allure, but rather as a means of deterring any riff-raff who can’t afford a 4×4. Or so you might say if you had to bus in 20km every morning to clean up the spilt smashed avo while your employers cavorted in the achingly blue pool.

But the rest of small-town South Africa appears to have been sidelined. Sidelined by the highway, and sidelined by any meaningful service delivery and socioeconomic development. Many small towns are simply crumbling into tumbleweed.

Away from the toll roads, the country’s byways are being pulverised by a continuous stream of articulated lorries. The night we stayed in Pietermaritzburg, the local papers led with the story about a local man who was killed when he went to help his daughter whose car had broken down on the N1 outside town. He parked on the hard shoulder, and both he and his daughter were killed when a truck ploughed into both their cars. The truck driver said he saw the parked cars, but he was unable to move out of the way as he was being overtaken by another truck. The number of lorries must have tripled since I last drove all these roads, often bestriding all three lanes.

In 1,900km I did not see one freight train. And the road travels parallel with the railway, pretty much through the Karoo. On one 100km stretch between Clarens and Fouriesburg, we passed eight cars broken down on the side of the road, all with bust rims or bust axles from the increasingly swampy potholes. Everyone stopped to ask if help was needed. It felt like an impromptu spread-out road party. I read this week that local farmers had banded together to fix some of these potholes. It’s a given that the local municipalities would not have done so.

Pietermaritzburg, gem of the Midlands, is fast becoming a tumbleweed town. All the laanies have fled with their Fortuners into the Hilton and Howick mistbelt, and those two towns are pumping with a real sense of entrepreneurial smarm. But you get a sense of their displacement rage by the way svelte housewives in luxury SUVs tailgate your car on the Midlands Meander. Their time suddenly became more precious than mine. That never used to happen. Not once.

You might have seen reports in City Press and on News24. I don’t know what it would take to fix Pietermaritzburg. Maybe we could invite the Chinese in. They’re the only ones with the cash to rebuild entire towns up from scratch. They’d have to supply their own generators, though. My toggy colleague has taken to spending months in the Transkei, where there’s a more reliable source of electricity and water than in his leafy suburb in PMB.

The politics is way over Caro’s head. But as each 100km chunk of road vanishes beneath our tyres, she seems to be getting quieter, less giggly. “People are all the same,” she tells me, after an hour’s silence between Winterton and Little Switzerland. “They wear different clothes and eat different foods and speak different languages. But they all want to laugh and eat and touch and walk, so that makes them the same.” Her words. Unprompted, and naïve, but she’s right in a way that social media never allows us to comprehend.

The people of this country are real human beings, not just avatars. We forget that. The waiter at the Protea Hotel in Clarens made her giggle at his clowning around with the little umbrellas in her ice cream. She made the petrol attendant in Laingsburg laugh as she tried her Grade 2 Xhosa and Afrikaans on him. Everywhere we stopped, we saw big smiles on people’s faces, and it makes you wonder how much longer South Africans will tolerate being utterly betrayed by their leaders. Or before another leader comes along who promises to fill the potholes and drain the swamp. DM/ML