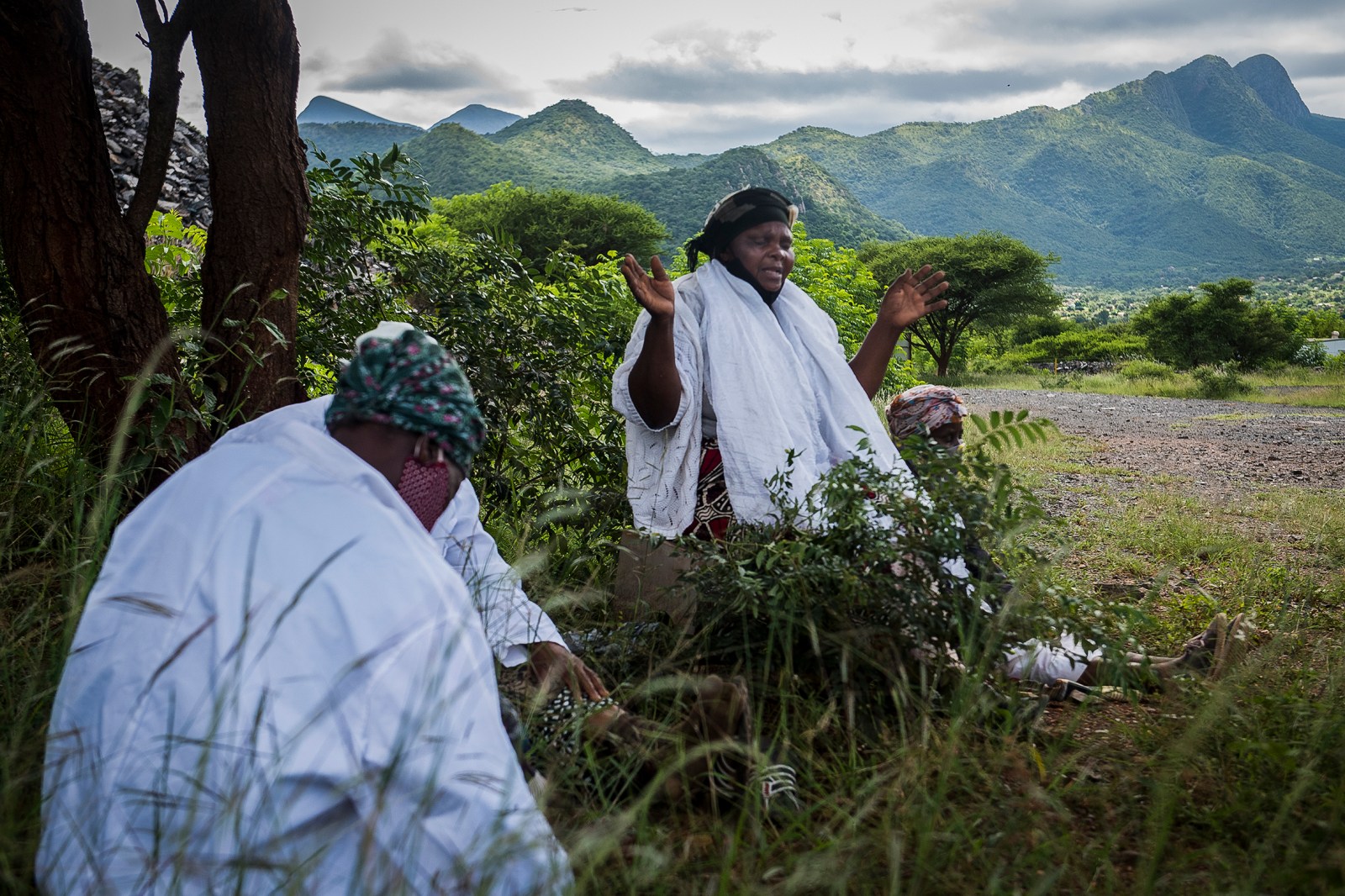 Rose Mkabi (centre), mother of Yvonne Mnisi, during the prayer ceremony at Lily Mine. Mkabi said, ‘It is very painful for me. When we entered the mine it felt as if I could see Yvonne in front of me and she was going to return home with me. But I am happy that I was able to pray because I asked God to intervene.’ (Photo: Shiraaz Mohamed)

Five years on, the mothers of three mine workers who died in an accident at Lily Mine in Mpumalanga still hold a vigil at the scene of the incident.

On 5 February 2016, Lily Mine reported that more than 70 mine workers were trapped underground after a mineshaft collapsed. All were rescued, except for Pretty Nkambule, Yvonne Mnisi and Solomon Nyirenda. The three were in a container above ground that plunged into a sinkhole, trapping them underground. Rescue efforts continued for days, but proved futile.

Five years later, the mothers of the trio, Fiona Nyirenda, Lomvimbo Mavuso and Rose Mkabi, still seek closure. Camped about a kilometre from the Lily Mine gate, with several former miner workers and community members, they live their lives in pain, prayer and hope as they wait for the mine to be reopened and for the container to be retrieved so they can lay their loved ones to rest.

The group set up camp two years ago in an effort to grab the government’s attention.

Group leader Harry Mazibuko says: “We arrived on 30 April 2019. Why? It is simple, because it was over three years and we heard nothing from the government, from our union, from the mine management, from the business rescue practitioners in terms of when and how they were going to retrieve the bodies.

Lomvimbo Mavuso, mother of Pretty Nkambule said, “It’s very painful. I can’t sleep at night. Every day all I can think about is when will they get someone to retrieve the container. I think about my daughter. She left behind a five-month-old daughter when she was sucked into the ground with the container. Once they are retrieved will I be able to get rest.”

Fiona Nyirenda, the mother of Solomon Nyirenda, said, “This thing is traumatising me mentally and physically. We need help to retrieve our children so that they can be buried in peace. I think about them, I think about what is happening to them underground. These are my thoughts every day.

“I am here because we need government intervention. Once we get our kids we will return to our houses. I don’t care if my house gets broken into while I am here. At least by being here will it help in bringing our children back.”

Nyirenda, who is diabetic, and has suffered a heart attack, says the emotional pain she endures is more difficult than her health issues. She finds comfort from the other mothers. She says some days are really difficult for her and has vowed to camp outside the mine until her son’s body is retrieved.

Despite being victimised and subjected to a couple of attacks at their camp, the group remains steadfast and vows to remain camped outside the mine. They arm themselves with prayer, not only for their protection, but also for the retrieval of the container.

“We start our day at 5am with prayer,” said Mazibuko. “We believe in prayer; there is nothing else we can do but pray. We pray that our government can see things the way we see it, that they can have mercy on us. We pray for South Africa as a whole and for unemployment. Again at midday we pray and share any new developments that have taken place. The last prayer is at 6pm. We have our supper after that and go to bed. That is how we spend our days.”

Daily Maverick joined the group as they conducted a prayer ceremony at the mine. The group was allowed only 30 minutes to conduct their prayer and was not allowed to go close to the sinkhole for safety reasons.

Commented Rose Mkabi, mother of Yvonne Mnisi, after the ceremony. “When we entered the mine it felt as if I could see Yvonne in front of me and she was going to return home with me. But I am happy that I was able to pray because I asked God to intervene.”

Mkabi said her daughter was a precious person and very helpful around the house. She was a source of financial help for her entire family. She described her as having a good heart and as being very loving.

Mazibuko said of the prayers: “We do it once a month [at the mine] for the families. We are Africans; we have our cultures and our traditions. So it falls on that angle, to go to the mine. The three candles represent each of the mine workers. We are lighting the way for them so that they can find a way to come out. We are using prayer to make them surface.

“The closer we get to the site the better it is. We wish we could get closer but we can’t, we are law-abiding families. We believe the prayers are working. Spiritually we have experienced positive results. They [the mothers] become emotional, they connect. The spirits connect with their loved ones. So we need to go to the mine once a month. It’s a very special prayer.”

The interdict sparked off a protest by former Lily Mine employees and community members calling for Arqomanzi to withdraw its case against Vantage Goldfields. They said the court outcome delays the process of reopening the mine and the retrieval of the remains of their three colleagues.

The Mpumalanga High Court is expected to issue a final order in May.

Herman Mashaba from ActionSA, who has been championing the case of the families, has indicated that the party has filed a motion to join the Mpumalanga High Court proceedings.

“ActionSA’s legal team will file papers urging that the court see this matter as not only a commercial consideration but one that has generated enormous levels of suffering for the families and former miners at Lily Mine.

“We want the court to ensure that, whatever it rules, it is binding, time-bound and that we can hold all parties to account to adhere to the tightest of deadlines.” DM