Getting to the Point of a long overdue revival 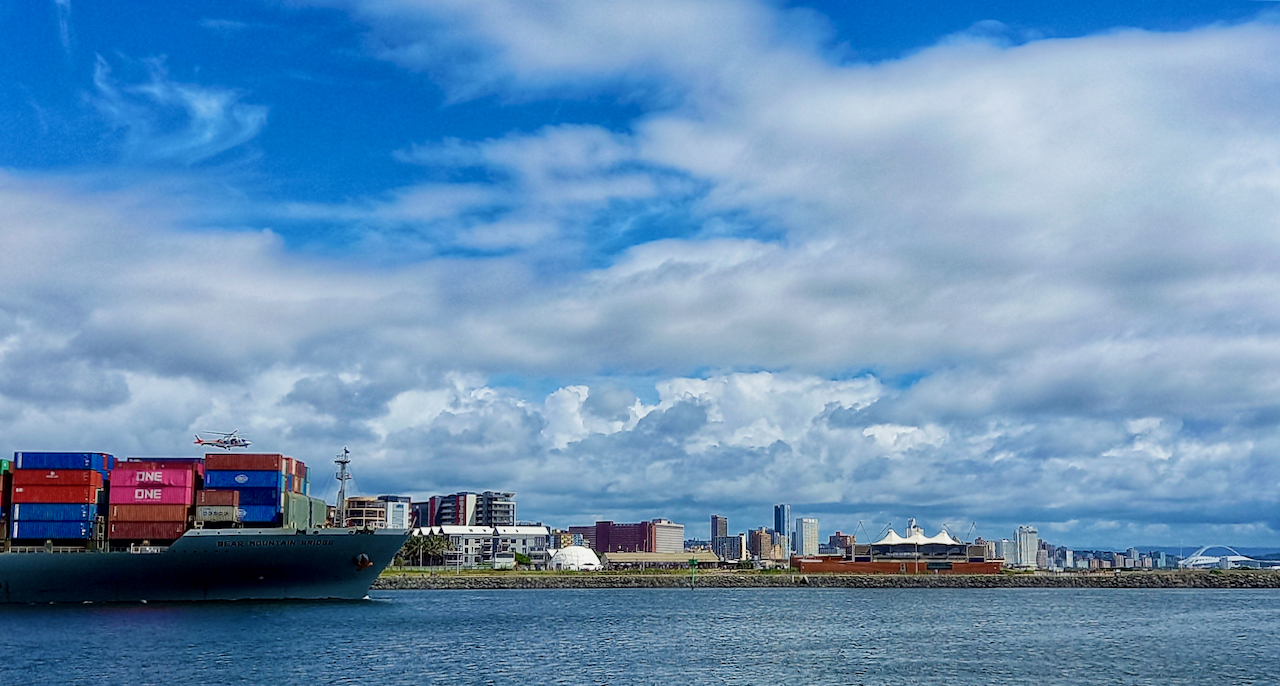 Out-the-tunnel vision across the harbour to On Point (the dome and adjacent building), Point Waterfront and beyond: Durban’s beachfront to the stadium. (Photo: Wanda Hennig)

You don’t need to go hungry or thirsty when walking at Durban’s Point Waterfront. There’s history, urban renewal. And tunnel vision. But not on the culinary front.

Steak, egg ’n strips. Once upon a yesteryear it was what one did in Durban of a lunchtime. On occasions. If you hung out with a certain sort of male friend. Before censorship was replaced by political correctness. In another lifetime. When Smuggler’s Inn thrived, with visiting seamen spilling in off ships to party with locals, hookers and strippers. By and large more of a draw than the steak ’n egg part of the three-way deal. All this at the old Alexandra Hotel, a celebrated dive way down on Point Road, now Mahatma Gandhi, that served a mean porterhouse too.

But now when I Google, there is very little about the Alexandra Hotel. Nothing worth linking to. So let me stop reminiscing and just say you’ll either remember Smuggies because you went there. Or because you refused to go there.

And it is now long gone. Physically at least.

But walking-tour guide, Alison Chadwick, mentions it and points out the derelict site where it once was, on her Point Walk, which I did last Sunday. For two main reasons.

First, I was planning a story on the Point Waterfront, which is coming into its own after years of promises broken, expectations unmet, ruin, creativity, pockets of revival and interest. Most notably architect Ndabo Langa’s The Chairman jazz bar, a Covid and curfew (hopefully temporary) casualty, but for the previous 10 years a late-night destination drawing people from around the world.

My intended focus was the new On Point Waterfront, a brewery with eateries, which has opened in what was the temporary home of the Durban Underwater Club, the Point Yacht Club beach site and other clubs displaced from the beach (and now back there) while the city’s new Promenade extension (opened during Covid) was being built.

It is one of several good places one can now go to eat and drink on this wedge of Durban with high rises, waterways, restored buildings and a residue of decay that runs close to the entrance of the harbour.

My second reason? A friend who had already done the Point Walk wanted to do it again: so she could cross to the Bluff side of the harbour on foot through a tunnel which, until she told me, I had no idea was there. A functional tunnel built for sewage and waste-water that runs deep beneath the harbour.

You’re born in a city. Think you know it so well. Then come upon a fact like that. This undersea adventure hadn’t been included the first time my friend walked. She was keen to tunnel through. So was I.

And from the other side – the Bluff side – the walk afforded us great views back to the city. But nothing culinary to write home about, so I won’t.

The Point Walk meets at Mahā café, which opened a couple of short weeks before lockdown. With success guaranteed, given that the owners brought in one of KZN’s best, UK foraging chef Charlie Lakin to run the kitchen and devise the menu.

Mahā grew slowly, offering what it could, as Covid restrictions lifted.

It has now become a breakfast and lunch destination for food lovers around the city. While, right now, Lakin is recovering, muttering impatiently on Facebook from his home after an accident while riding his motorcycle. More on him and Mahā in TGIFood when he returns.

The walk takes one past Robsons brewery and restaurant, which opened in its present location about five years ago, after launching in Shongweni in 2006.

The Stewart family, Donn, Gary and passionate brewer, Brian, bought the craft brewery in 2012 and bravely moved it to the current spot in 2016. Where Brian offers 90-minute brewery tours with lots of tasting. Where you can get a more than half-decent hearty bar-meal to go with it.

And where, across the street and almost directly opposite the front door, progress is being made on a R200-million new Durban Cruise Terminal. Planned before Covid, the current progress of the development suggests renewed cruise industry optimism. And a prosperous future for the brewery and the whole area if and when tourists return.

On Point Waterfront, directly across the street from Mahā, is a collaboration spearheaded by leadership and events mover-and-shaker, Wally Pelser. Who pre-Covid had no idea he’d be opening what promises to become a landmark Durban hangout joint.

His long-time day-job is team-building, he tells me when we talk. But it is what he and an assortment of partners do for fun that is of relevance here.

“We took over in 2018 and grew it to 10 times the size, doing it as a side-hobby business,” the one-time school teacher shares, not sounding boastful, just matter-of-fact.

During Covid, with both gin and beer impacted, he was talking, he says, to Daniel Keggie, preeminent surfboard shaper: “The best there is.”

“Daniel was keen to open his own business but didn’t feel he could run a business. So I said I’d do that part.”

Together they launched Point Surf Company, which makes surfboards, largely for an international market. Of relevance here because, turns out they had opened directly across from where On Point Waterfront would come to be.

“While opening, I saw the big empty warehouse space that had been the temporary club. I was looking for somewhere to hold special events.”

He tracked down the lease-holder, who given Covid no longer wanted to open there. He got some friends involved. They decided to relocate the brewery to the space. And spent R3.5-million on both decor, including graphics by renowned muralist Giffy (Duminy), and – out of sight to the casual visitor – on underground work, including setting up for the fermentation tanks that will be moved to behind the bar.

They only finally received their liquor licence last week, to sell their beer and gin-on-tap.

Meanwhile, they had interviewed 22 applicants to select five hand-picked food vendor tenants who they felt would work for the venue and anticipated clientele.

Razia Khan, for one, whose outlet, The Rolling Pin, is halaal and sports a fired-up pizza oven.

She and her daughter started their business “from our humble kitchen”, she recounts.

They supplied delis and butcheries and did roadshows and events: “Building our brand for nearly 10 years.”

Before opening not long before Covid in The Food Box, a food court of small independent eateries in the Durban suburb of Morningside.

“We have a Mediterranean focus. Healthy. Brown flour for our crispy pizza bases.” I can vouch for crispy and good pizza, given she insisted we give the one she’d made for our picture a try.

Over the past several years the Bike & Bean has become a favourite hangout spot for bikers and others in search of good coffee at a spot, north of North Beach, on Durban’s beachfront.

They too are now at On Point. Offering coffee, chilled items to go and a good vibe from early, before any of the other eateries there open.

Zama Mpungose got her training as a sushi chef in a John Dory kitchen. Having started as a cleaner, with no idea she would develop a passion and palate for raw fish.

She has done the rounds of Durban sushi outlets, perfecting her slicing and skills.

Now she cuts and plates at Reel Sushi, which is a John Dory franchise.

Working alongside Khumbu Dlamini, who helps with and serves the outlet’s other seafood specials and man-size breakfasts for large appetites.

VB’s, which dishes up casual tasty quality fast-food dishes, started life and grew from the Virginia Beach food truck, popular for some time at the eponymous La Lucia beach between Durban and Umhlanga.

Still to move in is the fifth food outlet, Kung Thai, which like The Rolling Pin, is expanding from The Food Box.

A sad Covid casualty doors away from The Chairman is Ciao Bella Cafe. Think Slow Food and Italian. Fresh, home-made pasta, lunches and breakfasts for those inclined to travel from the suburbs for good food.

Whether they will open elsewhere, one can only hope. Their Facebook page says “closed temporarily”.

But new in the spot – and promising – is The Breakfast Room, opened just this month after a few Covid-induced hesitations. Chef-owner is Kenyan import Kinyua Wanjiru, who came to South Africa 15 years ago and who tells me she trained for two years, at Cape Town’s Silwood School of Cookery.

Her fare is for me still an adventure waiting to happen. But the food looks good and the venue decor is different for Durban and quite frankly, a delight.

To end on an unexpected note, while writing this story and looking at pics where facades still stand as blasts from the past and where gentrification will inevitably happen, I WhatsApp a photographer friend from the steak, egg ’n strip era. We get to reminiscing about Smugglers. He tells me he is still good friends with the erstwhile owner.

“I have a pic of him in my clipping file, in a jacuzzi with a bunch of women,” I share.

“He lives in Israel now,” I learn, where he was a rabbi for a while and now produces videos. “Doccies.”

“He needs to do a doccie on Smuggies,” I write. “There’s very little online. Such a shame.”

So who knows? Maybe the tapestry of the Point Waterfront will one day include good stories from its more dubious past. DM/TGIFood