Vermeulen’s desire for excellence keeps him ahead of the pack 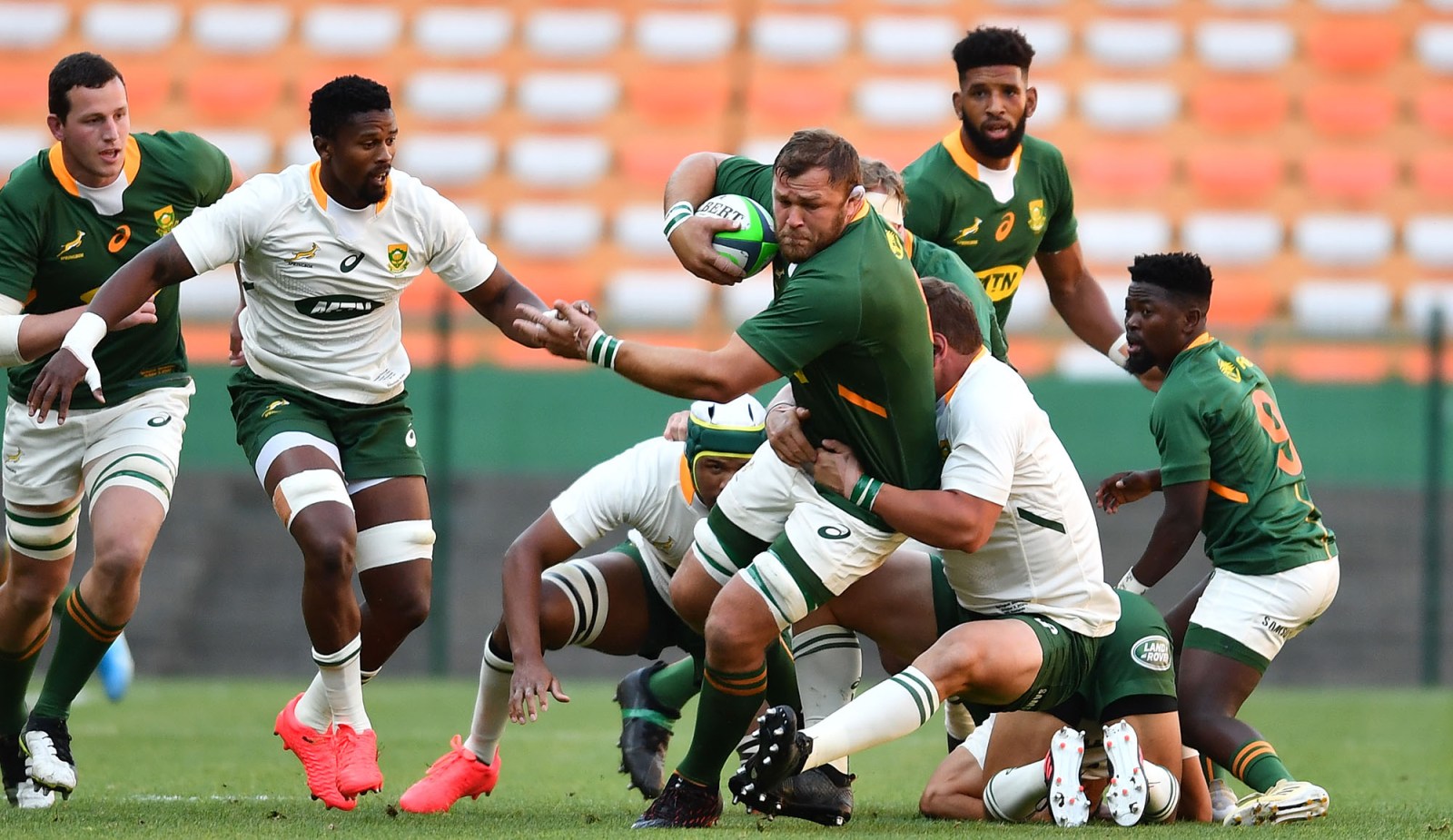 After being named man of the match in the final of Rugby World Cup 2019, which was the culmination of years of excellence, Duane Vermeulen could have rested on his laurels. Especially when Covid-19 struck and made motivation difficult for players.

Duane Vermeulen could have made some excuses as a senior player with a worldwide reputation and slacked off a little at the Bulls in a disjointed year. But he didn’t because he knows that his reputation as one of the best rugby players on the planet was not earned through taking the easy route. Duane Vermeulen has come a long and hard road to the pinnacle of the game. Shortcuts are not in his vocabulary.

Vermeulen lost his father as a young boy. His dream of playing at RWC 2011 was shattered by a knee injury. His Bok debut only came in 2012, and from that moment on, when he is fit, he is almost always the first name on the team sheet.

In 2014 he dominated the All Blacks at Ellis Park, playing a blinder with broken ribs as the Boks claimed a rare win. It was a superhuman effort. He was a standout performer at RWC 2015, showing subtlety and brute force in equal measure. His behind-the-back pass to Fourie du Preez for the winning try in the quarter-final against Wales was a delight.

And so the highlights reel goes on. Vermeulen felling Australians in monster tackles, Vermeulen running over Englishmen in Bloemfontein and Yokohama and just about everywhere in between. His standards never drop.

The man known as “Thor” is never off duty when he plays rugby.  He plays every game as if it’s his last, hits every ruck and tackles as if he was seeking revenge because of an old slight. Duane Vermeulen is the epitome of excellence and professionalism.

He trains as if he were a 20-year-old rookie and he competes as if there are five guys waiting to take his place when in reality he is the closest thing to irreplaceable as there can be in a team sport.

Maybe fear of failure drives him, or maybe it’s an insatiable will to win; to be the best. Whatever internal motivation he finds, he would make a fortune if he could bottle and sell it.

This week Vermeulen was named 2020 SA Rugby Player of the Year for a second time. It was a much-deserved accolade for a man who led the Bulls to the Super Rugby Unlocked title, and the Currie Cup. Those two trophies were the Bulls’ first silverware in a decade.

He also captained the side and played mentor to many new faces in the Bulls environment.

Vermeulen became only the second player to win the Currie Cup with three different teams – after victories with the Cheetahs and Western Province.

“It doesn’t matter where you play the game, you want to give your best all the time,” Vermeulen said. “Hopefully you can contribute to the team’s cause.

“I was lucky to win with the Cheetahs in 2007 as a youngster, which gave me some great experience. A few years later I played with some legends in a strong Western Province team and now it was as an older guy where I had to guide youngsters.”

Individual accolades in rugby almost always go to a player from an excellent team. In the Bulls, Vermeulen was part of the best domestic team in 2020.

When White led the Junior Boks to the world title in 2002, the Springboks to the Tri-Nations crown in 2004 and the Boks to World Cup glory in 2007, there was no prize for the best coach. SA Rugby corrected that oversight recently.

The awards belonged to the Bulls, with their star outside back Stedman Gans also picking up the SA Sevens Player of the Year award. Only Lions centre Wandisile Simelane upset the light blue dominance by being named Young Player of the Year.

“It was a very tough season, but Duane was superb – not only on the field, where his performances were on par with the very high standard we’ve become accustomed to from him, but he also led the Bulls with aplomb as our teams had to navigate numerous new curve balls and challenges,” Mark Alexander, president of SA Rugby said.

“I would like to congratulate Jake and the Bulls on their season, as well as Wandisile, Cornal, Stedman and Jaco (Peyper – referee of the year). I also have to acknowledge all our teams and players who worked tirelessly under difficult circumstances to ensure that we saw some rugby on local soil in 2020.

“A lot of hard work went into making the season a reality and I would like to thank everyone who played a part in making it happen, especially our broadcast partner and sponsors, who stuck with us through tumultuous times.”

Vermeulen, at 34, showed that greatness is achieved through consistency over time. Awards are nice on a CV but success comes from being brilliant week-in, week-out, year-in and year-out. It also comes from always looking forward to the next challenge.

Vermeulen has already turned his attention to the upcoming Rainbow Cup where the Bulls will play against the best teams from Ireland, Wales, Scotland and Italy.

And beyond that, Vermeulen is eyeing the British & Irish Lions series in July, regardless of whether it will be played in the United Kingdom or in South Africa. And even further down the road, he still has thoughts of making it to RWC 2023 in France, when he will be 37.

“Mentally I could go until 2027, but I don’t know if the body can,” Vermeulen said. “If I can still pull my weight and play my part in the squad then I would like to keep going. I’ll keep doing my best on the field and then it will be up to the coaches and selectors.”

“The Rainbow Cup would be really beneficial for us,” Vermeulen said. We would be up against guys who might be selected for the Lions series and we’d be getting used to the conditions, if it happens that we have to play the Lions series in the UK.

“Also, it’s a good chance for the Bok coaches to see how we perform in those conditions, to see who they can rely on and who they can pick for those specific conditions.”

Vermeulen is one player coaches won’t ask to prove himself because they know his value. But Vermeulen will still set out to perform when he’s back on the field and prove his worth again, because it’s the only way he knows. DM