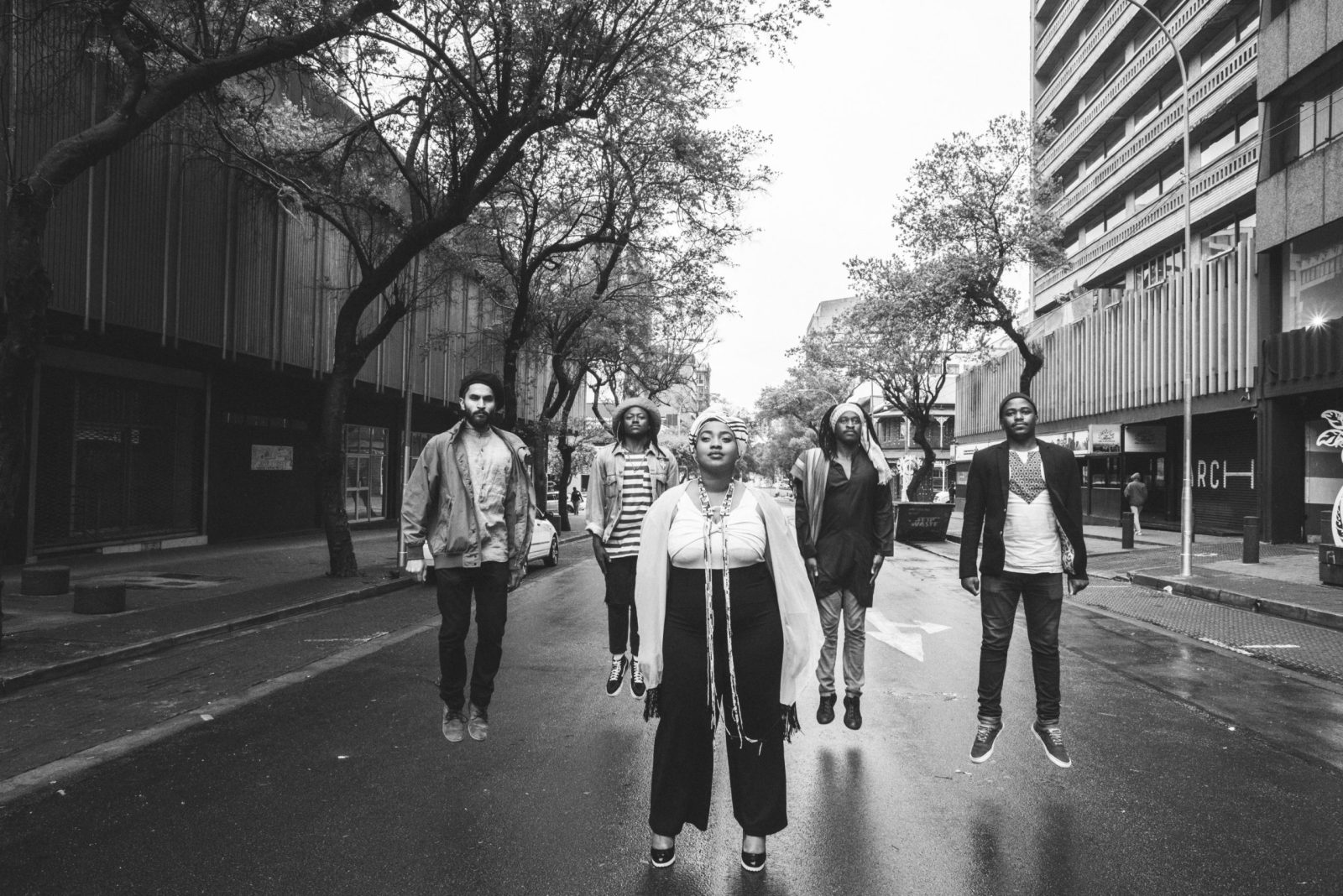 “Generally, we are told that our ancestors are the mediators between us and God. If you want to access God, it’s through our ancestors… [Abaphezulu] is about that conversation,” explains 31-year-old Nhlanhla Ngqaqu, the leader of the contemporary jazz group, iPhupho L’ka Biko. He is referring to the band’s latest single, Abaphezulu, which speaks to the relationship between living beings and ancestors.

“Everything begins with the spiritual, even before you create the music.”

“In our land we need employment, we can’t even think about wealth, we’ve been reduced to that level of just wanting a mere job, just for survival,” says Ngqagu.

The nearly nine-minute track kicks off with guitar strings and the drum set’s ever-present cymbal, building slowly. At the two-minute mark, vocalist Siyabonga Mthembu starts singing, then his voice is joined by the backing vocals, all while he matches the escalation of the jazz instrumental. The upbeat and repetitive lyrics, the slow-playing sax and the drums give off a live gospel performance feel. Mthembu’s voice comes into its own as he punches his point through and gives the song plenty of energy, along with the backing vocals.

Released on 29 January 2021 in collaboration with London-based label Brownswood Recordings, it is part of Indaba Is, a compilation curated and co-produced by celebrated vocalist and pianist Thandi Ntuli, as well as Mthembu, a multifaceted performer who is familiar to his fans as the lead singer and co-founder of the band The Brother Moves On and as Hymnself. Both Ntuli and Mthembu are also members of the jazz band, Shabaka and the Ancestors.

“The musicians I would work with [at university where] we usually worked in ensembles, basically they were people that I had that musical connection with, that’s where it started,” Ngqaqu says. “We had sound rooms and instruments. But over the years I started working with people outside of university. I would meet those people at jam sessions and church, a jazz mixture.”

In Zulu, iphupho means “a dream” but in the band’s context it refers to “God the giver and fulfiller of dreams”, and Biko speaks to black consciousness, honouring anti-apartheid activist Steve Bantu Biko. Both references resonate strongly with Ngqaqu and the band.

“As a black person, no one can teach you how to be black. The world teaches you how you are black… That brings a lot of questions, and also no one can teach you God; your existence makes you question these things and with that curiosity, I could make those links and say, ‘actually, why is the world so anti-black?’ And then you read a book like I Write What I Like: Selected Writings by Steve Biko or Black Skins, White Masks by Frantz Fanon and you get a better understanding of the articulation of your lived black experience.”

Ngqaqu’s inspirations vary from gospel and jazz to African spirituality and visual art, such as the work of Noria Mabasa, the pioneering 82-year-old Venda sculptor and woodcarver whose work is inspired by dreams, visions and daily life. The band explores similar themes: religion, tradition, origins, displacement and race.

Beyond music but not independently of it, Ngqaqu says he is also influenced and inspired by his community – and that the band is always remembering to create music not for themselves but “for the people”. His family and the prevalence of music at home while he was growing up, add to the eclectic influences that result in the band’s sound.

“My (grandmother) was always singing; my mother was always singing in a choir; my aunts would take me to performances to see sketches and singing groups; my uncle collected music so there were always vinyls around,” he says. His life was paved with the songs of music icons such as Yvonne Chaka Chaka, Stimela, Dolly Parton, Donna Summer and Miriam Makeba, as well as pianist Moses Molelekwa and the king of Zulu guitar, Madala Kunene. Later, at university, Ngqaqu started to listen to more jazz, playing the music of Charlie Parker, John Coltrane and Charles Mingus.

The varied influences come through strongly in the band’s experimental sound and make it difficult to confine them to a single pocket of jazz. From powerful vocals by Gaqa to Ngqaqu’s low-pitched upright bass, it’s a great mixture of jazz sophistication and the raw energy of session musicians in a church.

Perhaps much like gospel, Ngqaqu also views the music as a tool to heal: “That’s the greatest calling with… music… [we] ourselves need healing, the world is sick, people are sick. When we go out there to perform, we go out there to heal.”

Although iPhupho L’ka Biko isn’t able to be on stage at the moment, Ngqaqu hopes people will find the music soothing and healing no matter how or where they listen to it – even while sitting at home. DM/ML

Indaba Is is available on all platforms.