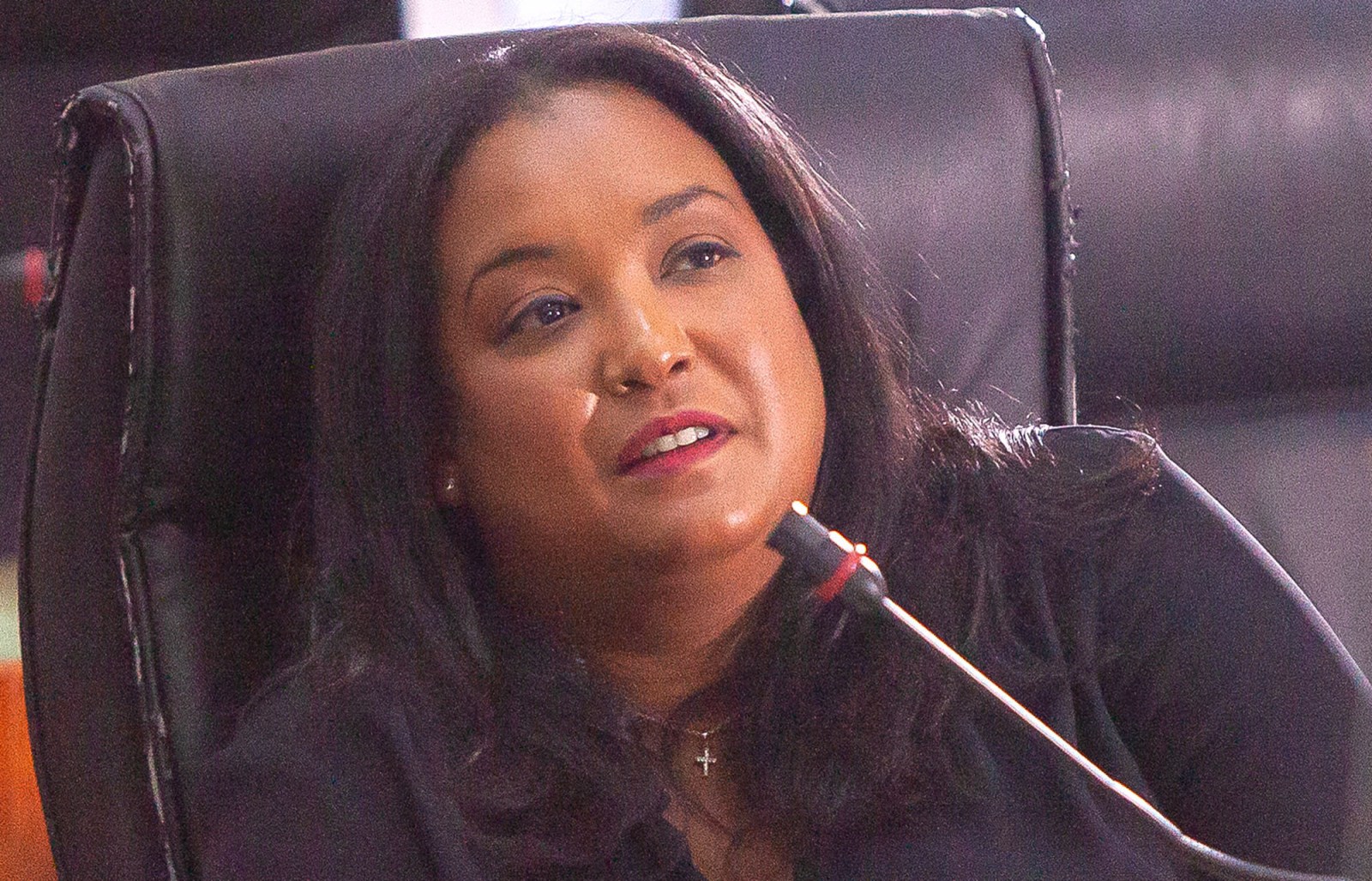 Goodson left her job at Anglo American to officially start work as TMC CEO in January 2016 after she was recruited by Clive Angel from Integrated Capital Management (ICM). Angel reported to Gupta lieutenant Essa, who owned 60% of TCP, which included various subsidiaries such as TMC.

Before she started as TMC CEO, Angel set up a range of meetings for Goodson to learn about the company’s work and forwarded her documents. TMC planned to partner with McKinsey to perform services for Eskom and Angel sent Goodson revenue projections she said were compiled by McKinsey partner Vikas Sagar.

The management consultancy giant estimated TMC and McKinsey could make R10-billion in profit from Eskom over three years, said Goodson. Trillian was due to take a 50% cut.

“For consulting, this was shocking, to say the least,” Goodson testified at the State Capture Commission on Thursday.

“As a start-up company, Trillian making this kind of money over three years was bewildering.”

While Goodson was TMC’s only employee at the time, she continued to push McKinsey for her company to take a more active role in the Eskom project.

She said McKinsey officials were dismissive, responding, “Why are you even complaining? You’re going to get paid anyway.”

When she escalated her concerns to her boss Essa, he was adamant that Trillian wanted its projected R5-billion revenue from Eskom, regardless of whether McKinsey wanted it to work with the firm or not.

Eskom paid Trillian R595-million and McKinsey more than R1-billion before the deal was terminated after a mere six months. McKinsey, which has denied it knew Sagar was allegedly conspiring with Essa, has since repaid the fees it charged and in December 2020 its senior partner Jean-Christophe Mieszala told the commission the company had since introduced new risk controls to avoid a repeat situation.

A court has ordered Trillian to repay its share. Eskom has sought to have Trillian liquidated to recover the funds.

TMC subcontracted the Indian company E-Gateway to provide the technical skills for its Eskom duties. Goodson said Angel told her Essa had an interest in the company.

Two E-Gateway employees from India and the United Arab Emirates came to work on the project and TMC agreed to pay the company a “ludicrous” 70% of revenue from its power generation workstream, said Goodson.

“For me, that was an exorbitant amount of money for two people. It meant that their charge-out rate per hour was something close to like, I don’t know, half-a-million per hour considering how many hours they worked,” she testified.

Goodson also testified on Mohamed Bobat’s alleged role in benefiting Trillian. Bobat, an associate of TCP CEO Eric Wood, interviewed Goodson in late 2015 along with Angel. Goodson heard Bobat was earmarked to take the TMC top job but had other opportunities.

From what I know now, I am ashamed that I did not do more. I should have pushed back on Clive’s instructions more. I shouldn’t have taken that invoice of R30.6-million to Mr Koko and spoke to them about paying Trillian directly.

Goodson asked Angel why Trillian placed such an emphasis on Bobat’s work and movements in government.

“Mr Angel said that Mr Bobat is positioned there to open the taps and create opportunities for Trillian so I must appreciate that Trillian does not have people and doesn’t have a history and we can only ever do this work if we partner with global organisations such as McKinsey and Oliver Wyman.”

She also questioned Angel on how Trillian, which had no experience or track record, could vie for lucrative government deals. “His words to me, exactly, were: ‘You need people to open the taps’ was the phrasing he used and, ‘Our shareholder [Essa] can open the taps.’

“Trillian was just really lucky that even if you don’t have employees and you don’t have work history, you can still go and work in a ministry like Cogta,” Goodson testified.

“I know when I try to sell my services as a person, you have to demonstrate previous achievements and Trillian did not have that and yet the progression of these proposals had so much momentum and none of the feedback that you received was negative to suggest that you didn’t have a shot.”

She testified that she introduced herself to former Eskom executive Matshela Koko at an Eskom press conference, on Angel’s instruction, and met him again in February 2016 after Essa set up a meeting to discuss TMC’s work with McKinsey.

Goodson said she asked Koko if Eskom could pay a R30-million invoice directly to the company rather than through McKinsey. Koko said he could not pay TMC directly as it had no contract with Eskom.

Koko has denied any wrongdoing regarding Trillian and McKinsey’s role at Eskom. Goodson said she communicated regularly with Eskom’s procurement head, Edwin Mabelane, after Koko told her that he would be the point man from Eskom’s side.

Goodson also testified that she regularly interacted with Mark Pamensky at Trillian’s offices. Pamensky was an Eskom board member while he was also linked to Trillian and served as a director of the Guptas’ company Oakbay, which he declared to the energy giant.

Goodson resigned as TMC’s CEO after only three months. She had multiple misgivings about her new job. Trillian had not signed a contract with McKinsey for the Eskom deal and she was not informed about the finances of the company that she was meant to be running.

She also had issues with the company’s reliance on its connections for getting business rather than its merits – “the concept of tenderpreneurs getting work that you don’t deserve, so you’re just getting work without adding value”.

“Why could we not respond to [requests for proposals] like everybody else and have a fair fight, a competitive chance of seeing if our services are good?” she said she asked at the time.

In March 2016, two things happened that led to her resignation. She said she arrived at Trillian’s Melrose Arch office on 16 March and asked CFO Tebogo Leballo if the agreement had been signed with McKinsey. He said they had bigger things to worry about, as he had heard Zuma wanted to replace Finance Minister Pravin Gordhan.

Former Trillian Advisory Services CEO Mosilo Mothepu was also present and reacted with shock. She has told the commission that the previous year Wood had informed her that Zuma was going to sack Nene and she worried that her bosses hadn’t learned their lesson from “Nene-gate”.

Her suspicions were raised when she saw the Bank of Baroda account had a R300-million overdraft and would assign all transactional authority for the company to Chipkin. She signed on the condition that both she and Chipkin must authorise transactions. She resigned the next day.

Goodson has become known as a prominent whistle-blower since speaking out on her time at Trillian, but evidence leader advocate Pule Seleka questioned her about a sentence in her resignation letter – that the money wasn’t worth the risk.

She said Wood had asked what he could do to make her stay after she resigned. Goodson said she didn’t ask for more money and instead suggested the company needed to clean up its business model, which she claims Wood said would never happen.

“From what I know now, I am ashamed that I did not do more. I should have pushed back on Clive’s instructions more. I shouldn’t have taken that invoice of R30.6-million to Mr Koko and spoke to them about paying Trillian directly.

“I shouldn’t have opened the Bank of Baroda account because I know it was used to siphon Transnet’s money off to Tegeta. There’s a lot of things I shouldn’t have done. I was in this company for three months too long and it’s ruined my life.

“I should have spoken up more. But whenever I think about it I am comforted by the fact that it was only three months.”

Goodson’s appearance at the inquiry on Thursday was followed by former Denel chairperson Daniel Mantsha, who was testifying in front of Zondo in an evening session. DM