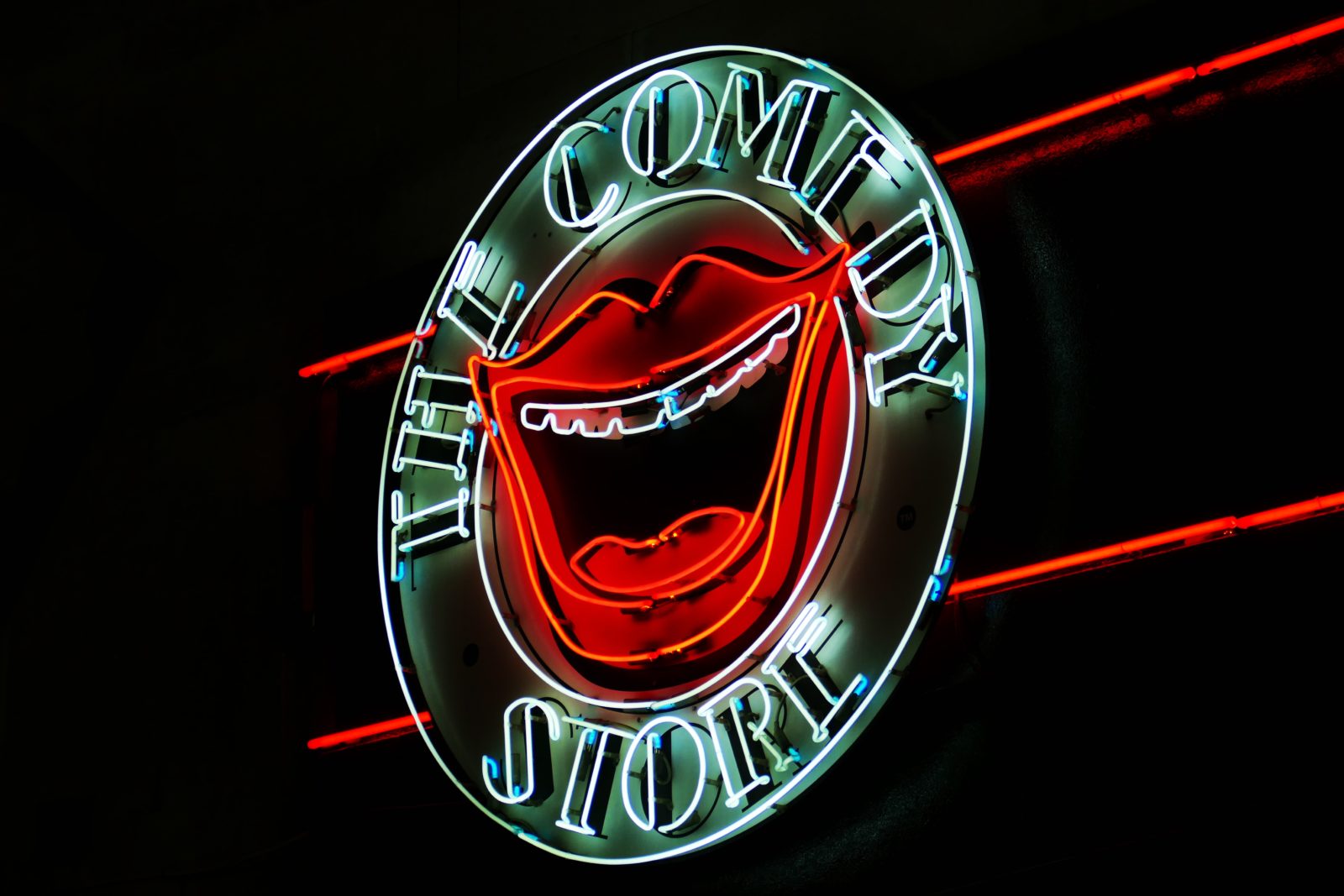 South African performers gather to discuss the importance of having a sense of humour and keeping comedy alive at the Take-a-STAND dialogues last weekend.

2020 was rough, there’s no denying it. And with the beginnings of 2021 faring only vaguely (if at all) better, it’s increasingly difficult to come to terms with this pivotal moment in time.

One of the industries that continues to feel the brunt of the Covid-19 effects is, of course, the performance arts, whose livelihood depends largely on crowds of people coming to watch performers do their thing.

On the weekend of 19-21 February, South African theatre-makers and dancers, gathering in Stellenbosch for the Take-a-STAND Dialogues, engaged in a series of discussions about the present and future status of theatre and dance in South Africa. Presented by SU Woordfees and STAND (Sustaining Theatre and Dance) foundation, the dialogues were an attempt to rekindle, at least partly, a community that has been splintered in the last year.

One of the topics revolved around the importance of comedy and satire and the state of it today. Perhaps it seems impossible, and irresponsible to laugh in times like these.

This begs the big question, a question that Kabous Meiring, TV host at KykNET, posed early on in the discussion about comedy and satire that she moderated with three other panellists: “what is the importance of art when a country is burning?” It became clear almost immediately that there are abundant reasons why art, specifically comedy, is of utmost importance, especially when a country is burning.

Firstly, there is no denying the healing power of laughter; multiple studies (such as The Psychology of Humor (2018), Laughter, a Scientific Investigation (2000), and NBCI’s article on “Laughter Prescription” (2009) to name but a few)  have pointed towards evidence that laughing regularly can induce physical changes in your body, like increasing oxygen intake and releasing endorphins. The catharsis that we experience when laughing is an underrated stress reliever, a blessing in a moment when we most need to be relieved.

Further, laughter, as much as crying, is a response to trauma. “Sometimes when you don’t laugh, you just have to cry,” notes Lee-Ann Van Rooi, actress, educator, and all-round hilarious personality.

Rob Van Vuuren, the multi-award-winning comedian, wholeheartedly agrees, quoting Kurt Vonnegut: “laughter or crying is what a human does when there is nothing else he can do.”

According to Van Vuuren, we laugh as a means of “dealing with the terror of realising that we are just these insignificant little clown particles floating around in an endless cosmos of rakes to step on and banana peels to slip on.” There is certainly something to be said for not taking life too seriously, for finding the fun in uncomfortable or scary situations.

Comedy and satire are also a powerful way of broaching what Lesego Van Niekerk, professional dancer, choreographer and producer of the YouTube series Black Corner, refers to as “tricky topics.”

The genre “is about challenging the audience and their beliefs and views,” the very nature of it makes these moments of reckoning “more palatable than having the commentary made in a more direct, ‘preachy’ form,” award-winning playwright Mike van Graan told Maverick Life in a conversation about satire and collective catharsis last year.

Humour and meaning go hand in hand, or at least, they should. Van Rooi demonstrates this point by placing a red dot that was given to everyone who came to the STAND festival in the centre of her forehead, imitating a bindi, a small colourful mark that is traditionally worn by married Indian women. “If anyone of you sitting here doesn’t know the significance of this [red dot] then there’s Google. At the end of the day, you will know something more.” By playing with the red dot, placing it somewhere it didn’t typically belong, Van Rooi “highlighted, as an artist, a certain sector of society that when you stepped in through the door you would not have known about.” Van Rooi, an educator herself, stressed that the educational benefits of humour could lead to some form of “cultural relativism. Or even cultural intelligence.” By compassion, perhaps, something that is sorely needed today and always. “The story is whatever is in front of you. If someone gives you a red dot, do something with it.”

The reimagining or reconfiguring of the world in moments of play like this could be called storytelling, or a means of escaping our day-to-day reality.

Van Vuuren talks about the goal of art being “to transport your audience in some way or another. I think that’s what we’re searching for. Whether it’s escapism or being able to reimagine our very human experience.”

All of the panellists agreed that sometimes, blatant escapism is a totally necessary and valid form of coping. Van Vuuren spoke of how much he enjoyed watching Space Sweepers, a Korean Sci-Fi film based, from start to finish, in outer space; Van Rooi of her recent obsession with horror and slasher films (“I want blood!”), and Van Niekerk, with her deep dive into the world of the CrossFit Games. “It’s completely removed from where I am and what I do, and that was my means of coping,” she explained. “No matter what’s going on, there’s Tia-Clair Toomey and Matt Fraser, and they are gunning to win.”

But above everything else, comedy, drama, satire, and storytelling of any kind, is, at its core, a way of connecting with one another. “If you’re creating anything,” Van Vuuren stated, “it’s just to try and connect with humanness on some level.

“We’re looking for connection. We’re watching formula one not because we don’t want to think about anything but because we want to imagine being able to drive. We’re watching CrossFit because we connect with that person who is sticking to their goals and achieving and winning, which is how we want to feel. We’re making more horrors because we’re aware that we’re living through a horror. It’s not, oh, I can’t look at it, it’s like ‘let’s look at it.’”

It’s clear that, in more ways than one, these moments of storytelling, humour, and connection are central to personal and community well-being. The real question then becomes, as Meiring so aptly posed it to her fellow creatives, “do we have the energy at the moment to create art that can help us escape?”

It’s certainly hard, Van Vuuren related “the touch is not there anymore. The natural instincts you have, the tools are not available. You have to think and re-think everything.”

But we have the energy, which doesn’t only pertain to professional creatives. With the rise of social media and the internet, everybody is constantly engaging in important community-building satire and storytelling, we’re all doing comedy all the time. “Anything happens, there’s a quick meme made about it,” Van Niekerk points out; Van Vuuren agrees, “it’s so rich, it’s alive, and it’s evolving at a breakneck speed.

“As comedians what we’re trying to do is find a really deeply personal response to that. It’s like we’re all experiencing these things on different levels. It’s about tapping into my isolation and my own loneliness in relation to the broader context. To filter through that mass of jokes,” said Van Vuuren. It’s the artist’s work to bring together a community by providing a simultaneously deeply personal, yet universal experience. Everyone has their own way of seeing things, and that in itself is unifying.

As Van Vuuren points out, Meiring’s question about comedy today, and whether or not we have the energy to make art is, in a way, null and void. “The question is pointless because it’s going to happen whether you like it or not. Art is a human response to the uncertainty of being alive, the terror of human existence. We do it because we’re human, and it’s all we can do in the face of everything that we cannot face or manage.”

It’s also why performers must think very carefully about the content that they produce and the effect that it has on their audience, a lesson that Van Vuuren had to learn the hard way last year when he apologised for doing blackface in 2013.

“I wish I could say I didn’t know any better at the time, but the truth is that I did,” he wrote on Twitter in 2020, apologising for his role in Leon Schuster’s movie Schucks! Your Country Needs You.

“I argued that his work [Schuster’s] was most powerful when it exposed white hypocrisy in the ‘rainbow nation’ and revealed the fears and anxieties of a white minority unwilling to relinquish its privilege,” Van Vuuren’s apology continued, “however as a white father of a child of colour I failed to examine my own privilege and prejudice.” Interestingly, instead of backlash pointing at the fact that the apology was seven years late, most of the critiques came from conservative white people who were angry with him for apologising at all.

Regardless, while quite late, Van Vuuren’s apology for causing hurt and “contributing to negative stereotypes from a position of power” was poignant and important. It reminds us that jokes can go too far and that there is often a terribly thin line between humour and hurt.

And it’s a line that we all have to navigate together because as Van Rooi reminded the audience, in the end, humour is compassion and understanding. It’s saying: “we’re all in the same boat, we have to pick up, we have to carry on.”

The talk ended with Van Rooi posing a challenge to creators: “I don’t think we’re doing enough to speak out against anything at the moment. I think as artists we’ve been trying to cope within our own little isolated spots.”

To which Meiring quipped: “someone could have made a joke about the corruption surrounding the PPE, at least.” DM/ML