THE TOOTH BE KNOWN

Something to chew over: Scientists get into the skull of 3.6 million-year-old Little Foot 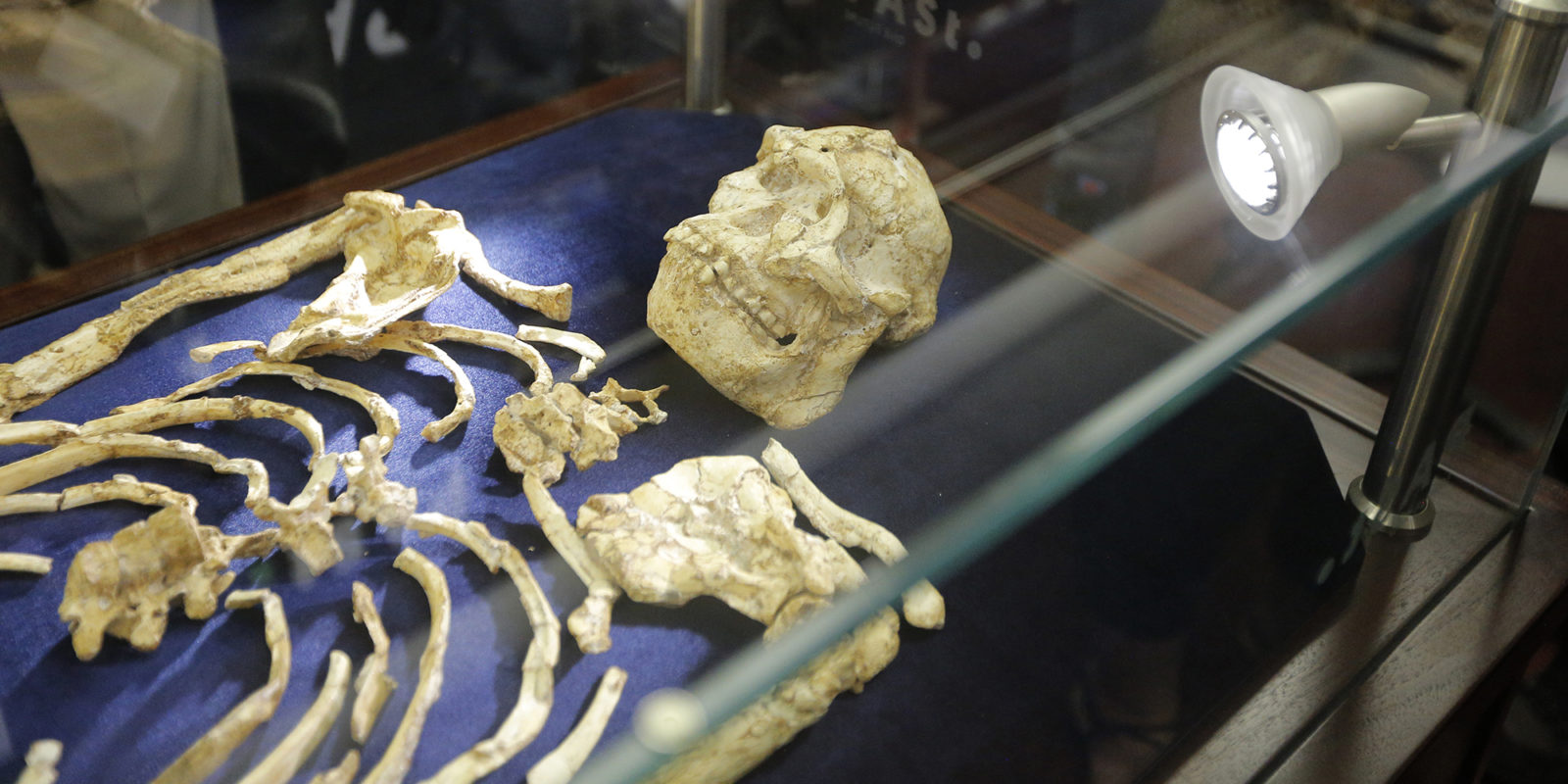 The 'Little Foot' hominid on display during the unveiling by Professor Ronald J. Clarke (unseen) and his crew at Wits University in Johannesburg on 6 December 2017. (Photo: EPA-EFE / KIM LUDBROOK)

Researchers get the unique opportunity to look at the finest details of the craniodental anatomy of the ‘Little Foot’ skull – and to learn about her life.

Little Foot had a hard life and it is a story told by her teeth.

The hominid, that lived 3.67 million years ago and is perhaps a human ancestor, experienced two malnutrition events as a child, then possibly had to adapt to a sudden change of diet.

Scientists know this now because of high resolution imaging of Little Foot’s skull, that allowed them to peek into what appears to be a sad life.

“I think it was a life spent struggling looking for food,” says Associate Professor Dominic Stratford, of the School of Geography, Archaeology and Environmental Studies at the University of Witwatersrand.

It allowed them to peer into the skull, without using hammers and chisels to break it open.

Their findings were published in the paper eLife on Tuesday March 2 and the article focused on the inner craniodental features of Little Foot.

“We had the unique opportunity to look at the finest details of the craniodental anatomy of the ‘Little Foot’ skull. While scanning it, we did not know how well the smallest structures would be preserved in this individual, who lived more than 3.5 million years ago,” explained the lead author, Dr Amélie Beaudet of the Department of Archaeology, University of Cambridge and honorary researcher at the University of the Witwatersrand.

“So, when we were finally able to examine the images, we were all very excited and moved to see such intimate details of the life of Little Foot for the first time. The microstructures observed in the enamel [of the teeth] indicate that Little Foot suffered through two clear periods of dietary stress or illness when she was a child.”

Little Foot is an early Australopithecus hominid that was discovered in the Sterkfontein Caves, near Johannesburg, by Professor Ron Clarke, in 1994. Three years later he found the location of the skeleton and the painstaking  work began on excavating the specimen. For the next two decades, Clarke  and his team went about removing the hominid from the hard cave breccia using a small air scribe.

After a process of cleaning and reconstruction, Little Foot was finally unveiled to the public in 2018. The skeleton has since been housed at Wits University, except for a period in June 2019 when the skull was sent to the UK.

“This is all very exciting,” says Clarke. “So all of these little clues fit together and tell us a story about her way of life.”

Unusual wear on her front teeth, as opposed to her molars suggest that Little Foot might have been forced to change her diet.

“Usually what happens is that general chewing wears down the molars, and this might suggest she is eating something hard… hard fruit, maybe some kind of vegetation. We still have to do quite a bit of work investigating these questions,” explains Stratford.

What the synchrotron has revealed could one day help in our understanding of where Little Foot sits in the human family tree.

No one is sure as yet. She might be a direct ancestor, or a relative sitting on a different branch. There is still debate as to what species Little Foot even belongs to. Clarke has tentatively identified her as Australopithecus prometheus. But this could change.

“So, for the time being I have put Little Foot into that species, (A. prometheus); in the future it may turn out that she belongs to a completely distinct species,” he says.

To help solve this riddle the plan is to image more of Little Foot’s skeleton bit by bit.

And from this we will be able to learn more about the life of a possible ancestor who lived 3.6 million years ago. DM