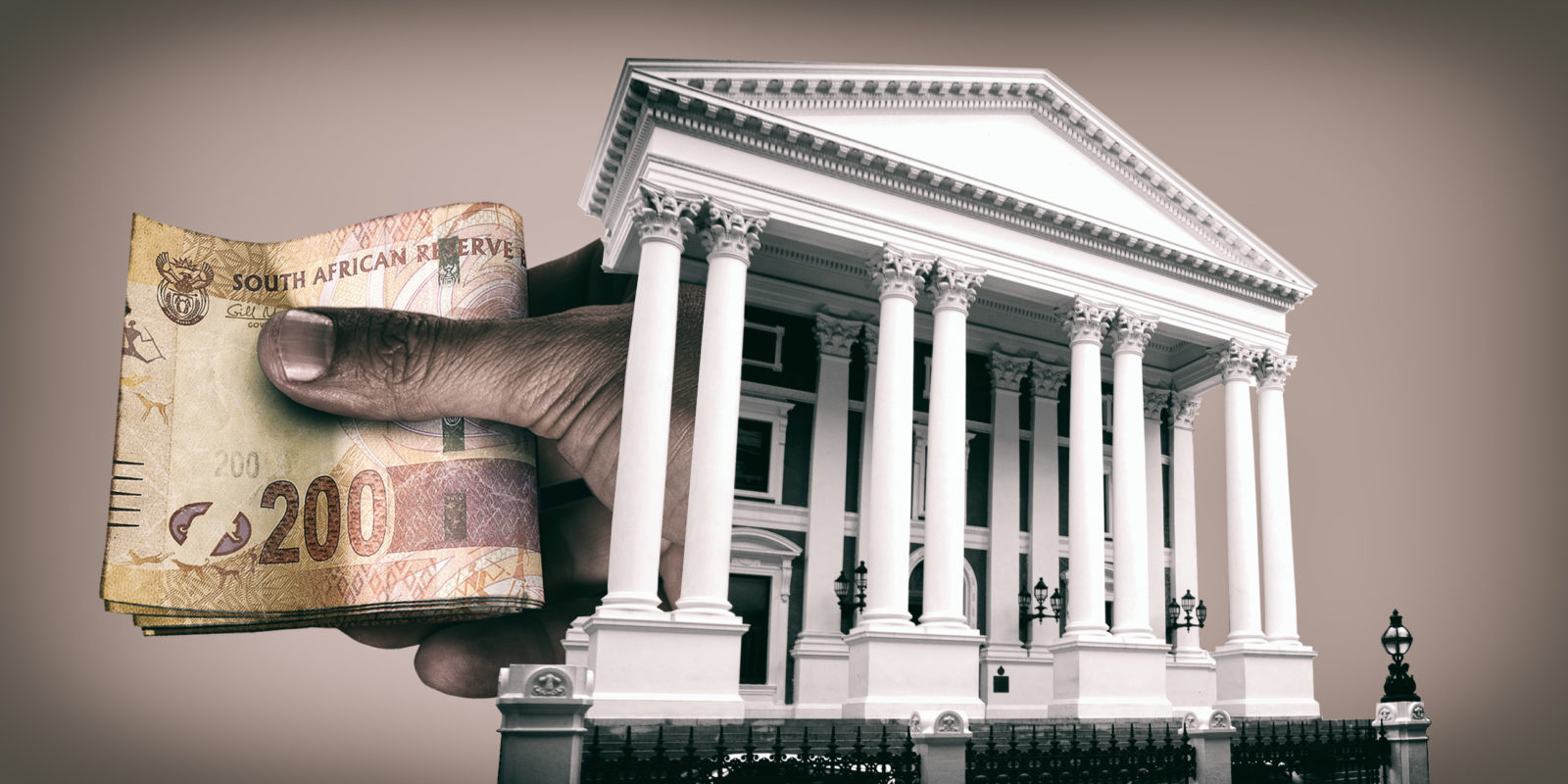 The Institute for African Alternatives has researched why Parliament has consistently failed to act against government abuse of public funds and reached the conclusion that it may simply be that the seats in the National Assembly are occupied by the wrong people. The fault line lies in Parliament itself and its inability to perform its basic constitutional oversight duties.

Research into ongoing failure to address Auditor-General (AG) reports showing persistent state abuse of government funds was initiated by Professor Ben Turok, the founding director of the Institute for African Alternatives (IFAA) in late 2019, just a month before his death.

Turok was adamant that he did not want “another report”. He did not want examples of all the weaknesses, revealed by the work of the AG. He wanted a developmental project that would change things. This should focus on the role of Parliament as an institution of our democracy, as part of the system of checks and balances, which had clearly gone wrong. IFAA will launch “Checks and Balances: The Auditor-General Project Report” on Thursday 4 March 2021.

In the first meeting with the full research team, to explain the brief in November 2019, Ben said:

“Peoples’ money is being squandered by the executive, and Parliament is complicit in this.”

His idea was to speak to people — people in Parliament, people in the office of the Auditor General, people in research and civil society organisations — to develop a plan on what could be done so that Parliament became effective and carried out its constitutional roles properly. He believed Parliament could be moved in this direction — as he had done himself, when he led Parliament’s enquiry into unethical conduct of Dina Pule, a prominent minister, securing her sanctioning and ultimate removal from Parliament by her reluctant party.

The research team of Nicol, IFAA researcher Bruce Kadalie and Production Manager Moira Levy worked for a year on the project — conducting interviews, consulting stakeholders, reviewing past reports and considering international experiences. The report documents this process, but its purpose is to identify paths for action — by Parliament itself, by political parties and by civil society.

The starting point was Parliament, which is responsible for ensuring that public funds are spent wisely in the public interest and are not looted. Parliament cannot do this work itself — it relies on the expert, independent services of the Auditor-General South Africa, who is appointed by Parliament (and the Constitution) to undertake government auditing. Our AG — the most solid of the “Chapter 9 institutions” — is recognised worldwide for its professionalism and technical excellence.

The project set out to answer the question of why the checks and balances written into our Constitution have failed. What could Parliament do to remedy the situation where the executive, year after year, does not implement AG recommendations to reduce the risks of irregular, unauthorised, and fruitless and wasteful expenditure?

Parliament does diligently scrutinise the reports of the AG into the finances of government departments and entities. This work is done by committees of the National Assembly. All of these, from the Standing Committee on Public Accounts (Scopa) to regular committees that follow every department, routinely endorse the recommendations of the AG in formal resolutions and committee reports. Yet the executive is rarely held to account. There are usually no consequences for ministers and for accounting officers when departments and entities ignore recommendations of the AG or breach the laws on the management of public funds.

Parliament provides scrutiny and oversight of executive action but has failed on accountability. Accountability is the fault-line.

What can possibly be done about this? The situation, on the face of it, is absurd. The country spends literally billions of rand a year on auditing and on identifying weaknesses in internal systems for managing public finance across government. Yet when Parliament and the Executive are told — specifically — about the dangers of money being misspent or stolen, they do not act to stop waste and theft!

The first is largely uncontroversial. But it is difficult to do. It comprises recommendations on improvements that Parliament can and should make to the way it works, to make oversight effective. These recommendations are not new. They can be found in Parliament’s own archives, in proposals put forward over the last 21 years by parliamentary committees and by commissions appointed by Parliament to review its procedures and operations.

Some officials in Parliament believe that all the proposals have been dealt with — and have been concentrated into an Oversight and Accountability (Ovac) model that Parliament follows. There is indeed a lot on paper. Parliamentary rules have been revised over years of detailed deliberation. But the test is the effectiveness of Parliament’s scrutiny of executive action, and the extent of Parliament’s success in holding the executive to account. Here Parliament has failed. And in multiple dimensions, as revealed in testimony before the Zondo Commission. It is clear that the Ovac model needs a complete overhaul and review, quite apart from its weaknesses in following through on issues raised by the AG.

The “Checks and Balances” report reminds Parliament of excellent proposals for improvement made in the past. It repeats many of them in the context of Parliament’s reliance on the reports tabled by the Auditor General. Kimi Makwetu — the late AG, who died suddenly in November 2020 — expressed frustration at Parliament’s apparent deafness to all the warnings and alarms. He asked: “How can these voices be louder?”

The Research Team is under no illusion that its proposals can be simply implemented. These are largely proposals that Parliament has heard many times before and has ignored — on purpose, or by inertia.

The second way is controversial. It takes the debate to political parties and the quality and character of the members they put on their party lists to go to Parliament (and indeed for all provincial legislatures and municipal councils).

Here we can do so much better — we have in the past. The report quotes an ANC MP, as they withdrew from Parliament (but not the ANC) in 2014.

Some will say the problem lies in the electoral system, where nominees for seats in Parliament are not elected by an inclusive democratic process but are chosen by parties’ murky internal processes. The electoral system has no way to exclude many “bad apples” who parties choose to represent them.

Others will point to the failure of Parliament to include ethical training in the orientation sessions that are made available for new MPs. There may be some MPs who are genuinely unaware of the moral and ethical values in the Constitution which MPs ought to embody.

The action direction identified by the research team is to provide materials to assist parties to name “good people” on their lists, and to exclude people with a past record of dishonesty and self-service. This means discovering and making available relevant information on the character and past performance of those seeking a place on the party lists.

In the longer term, some independent regulation and monitoring of party constitutions seem to be called for. Internal party processes are often intensely problematic, with intimidation, vote-buying and corruption often surfacing. Perhaps this reflects the human condition. Democratic politics is no different from any other. Parties all get captured.

Turok’s aim was to inspire and assist action to make Parliament a more effective, principled and ethical pillar of our Constitution. He wanted Parliament to improve its performance as a check and balance to the activities of the two other branches of government, the Executive and the Judiciary. It will always be the weakest branch, but it can perform its role much better.

In 2019, Parliament gave the AG new powers to act when “material irregularities” are found during an audit, and nothing is done to correct the situation by the accounting officer in the department, by the minister responsible or by Parliament. Basically, the AG can make the accounting officer personally responsible to pay back missing money. Turok was extremely sceptical that the expanded powers of the AG would solve any problems. The process was lengthy and bureaucratic and depended entirely on the strength of other institutions. He wanted a parliamentary process to deal with errant accounting officers and members of the executive. It is Parliament’s role under the Constitution to hold the executive to account. Parliament must do this itself. DM

Dr Martin Nicol is a senior consultant for the Institute for African Alternatives and guest editor of its journal, New Agenda. “Checks and Balances: The Auditor-General Project Report” is available on the IFAA website, https://ifaaza.org

Acknowledgement: The Checks and Balances Project, with its aim of improving governance, received funding support from the Royal Netherlands Embassy. The Institute for African Alternatives (IFAA) is alone responsible for the content of the report.