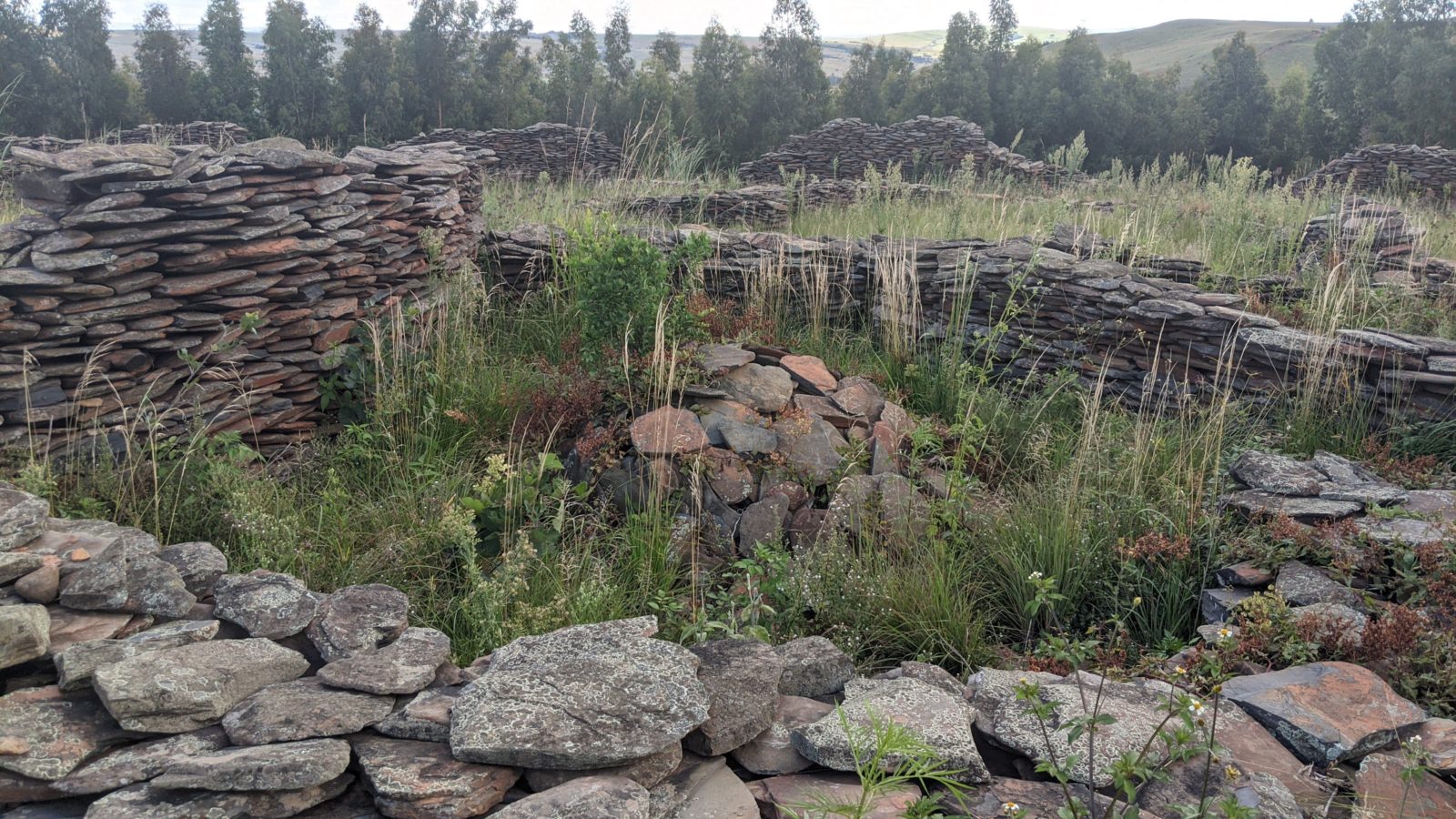 The Stone Circle’s museum has a preference for flamboyant explanations for our heritage over the mundane but vital reality of black Africans’ architectural, mining, and mercantile talent.

Home again. For this Lowveld bushbaby, back in Mzansi for 2021, this means fridge-cooled milk tarts and paper bags of fresh-sliced biltong.

It signifies hadedahs cawing in the sunset, bulbuls playing in the birdbath, and grasshoppers waiting on my bedroom pillow, here in Emgwenya, Mpumalanga.

Sensually speaking, returning home is a magic trick. The past comes to life in all its specific details, as miraculously as dinosaurs in Jurassic Park.

But perhaps my favourite part about returning home is suddenly noticing whole new seams of richness in my childhood landscape.

Take Mpumalanga’s ruins. How often, in my youth, did I drive past the 500-year-old Koni agricultural terraces around Machadodorp, en route to or back from Johannesburg?  Today I see a landscape engineering marvel, reminiscent of the rice steps of the Philippines. But before, I just noticed rolling hills.

As for the old homesteads, the so-called “stone circles” and walled cattle roads that interlace an area stretching from Carolina to Ohrigstad – it’s hard to go for a hill stroll around here without stumbling over an archaeological site that would be both a tourist attraction and the subject of a National Geographic special in most places.

Thus, on a sunny Wednesday, my husband and I pull off the Schoemanskloof road, right opposite a sign for BBK Horse-riding Trails.  Up a short logging road, just to our left, there it is, Blaauwboschkraal, a kind of miniature Great Zimbabwe of towering walls, stone windows, and grassy enclosures. Around 1620 it would have been a homestead for as many as 16 families.

We explored and took photos, beneath an azure highveld sky, our only companions the swallows. I felt a bit like Che Guevara, arriving on his motorbike at a deserted Machu Picchu in the 1950s.

In addition to tours, the museum offers an excellent restaurant, as well as comfortable, self-catering stone cottages.

On a recent Friday we took a museum tour there with a friendly, enthusiastic and clearly well-studied guide, Edwin Chitapi, originally from Gweru, Zimbabwe, about two hours from that nation’s medieval stone capital.

“These artefacts have been donated,” Chitapi informed us.  By way of introducing the importance of the stone circles, he added that stone structures of various kinds are known to cover half a million square kilometres of sub-Saharan Africa, with 200,000km2 in South Africa alone – about 10% of the country’s area.

So far, so good.  The tour, however, began to veer off the tracks when Chitapi got on to the topic of dolerite: according to him, a rock type with unusual electromagnetic properties, such as the ability to attract lightning.  He also claimed it as the source material for many of the world’s great stone structures, like Babylon, Machu Picchu, and Stonehenge.

Now I’m no geologist. But I’m aware that lightning isn’t affected by magnetic fields, but rather tends to strike any high and pointy objects.  Later, I also learned Machu Picchu is mostly built from granite, a much harder igneous stone than dolerite, while Babylon was constructed from mud bricks.

Michael Tellinger’s core thesis, as expounded by Chitapi, seems to be that the Mpumalanga stone circles are much older than 500 years. The museum displays threw around the figure of 70,000 years, the age of the world’s oldest rock paintings, but Tellinger’s website states that Adam’s Calendar, a collection of stones near Kaapsehoop, Mpumalanga that are said to align with Earth’s magnetic field, could be as old as 300,000 years – before the evolution of Homo sapiens.

According to both Chitapi and Tellinger, the original circles weren’t cities or homesteads at all, but rather “energy generating machine[s] creating powerful sound frequencies and electromagnetic fields”.

Evidence for this radical hypothesis seems, it has to be said, at best circumstantial.

A plaque on the museum wall mentions “studies of the erosion patterns on the stone monoliths” at Adam’s Calendar.

Michaeltellinger.com references the “patina growth” on the well-known engravings of the stone circle designs on rocks at Boomplaats Farm, near Mashishing.

Finally, Chitapi showed us a side by side comparison of stone ruins and the modern magnetron, the tube in your microwave oven that transforms electricity into electromagnetic waves.

About all I could say was that yes, indeed the two shapes looked similar.  A thatched doorway seems visually reminiscent of an arrowhead, too, but no one takes the entrance of a thatched cottage in the Cotswolds to be evidence of a Khoisan influence on English vernacular architecture.

Needless to say, no specific experimental evidence was offered for the claim of a pre-human energy grid.

Still, the possibility that Mpumalanga’s stone circles might hold the secret to an ancient, unlimited, carbon-free energy source appears to be one of the founding principles of Tellinger’s Ubuntu Party, headquartered in Boven.

On its website, the Ubuntu Party confirms: “There have been numerous discoveries made by inventors and scientists in South Africa… that can provide extremely cost effective energy.”

Chitapi seemed a true believer, a man who has found a reason both to take pride in his region’s prehistoric prominence at the centre of a global gold mining operation orchestrated by, he eventually revealed, visiting aliens.  Also, a reason to hope for freedom from fossil fuels, printed money, and paid work.

“Oh, we’re going to demonstrate this power source when we can,” he assured me.  “It’s only the banks and the energy companies that are currently blocking us.”

Why couldn’t I get excited with him? Some of it, of course, is that I’m a university lecturer. Decades of teaching undergraduates how to tell the difference between reliable and dodgy sources has given me a sixth sense for when someone is selling me a beautiful fairy tale.

Yet there was more. As I left the gracious hospitality of the Stone Circle museum, other memories now returned to me: Mrs S, in my childhood, talking about Phoenicians sailing up the Limpopo River before the birth of Jesus to construct Great Zimbabwe.

The Stone Circle Museum certainly did not seem consciously invested, like these erstwhile mentors, in denying pre-colonial African skill and leadership, so as to justify colonialism.

Yet the museum’s thesis seemed at least a cousin of those theories, sharing with them a preference for flamboyant explanations for our heritage over the mundane but vital reality of black Africans’ architectural, mining and mercantile talent.

Thus, ideas and prejudices form stone circles, too. They lodge themselves in our psychic geographies, where, repetitive, extensive, ancient, and compelling as they may be, they still can block our view of the real world. DM

Footnote: I introduced myself to them as a writer when I visited and they cooperated with all my queries about the article I told them I was writing until it became clear I did not buy their global pre-human energy grid hypothesis.

Glen Retief’s The Jack Bank: A Memoir of a South African Childhood, won a Lambda Literary Award.  He teaches creative nonfiction at Susquehanna University and is spending a year in South Africa as a Fulbright Scholar.