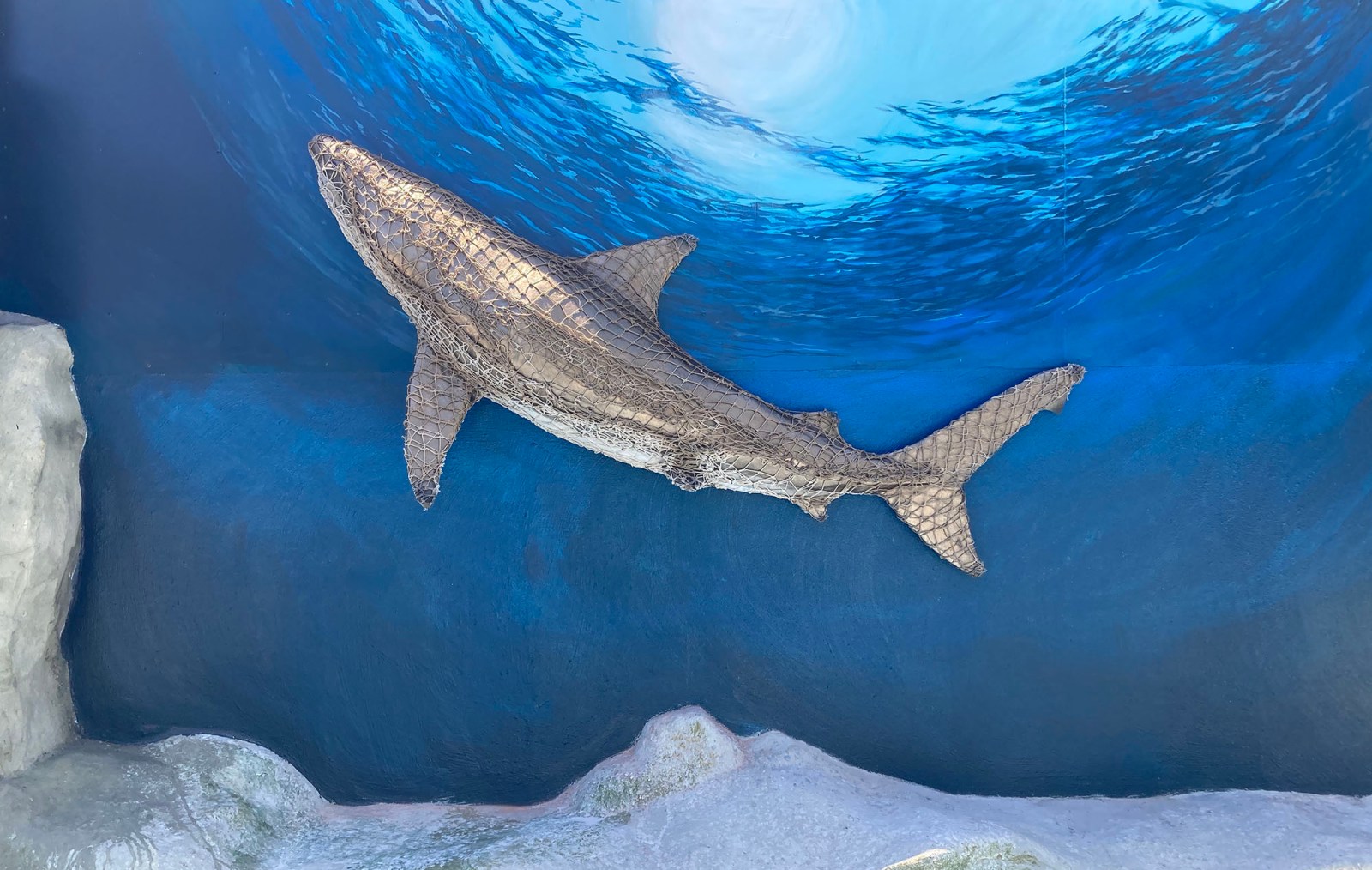 A bronze whaler shark caught in a net. This very special shark sculpture was made from recycled materials, including chip packets and plastic shopping bags. (Photo: SOSF Shark Education Centre)

The Save Our Seas Foundation (SOSF) Shark Education Centre in Kalk Bay aims to invoke awe in its young visitors. It does this by providing an immersive and informative experience to open their eyes to the marine world and the diversity and wonder of its shark species, with a key message that sharks should be more scared of us than we are of them.

When school groups enter the Save Our Seas Foundation (SOSF) Shark Education Centre, across from Dalebrook tidal pool, they are met with a recycling station and a beach scene complete with a facade of the colourful huts that are so characteristic of Muizenberg and St James.

The youngsters get to read the “eco code”, which mentions “manageable things that they can do in their lives, such as collecting rainwater and reusing water”, according to Dr Clova Mabin, director of the centre.

The eco code is intended to encourage eco-friendly behaviour and the sharing of knowledge. Mabin notes that “when your kids call you out on something, it makes you think twice”.

As the kids walk on, they become immersed in an underwater world as depicted in a series of murals. They first walk through the waves into the kelp forest and then into the deeper water.

Eight new shark sculptures made from recycled materials have been installed to increase the “wow” factor, improve awareness about the different types of shark species in False Bay and “show that there is value in recycling, and even items that aren’t typically recyclable might still have a use if you think creatively”, says Mabin.

The centre is “about making sharks cool and getting the kids to realise that they need protection”. The children discover that an average of six people globally are killed by sharks each year, compared to more than 100-million sharks killed annually by people.

“They have a slow reproductive rate. We know that populations can’t recover from the current exploitation rates. And we are going to end up with no sharks.”

The kids learn about the marine food chain and what would happen if sharks were wiped out. Mabin says “most people think all sharks are big, toothy, fierce beasts, and we’re trying to teach them that that is not the case. The majority of sharks worldwide are under a meter in length, and that is quite surprising for most of our visitors”.

The centre has some very cool exhibits showing how awesome sharks are and how these animals function. One of these is the shark head. You put your head inside the shark, grip the handles and have a virtual reality experience.

Mabin explains, “It’s got sound, simulation of smell, and the visual component in the goggles. There is a game built into it… you are the shark, using your senses to catch your prey. You have to keep swimming, responding to indicators which alert you as you get closer to the target.”

Mabin says that pre-Covid-19, many organisations were exploring the use of virtual reality as an educational tool.

“Virtual reality is an amazing way for kids to have an immersive experience in a marine ecosystem without actually physically entering the environment and needing dive experience or equipment.”

But she also cautions that it is very expensive, so there is only one shark head at the centre. With Covid-19 still very much with us, the use of this equipment is temporarily prohibited due to hygiene concerns.

There is, of course, no substitute for the real thing, and a visit to the rocky shore across the road at Dalebrook is a highlight of group outings. Before heading to the beach, the kids are taught, through role play, about the dynamics of life in the intertidal zone.

“The kids pretend to be the animals on the shore. Some represent the waves, and others are the tides, moving their bodies to mimic the changing environment. The ‘wind’ blows over all the creatures holding tight to shore, while the ‘sun’ shines a torch over everyone’s heads. They normally love imagining themselves as creatures or elements in the ecosystem,” she says.

Mabin mentions that in some groups “some of the kids might have been to a sandy beach before, but many haven’t been to a rocky shore”. The visit offers an experiential learning opportunity, where the kids get to learn about and gently touch sea urchins, starfish and anemones.

“Some of the kids don’t want to touch the sea urchins, but they usually all have big smiles on their faces.”

For Mabin, the experience is about “sharing a different side to the beach that they might usually visit for recreation, and allowing for a different perspective”.

“It’s about getting them to fall in love with the marine environment and understanding its worth, with the aim that they want to protect it one day.”

For those kids that visit when the tide is too high, there is a touch pool in the centre where they can see, touch and learn about some of the same sea creatures. There is also a microscope that is used to look at sea urchin spines and tube feet.

“The more immersive experience they can have, the better… from touching shark skins to exploring rock pools and experiencing mind-blowing technology,” Mabin says. Her focus is “finding the awe-factor to develop a passion for these weird and wonderful creatures and this new world that they have just discovered”.

For an even richer marine experience, a group of EcoActive teens from Lavender Hill, Retreat, and Steenberg has been participating in the marine explorers programme at the centre, which sees them snorkelling on the peninsula on Friday afternoons.

Other technology the centre uses to help the kids absorb information is a treasure hunt app on iPads, which are shared by groups working together to find specific information in the exhibits to progress to the next level. Mabin says “the kids love using the iPads, especially when there is a competitive element”.

The latest equipment at the centre is a spherical projection system that consists of an acrylic ball with a projector mounted underneath. Global data such as shark movements, fishing stats and levels of plastic pollution can be projected on to the touchscreen. The equipment is also mobile, so it can be taken to schools for presentations.

While school groups haven’t been visiting due to Covid-19 restrictions, the centre has had time to work on developing exhibits and materials such as their great new activity book aimed specifically at outreach groups from under-resourced communities.

Members of the public can, however, still visit the SOSF Shark Education Centre in small groups between 2pm and 4pm from Monday to Thursday. Booking needs to be done in advance. DM