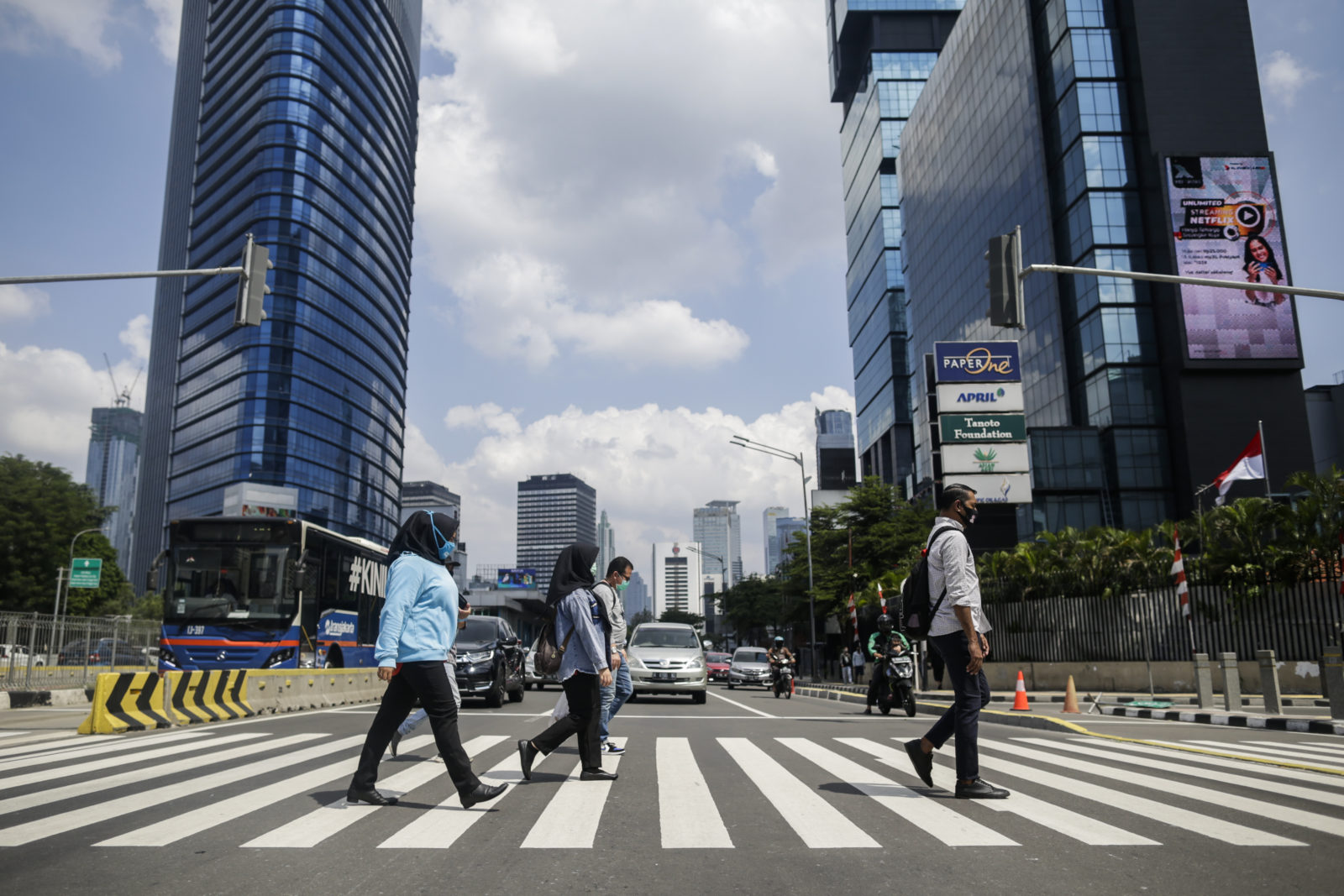 People cross a main street at a business area in Jakarta, Indonesia, Indonesia, 21 August 2020. According to media reports, Indonesia could potentially look at a near-zero economic growth this year as the government is struggling to spend the stimulus budget needed to bring back the economy amid the coronavirus pandemic. EPA-EFE/MAST IRHAM

It didn’t take long for fiscal reality to set in, with public sector unions a keen reminder of the hurdles the government needs to overcome if it is to live up to expectations set in the 2021 Budget. Fortunately, nascent local and global growth tailwinds could provide some uplift.

Immediate reaction to the government’s Budget plans to dig South Africa out of its fiscal hole were positive, with bonds, the rand and equities gaining ground in response to the National Treasury’s precarious balancing act. It gave some tax relief while laying out stringent plans to contain expenses.

However, reality has since set in, with the 10-year government bond losing further ground to 8.99%, a 44.5 basis point increase in yields over the past month, and the rand weakening past the R15 to the dollar level. Contributing to these moves was the rally in the world’s benchmark interest rate, 10-year US Treasury yields, at the start of a new month, with investors finally responding to US Fed chair Jerome Powell’s attempts to calm investors last week.

While it is not an easy task to disentangle how much of the shift in investor sentiment towards South African assets this week has been as a result of local versus global fundamental developments, for now, it appears to be a combination of the two.

Locally, it didn’t take long for the first fiscal stumbling block to appear. This week the public sector unions announced their intention to demand wage increases of CPI+4%, which translates into an 8.2% increase based on the National Treasury’s CPI forecast of 4.2% for the 2021/22 fiscal year. That’s a huge potential problem when so much of the fiscal consolidation relies on no increase in civil servant salaries, which account for a third of total government expenditure.

Absa economist Peter Worthington says the wage demand highlights the implementation risks to the 2021 Budget, “which pencils in a wage freeze for the upcoming three years.” Unions are also adamant that they sign a one-year deal, which would require another tough round of negotiations a year down the line.

Worthington calculates that an increase of just CPI — let alone an additional 4% on top of that — to national and provincial civil servants’ wages would add about R26-billion to expenditure during the 2021/22 fiscal year. That translates into about 0.5% of GDP — a burden on government finances that South Africa can ill afford.

The government’s ability to achieve its ambitious fiscal consolidation targets also relies heavily on the economic growth outcomes over the medium term. Once again, these will be determined by a combination of internal and external factors, with global growth hopefully providing a much-needed uplift to local economic fortunes for at least the next couple of years.

Internationally, early signs are that although the global manufacturing sector, as measured by the JP Morgan Global Purchasing Manager Index, took a dip in February, key developed economies are well positioned to rally thereafter as vaccination programmes continue apace and most Covid-necessitated restrictions are lifted. Thus from a global perspective, it seems we can be cautiously optimistic that the world economy will provide some tailwinds for the South African economy.

The US economy, in particular, is expected to get a significant boost with the likely passing of a $1.9-trillion stimulus bill through the Senate after US president Joe Biden agreed to drop the $15 an hour minimum wage proposal in the package.

On the likely impact of the US stimulus, Old Mutual Multi Managers investment strategist Izak Odendaal comments: “Given that the US economy is already recovering, this massive injection from March should push it back to pre-pandemic activity levels before the end of the year. While this headline improvement hides a huge dispersion among the winners and losers (across households, individual firms and sectors), it is leading to a massive repricing of growth, interest rate and inflation expectations in the bond market.”

Economic growth momentum in China is looking less sprightly, with the Caixin Manufacturing Purchasing Managers’ Index (PMI), an indicator of China’s factory output, declining for the third time in February to its lowest level since May 2020 after lockdown. That shows that the impressive Chinese economic rebound has lost some momentum for now.

It’s important to remember that the economy is still in expansionary territory and some of the decline in the Index can be attributed to the Lunar New Year’s Holidays there during the month. Also, the downward trend in the manufacturing index doesn’t detract from the fact that China is still expected to grow a brisk 8.5% during 2021.

At home, this week’s Absa manufacturing PMI saw the activity in the crucial sector turn the corner in February after softening in late 2020 and January 2021. The Index rose nearly nine points to 52.1, with Worthington explaining that the improvement was likely to be a reflection of the easing of lockdown conditions at the beginning of February and a decline in the electricity power cuts that dogged the sector in January. Now that President Cyril Ramphosa has announced a further easing of restrictions to Level 1, further improvements in the manufacturing sector may well be forthcoming in the next PMI Index.

Local economic conditions are improving slowly. But there’s no doubt the fiscal challenges that lie ahead for South Africa will continue to be the swing factor in South Africa’s fortunes — even if global developments do provide us with much-needed tailwinds this year. BM/DM